Ian Sykes and Brian Fitzpatrick had started XL. They apparently built XL’s Fawkner outlet themselves, “helped by an Italian who knew nothing about concrete”, Fitzpatrick told university students in 1969, including the writer.

Half a century later, Ian Grant Sykes unexpectedly died in The Alfred hospital on June 4, 2020, after a heart attack. He was born in England to Gladys Edith Sykes (nee Grant) of Melbourne, and Norman Sykes, of Sale, Cheshire. A Melbourne University graduate, Gladys was a mathematics teacher.

Norman was a Royal Flying Corps fighter pilot late in World War I, whose cohort was leaving for Flanders as the armistice was declared. Norman became an aircraft designer for AV Roe (later Avro) at Woodford, near today’s Manchester airport and Sale, Norman’s hometown. Ian Grant Sykes was the second child of three; an elder brother had died in infancy. Ian and sister Leila attended school in Sale. He recalled damaging Nazi bombing raids nearby and otherwise carefree days.

The family battled horse-drawn technology, weeds, rabbits and low returns, and Ian and Leila attended Sheffield Area School, before Gladys relocated them to East Devonport. Early in 1954, after Gladys’ unexpected death from a penicillin allergy, Ian boarded with a local family and matriculated at Devonport High School. Norman worked in a canning factory and did odd jobs.

Ian completed science, economics and commerce degrees at the University of Melbourne. Bob Braby observed Ian simultaneously monitoring The Age financial pages and blackboard and decided “he was made for the financial world”. Lodging at International House, during vacations Ian worked for BHP in Newcastle, impressing management with his ability.

With currency reform a passion, Ian relished working with Australian Decimal Research Organisation in the late 1950s and early 1960s. Travelling around Australia addressing Rotary clubs and the like explaining its benefits, he was an economical evangelist, hitchhiking wherever possible, otherwise using public transport, and staying in provincial boarding-houses. Thumbing rides challenged punctuality, but he was never once late. Australia finally decimalised in February 1966.

After selling XL in the 1980s Ian followed closely the US and Australian sharemarkets. His rather difficult book discussed a three-dimensional number system and its connection with language. Bob Braby says: “Inness Word and Number; the Enumeration of Life and Its Language was 450 pages, but I didn’t get past page two.” Bob remembers Ian’s independent Senate bid. “He proposed devaluing the Australian dollar. I wondered how many votes that would bring!”

Ian invested some $17 million on exploration, mainly in Queensland, drilling 14 wells. He struggled at length with the Queensland government over his Surat Basin mining lease, having discovered gas there in 1983, possibly Australia’s largest onshore field. One well, apparently the state’s deepest, exceeded 4000 metres.

During a controversial Brisbane court case in 2008, Ian travelled back and forth by bus and represented himself. The Herald Sun indicated he had already won three landmark High Court cases: against Shell and Caltex, and former MP Phil Cleary over a constitutional matter. The Queensland government, claiming non-compliance with drilling requirements, cancelled the lease, eventually gaining over $250 million from its subsequent auction.

Using methane and coal mined nearby, he proposed a refinery employing South Africa’s SASOL process, claiming it could produce synthetic petrol and diesel for 40-60 cents a litre while paying $30 a 100 cubic metres of methane. His Xyloleum section equated to $2.7 billion in well-head sales. Alternatively, selling to power stations at a lower price for “wasteful” electricity generation, would still have realised $680 million.

He put mining technology and politics behind him in the late 1990s, moving to public housing off Montague Street, South Melbourne. For more than 20 years he carefully traversed its streets on his faithful bike, his sturdy and capacious trailer laden with diverse grocery items, for he was a hunter-gatherer and dumpster-diver. He unobtrusively ran an informal Sunday market behind a church, largely selling out-of-code foodstuffs.

He continued to study numbers and language. Deploring waste, he lived off the grid, growing some of his vegetables and fruit. He joined and enjoyed various social groups and many local friends attended his funeral.

Janine, Mark and Louise, Ian’s three children with the late Yvonne de Savery, and Mark’s family of four, survive him, as does sister Leila in Perth and her three offspring. Happily for Ian, two years ago Janine came to stay. She has many comforting insights and memories of her highly intelligent and colourful father.

Meanwhile, as you travel internally over the next months and years, visit Sykes Sanctuary, Railton, in northern Tasmania. Ian helped finance this pleasant reserve and had numerological symbols prominently etched on stonework features. 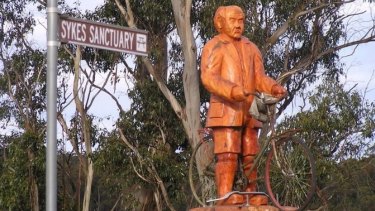 Norman Sykes lived his last years in this bush patch. Railton acknowledges him with a nicely carved wooden statue of him astride a rickety bike – perhaps his original machine. With Janine de Savery