Australia is to send two guided missile frigates, HMAS Adelaide and HMAS Darwin, and the replenishment tanker, HMAS Success, to join the international blockade against Iraq in the Persian Gulf. 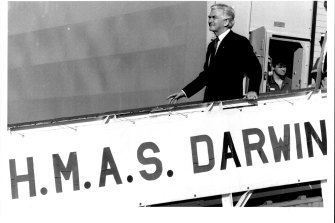 Bob Hawke farewells troops heading to the Gulf aboard the HMAS Darwin.Credit:Palani Mohan

The ships, with a total complement of 600 sailors, are scheduled to arrive in the Gulf by 1 September. The Prime Minister, Mr Hawke, announced Australia's contribution to the United States-led multi-national taskforce after a 30-minute telephone call from the US President, Mr Bush, early yesterday.

The primary role of the Royal Australian Navy force will be to help enforce the blockade on Iraq and Kuwait and protect shipping from other Gulf States, but Mr Hawke would not rule out the possibility of Australian involvement in warfare.

The Maritime Commander for Australia, Rear-Admiral Ken Doolan, said yesterday that Australia's navy was prepared to defend itself against attack by Iraqi forces, and would go "in harm's way" if necessary to make sure the blockade of Iraq was successful.

Admiral Doolan said Iraq had a strong airforce and an attack from the air was the most likely. However, a surface attack could not be discounted because Iraq now had the surface craft and weapons systems that were previously part of the Kuwaiti forces. 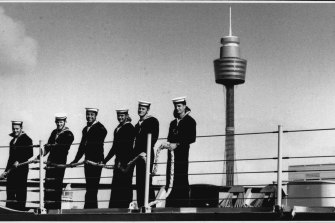 Sailors on the deck of the Darwin as the ship pulls out.Credit:Steven Siewert

"The most dangerous thing in any area of risk is the uncertainty," he said. "Clearly the forces of Iraq … are quite substantial and our ships have to be prepared for anything Iraq could put against them should that eventuate."

During passage from Sydney to Western Australia the frigates will be involved in a series of extensive exercises to ensure they are at their "peak of operational efficiency", Admiral Doolan said.

The Navy announced late yesterday that it was replacing the commanding officer of the Darwin on the trip to the Gulf pending a court martial. This follows the grounding of the Darwin in May during naval exercises with the US Navy in Hawaii.

Captain Brian Nye has been appointed to a shore-based posting together with the ship's executive officer. The new commanding officer is Captain Russ Shelders.

The Australian force is the first to be offered from outside the US and Europe. Beside the US forces, Britain, Holland and Italy have already offered direct support. 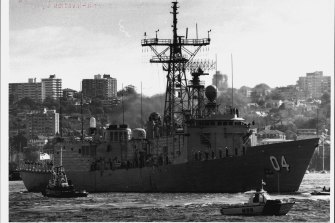 Mr Hawke said he had spoken to the Canadian Prime Minister, Mr Mulroney, and Canada was considering the matter. It was likely after a NATO meeting in Paris last night Australian time that some European nations would be involved.

He said that Japan could contribute to the force, a matter he said he had discussed with Mr Bush.

New Zealand's Prime Minister, Mr Palmer, said yesterday that New Zealand may examine options other than sending frigates if asked to assist in the Gulf.

Australian forces were committed for the duration of the blockade, Mr Hawke said.

The decision has been supported by the Opposition Leader, Dr Hewson, and by a senior ALP backbencher influential in defence and foreign affairs matters, Senator Chris Schacht.

Asked his response to Australia's decision to send the frigates to the Gulf, the Iraqi ambassador, Mr Afif Issa Al-Rawl said: "You must ask yourself. You are far away from our country. Why (do) you send the frigates?"