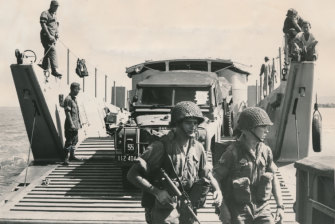 Nui Dat (South Vietnam), November 7 – Australia’s combat role in the Vietnam war ended today when 1100 men of the 4th Battalion withdrew from Nui Dat which has been the main Australian base in Vietnam for five years.

The entire base was turned over to the South Vietnamese army just before midday. 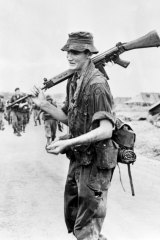 A Digger in the field during the Vietnam War.Credit:Stuart MacGladrie

The 4th Battalion – Australia’s last combat troops in Vietnam – travelled by road convoy and airlift to the beach resort of Vung Tau where they will prepare for their return to Australia early next month.

Most of the troops are due home by Christmas. Since the withdrawal was announced in August, more than 2500 men have left for Australia.

In Canberra, the Minister for Defence (Mr. Fairbairn) said the withdrawal had now reached an important stage.

He said the main elements which had moved to the coastal logistics base at Vung Tau were the 4th Battalion, Royal Australian Regiment / New Zealand (Anzac), 104 Field Battery, Royal Australian Artillery, and a troop of A Squadron 3rd Cavalry Regiment.

Before their departure for Australia, the units now in Vung Tau would be primarily concerned with administrative preparations for their return.

The 1st Australian Task Force had now absorbed the 1st Australian Logistics Support Group. The remaining force would concentrate on the preparation of vehicles and packing of stores for movement to Australia.

On Saturday, HMAS Sydney left Vung Tau with elements of the force, vehicles and equipment to return to Australia.

Sydney’s journey would take a couple of weeks and arrival details would be made known in time for relatives and friends to greet them.

In addition, up to 300 men were returning each week by air.