Miss Shrimpton and friend, screen actor Terence Stamp, were rushed to the course from Melbourne Airport when they flew in from Sydney. 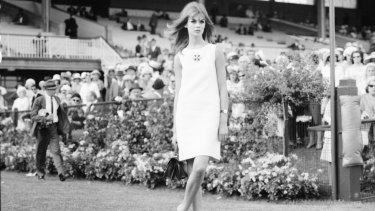 In a plain, white sleeveless shift, its hemline a full four inches above the knee, Miss Shrimpton drew appreciative stares wherever she went on the course.

Miss Shrimpton is the guest of the Victorian Racing Club for the spring carnival Fashions in the Field competition.

The spotlight of much overseas attention is focused on Melbourne, its racing, and the current fashion furore – “and it’s all a good thing.”

This is the opinion of people concerned with publicity of Melbourne and of its Cup. 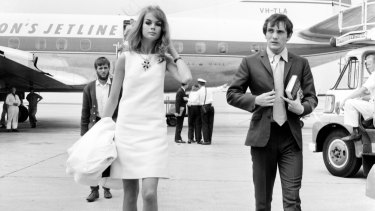 British newspapers have taken up the story, commenting on Melbourne's fashion tastes and the taste of the young woman who started it all, English model Jean Shrimpton.

The latest word in the costume controversy was left to a Melbourne designer, who said in London yesterday that Miss Shrimpton was "very pleased" with a range of knitted dresses she had left behind for the model to wear.

The chairman of Melbourne's Civic Committee (Mr. Rupert Steele) said yesterday: "This is really putting Melbourne and Australia on the map.

"We are getting great publicity throughout the world," he said. At the same time, top Melbourne fashion designers scoffed at suggestions that Melbourne's fashions were outdated.

And one, Miss Norma Tullo, sided with Jean Shrimpton, who, wearing a simple shift without stockings and accessories caused a sensation at last Saturday's Derby meeting.

The Jean Shrimpton look — with its skirt four inches above the knee — had been worn by fashion-conscious women in Melbourne for some time, Miss Tullo said.

"It is nothing new here," she said.

"The outfit she wore at the Derby was completely her, and I think she looked lovely.

"People should dress as they feel. Miss Shrimpton, with her beautiful face and figure, looked lovely and young, and I loved her look."

In London, Miss King said: "The latest Australian look is very young, very feminine. It is a great look." 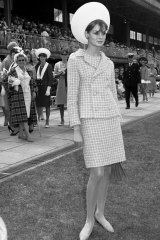 Jean Shrimpton at the Melbourne Cup in 1965Credit:The Age Archives

Miss King had flown In from New York, where she had considerable success with a range of dresses she designed.

New York stores, like those in Hong Kong and London, were selling the Australian look.

Melbourne's designers, however, agreed with the comment by fashion expert Mrs. Chesney Frost, in London, that some women at Flemington races dressed up like Christmas trees.

The president of the Melbourne branch of Intercoiffure, a world-wide organisation concerned with fashion standards (Mr. Raymond Millward) said last night: "We were astounded, not with Miss Shrimpton's short dress at the Derby on Saturday, but at the way she flaunted convention by not wearing stockings and accessories.”

“Fashion-conscious women in Melbourne know what is going on in the world of fashion and have been wearing dresses from four to six inches above the knee for a long time," he said.