The Stanley Cup playoffs start Monday and the biggest question is whether the Tampa Bay Lightning can become the first team since the 1980s New York Islanders to win three Stanley Cups in a row.

At times, it looked like the answer might be no. They had a 2-6 slide in March and lost four in a row in April. Nikita Kucherov had one goal in 15 games and Steven Stamkos had an eight-game goal drought. Goalie Andrei Vasilevskiy wasn't as dominant.

Now, they appear to be heading in the right direction, winning seven of their final nine games, routing first-round opponent Toronto and ending the Florida Panthers' 13-game winning streak. Kucherov scored 23 points in that stretch, including an eight-game goal streak, and Stamkos scored 26 points to top 100 points for the first time.

SPORTS NEWSLETTER: Sign up now for daily updates sent to your inbox

With trade deadline acquisitions to rebuild their third line, the Lightning remain a danger in the playoffs.

Here is one question for the other 15 playoff teams:

Can Nazem Kadri have an incident-free playoffs? 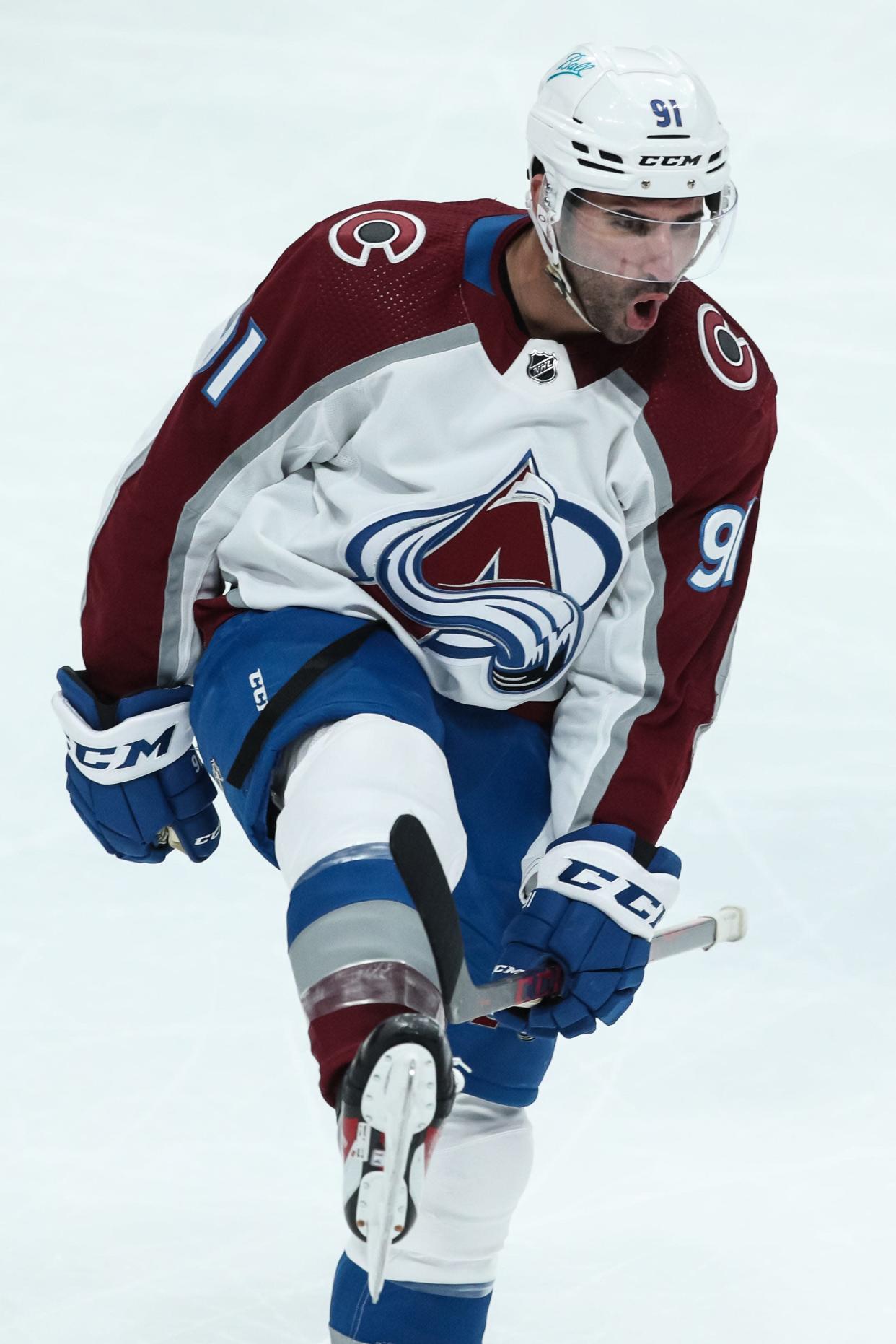 He has been suspended in the first round in three of the last four playoffs, including eight games last season for a check against Blues defenseman Justin Faulk. The Maple Leafs traded him after his second suspension. Kadri is an unrestricted free agent and has a career high in assists and points. A suspension-free, productive postseason could lead to an even bigger payday. Expect him to play with an edge but not cross it.

Is this Johnny Gaudreau's last season in Calgary?

The Flames and Gaudreau's camp have said little publicly, but general manager Brad Treliving told Hockey Night in Canada After Hours in April that he would "move heaven and earth" to bring back the unrestricted free agent, who recorded a career-best 115 points this season. Gaudreau is from the Philadelphia area, but the Flyers are rebuilding. Calgary will give him a better chance at a Cup. The Flames also have to re-sign restricted free agents Matthew Tkachuk, Andrew Mangiapane and Oliver Kylington.

How will they split their goaltending?

The Wild can't go wrong with newcomer Marc-Andre Fleury or Cam Talbot. But they didn't acquire Fleury, a three-time Stanley Cup champion, to be a backup. He started four of five games down the stretch. Last year, Fleury started 16 of 19 playoff games for the Vegas Golden Knights, but he's 37, so a more even split could happen. Coach Dean Evason isn't announcing his Game 1 starter.

Is this team better than the 2019 champions?

Yes, that team had one 70-point scorer and three 50-point scorers. This one has four and eight, respectively. Robert Thomas, Jordan Kyrou and Ivan Barbashev have bigger roles. Offseason acquisitions Pavel Buchnevich and Brandon Saad are thriving. Defensemen Alex Pietrangelo and Jay Bouwmeester are gone, but Torey Krug, Faulk and Nick Leddy are playing well. The big difference is 2019 goalie Jordan Binnington has been up and down this season, but Ville Husso has been solid.

Can they make up for last season's playoff disaster?

Connor McDavid and Leon Draisaitl were shut out in the first two games of the Winnipeg Jets' eventual first-round sweep. The Oilers have added Zach Hyman (27 goals) and Evander Kane (22 goals in 43 games), meaning the team doesn't have to put its superstars on the same line. The coaching change helped. Jay Woodcroft is 26-9-3 since replacing Dave Tippett. The last three Finals have featured a team that made a midseason coaching change.

Can they send Dustin Brown out a winner?

Brown, an 18-year veteran, will retire after the playoffs. Will the Kings win another Stanley Cup? Probably not, even though there's a good mix of youngsters and veterans. But Brown will retire a winner. He had an impressive career that includes leading the Kings in career regular-season games and serving as captain from 2008-09 to 2015-16, including the team's two Cup wins. His number will be retired eventually.

Has Juuse Saros played too many games?

Saros played 67 games this season, picking up 38 wins. But he recorded 13 sub.-900 games in his last 29 games. He didn't play the last two regular-season games because he limped off the ice in the third period on April 26. If he's unavailable for Game 1, David Rittich would get the call.

Do the Stars have another surprise run in them?

The Stars reached the Final in the 2020 bubble and they're facing the Flames again in the first round. But another run seems unlikely this time. They're essentially a one-line team (a very impressive line) and Calgary is much better this year. Goalie Jake Oettinger might be able to steal a game or two, but a first-round exit is likely. 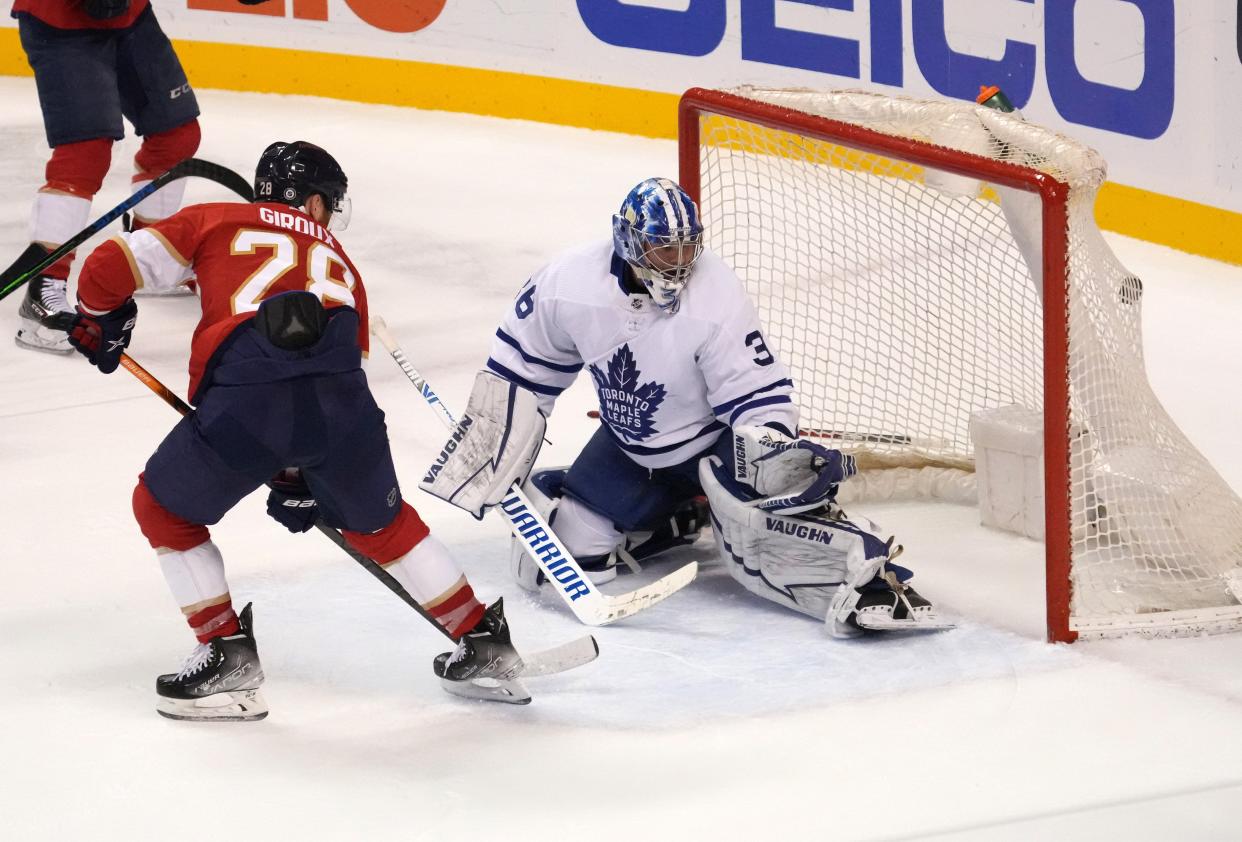 The former Flyers captain made a solid choice on where to go when waiving his no-trade clause, picking up 23 points in 18 games. The Panthers have been aggressive in remaking their forward lines since the 2021 trade deadline. With injured defenseman Aaron Ekblad expected back, they're one of the top contenders.

Can they finally get past the first round?

They haven't done that since 2004 and have to face the Lightning, who routed them 8-1. Though the Maple Leafs were unable to upgrade their goaltending at the trade deadline, they added defensemen Mark Giordano and Ilya Lyubushkin. Plus, Auston Matthews scored 60 goals. He had three goals and seven points in three games against the Lightning.

Do they have enough playoff experience?

New York has a lot of younger players, but it brought in playoff veterans. Barclay Goodrow won two Cups. Coach Gerard Gallant went to the 2018 Final with Vegas, and Ryan Reaves was on that team. Justin Braun went to the 2016 Final and Andrew Copp went to a conference final. They join Chris Kreider, the last Ranger left from the 2014 Final team.

Will the power play get back on track?

The Bruins had no power-play goals in 12 games before scoring three in their final two games. Forward David Pastrnak and defenseman Hampus Lindholm were injured for a big chunk of that time, so their return should help. Hurting their cause: The Hurricanes have the top penalty kill in the league.

Is this the last of the Big Three?

Sidney Crosby, Evgeni Malkin and Kris Letang won the Stanley Cup in 2009, 2016 and 2017. Malkin and Letang are unrestricted free agents this summer. It's possible one won't be back, especially with the Penguins also needing to re-sign Bryan Rust. The Penguins, meanwhile, will enter the playoffs without No. 1 goalie Tristan Jarry for at least a couple games, coach Mike Sullivan said.

How effective will Alex Ovechkin be?

He missed the final three games with an upper-body injury after tripping and slamming into the boards. He has been practicing and has never missed a playoff game. Asked Sunday whether he would play in Game 1, he said, "We'll see." But he added that he could have played last week had it been the playoffs. The team is 1-4 without him in the lineup this season.

This article originally appeared on USA TODAY: NHL playoffs 2022: One question for each team on road to Stanley Cup