Thrilla in Manila! Skyscraper climber dubbed ‘the French Spider-Man’ conquers 712ft GT Tower in Phillippines capital with no safety gear – before being arrested by police on the ground

‘The French Spider-Man’ has conquered another skyscraper with no safety gear – this time a tower in the Phillippines.

The 56-year-old daredevil was seen dangling several stories above rush hour traffic as he made his way up the 712ft (217m) structure in nerve-shredding footage. 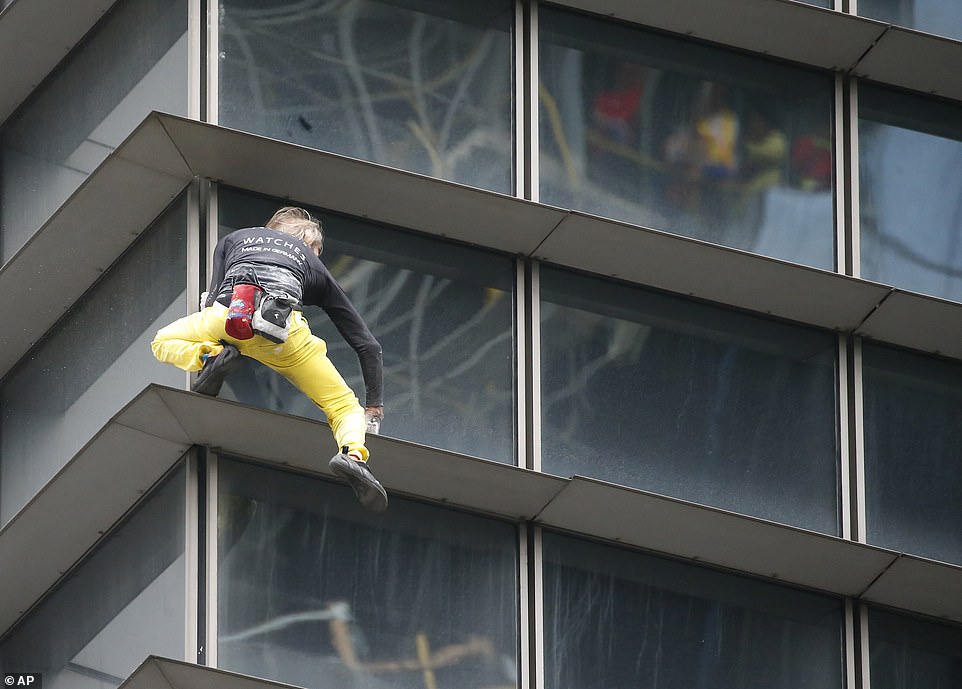 The French Spider-Man Alain Robert hoists himself from one ledge to another as he conquers the GT Tower in Manila, the Phillippines, this morning 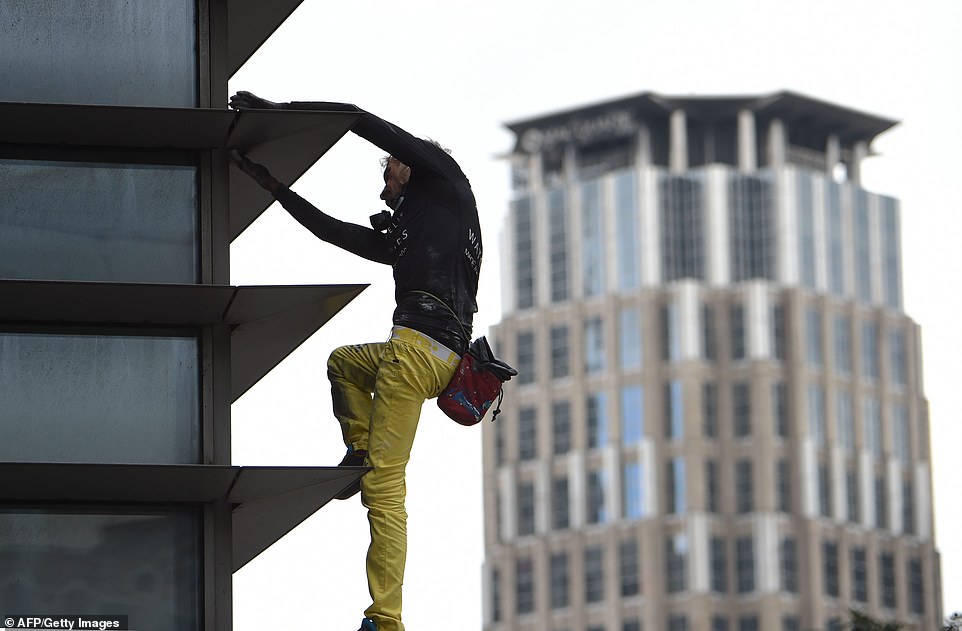 The urban climber shows incredible strength and athleticism to drag his body up the structure gripping thin, slippery ledges 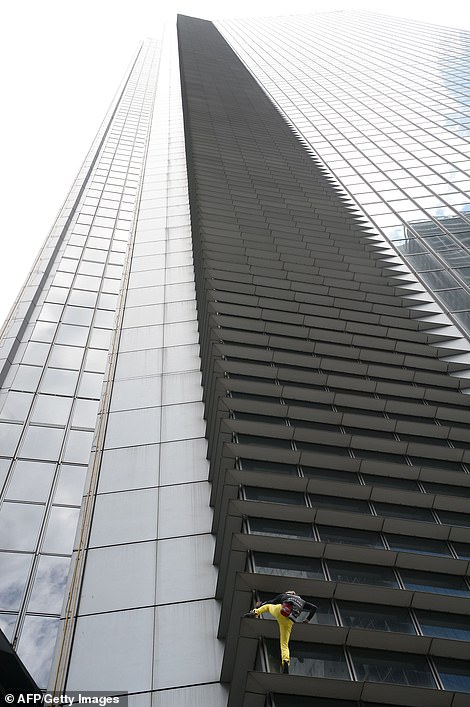 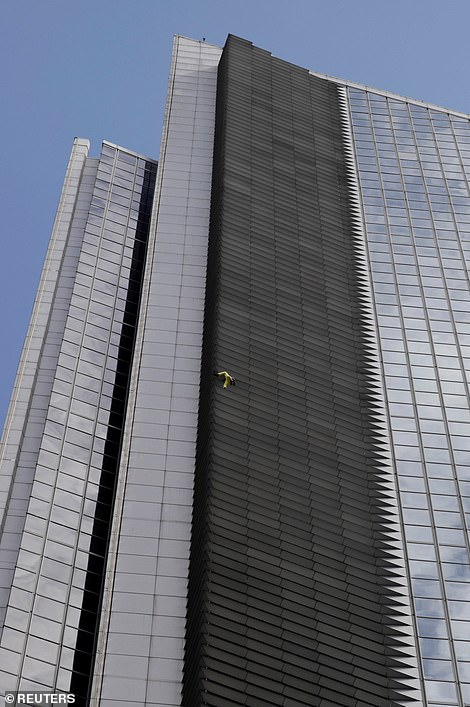 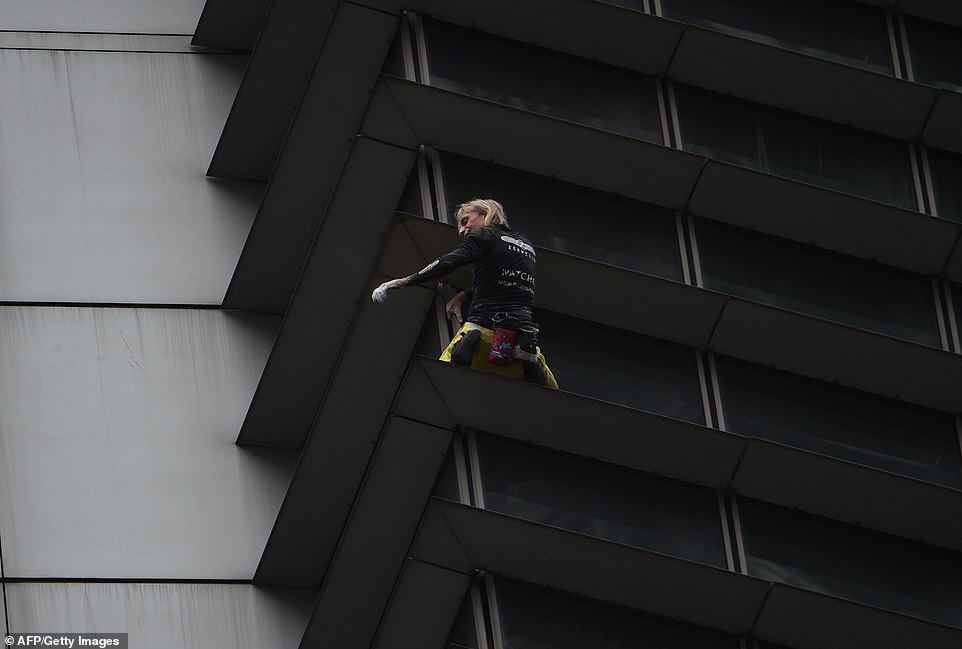 The illegal ascent of the 47 stories tower was with no safety gear, without a rope and with bare hands. Here his hands are covered in chalk to help him grip the slippery ledges

The illegal ascent of the 47 stories tower was with no safety gear, without a rope and with bare hands.

The Frenchman was seen descending from the all-glass structure shortly before 12pm and was arrested by police when he got to the bottom.

Officers local media the stuntman may be charged for breaking city ordinances.

Mr Robert is in prime condition – he is 5ft 5in and weighs about 7st 12lb (50kg), with a low fat ratio of bones to muscle which helps his extreme athleticism and skill. 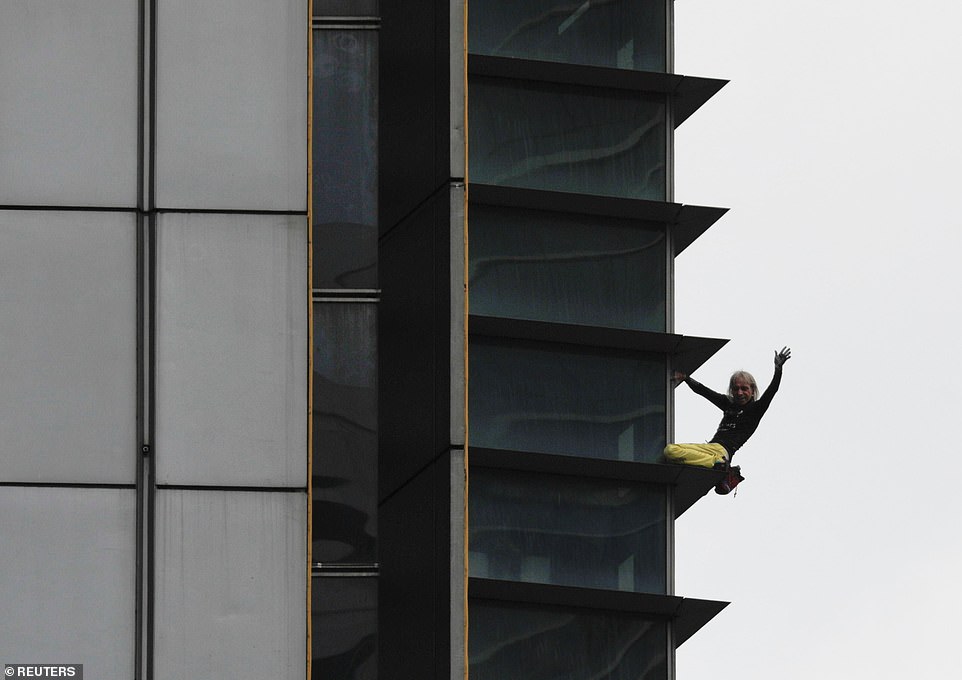 Don’t look down! The fearless climber – who holds the world record for buildings scaled – waves as crowds gather beneath him to watch his stunt 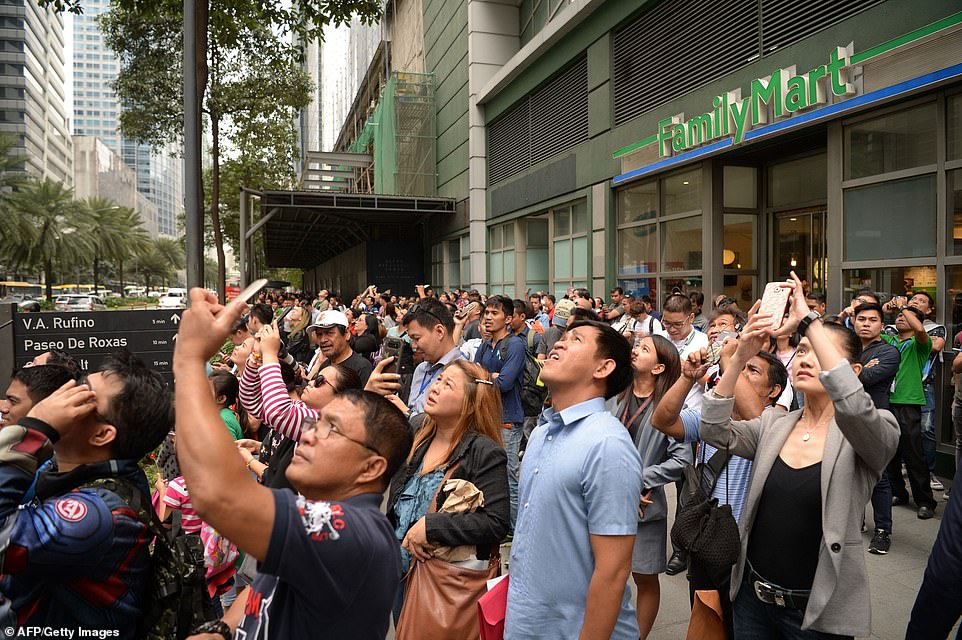 As with other unlawful climbs, he is as ‘always’ carrying his passport in a chalk bag ‘because it is very reassuring for the authorities’ when he is arrested.

Chalk slightly improves the friction between his skin and the building but he also tapes his fingers and wears wafer-thin gloves to try to stop them being shredded by the ‘aggressive’ building.

The ‘Human Spider’ has been climbing buildings since he was 11 and was recognised by the Guinness World Records for ‘most buildings climbed’ after scaling 121 structures in 2015.

He said his lifestyle ‘isn’t easy’ for him or his family and there are many members of the public worldwide who condemn him. 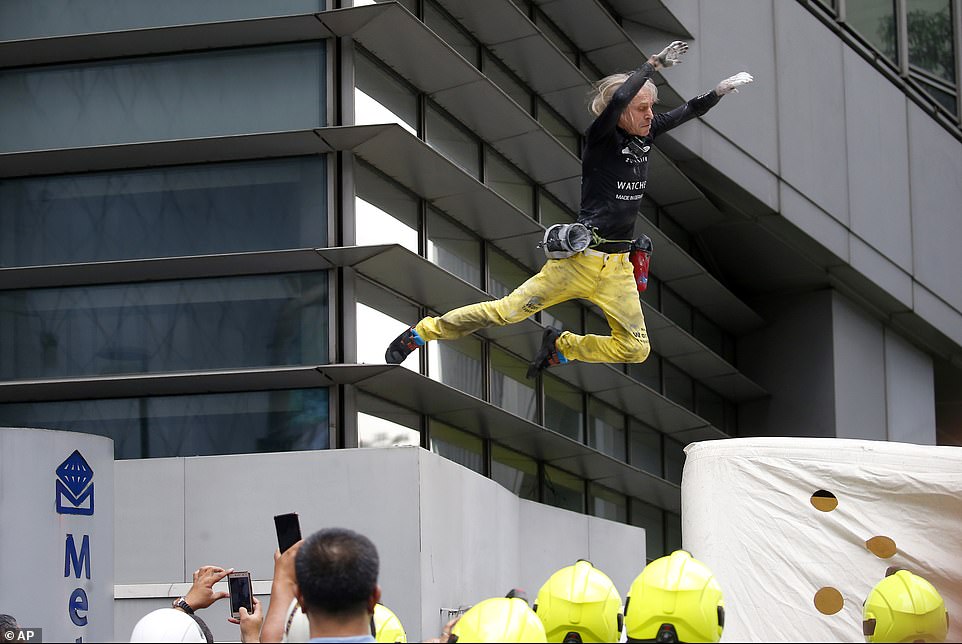 The Jumping Spider! Robert leaps onto a fireman’s inflatable chute after descending from the building – as police wait to arrest him on the ground 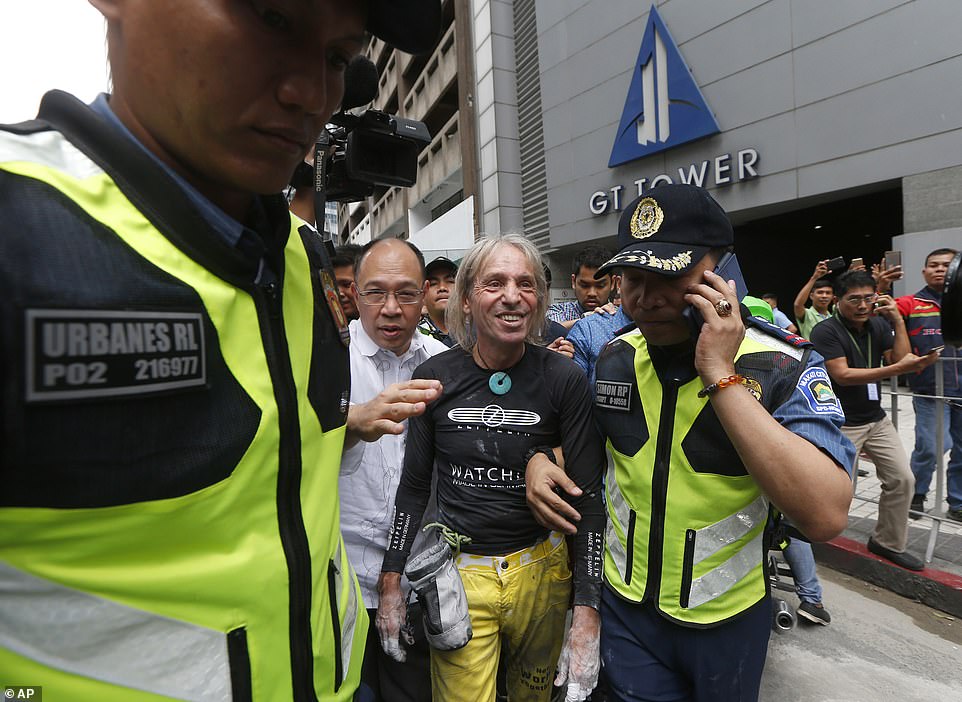 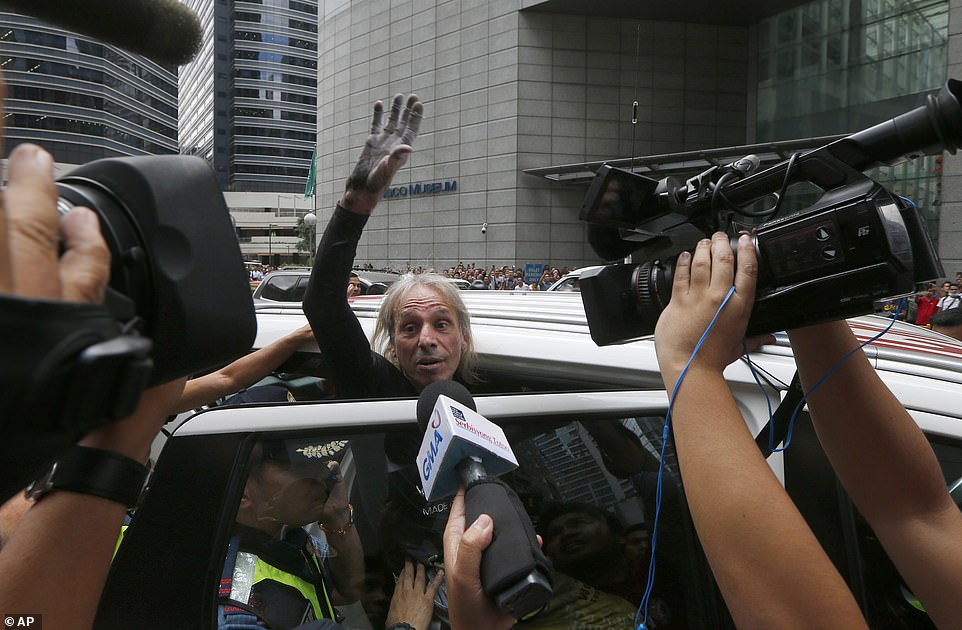 Speaking after a climb in London last year, he said: ‘It is never easy for family having a dad who is doing that kind of stuff but they are used to it. They never asked me to change my lifestyle.

‘They trust me. They think I am capable to succeed each time I am doing something, but at the end of the day it is still a bit scary for sure. They are proud.’ If you knew the number of people who are happy to meet me.

‘For most of the people I am an inspiring person. I am receiving a lot of messages saying I am such a legend.’

The French Spiderman’s most incredible climbs (without a harness)

Mr Robert has climbed landmarks including the Burj Khalifa (2011), Eiffel Tower (1996), the Sydney Opera House (1997) and the Montparnasse Tower (1995) as well as other of the world’s tallest skyscrapers. 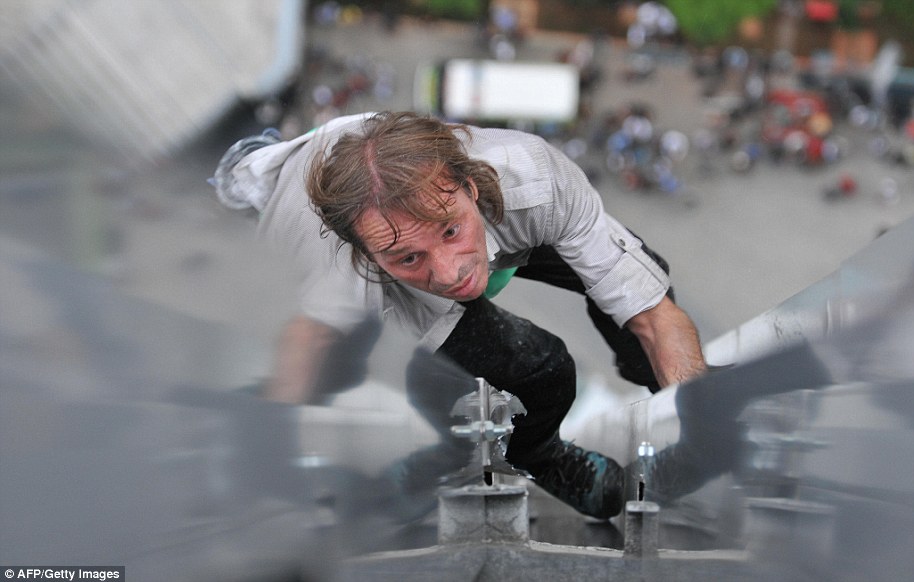 In 1997 he climbed the Petronas Twin Towers in Kuala Lumpur, Malaysia but was arrested at the 60th floor, 28 floors below the top. He tried again in 2007 to mark 10 years since his previous ascent but had to hand himself in to the police on the 60th floor. But in 2009, he reached the peak of the 88-storey tower. 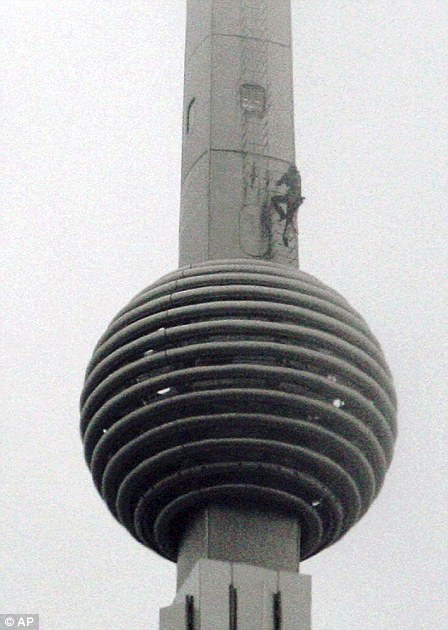 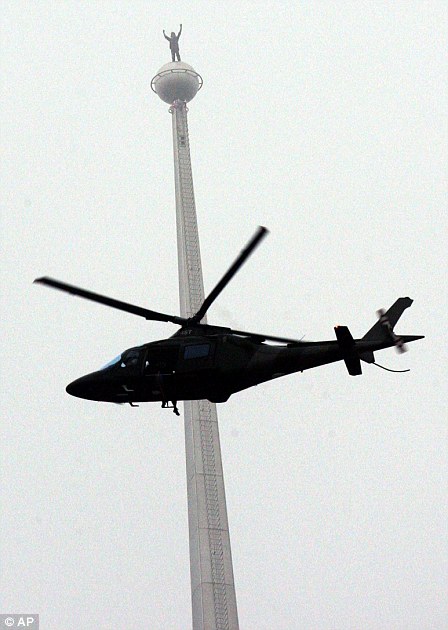 Alain Robert climbing the Petronas Towers in Kuala Lumpur in Malaysia in 2009. He previously attempted two climbs on the landmark in 1997 and 2007 but was arrested both times whe

In 1999 he climbed the Sears Tower in Chicago, the second man to do so after Dan Goodwin. 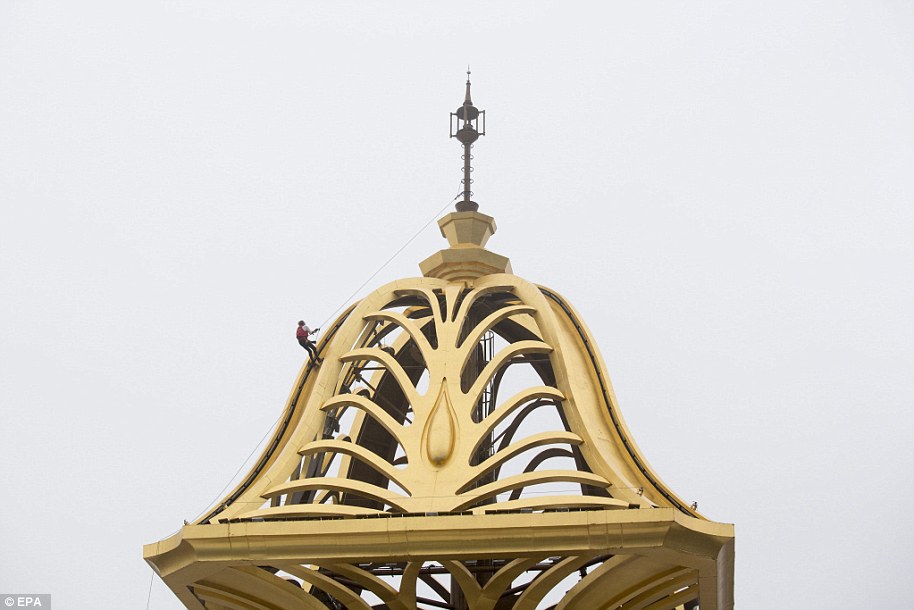 Alain Robert climbs the cupola above the 153-metre tall Galaxy Macau’s East Tower in Macau, China on 23 April 2014 to promote  Robert the launch in Macau of the Hollywood film The Amazing Spider-Man 2 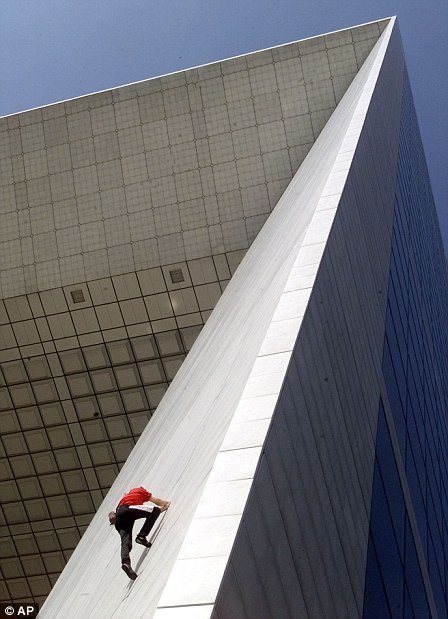 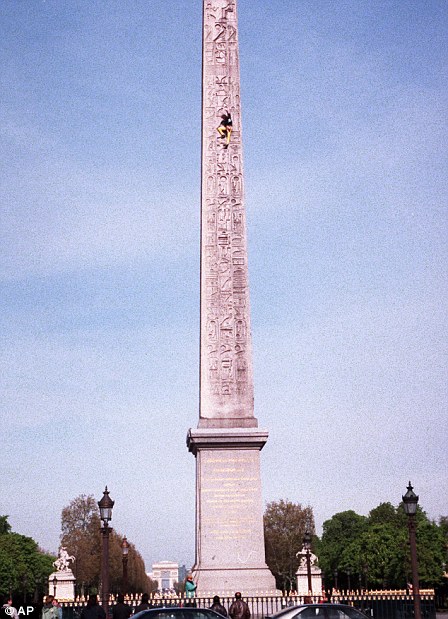 Mr Robert has had seven falls in his life which have resulted in fractures and him needing stitches with the highest fall being from 15 metres (49 ft).