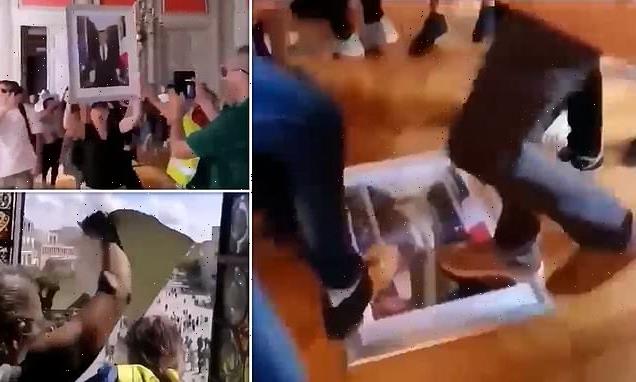 Macron portrait torn to shreds by the mob: Moment French anti-lockdown protesters in Poitiers City Hall stamp on the President’s picture before it is ripped up and thrown to the crowd below

A crowd of protesters stamped on a portrait of President Emmanuel Macron and tore it up after storming a city hall on Saturday.

Around 700 people had gathered in the western city of Poitiers for a demonstration against France’s new vaccine passport system when several dozen overran the government building.

Under controversial new measures introduced by Macron, proof of vaccination is required to travel long distances, and will soon be needed to enter bars, restaurants and cafes.

Footage of the chaotic scenes shows the mob stamping on Macron’s portrait before tearing it up and throwing it out the window as a crowd outside cheers.

A man is seen holding the framed portrait aloft before he and a crowd of others surge to hold it outside an open window.

The clip cuts to several people stamping on Macron’s portrait, breaking the glass, before the picture is ripped from the frame and torn up in view of the crowd outside.

The pieces are thrown out the window to the cheering crowd below.

The doors of the building were open for a wedding at the time of the protest, Le Nouvelle Republique reported. 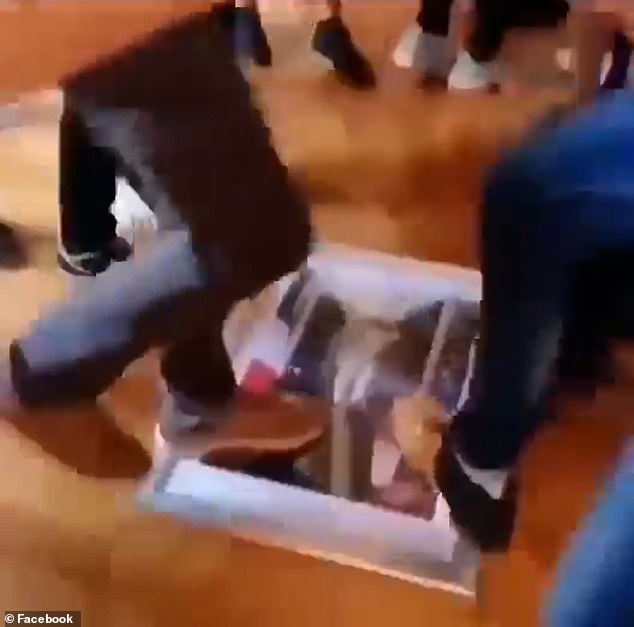 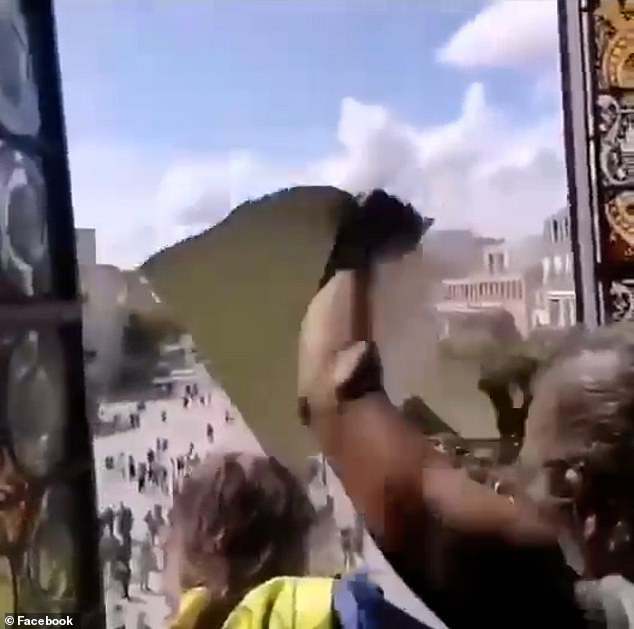 Around 700 people had gathered in the western city of Poitiers for a demonstration against France’s new vaccine passport system when several dozen overran the government building. Pictured: Protesters hold a portrait of Emmanuel Macron out of the window of Poitiers town hall

The mayor of Poitiers, Leonor Moncond’huy, condemned the protesters, which she said had also assaulted a municipal agent.

‘I strongly condemn the degradation of the Town Hall of #Poitiers and the assault of a municipal agent on the sidelines of the demonstrations that day,’ she wrote in a Twitter post.

‘Freedom of expression must be exercised with respect for the rule of law and for individuals, and cannot justify any violence.’

‘Insults, death threats, shameful comparisons, invasions of public places, portraits of the president torn. France of Pasteur, the city of Descartes, is ashamed of these individuals who denounce dictatorship while adopting [its] customs,’ he wrote on Twitter.

Two men were arrested on Saturday, one suspected of having stolen a tricolor was released, France Bleu reported.

A 52-year-old man was on Monday handed a 15-day suspended prison sentence for destroying the portrait of Macron, the outlet said. 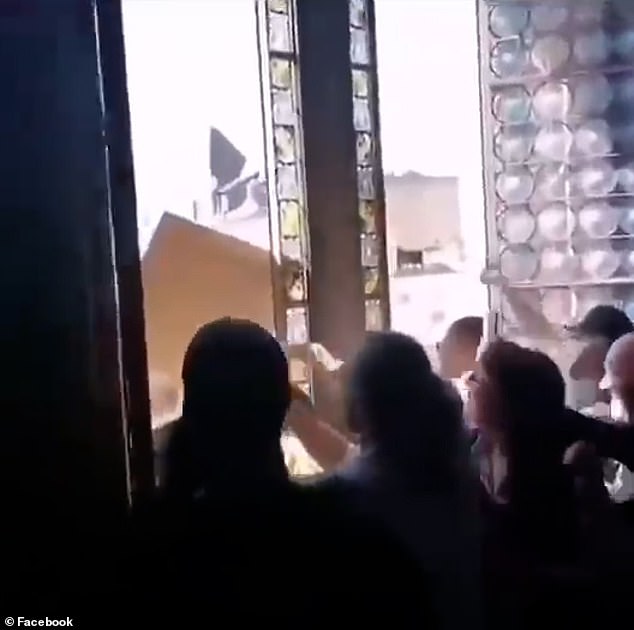 The man, a father with a clean criminal record, was also given a probationary period of five years.

He admitted to destroying the portrait and told a Poitiers court that he ‘regretted’ his actions, which he blamed in part on ‘the crush, the crowd movement, the hubbub, the complicated year of 2020, the health pass and the threat of no longer being able to go to a restaurant.’

The man’s lawyer later said he had ‘learned the lesson’.

Smaller protests against the health passport also took place in Niort, Bessines and Melle on Saturday. 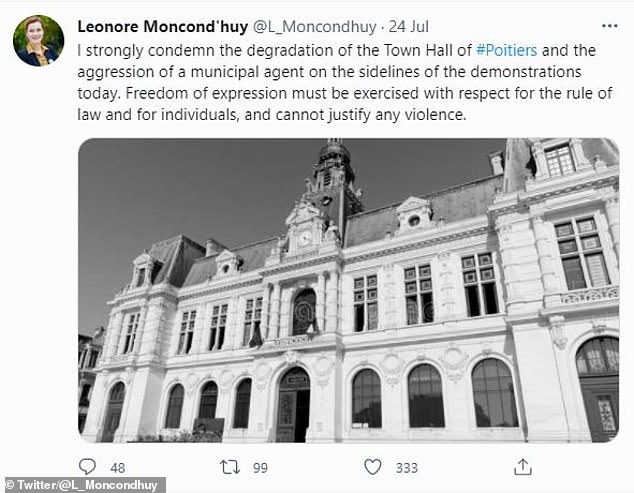 The mayor of Poitiers, Leonor Moncond’huy, condemned the protesters, which she said had also assaulted a municipal agent 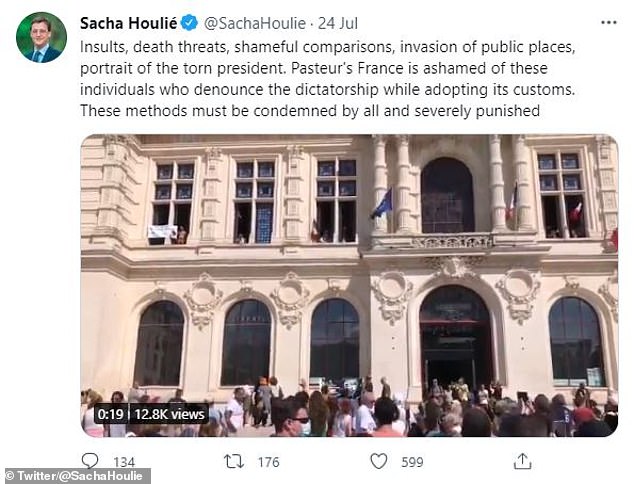 Earlier this month Macron announced in a TV address that coronavirus vaccination passes would be compulsory for bars, cafes and restaurants because of the rapid spread of the Delta Variant across France.

He also said there would be ‘compulsory vaccinations’ for all health workers, who risk fines if they do not comply.

The announcement sparked protests across France, with large crowds continuing to gather to demonstrate at weekends.

Visitors to museums, cinemas and swimming pools are already denied entry if they cannot prove they’ve been vaccinated or recently received a negative test.

On Monday, the French parliament passed the bill to extend the use of the passport.

Coronavirus cases are rising in France, where 27,128 new infections were recorded on Tuesday. A further 32 deaths were reported.