US president has published a series of tweets criticising Emmanuel Macron’s policies and his low approval rating. 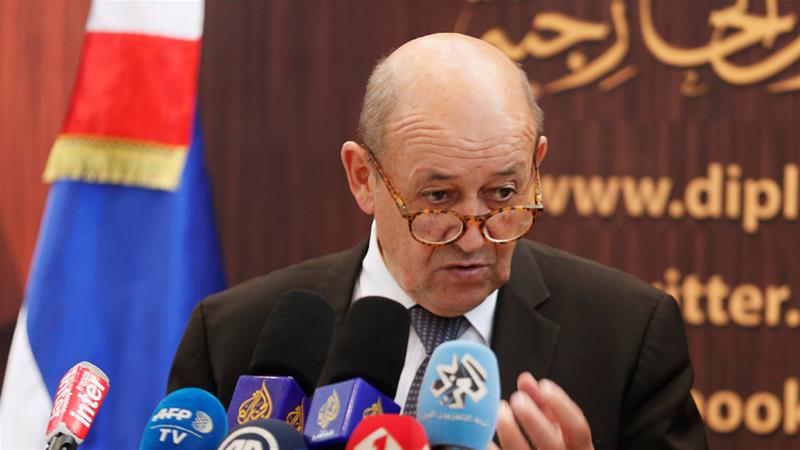 Donald Trump should not meddle in French affairs, its foreign minister said on Sunday, after the US president criticised France in tweets following riots in Paris.

Anti-government protesters faced off with riot police in Paris and other French cities on Saturday, hurling stones, torching cars, and vandalising shops and restaurants in a fourth weekend of unrest that has shaken President Emmanuel Macron’s authority.

“The Paris Agreement isn’t working out so well for Paris. Protests and riots all over France,” Trump wrote on his Twitter account.

Le Drian said images published in the United States with people chanting “We want Trump” were filmed during a Trump visit to London several months ago.

Clad in their luminous safety jackets, the “yellow vests” show no sign of calling off weeks of protests over rising living costs and accusations that Macron only looks out for the rich.

In a separate tweet, Trump also said: “Very sad day & night in Paris. Maybe it’s time to end the ridiculous and extremely expensive Paris Agreement and return money back to the people in the form of lower taxes? The US was way ahead of the curve on that and the only major country where emissions went down last year!”

Le Drian also said most Americans disagreed with Trump over his decision to walk away from the 2015 Paris climate agreement.

In the past few months, Trump has published a series of tweets criticising Macron’s climate and defence policies, as well as Macron’s low approval rating.

Macron is expected to meet union leaders and address the nation on Monday.

Finance Minister Bruno Le Maire said the unrest was a “catastrophe” for the French economy, with nationwide roadblocks playing havoc with the traffic and putting off tourists from visiting Paris. An estimated $1.5bn has been lost.

They overwhelmingly hail from rural and small-town France but have a range of different goals, from lower taxes to Macron’s resignation.

“It is clear that we underestimated people’s need to make themselves heard,” Griveaux told Europe 1 radio.

“It is anger that is difficult to understand from an office in Paris,” he acknowledged.

Alain Juppe, mayor of Bordeaux where a protester lost his hand after picking up an anti-riot grenade, joined calls from across the political spectrum for Macron to respond.

“This disorder must end,” the former prime minister tweeted. “The president must speak, and speak quickly.”