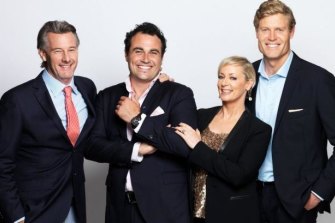 Maria Michael was the producer of The Living Room on Network Ten.

Ms Michael, a longtime producer at Ten, was among a raft of staff departures from the company in May this year amid a cost-cutting drive. She led production on a range of well-known programs, including Bondi Rescue, The Living Room and game shows Family Feud and Pointless.

In a Federal Court claim filed on August 31, Ms Michael's lawyers claim Ten contravened the Fair Work Act by paying her severance pay equating to 12 weeks' pay when she was entitled to 90 weeks' pay for "more than 30 years of continuous service".

Ms Michael's lawyers also claim Ten took adverse action against her in contravention of the Fair Work Act after she "exercised her workplace right" to complain or ask a question about the amount she would receive in redundancy entitlements.

The exit of Ms Michael was one of a number to take place in May as part of a cost-cutting effort by Network Ten, owned by global entertainment giant ViacomCBS.

More than 20 employees, including head of sport Matt White, head of comedy Paul Leadon and journalists at lifestyle site 10Daily, were made redundant.

At the time, Network Ten said the changes were not linked to the coronavirus pandemic – which caused a significant downturn in advertising revenue – but were associated with a strategic shift in the business.

Ms Michael's lawyers allege that on May 18 and 27 this year Ten said "it would pay her 14 weeks' pay in lieu of notice, and 16 weeks' pay for severance pay, upon the termination of her employment".

They say this was reduced to 13 weeks' pay in lieu of notice and 12 weeks' wages for severance pay after Ms Michael "complained" or "inquired" about the 16-week figure. This amounted to an alleged loss of five weeks' pay compared with the previous offer, or $25,216.10.

"As the claim is to be decided by the court, we have no comment to make," a Network Ten spokesperson said on Friday.