Dundee United footballer, 20, will be quizzed by his club over claims he blacked up as a sunglasses seller for fancy dress party

A football club is set to quiz a player after pictures showing a man ‘blacked up’ for a fancy dress party were posted on social media.

Dundee United have launched an investigation into the photographs which are believed to show defender Jamie Robson wearing a hi-vis bib, an umbrella hat, a white T-shirt and shorts with black leggings underneath.

The shameful outfit stereotyped Africans selling fake goods in hotspots such as Spain.

He is seen holding two signs – one reading ‘Cheap as Chips!’ with pairs of sunglasses attached and another reading ‘Buy 1 Get 5 free!’ with bracelets. 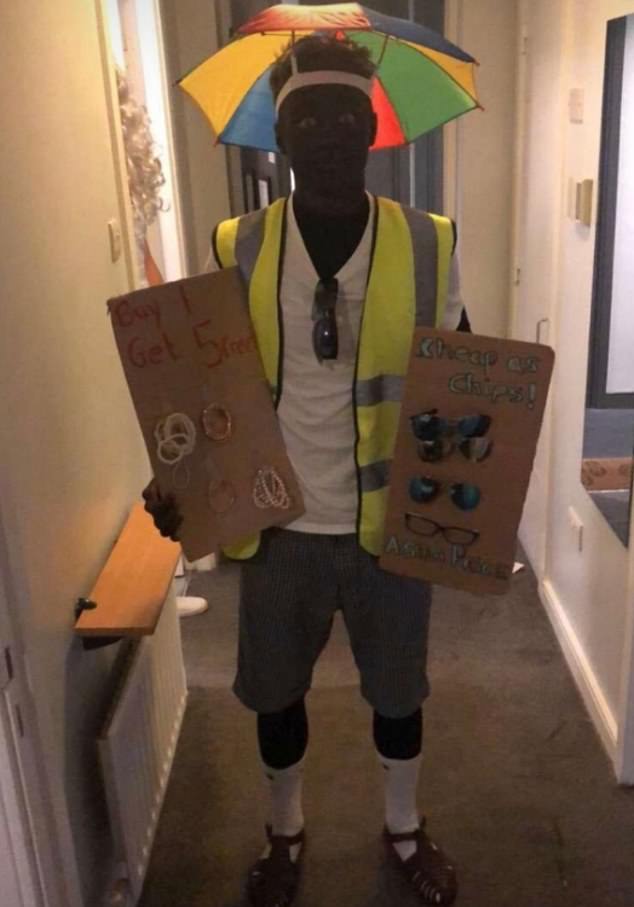 The image shows the man in the image holding two signs – one reading ‘Cheap as Chips!’ with pairs of sunglasses attached and another reading ‘Buy 1 Get 5 free!’ with bracelets

Several Dundee United fans condemned the image as racist and called for the club to fire Robson as a result.

Richard Wilson on Twitter said: ‘Dundee United’s Jamie Robson is obviously getting into trouble for this bit of fancy dress.

‘Some calling for a sacking – unsure whether its that or just a very sharp education the boy needs.’

Another user said: ‘Jamie Robson blacked up for a night out? What a fantastic excuse to rip up his contract. 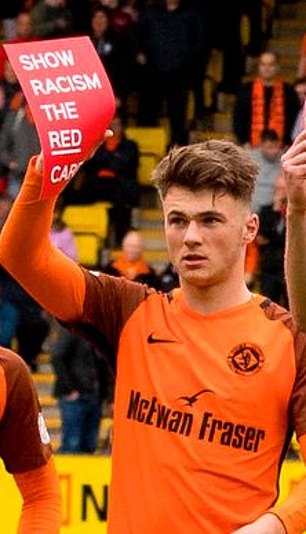 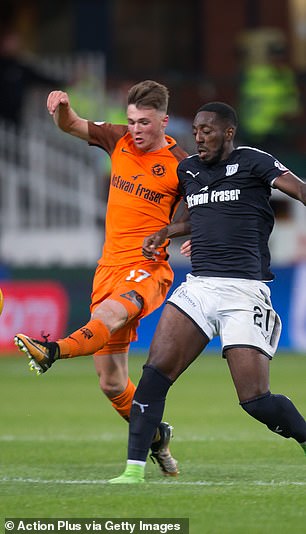 Dundee United said the club will be speaking to the player, left, pictured holding up a Show Racism the Red Card message during a match in 2017. Pictured right: Robson in August last year as he tackles Dundee player Roarie Deacon

‘Brainless on and off the pitch.’

Dundee United manager Robbie Neilson said: ‘I spoke to him briefly. The standards at this football club have to be kept at the highest level.

‘We will chat again later with him and the club will deal with it in-house.’

A spokesman for Dundee United told the Daily Record: ‘The club will speak to the player and the content of the discussion will remain internal.’

The incident comes nearly a year after a 45-second clip, from a Snapchat story, emerged showing Robson drinking a green liquid from a pint glass while driving.

He was called in for talks with the club, but they took no further action against him and said they were satisfied the drink was not alcoholic.

In May Robson signed a two-year extension to his deal with the Tannadice side.

He was not in the squad for United’s 1-1 draw with Greenock Morton on Saturday.