This is the shocking moment thieves stole a motorbike in broad daylight – on horseback.

CCTV footage shows a man and boy sneaking out with the bike as they are towed along by a horse.

The bizarre episode, filmed in Dartford, Kent, shows a horse tied to the bike as the boys make a less than speedy getaway. 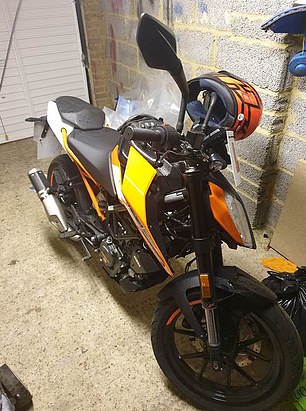 The user posted: ‘It’s a KTM duke 125 and I have never seen these people before’

‘I have owned it [the bike] for 2 months and I was doing a private job painting a bedroom for a friend at half 3 I went to get some lunch and came back and it had gone.

‘It’s a KTM duke 125 and I have never seen these people before.

I’m waiting for more info and contact number for him but he’s stopped replying, will update when I hear back.’

The video opens with the horse remaining still with only its head in view.

After some delay, the horse slowly trots onto the main road to reveal a hooded man sat on the back of the bike with reins.

In front of the hooded thief, a younger boy sits in front and leans forward on top of the bike.

The video also captures someone walking past the two boys, but does not intervene at any point.