This is the moment a group of conservation workers bring down a recently sedated giraffe during a relocation effort.

Footage recorded from inside a helicopter shows the large mammal running through the grass on a farm outside Vaalwater, South Africa.

As the aircraft ushers the giraffe towards the group, the eleven workers put long ropes in its path to slow it down. 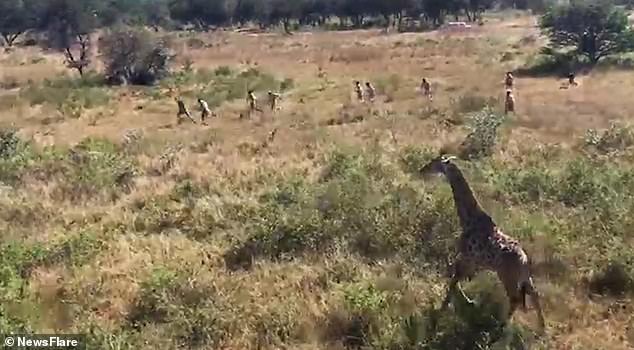 The helicopter ushers the giraffe towards the group of people in Vaalwater, South Africa

The giraffe keeps on moving for a few seconds after making contact with the ropes.

The workers then form two groups in front and behind the animal in an attempt to bring it under control.

Those in the front group then move to the sides and one man pulls on the rope around the giraffe’s legs to make it finally fall to the ground.

Once it is on the floor the group move in closer and secure the animal, which can reach running speeds of 55 km/h. 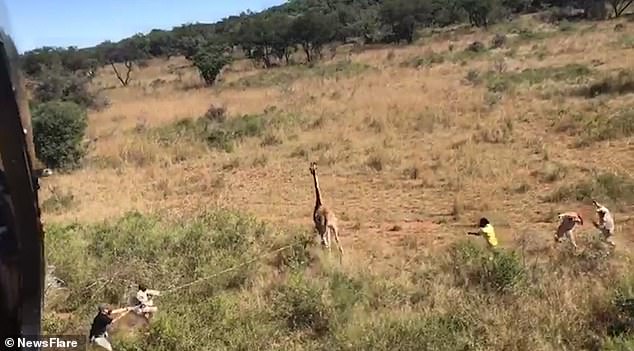 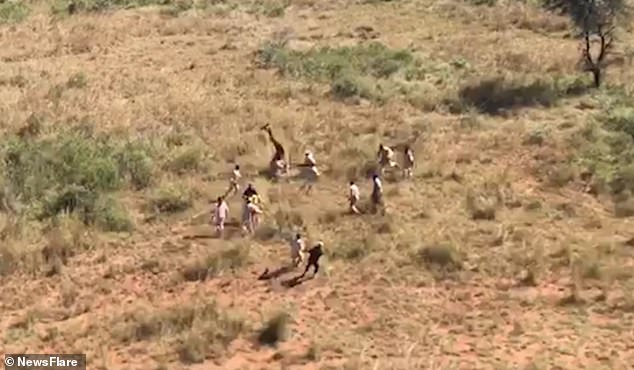 The animal, which has already been sedated, eventually falls and the workers secure it

The helicopter moves slightly closer to the scene once the giraffe is on the floor and appears to be turning around as the clip ends.

Giraffes rarely go down on their own after being sedated, which is why long ropes are used to secure the animals’ long legs, to prevent harm to it and the ground crew.

Male giraffes can grow to be between five and six metres tall and females can be between four and five metres.

In other parts of Africa giraffes have been moved because their habitat has shrunk as farmland increases and encroaches on the areas they graze.