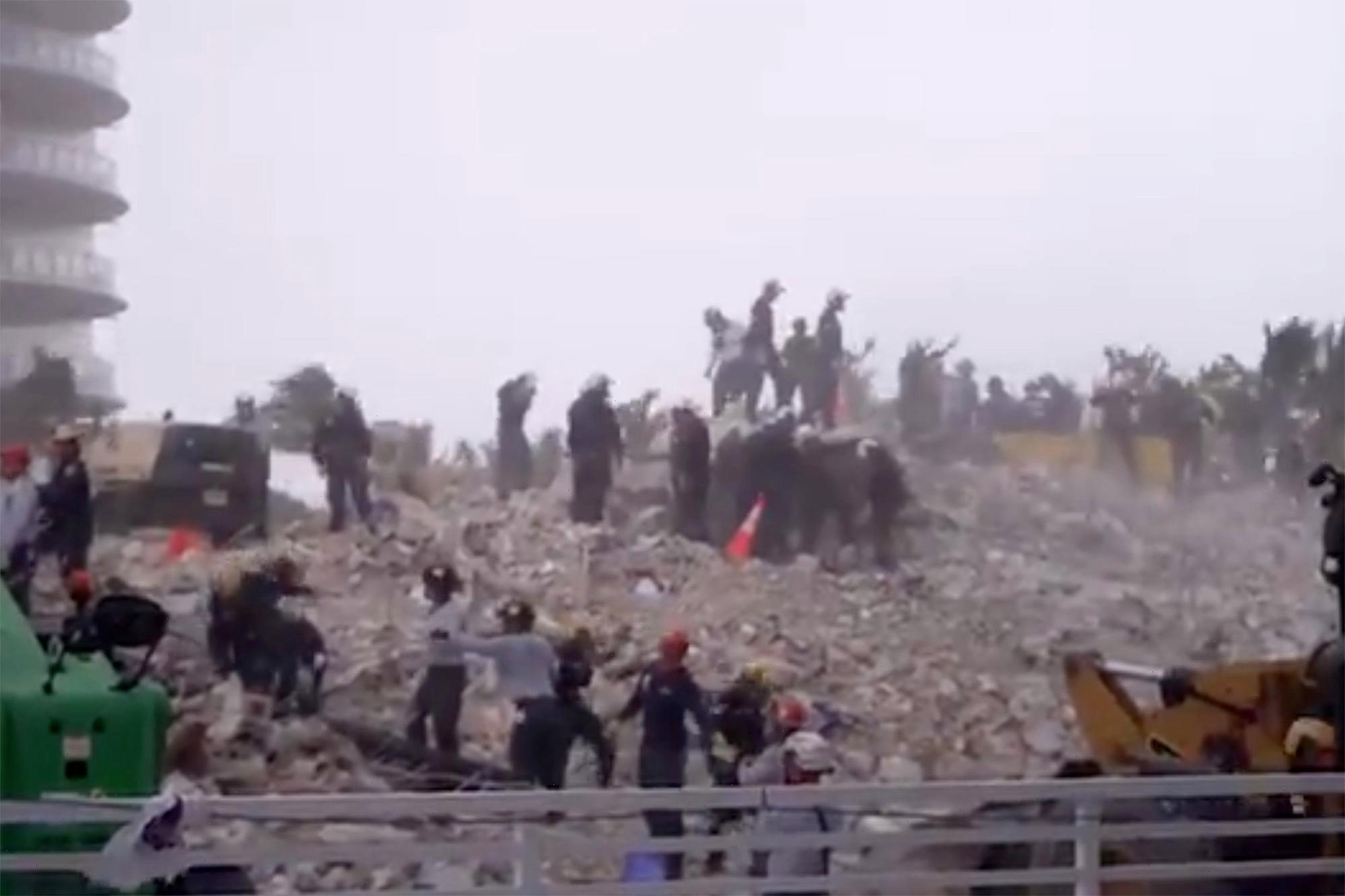 Footage posted by Miami-Dade Fire Rescue shows heroic workers wearing hard hats scattered throughout the Champlain Towers South building, some working with cranes and others in the rubble.

Behind them, palm trees sway violently as a sign of the extreme weather they are already dealing with as heavy bands of rain sweeping across the region from Elsa threaten to hamper their efforts Tuesday.

At times Monday they were forced to pause their efforts because of the deadly threat from thunderstorms, with the crews frustrated at the safety orders, Miami-Dade County Mayor Daniella Levine Cava said.

“Truly they live to save lives, and they’ve pushed ahead no matter what is thrown in their way,” she said at an evening news conference.

Heavy rain also meant most of the heavy rubble was quickly filled with water, officials said — but the mayor insisted it was still a “rescue” and not a “recovery.”

“There is hope there are voids to continue the search and rescue operation,” she said about the possibility of finding survivors, even though no one has been rescued alive since the first hours after the collapse.

Four more victims were discovered Monday — the 12th day of the rescue — raising the death toll to 28 people. Another 117 people remained unaccounted for.

Crews had by late Monday removed 4.8 million pounds of concrete, with the mission getting a big boost when the unstable remaining portion of the building came down Sunday.

The demolition — prompted by fears that the structure could fall — allowed rescuers into previously inaccessible places, including bedrooms.

“Likely a lot of people who were sleeping at that time, unfortunately,” Gov. Ron DeSantis, who toured the Surfside site on Monday, told the Miami Herald.

The demolition also allowed heavy equipment to now move freely around the site.

“The site is busier and more active now than I’ve seen it since we began, now that the damaged building is down,” Surfside Mayor Charles Burkett said.

City of Miami Fire Rescue Capt. Ignatius Carroll said that rescuers “remain focused on our primary mission” no matter the odds against them.

“And that is to leave no stone unturned and to find as many people as we can and to help bring either some answers to family and loved ones or to bring some closure to them,” Carroll said.

Elsa’s maximum sustained winds strengthened to 60 mph (95 kph) early Tuesday — and could strengthen to near hurricane strength before it makes landfall in Florida, the National Weather Service has warned.

It will bring heavy rain and even a few tornadoes to south Florida, the agency said.

The National Hurricane Center is warning of life-threatening storm surge along portions of the west coast of Florida Tuesday night and into Wednesday.

A hurricane watch has also been issued for a portion of the west-central and Big Bend coast of Florida, where hurricane conditions are possible Tuesday night and early Wednesday, the agency added.

The mayor said rescue crews can continue to work in winds up to 30 miles per hour.

Gov. DeSantis on Monday expanded an existing state of emergency to cover a dozen counties that span an area of Florida where Elsa is expected to make a swift passage on Wednesday. President Biden approved an Emergency Declaration for the state ahead of the storm.