Floods that have crippled much of Indonesia's capital, Jakarta, worsened on Tuesday. Homes, buildings, the presidential palace, and transportation networks have been destroyed or damaged, according to the Associated Press.

A devastating combination of sinking land and rising sea level could cause parts of Jakarta to be underwater by 2050.

The Indonesian government plans to address the issue by moving the city of nearly 10 million people one hundred miles away from its current location.

The project would take around ten years and require a $33 billion budget.

Here are a collection of photos from recent years that illustrate the chaos caused by the floods.

Floods in Indonesia have caused destruction and chaos in the country's capital city. 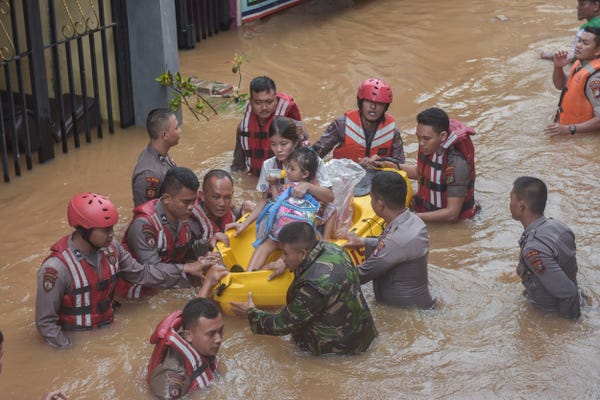 Jakarta faces the growing challenge of sea-level rise, which threatens to submerge entire swathes of the city by 2050. The problem is exacerbated by the fact that Jakarta's land is sinking up to 6.7 inches per year due to excessive groundwater pumping.

Homes and businesses have been flooded by up to five feet of muddy water. 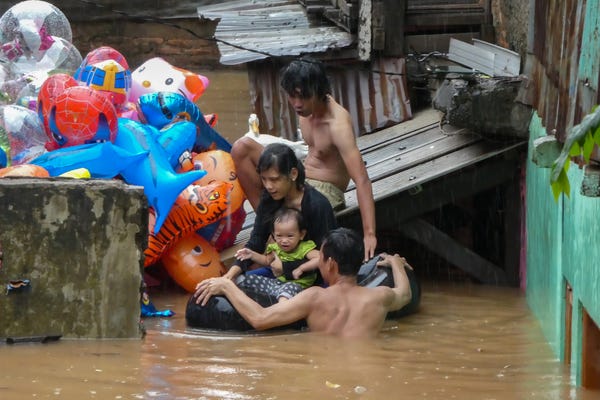 Residential and commercial areas are nearly underwater, according to the AP

On Tuesday, nearly 100 incidents of flooding were reported across the city. 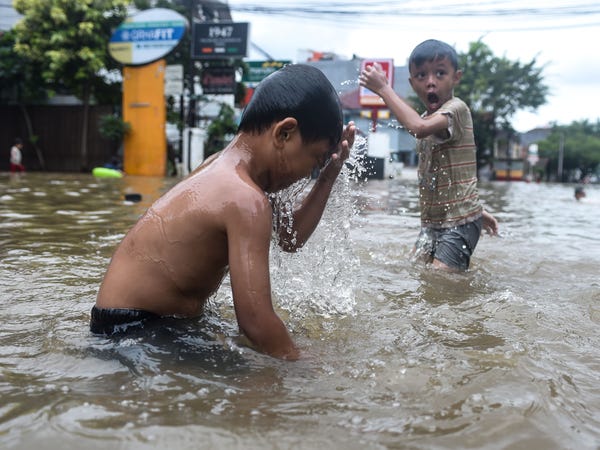 Several areas in the eastern part of the city are currently under nearly five feet of water, according to the Jakarta Post.

The recent floods have entered parts of the president's home and submerged the country's largest hospital. 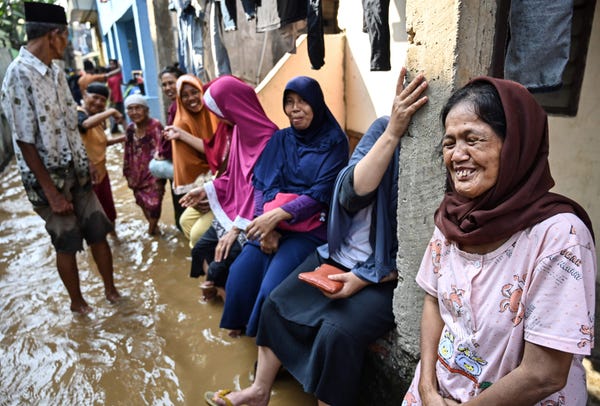 Floodwaters entered parts of Indonesia's presidential palace complex Tuesday morning, according to the AP. The situation was brought under control with water pumps.

The heavy downpour that hit the capital on Sunday had submerged the state-run Cipto Mangunkusumo hospital, the country's largest hospital, damaging medical machines and equipment, according to the AP.

This week's floods have displaced more than 300 people. 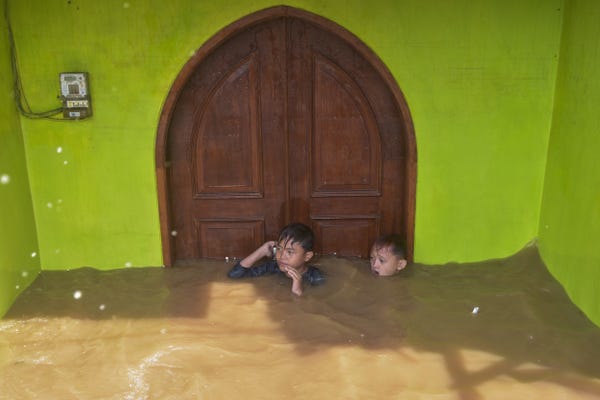 The most recent floods have left 300 people homeless and forced authorities to cut off electricity, according to the AP.

Transportation systems have also ground to a halt. 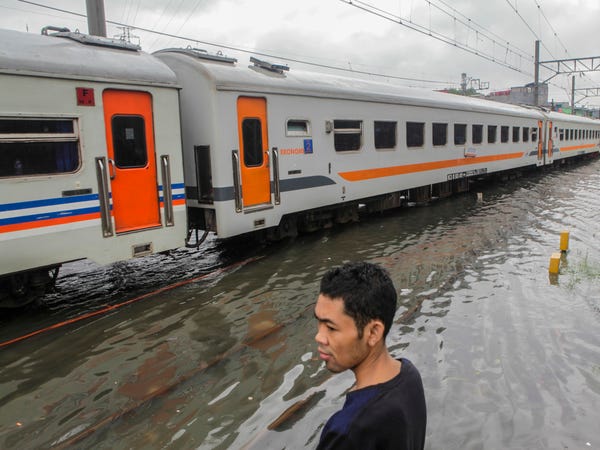 Most of the city's buses, local trains, and commuter rails have all been halted thanks to the flooding, reported the Jakarta Post. Portions of local roads and highways are also submerged making travel nearly impossible.

Floods in the city last month killed more than 60 people. 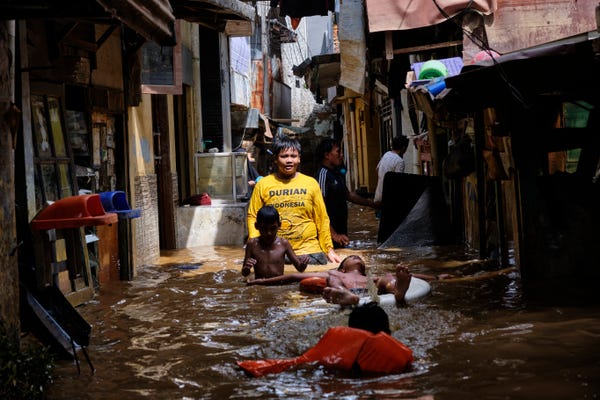 Jakarta is home to 10 million people, with a total of 30 million in its greater metropolitan area.

Severe flooding and landslides in January killed more than 60 people, displaced hundreds of thousands and forced an airport to close, according to the AP.

The Jakarta government is facing criticism for its handling of the problem. 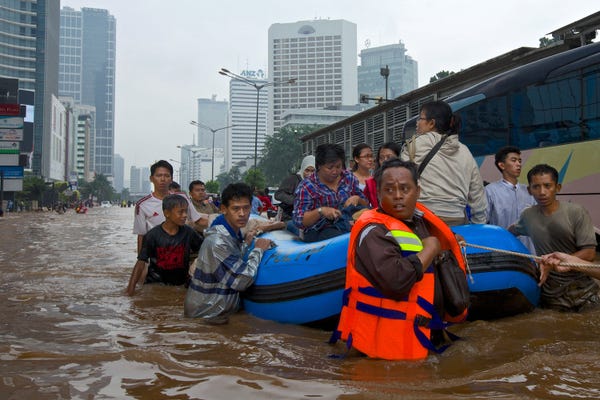 Jakarta Gov. Anies Baswedan, who was criticized when massive floods struck the city last month, blamed widespread deforestation in the southern hills, according to the AP.

Rescuers are taking people out of their homes and businesses in rafts.

This is far from the first time the city has experienced deadly flooding. In 2007 flooding lead to the deaths of 50 people, and in 2013, floodwaters caused the displacement of more than 18,000 people.

Jakarta has long been the capital of Indonesia, but it will likely move. 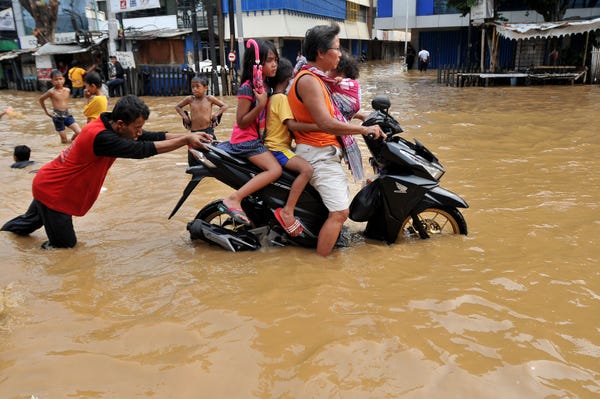 Jakarta has been the capital of Indonesia for seven decades, but the government announced over the summer that they plan to move it 100 miles away from its current location.

The new capital will be located in the sparsely populated East Kalimantan province on Borneo island, known for rainforests and orangutans, according to the AP.

The new capital location has yet to be named but was chosen because, among other things, it's "relatively free of earthquakes and volcanoes," according to the Jakarta Post. 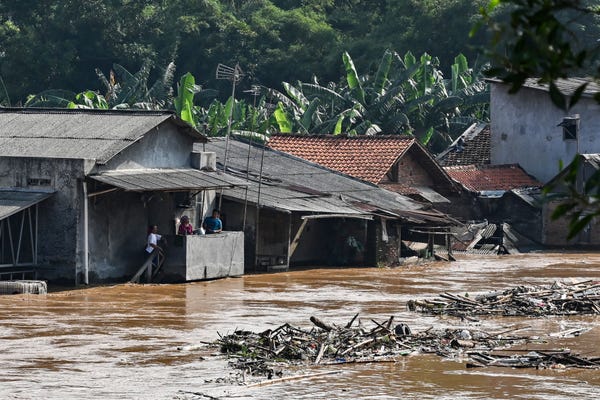 When the capital is moved, the central bank and financial institutions would remain where they are, but between 900,000 and 1.5 million of Jakarta's residents could be relocated.

In the meantime, Indonesians are preparing for even more rain. 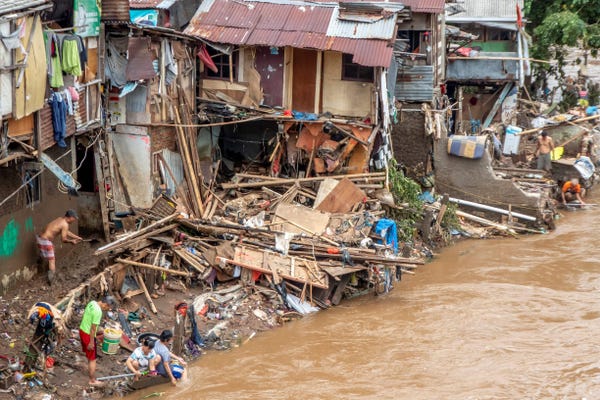 Indonesia's meteorological agency is predicting rain for the next two weeks, according to the AP.