Westminster city council is investigating a mansion block near Hyde Park after furious residents claimed that more than 100 flats there were being ‘illegally rented’ on Airbnb – to guests who throw parties and treat the place like a hotel.

The council said it has reason to believe that 106 of the 530 flats at Park West, a mansion block near Hyde Park in central London, were being used as Airbnb locations.

The apartments are supposed to be residential but with so many  Airbnb sites has caused disruption to neighbours, who say that guests are not ‘protective or careful’ of the block. 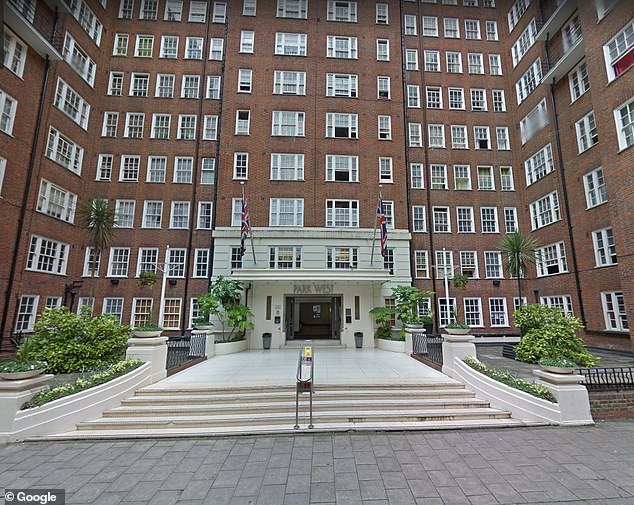 Furious residents of Park West mansion block, near Hyde Park in central London, say their home is more like a hotel because of all the ‘illegal’ Airbnb rented apartments

Airbnb hosts in London are limited to renting their homes for just 90 days a year, but in practice it is difficult to enforce this rule.

This has prompted Westminster city council to call on the government to force Airbnb – and similar companies – to share rental information with local authorities.

The council is currently investigating 1,383 short-term lets in the borough, including 106 at Park West.

There are an estimated 4,703 Airbnb listings in Westminster, that are let out on average 116 days a year – above the 90 day legal limit.

The council’s investigations have found multiple parties, music events and even sex work occurring within nightly lets in Westminster.

Ian Adams, the Conservative Westminster councillor in charge of public protection and licensing, said: ‘There are nearly as many total rooms available to rent night-by-night in Edgware Road’s Park West building as there are in the Ritz.

‘When a hotel opens in Westminster there are a clear set of rules and requirements but when a short-term let is opened, the council is not informed. If it poses an issue in the local area, we must begin a long and complicated process just to identify it.’

One resident, who has lived at Park West for more than 30 years, told FT: ‘These people treat the place like a hotel because they have no interest, it’s not their home.

‘They don’t care what damage they do. If they want to have a party, they’ll have a party.’

A search for Park West on Airbnb’s website finds around 40 results – although some may be at locations nearby.

Mark Jenner, company secretary of Highdorn, which manages Park West and other buildings, told FT: ‘We fight these battles in many of our blocks. We fight it as hard as we can, but it’s a losing battle.’

UK housing minister Heather Wheeler said the government want to support short-term lets because they were good for the economy.

‘We do not want to stifle this by introducing further legislation,’ she said. But she added that people ‘must rent out accommodation responsibly’ and it was up to local authorities to enforce the rules.

Airbnb has been approached for comment by Mail Online.