First published in the Sydney Morning Herald on September 27, 1883

THE VOLCANIC ERUPTIONS IN THE STRAITS OF SUNDA.
(BY TELEGRAPH)
(From our special correspondent)
COOKTOWN, Wednesday.

The latest news from Batavia states that over an extent of some 80 miles of country complete darkness was cast, in consequence of the recent eruptions in the Straits of Sunda.

White ashes fell all over the city and at Cheriboh. During the night all the gaslights were extinguished, and in the day time lamps had to be lit. 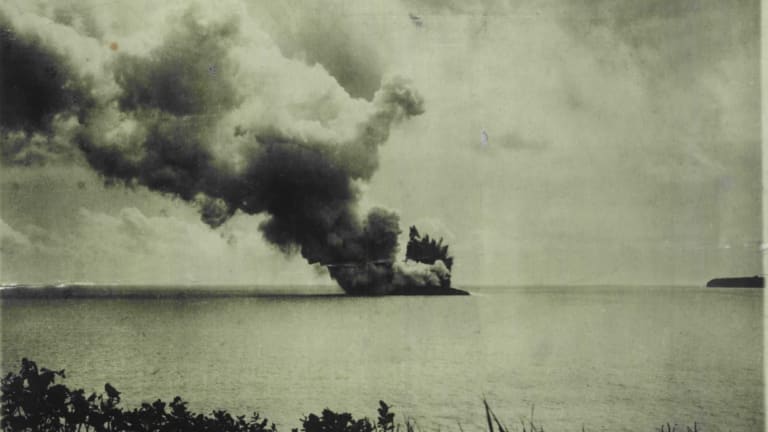 The sea rose to such a height in the Straits of Sunda that it totally swept over Anjer, Tyerigin, and Teloh Betong. It flooded all the rivers, which, rushing down, carried away bridges, and destroyed several Malay villages. All the boats on the coast were completely destroyed or carried far inland.

All the lighthouses in the Straits have disappeared, and the island Krakatoa has been rent into pieces by the strength of the volcanic action, and has sunk into the sea. The charts of the Straits are no longer trustworthy, as the bottom of the channel has entirely changed.

Between the islands of Krakatoa and Cibesie 16 volcanoes have appeared. The island Soengarpan has split into five islands. Bantam has been made an ashy desert. The cattle are dying for want of food, and a famine appears to be imminent. The residents are in despair. 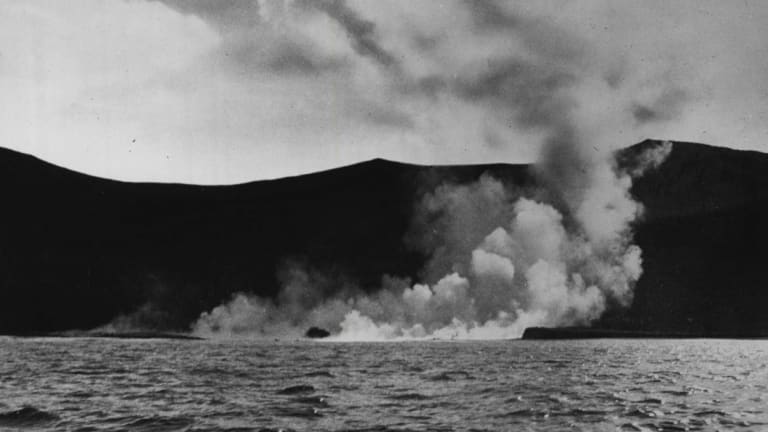 The volcanic mountain Rawoon, distant 20 miles from Bangorngie, has also been in active eruption, emitting huge volumes of smoke. A telegram has been received by the Governor of Singapore from the British consul at Batavia, it being as follows :—-" In consequence of the volcanic action, the configuration of Sunda Straits and the southern entrance thereto has been changed. Some islands have disappeared, and also upheavals are suspected. Anjer, with the lighthouse, has been destroyed, and probably other lighthouses in the neighbourhood have been damaged. A survey is proceeding. Recommend mariners to use extreme caution."

At Anjer on the Sunday evening strong detonations were heard and felt. The sea rose and fell three feet at intervale of from 10 to 1-5 minutes. Six distinct shocks of earthquake were felt during the night, and early on the following morning a high column of water struck the land with a roaring noise. An hour later there was another of the same sort, still higher, causing great destruction of life and property.

All the lighthouses in the Straits have disappeared, and the island Krakatoa has been rent into pieces… and has sunk into the sea.

During the night of the 27th August strong detonations from Krakatoa were heard at Soerakrata, and flashes of the volcanic fires were visible at Batavia. At 12 noon Serang was in total darkness, and stones were falling all over the town. Numerous villages near Anjer were washed away. It was almost dark at Batavia, and telegraphic communication with Anjer was interrupted, owing to the telegraph line being down.

The river overflowed through the rush of the sea inland. All the shops and offices were closed, and business was suspended. The telegraph inspector at Java reports that, while trying to repair the lines between Serang and Anjer he saw a high column of the sea approaching with a roaring noise. He fled inland, but believes that Anjer was destroyed.

At Batavia, at noon, on the 28th August, everything was quiet. The sky was clear, and the temperature down 10 degrees, and quite chilly towards nightfall. The bamboo houses along the beach were washed away by the tidal wave, which was not very high. The fish in the sea were very dizzy, and were caught with ease by the natives. The town was covered with a thin layer of ashes, giving the roads a quaint bright look, during which an ashy rain was distinctly heard falling. The mountain of Rawoon was in active eruption, emitting columns of smoke. All the lighthouses on the coast in the Straits have been totally destroyed.