Hong Kong: Chinese troops have emerged from a Hong Kong barracks to remove protester barricades in a rare appearance on the city's streets that has spooked democracy activists and was slammed as potentially violating the law.

Student protesters holed up in the Polytechnic University, metres from another People's Liberation Army barracks, told The Sydney Morning Herald and The Age they feared the appearance of the military was "the first step". 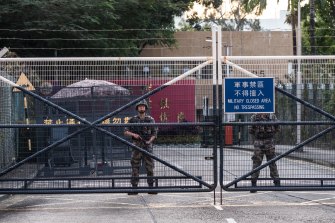 Members of the PLA stand guard at an entrance to their barracks in the Kowloon Tong area of Hong Kong. Credit:Bloomberg

Students threw petrol bombs metres from the PLA gates as riot police fired tear gas and rubber bullets. People's Liberation Army troops are rarely seen outside barracks in Hong Kong, and the threat of a Chinese military crackdown weighs heavily over the long-running protests, particularly after Chinese president Xi Jinping declared on Thursday it was Hong Kong's "most pressing task" to restore order.

So the sight of dozens of Chinese military in khaki T-shirts running out of the barracks in Kowloon Tong near Baptist University and working to lift road blocks at 4pm on Saturday prompted a news alert from the public broadcaster Radio Television Hong Kong.

Opposition party politicians demanded to know if Lam's government had invoked Article 14 of the Garrison Law "which stipulates that the PLA must not interfere in local affairs unless it is asked by the Hong Kong government to help with disaster relief or maintaining public order".

The article has never been invoked since the handover to China in 1997. A Hong Kong government spokesman said it had not requested the PLA's help and they had come out voluntarily.

Lawyer and author Antony Dapiran said the government's comment that the PLA was on the street as volunteers was "nonsense". He said unless there was an exemption in the Garrison Law for volunteers, the move was illegal.

"Removing protester barricades is not 'cleaning', it is 'policing'," he wrote on social media.

Saturday's appearance seemed highly staged, with Chinese propaganda outlets including the People's Daily, circulating video of the soldiers "removing bricks and other objects deliberately put on streets by rioters".

The Hong Kong government information office later distributed a press release from the PLA to media, which said officers and soldiers from the garrison had joined a clean up near the gate of the military camp.

The students held an urgent meeting to decide whether to continue their occupation of the campus or leave.

Three students in black masks on a boundary patrol outside the campus at 8.30pm said they were concerned there was a PLA barracks just metres across the road, which was littered with the protester's brick barricades, and had been blocked for three days.

At a security checkpoint manned by protesters inside the campus to prevent infiltration by undercover police, two Polytechnic students said they felt the PLA appearance at Kowloon Tong was "the first step".

Jace, 21, said: "It was absolutely a signal. They are trying to warn us not to do any further violent acts."

"Now the Chinese military have come out and identified themselves, later on they might use weapons to fight us," said another student.

"We are not afraid they will come inside to attack us, because we have enough manpower to stay here and defend the campus," he said.

Ahead of the police arriving at Hung Hom, a middle-aged couple watched the black clad protesters guarding the bombed toll booths. The woman said she was born in Hong Kong and started to cry: "This is not Hong Kong, this is terrible."