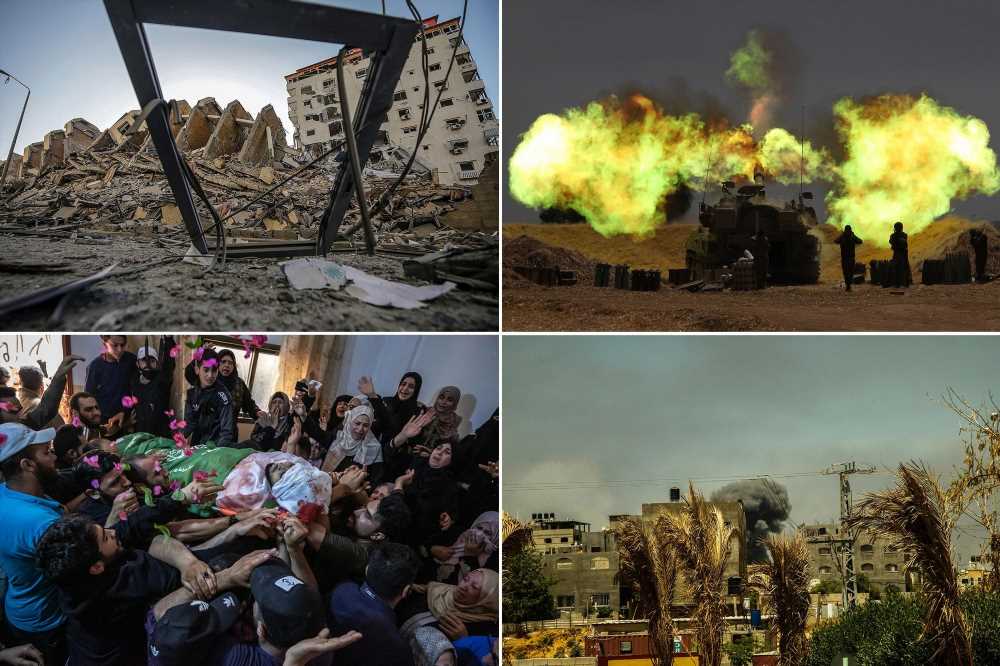 The escalating fighting between Israel and Palestinian militants in Gaza marks the region’s worst violence since 2014.

Six Israelis and 53 Palestinians, including 14 children, have been killed in the most recent conflict as Israeli airstrikes leveled buildings in Gaza and a barrage of Hamas rockets struck Tel Aviv and other cities overnight.

An anti-tank missile fired from the Gaza Strip on Wednesday killed a 21-year-old Israeli soldier — the first military death in the escalating Israeli-Hamas violence, officials said.

“The army will continue to attack to bring a total, long-term quiet. Only when we reach that goal will we be able to speak about a truce,” Gantz said in Ashkelon, the southern Israel city that has been pounded by Palestinian rocket fire.

His remarks came as the Israel Defense Forces continued to pound targets in Gaza in response to rocket barrages by Hamas and other militants on Tel Aviv and Beersheba.

Meanwhile, a senior Hamas official has reportedly called on Jerusalem residents to buy “five shekel knives” to “cut off the heads of Jews” in a recent video.

“People of Jerusalem, we want you to cut off the heads of the Jews with knives. With your hand, cut their artery from here,” Fathi Hammad, Hamas Political Bureau member and former interior minister, says in the clip, which was translated by the Middle East Media Research Institute.

The Gaza Health Ministry said the dead Palestinians include 14 children and three women, adding that 320 residents in the territory have been wounded in the strikes, including 86 children and 39 women.

Israel came under scrutiny during the 50-day 2014 conflict, which saw the bombing of residential buildings — among the tactics still under investigation by the International Criminal Court in The Hague.

Israel does not belong to the ICC and has condemned the investigation, while Palestinians joined in 2015 and had long pushed for the probe.

Fatou Bensouda, the ICC prosecutor in the probe, said the investigation will include a review of Hamas rockets fired into Israel during the 2014 conflict.

In a new statement, Bensouda expressed “great concern” over the current escalation of violence, and warmed of “the possible commission of crimes.”