Felicity Huffman is a free woman.

The 56-year-old actress was released from the Federal Correction Institution in Dublin, California on Thursday according to a spokesperson for the Federal Bureau of Prisons.

She reported to the low-security prison on October 15, one day after Columbus Day

Huffman’s release came less than two weeks into her 14-day sentence after she entered a guilty plea to a charge of conspiracy to commit mail fraud.

She will now spend a year on probation for paying $15,000 for a proctor to falsify her daughter’s standardized aptitude test in order to get the teen a higher score. 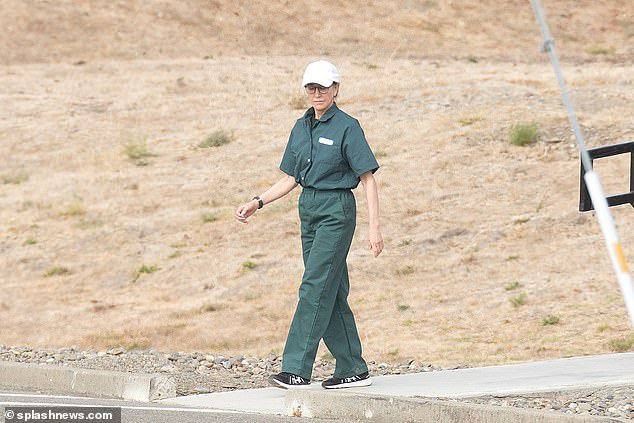 Free: Felicity Huffman (above on Sunday) was released from the FCI Dublin on Friday after serving 11 days of the 14-day sentence handed down by Judge Indira Talwani

NBC was the first to report the news of Huffman’s release.

The decision to release Huffman early seemed to fly in the face of the punishment handed down by Judge Indira Talwani when she sentenced the actress.

‘The outrage in this case is a system that is already so distorted by money and privilege in the first place,’ noted Judge Talwani last month.

‘And that in a system in that context, that you took the step of having one more advantage to put your child ahead.’

At the same time, Huffman expressed remorse for her actions and a willingness to accept whatever sentence was handed down in her courtroom remarks as well as legal filings.

‘I accept the court’s decision today without reservation. I have always been prepared to accept whatever punishment Judge Talwani imposed,’ said Huffman in court.

‘I broke the law. I have admitted that and I pleaded guilty to this crime. There are no excuses or justifications for my actions. Period.’

Huffman found a way to game the system however by reporting on a Sunday for her two week sentence, which allowed the Federal Bureau of Prisons to release her Friday.

‘The Bureau of Prisons may release an inmate whose release date falls on a Saturday, Sunday, or legal holiday, on the last preceding weekday unless it is necessary to detain the inmate for another jurisdiction seeking custody under a detainer, or for any other reason which might indicate that the inmate should not be released until the inmate’s scheduled release date,’ reads the loophole that got Huffman out two days ahead of schedule.

This early release comes on the heels of a sentencing hearing that stressed the disparity between the incarceration of white and non-white offenders.

Assistant US Attorney Eric Rosen came armed with a number of cases where lower-class Americans who committed similar offenses to Huffman, and for far more altruistic reasons, were sent to prison.

‘Wealthy people who get their picture taken get off, poor people who garner little more than a press release go to jail,’ said Rosen.

‘In prison, there is no paparazzi, in prison everyone is treated the same, wears the same clothes and is subject to the same rules.’

One of those cases, in Akron, Ohio, resulted in a mother being sentenced to 10 days in jail because she wanted her daughter to get into a better public school and falsified her address.

‘If a poor, single mom from Akron goes to jail, there is no reason why a wealthy, privileged mother should avoid the same fate,’ said Rosen.

That women, Kelley Williams-Bolar, was actually sentenced to and served 9 days behind bars, but only after Governor John Kasich of Ohio commuted her initial sentence of five years.

Her crime was using a fake address that actually belonged to her father to enroll her tow young children in another school district. 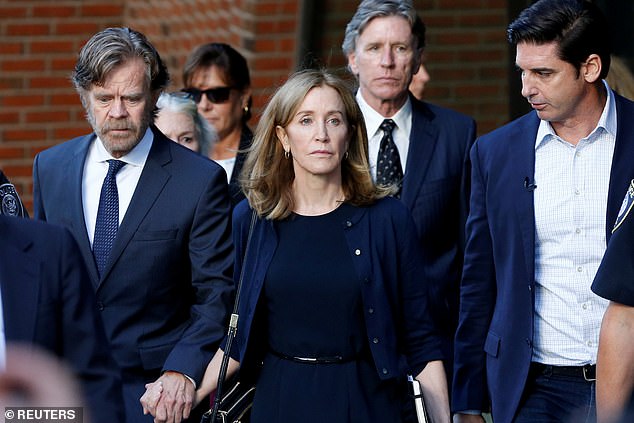 Long way to go: She will now spend a year on probation and have to pay a $30,000 fine while also serving 250 hours of community service (Huffman and William H Macy at her sentencing in September) 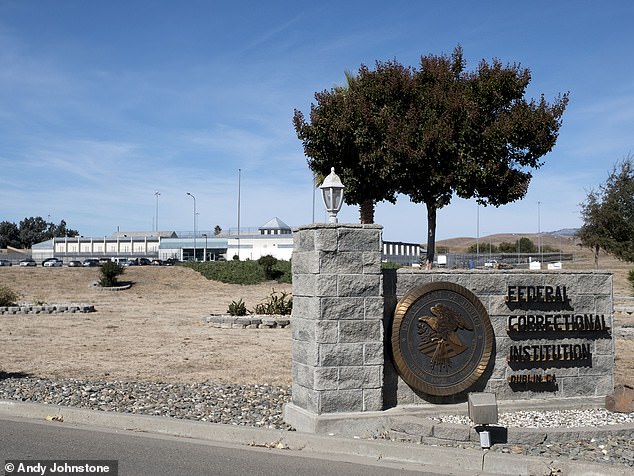 American crime: Huffman found a way to game the system however by reporting on a Sunday for her two week sentence, allowing her to be released ahead of schedule

Prosecutors also made a few not-so-subtle references to Huffman’s fame and fortune in their sentencing memo, suggesting that probation at her California compound would be more like a vacation.

‘Neither probation nor home confinement (in a large home in the Hollywood Hills with an infinity pool) would constitute meaningful punishment or deter others from committing similar crimes,’ read the court filing submitted last week.

In a letter to Judge Talwani that was obtained by DailyMail.com, Huffman detailed the tearful confrontation she had with her children after her arrest.

That same court filing also revealed that on the morning of Huffman’s arrest, her teenage daughters woke up to find FBI agents with guns drawn to their heads.

‘I have broken the law, deceived the educational community, betrayed my daughter, and failed my family,’ wrote Huffman in her letter to Judge Talwani.

‘When my daughter looked at me and asked with tears streaming down her face, “Why didn’t you believe in me? Why didn’t you think I could do it on my own?” I had no adequate answer for her.’

Huffman continued: ‘I could only say, “I am sorry. I was frightened and I was stupid.”‘

She then explained how this one decision caused her entire life to fall apart.

‘In my blind panic, I have done the exact thing that I was desperate to avoid,’ said Huffman.

‘I have compromised my daughter’s culture, the wholeness of my family and my own integrity.’

The actress also got support from over 30 friends and family members, with her siblings, Eva Longoria, Macy, Desperate Housewives creator Marc Cherry and more writing letters on her behalf that were filed in court.

Federal documents show that while Huffman worked alone to iron out the details when the couple’s first daughter had her SAT changed by a proctor to improve her score, Macy was aware of the situation and the payment came from the couple’s joint account.

He in turn took a more active role in organizing the younger daughter’s fraudulent SAT, agreeing to the money and a set place and time much like his wife had done one year prior with their other child.

In that case however, the couple’s daughter achieved the results she had hoped for on her own and the mastermind behind the operation was informed that she would not be needing to submit a fraudulent score.

Huffman paid a $15,000 ‘charitable contribution ‘to participate in the college entrance exam cheating scheme on behalf of her eldest daughter,’ states the complaint.

‘Huffman later made arrangements to pursue the scheme a second time, for her younger daughter, before deciding not to do so,’ according to the documents.

The charging documents state that Huffman had the site where her daughter took the SATs moved from her own high school to a test center West Hollywood.

That was to avoid a teacher who knew the girl, who had also applied for and received extended time to take the test, from being present.

The girl’s test was then administered by a proctor who had flown in from Tampa and told investigators that he ‘facilitated cheating, either by correcting the student’s answers after the test or by actively assisting the student during the exam.’

That proctor, Mark Ridell, has also been charged.

In this case, Huffman’s daughter scored a 1420, which was a 400 point improvement from her PSAT results just one year prior.

Soon after the proctor was paid $40,000 by Key Worldwide Foundation, the same organization that Huffman would later give a $15,000 donation to, according to the documents.

The documents also include the transcript of a phone call between Huffman and the individual who facilitated the test in which she admits that her older daughter had assistance and expresses her desire for her younger daughter to get similar help.

In a follow up call just this past December, Huffman and her unnamed spouse spoke about their daughter wanting to get into Georgetown.

It was then decided that the young girl would take the exam twice, once on her own and once with help, to ensure she got the score necessary to get her into Georgetown, it is claimed.

Then, at the last second, the couple decided not to have their daughter take the test with assistance.