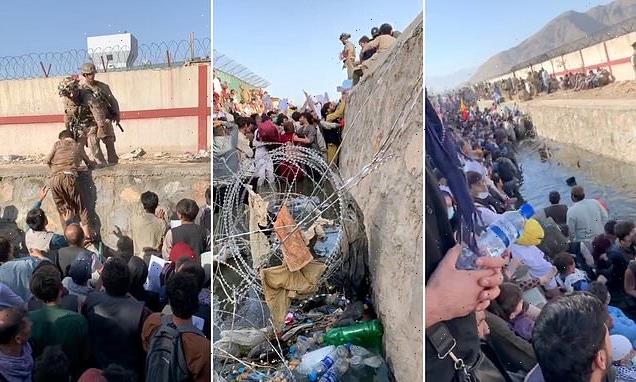 The desperate last scramble for freedom: Terrified civilians plead with soldiers to let them on planes at Kabul airport amid fears of a fatal STAMPEDE – after Biden’s decision to stick to Aug 31 deadline leaves them with just hours to flee

Wading through sewage and barbed wire while pleading with soldiers to put them on a plane – this is what the final hope looks like for thousands of Afghans stranded at Kabul airport today.

With as little as 24 hours left before civilian mercy flights stop, desperate men, women and children made a last-ditch bid for freedom amid growing fears they could try to storm the airport or that opportunistic terrorists could attack the densely-packed crowd.

Those fears will only grow in the coming days as as civilian mercy flights stop and troops begin withdrawing from the airport, with hundreds of American soldiers already thought to have left on flights that departed Tuesday.

The desperation to get on the last flights is already plain, with people standing in sewage up to their knees on the south side of the airport today while begging soldiers to let them inside.

For those not already at the airport, the chances of escape appear slim after the Taliban said it would block any more Afghan citizens from going there and reports from the ground suggested that even those with western passports were being turned away at checkpoints.

It comes after Joe Biden, faced with Taliban threats, announced that he will be sticking to his August 31 deadline to withdraw all forces from the country – something western allies say will mean thousands of Afghans who were promised sanctuary being left behind under Islamist rule. 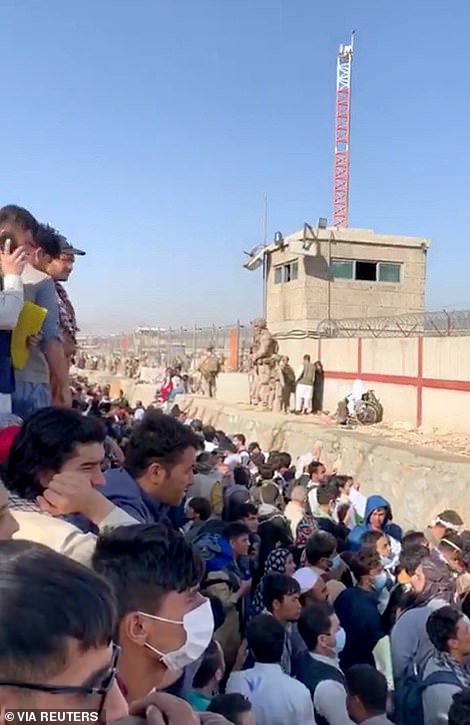 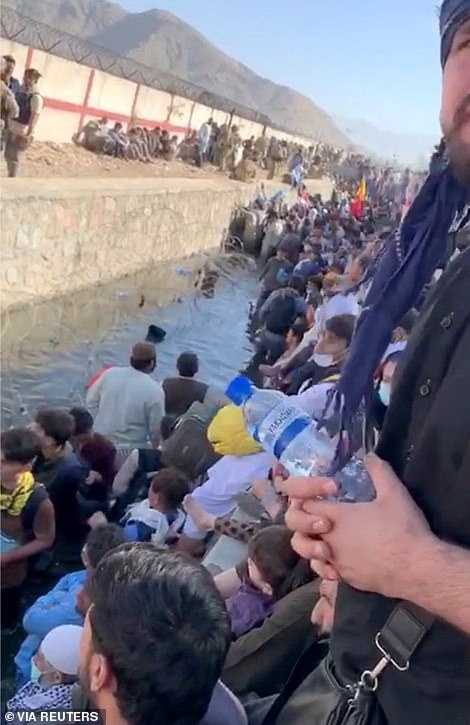 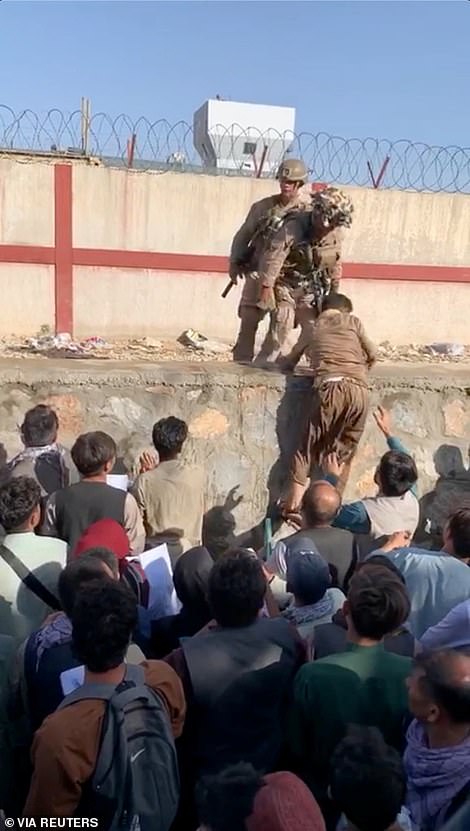 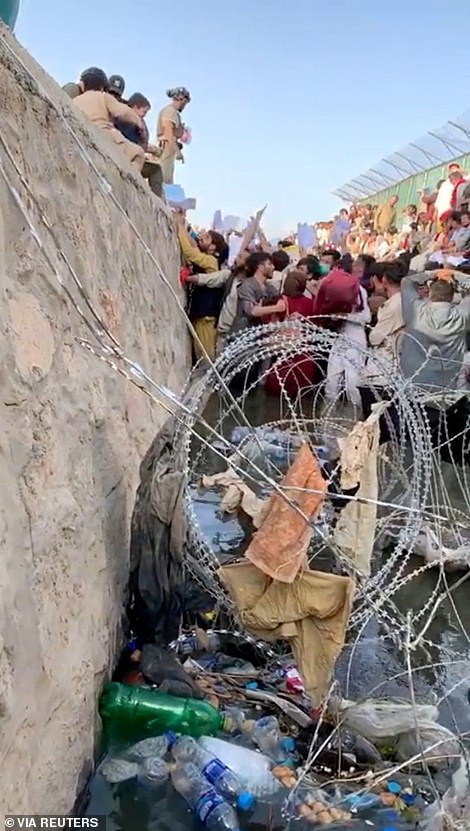 A lucky man is hauled to safety by a soldier (left) and allowed one step closer to freedom, but most were left wallowing in filth as their pleas fell on deaf ears with as little as 24 hours left until civilian mercy flights top 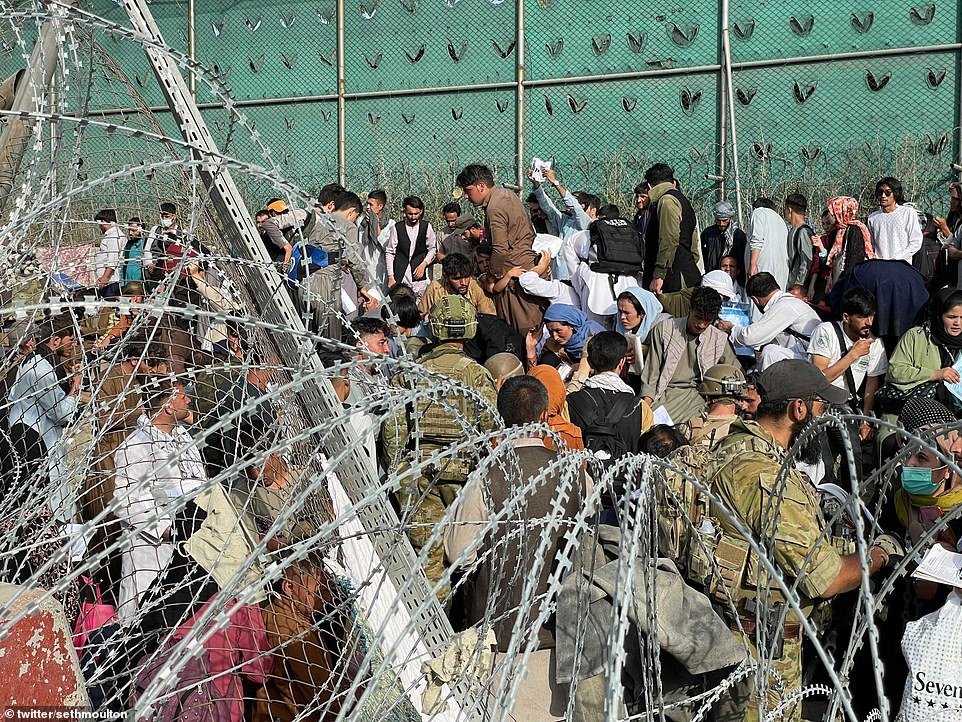 Fears are growing that crowds could try to storm the airport once civilian mercy flights stop, or that opportunistic terrorists could attack the densely-packed crowd 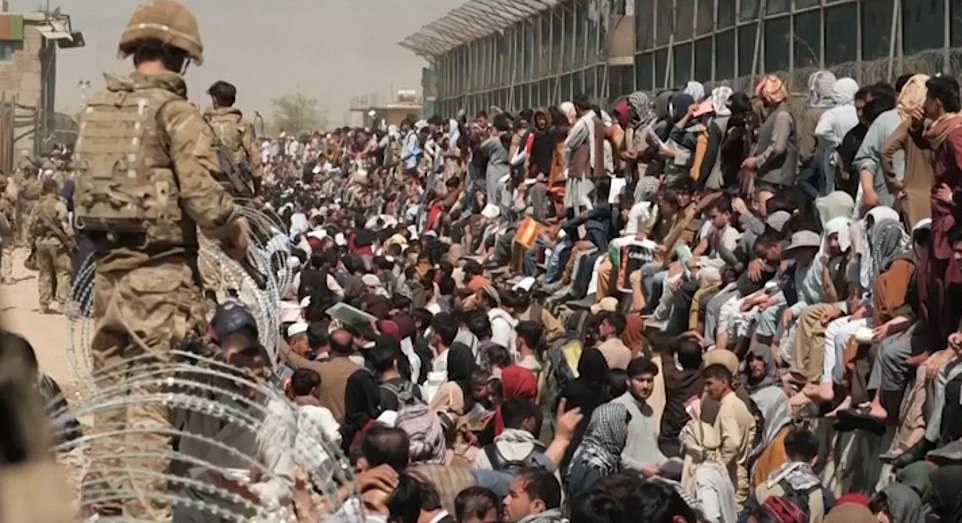 Biden has committed the US to withdraw by August 31, a decision that western allies warn will mean thousands of Afghans who were promised sanctuary being left behind 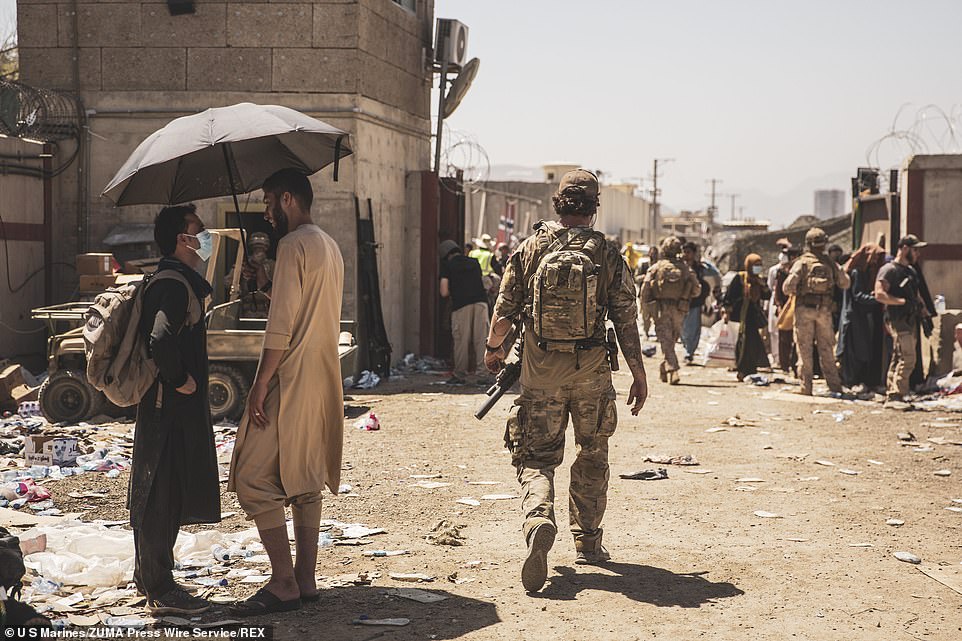 The Taliban has said it will now block all Afghan citizens from reaching the airport, meaning that those who are not already outside the gates face little prospect of being able to escape 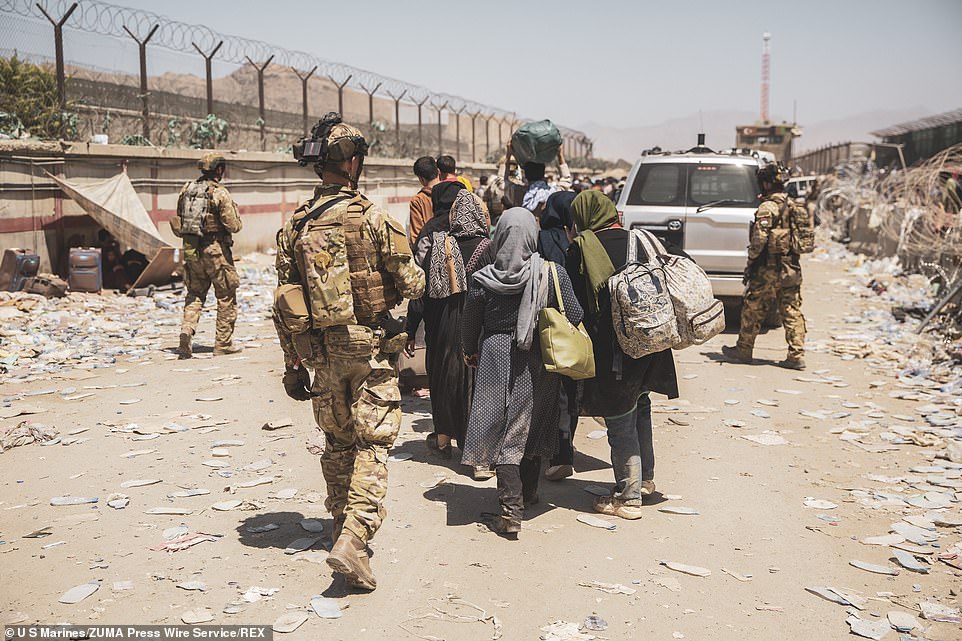 American troops and their allies have evacuated some 70,000 people from the airport since the Taliban took power on August 14, but the effort falls far short of the more-than 100,000 that western nations had promised to take 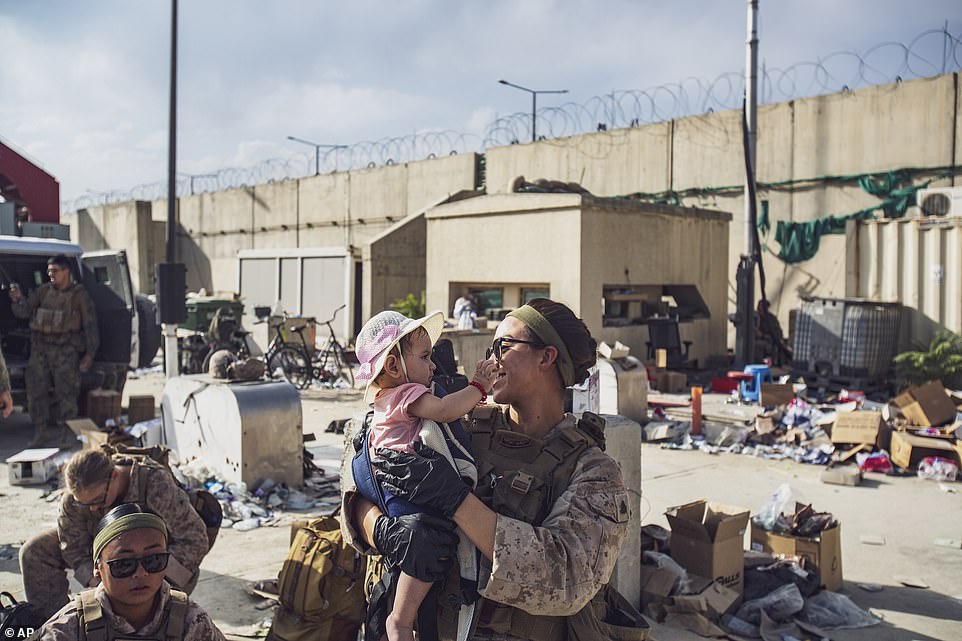 A US marine comforts a child at Kabul airport as the evacuation operation nears it end, with US allies saying flights could stop within the next 24 hours 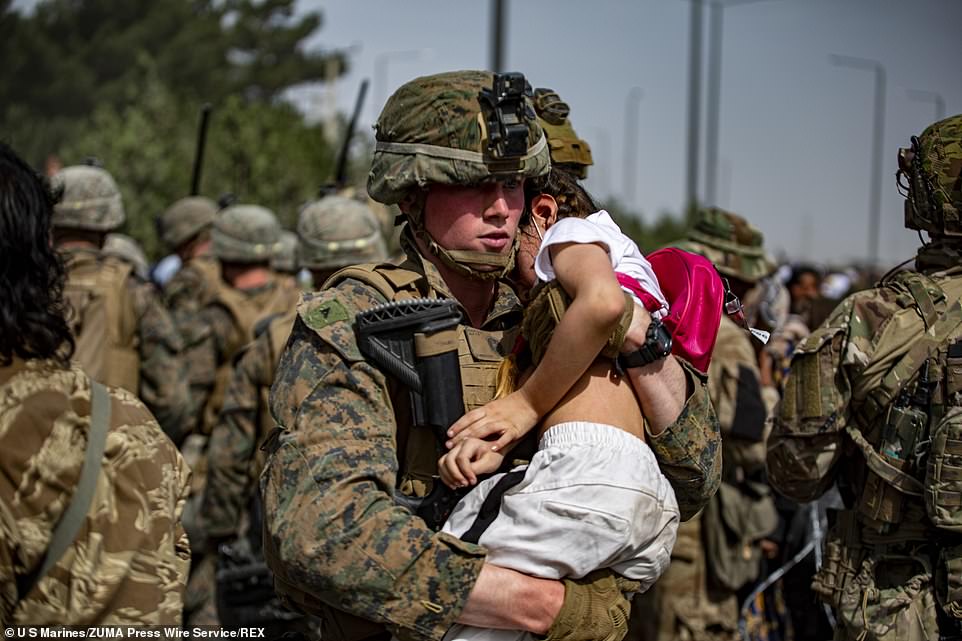 ‘The sooner we can finish, the better… each day of operations brings added risk to our troops,’ Biden said during his announcement on Tuesday. ‘We are currently on the pace to finish by August 31.’

Many Afghans fear a repeat of the brutal five-year Taliban regime that was toppled in 2001, and violent retribution for working with foreign militaries, Western missions and the previous US-backed government.

Washington and its allies have been flying out thousands of such Afghans every day on hulking military transports, but it has become an increasingly difficult and desperate task.

The Afghan capital’s airport has been gripped by chaos as US-led troops try to maintain a secure perimeter for evacuation flights, surrounded by desperate Afghans.

Some have foreign passports, visas or eligibility to travel, but most do not. At least eight people have died in the chaos.

‘Does anyone … ANYONE … have a contact inside the airport,’ pleaded one American on a WhatsApp group set up to share information on how people can access the airport.

The Taliban have also been accused of blocking or slowing access for many trying to reach the airport, although they denied the charge again late Tuesday.

Biden said the Taliban were taking steps to assist, but there was also an ‘acute and growing risk’ of an attack by the regional chapter of the Islamic State jihadist group.

CIA Director William Burns flew to Kabul for a secret meeting with top Taliban leader Abdul Ghani Baradar, US media reported Tuesday, the highest-level meeting so far between the US government and the new rulers of Afghanistan.

The New York Times said the spy chief was not there to negotiate an extension to the pullout deadline, but for general talks on ‘evacuation operations and terrorist threats’.

Despite the harrowing scenes at Kabul airport, the Taliban have ruled out any extension to next Tuesday’s deadline to pull out foreign troops, describing it as ‘a red line’.

‘They have planes, they have the airport, they should get their citizens and contractors out of here,’ Taliban spokesman Zabihullah Mujahid said Tuesday.

European nations have said they would not be able to airlift all at-risk Afghans before August 31.

‘Even if (the evacuation) goes on… a few days longer, it will not be enough,’ German Foreign Minister Heiko Maas told Bild TV.

A hard withdrawal deadline presents a further complication that may reduce the number of daily evacuations.

That 6,000-plus contingent, as well as hundreds of US officials, 600 Afghan troops and the equipment, will have to be flown out.

To do that by August 31, the Pentagon said operations would have to start winding down days in advance.

Following their lightning victory that stunned the world, the Taliban have so far been content to allow the US-led operation to continue, focusing instead on consolidating control and forming a government.

They have vowed a softer, more inclusive regime this time around, offering amnesty to opponents and assurances of rights to women.

But many Afghans remain fearful and sceptical.

In an attempt to assuage fears, the Taliban spokesman on Tuesday urged skilled Afghans to not flee, saying the country needed ‘expert’ Afghans such as doctors and engineers.

But Zabihullah Mujahid added that women who work for the Afghan government should stay home until the security situation improves.

The Taliban have said women will be able to get an education and work, but within what they consider Islamic bounds. 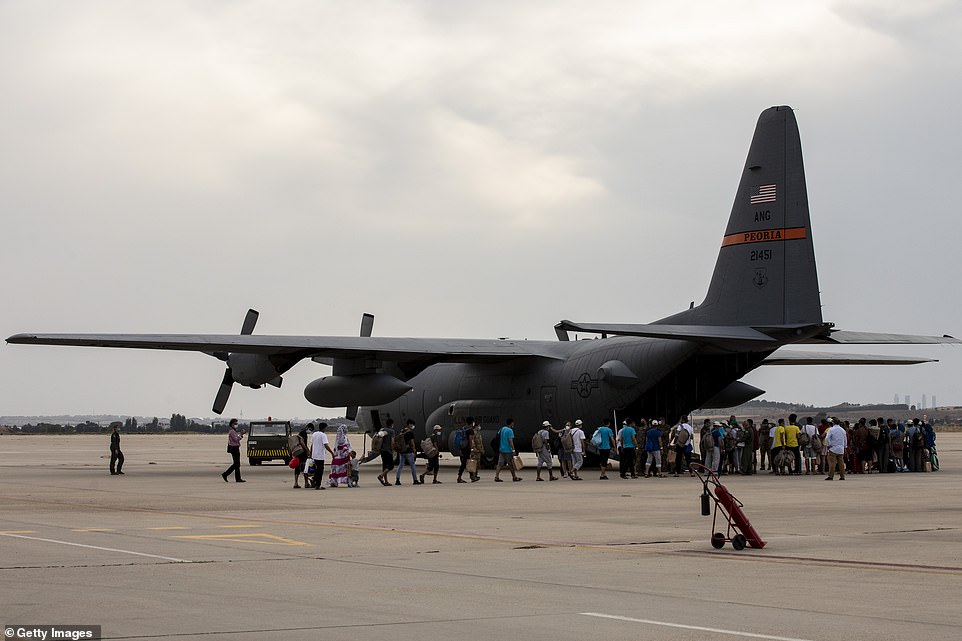 A US Hercules transport plane waits on the tarmac at Zaragoza Airport, in Spain, as Afghans who already manage to flee Kabul are loaded on board for transport to their next destination 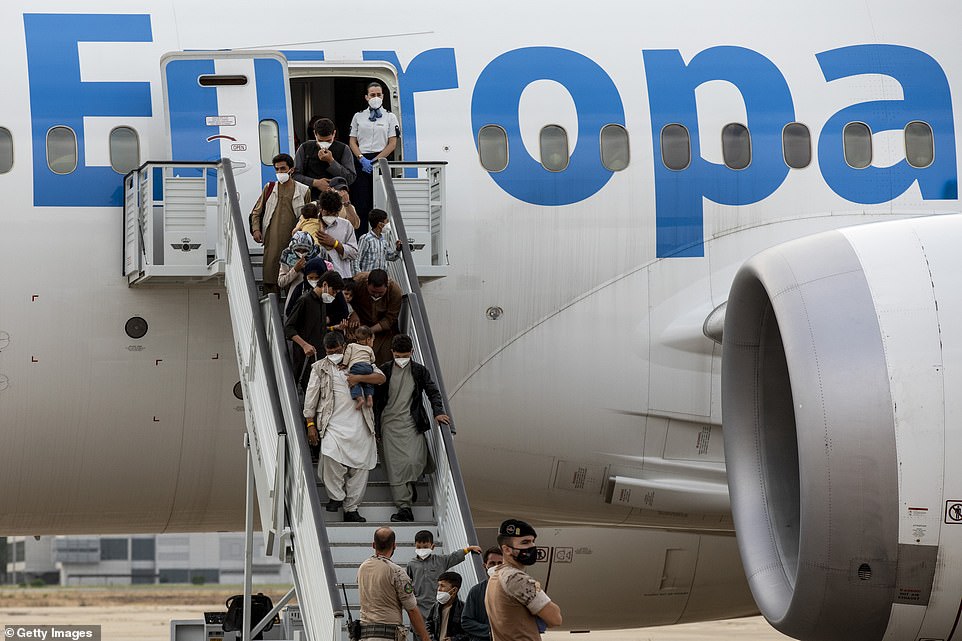 Afghan people, who were evacuated from Kabul, disembark a plane at Torrejon Military Air Base in Madrid, Spain 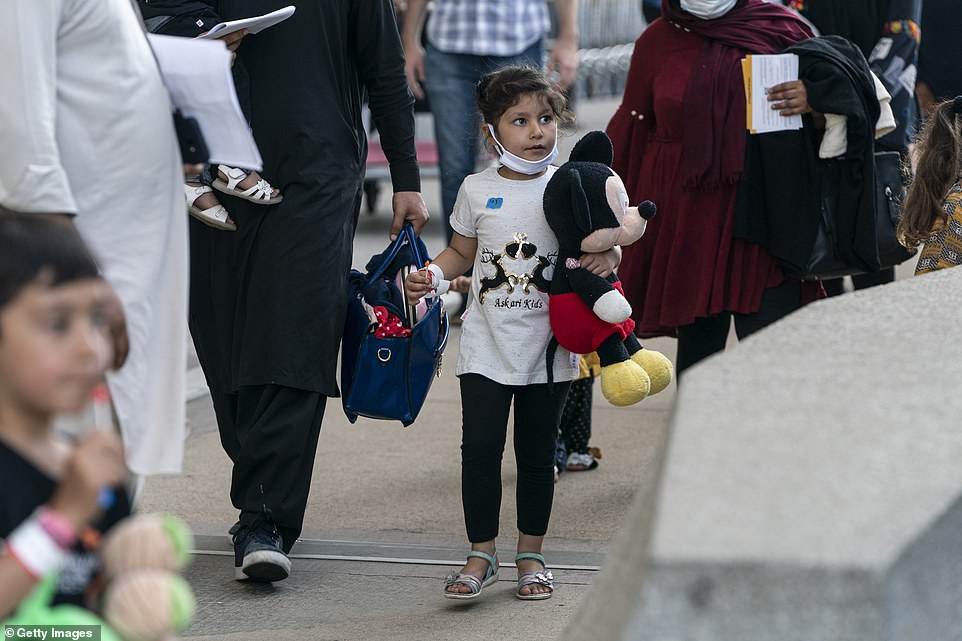 An Afghan girl carrying a Mickey Mouse doll walks to a bus that will take them to a refugee processing center at Dulles International Airport, Virginia 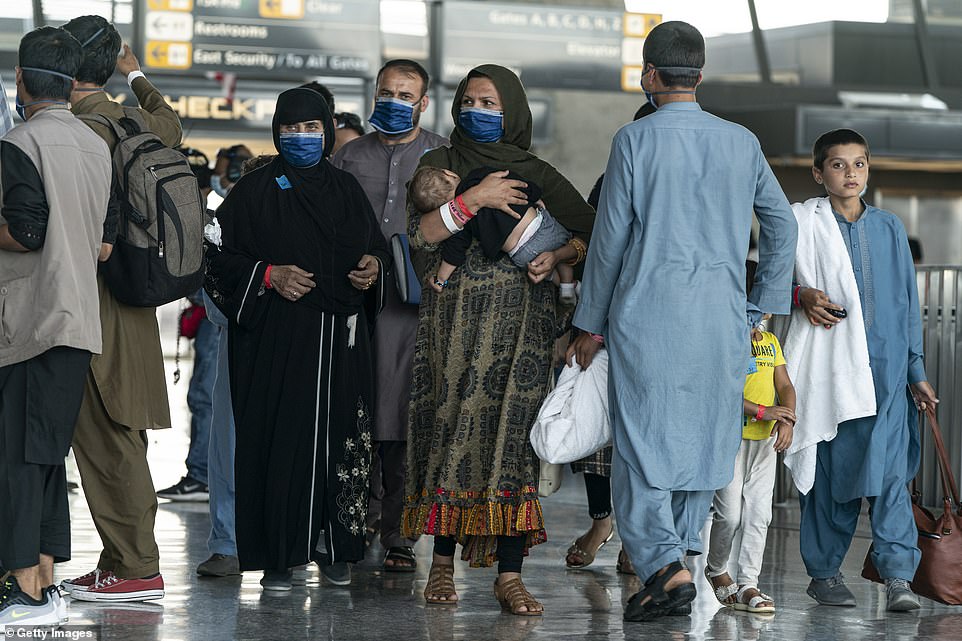 Afghan families walk to a bus that will take them to a refugee processing center at Dulles International Airport, Virginia 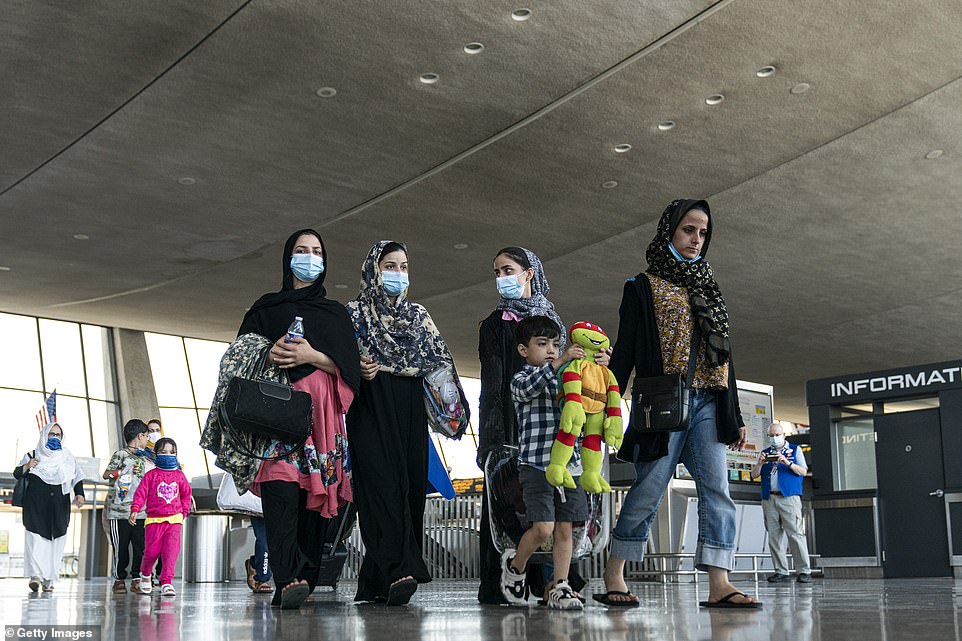