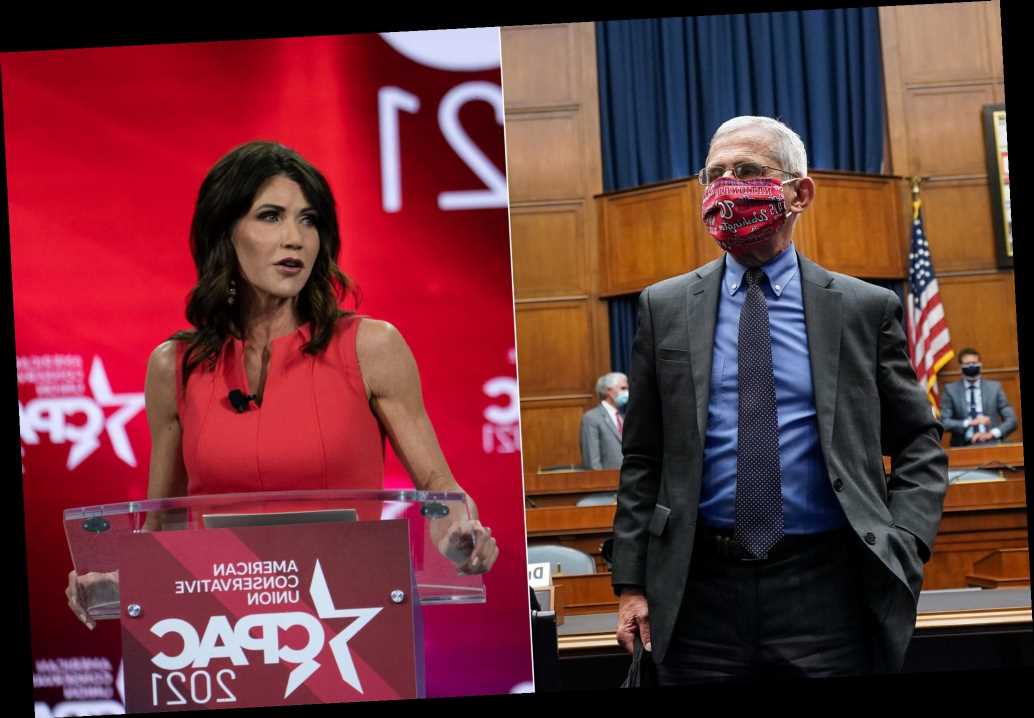 Fauci warns against comparing J&J vaccine to others: ‘Just be grateful’

British invasion: UK variant now accounts for 10 percent of COVID cases in US

“I don’t know if you agree with me, but Dr. Fauci is wrong a lot,” the Republican governor, a staunch supporter of former President Donald Trump, told the raucous crowd in Orlando, Florida, Politico reported.

Instead, Noem touted her personal liberties approach to the pandemic, including forgoing recommendations to require the use of face masks.

“South Dakota is the only state in America that never ordered a single business or church to close,” she said. “We never instituted a shelter-in-place order. We never mandated that people wear masks. We never even defined what an essential business is.”

The governor credited prioritizing hospitalization figures over infection rates — and said Fauci had predicted her state would have 10,000 people hospitalized at its worst.

South Dakota has not surpassed more than 600 hospitalized at one time, according to the COVID Tracking Project. Overall, a total of 6,626 South Dakotans have been admitted to the hospital since the start of the pandemic.

But despite her claims of success, the state — one of the least-populous in the US — has the eighth-highest COVID-19 fatality rate per capita in the country, with 213 deaths per 100,000 residents, according to Statista data as of March 1.

Meanwhile, Fauci, who has led the nationwide COVID-19 pandemic response, pushed back at the slight during an appearance Sunday on CBS’ “Face the Nation,” where he said the governor’s comments were “not really helpful.”

“It is not really helpful. Because sometimes you think things are going well, and just take a look at the numbers. They don’t lie,” the director of the National Institute of Allergy and Infectious Diseases said.

“I’m sure that you can get a standing ovation by saying I’m wrong,” he added.

Appearing after Fauci on “Face the Nation,” Noem defended her handling of the pandemic, saying she gave residents “personal responsibility” over decisions regarding their own health, but also gave them the flexibility they needed “to keep their businesses open.”

“South Dakota is doing well,” she said, according to Politico. “We’ve had some tragic situations, but I know that respecting them in my role, in the authority that I have as governor, has been incredibly helpful to get our state … through this challenging time.”