Father-of-two reveals his drunk online shopping sprees have seen him splash out £4k on bongos, Peter Andre gig tickets and a tank driving experience (as well as adopting a GIRAFFE!) 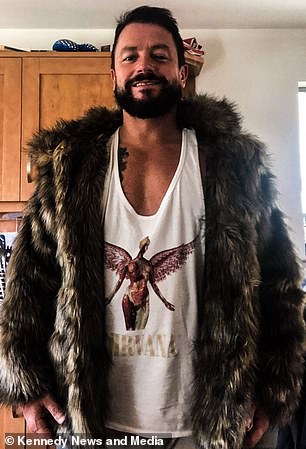 A father-of-two who splurged £4,000 in drunken online shopping sprees over the last seven years woke up one morning to find he’d successfully applied to the TV show Naked Attraction.

David Hayes’ latest buy is a faux fur ‘pimp coat’ he snapped up while ‘blind drunk’ for £52. The garish seventies-style garment attracts so much attention that passersby have been demanding pictures.

The 50-year-old greetings card chain boss, whose drink of choice is double vodka and diet coke, says his bargain-hunting and online applications usually occurs after a night at the pub.

He usually doesn’t remember what he has bought until receiving confirmation emails the following day, often prompting a ‘flashback’.

He awoke one morning to be ‘mortified’ by an email confirming TV bosses wanted him in Manchester for a dating show in which contestants stand before one another naked.

The same day he found he’d bought a swimming pool pump – despite not having a pool. He’s also adopted a lion, giraffe, elephant and an orangutan.

Bizarre buys include an inflatable sofa, four sets of bongos, and a £500 motorhome holiday voucher that expired before he could use it. 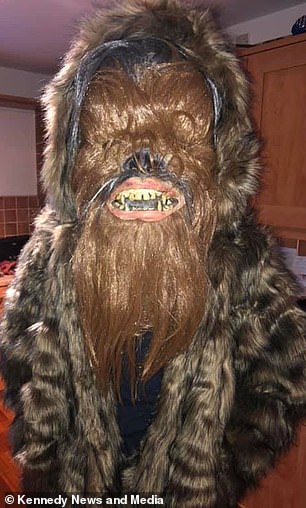 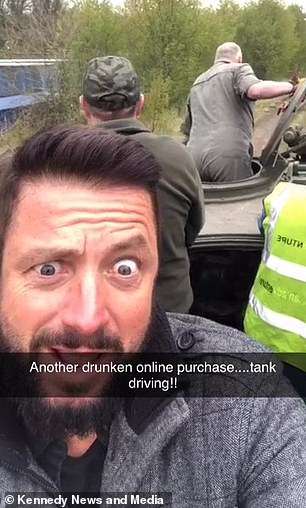 Mr Hayes snapped up a Chewbacca mask (pictured, left) in one spree and also booked himself in for a tank driving experience (right)

Though his latest purchase of the fur coat may have brought fits of laughter from pals at first, he claims they soon changed their tune when he turned up for Sunday dinner in it and they all wanted to take it home.

His only explanation is that when he’s ‘had a few’ he is prone to looking at things he otherwise would not want and thinking ‘I bet that could be useful’.

Mr Hayes, from Seaham, County Durham, said: ‘It’s the best thing I’ve bought over the years accidentally without a doubt, I’m chuffed to bits with it.

‘Everyone who’s seen it – women friends, male friends they all laughed at it after seeing it on Facebook but as soon as they come round they ask to try it on and as soon as they do they love it.

‘It’s the best coat I’ve ever owned, it’s like a 1970s’ “pimp coat” and is that good I wore it to the pub for Sunday dinner once and everyone wanted a photograph with it. 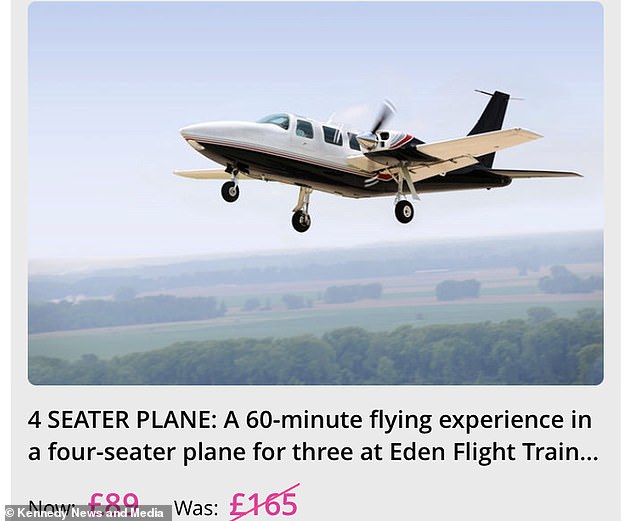 After one night at the pub, Mr Hayes bought a flight experience for his 83-year-old father, despite him having no interest in flying

‘People were trying to put it on and I thought to myself “I can’t take it anymore, it’s going to get ruined”.

‘I had a family party that same day and my mam put it on and she wouldn’t take it off and tried to leave with it. I love my mam to bits, but she’s not having the coat.’

Mr Hayes, who lives with sons Charlie Hayes, 19, and 17-year-old Jake Hayes, said his love affair with tipsy online shopping started seven years ago when he placed an order for a Smokey and the Bandit poster which now has pride of place in his living room. 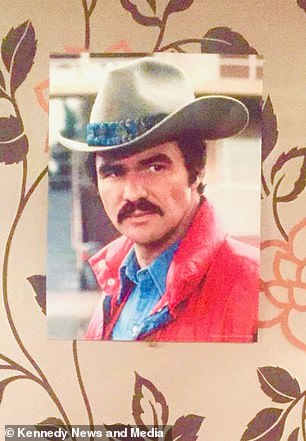 Burt Reynolds fan David said: ‘I love Burt Reynolds and the first thing I bought was the film poster of Smokey and the Bandit.

‘Burt Reynold’s is in a classic pose with his stetson on. I’ve still got it up on the chimney breast in my living room, it acts as a good talking point but when a lot of my sons’ friends come round they have no idea who it is.’

His post-pub shopping became more regular, happening once every six-eight weeks, while lying on his bed after coming home drunk.

‘It’s always on my phone. I normally come in from the pub, lie on my bed and look online. It’s dead easy to buy something as it’s just one click.

‘When I get the confirmation emails the next day I normally get a flashback but with this coat I don’t remember buying it.

‘I remember thinking “I hope I didn’t get the leopard skin one”. I got the more tasteful one out of the two so I was quite pleased about that. I think it’s a woman’s coat but I haven’t got a clue. 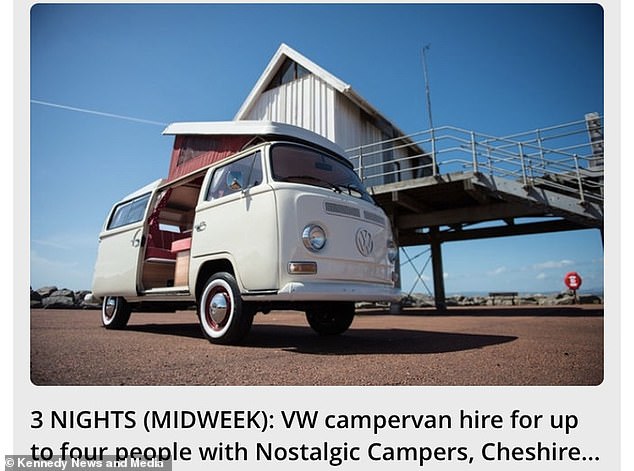 After splashing £500 on vouchers for motorhome hire, the tokens expired before Mr Hayes had even used them

‘I was down the pub and I saw someone wearing a coat like that and remember thinking ‘oh god, I could never wear a coat like that’ but it must have stuck in my mind. Then lo and behold it arrived from China four weeks later.’

The tipsy shopaholic said there’s no definitive reason why he buys the random things he does, but believes he’s ‘inspired’ by what he sees people wearing and footage on TV.

‘There’s not really much thinking behind the things I do buy, I just look at things when I’ve had a few and think ‘ah I bet that could be useful,’ he said.

A SELECTION OF THE THINGS DAVID HAS BOUGHT WHILE DRUNK:

‘Sometimes I watch a film or I’ll see someone wearing something and I’ll think ‘that looks cool’ and it obviously sticks in my mind.

‘I’ve bought a £500 motorhome holiday voucher that expired before I could use it. It had to be used before a certain time and I didn’t have the holidays lined up.

‘I’ve also bought an inflatable settee, four sets of bongos, a £100 Chewbacca mask and a swimming pool pump – despite not having one.

‘I’ve adopted llamas and monkeys for the lads – my mam got an ape last year. I even drunkenly applied to be on the TV show Naked Attraction.

‘I was mortified when the email came back and I was successful- I can’t remember actually doing it.

‘They rang me and said I’d have to attend auditions in Manchester- there’s absolutely no chance whatsoever of me going.

‘The next day you wake up and think “that was a terrible idea”.’

The drunken buying sprees go up a gear when it’s near to family members’ birthdays and Christmas, as he is forced to rely on online shopping.

‘I’ve got my own shops so I haven’t got time to go to shops and do proper shopping really – I do it all online,’ he said. 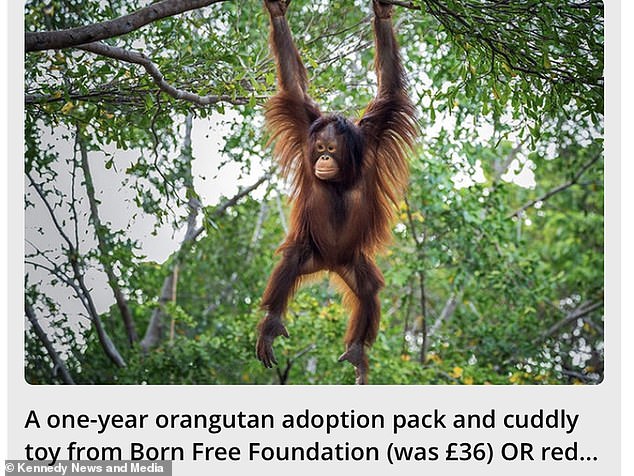 ‘One of the most random things I bought for my brother and his wife was a visit to a sausage factory.

‘They pretended to be pleased about it. Thankfully they’re not vegetarians, that would have been even worse.

‘Last month I took the boys tank driving with a voucher I bought after a few and I got my 83-year-old dad, who’s never expressed an interest in flying, a microlight experience. All those were bought blind drunk.’

Despite accumulating a few ‘useless’ purchases along the way, David isn’t planning on stopping any time soon.

‘When I go out and I’ve had quite a few drinks it’s a running joke with my friends about buying stuff,’ he said.

‘They always say ‘I’ll take your phone off you and drop it back in the morning’ – I’ve never let them do that.