Father pleads with council to reverse its order to bulldoze his brand new luxury home for being 2.5ft too high as he insists it was built according to planning permission

A family-of-seven whose home could be demolished for being two and a half foot too tall insist it was built according to planning permission.

Asif Naseem has urged Stoke-on-Trent City Council to review their decision after they refused to grant him retrospective planning permission that would allow his home to remain.

He claimed the Sandwell Place property was built according to the plans he received permission for in 2016. 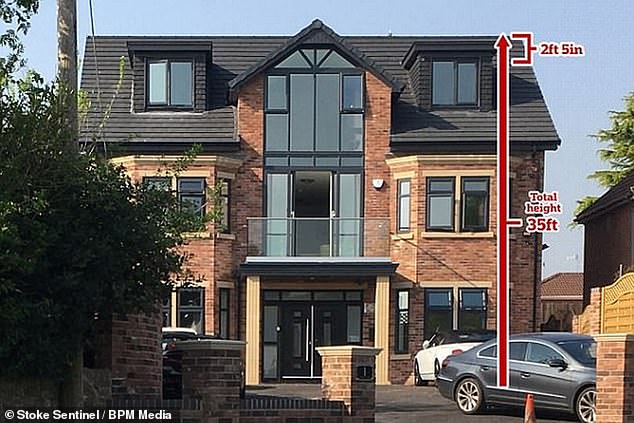 Mr Asif Naseem’s new-build home in Lightwood, Staffordshire, could be bulldozed after councillors decided to back enforcement action. The house is 2ft 5in (marked in red) taller than what the original plans showed as foundations were not dug deep enough

However a failure to dig the foundations deep enough mean the property was 2ft 5in taller than expected.

The council had deferred making a decision for six months to see if a compromise could be achieved.

As part of the proposal, Mr Naseem suggested reducing the height of his central glazed gable by 0.7m and remove the two dormer windows within the roof slop and replace them with roof lights.

But their latest application was slapped down and the family-of-seven now face seeing their home flattened.

Mr Naseem said: ‘A lot of people think there was no planning permission for this house to be built, whereas we had full permission for it. They are saying the third storey shouldn’t be there.

‘That’s false – the house was built exactly as it should be. The dormer windows on the third floor have always been in the plans.

‘The only problem the house has got is it is 2ft 5in taller than it should be – that’s to do with the foundations.’

Mr Naseem added a planning enforcement officer visited the site during the construction in 2017, and the city council had the chance to stop further work.

‘If I was doing something wrong she should have stopped the work. But she did nothing like that,’ he said.

‘She told me to put in a retrospective planning application and now this minor thing has become a huge thing.

‘I’m not happy with the city council. This issue is their making.

‘If there is a rule for one it should be there for the other – it’s not fair on the other person.’

So far, Mr Naseem said he has spent £500,00 on the building project since development plans were approved in 2016. To lower the roof would cost an additional £200,000 – money he said he does not have.

Case officer Karen Kent recommended refusal of the latest application, saying the alterations did not address the problems with the application.

In her report she wrote: ‘The submissions follow the refusal of two applications for the retention of the dwelling as constructed and the subsequent authorised enforcement action for its demolition.

‘Both applications have been assessed within the following report as although the procedural nature of both differs, the principal planning issues raised by the applications are the same. 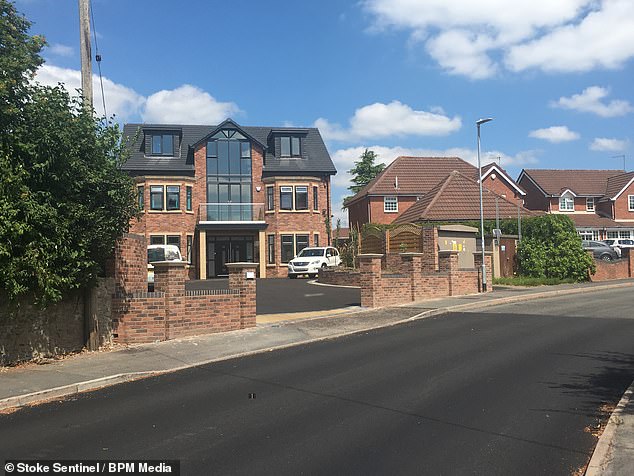 ‘The applications have been considered against all material planning considerations and both are recommended for refusal.’

Councillors backed the ruling and said planning laws must be enforced.

Councillor Ross Irving said: ‘The main problem with this seems to stem from lack of excavation at original conception, it threw the whole thing off kilter and that’s why we’re here today. Why wasn’t it excavated to the required level?

‘We have a duty of care to make sure residents can live their lives without this impacting them.’

This was backed up by councillor Janine Bridges who said: ‘I have got sympathy with the applicant.

‘We’re bound by the laws of the land, if we don’t follow them there would be anarchy.’

Councillor Andy Platt said he didn’t want to see the property flattened and hoped a compromise could still be reached.

He added: ‘To take down the building would be really disproportionate.’