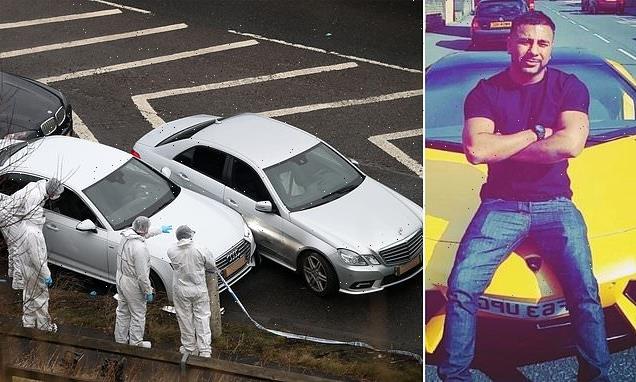 A father-of-two shot dead by an armed officer when police stopped an Audi on a motorway slip road was lawfully killed, an inquest ruled today.

Yassar Yaqub, 28, was the front passenger in one of two cars travelling together along the M62 when they were surrounded by four unmarked police vehicles close to junction 24 in Huddersfield, West Yorkshire, on January 2, 2017.

A six-week inquest into his death at Leeds Crown Court heard that, following the stop, Mr Yaqub ignored a command to ‘show me your hands’.

He instead ‘crouched down’ before raising a handgun over the car’s dashboard, an officer told the hearing.

The officer, identified only as V39 during proceedings, said he leaned out of his car window and fired three shots at Mr Yaqub from 1.5 metres away.

Two of the bullets struck him in the chest, causing ‘catastrophic blood loss’. He was pronounced dead at the scene.

V39 said he had feared for his life and ‘had no alternative’.

Giving its conclusion today, the jury concluded that V39 ‘honestly believed that a firearm was being aimed at him, his life was in danger and he used reasonable force discharging his firearm’. 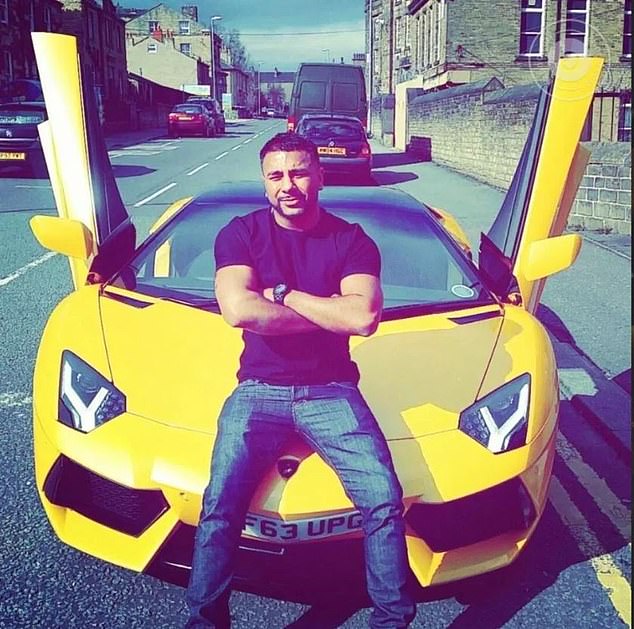 Yassar Yaqub, 28, was the front passenger in one of two cars travelling together along the M62 when they were surrounded by four unmarked police vehicles 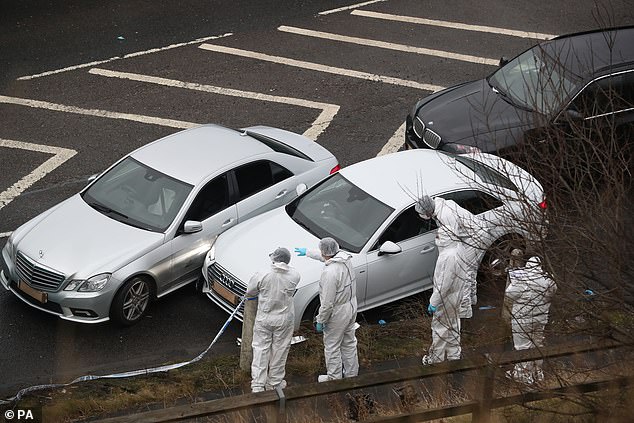 A jury concluded that V39 ‘honestly believed that a firearm was being aimed at him, his life was in danger and he used reasonable force discharging his firearm’

Mr Yaqub had earlier been described by police intelligence as a ‘highly active criminal’, the jury heard, with an operation set up in October 2016 in response to alleged threats he and another man had been making.

V39 was the passenger in one of the police vehicles following Mr Yaqub and his associates on January 2, 2017, from Akbar’s Cafe in Bradford.

After driving on the M62 towards Huddersfield, the police made the stop at the junction known as Ainley Top.

Three other men were arrested during the stop and a non-police issue firearm was recovered from the footwell of the vehicle where Mr Yaqub had been sitting.

A probe by the police watchdog also found no evidence that any officer committed a criminal offence or breached professional standards.

Steve Noonan, director of major investigations at the Independent Office for Police Conduct, said: ‘Our thoughts remain with the family and loved ones of Yassar Yaqub, as well as all those affected by his death, at this difficult time.

‘It is vital that any use of lethal force by police is thoroughly and independently scrutinised. Our independent investigation was comprehensive and detailed, helping provide clarity on the events of January 2, 2017.

‘At no stage during the investigation did the evidence indicate that any officer may have committed a criminal offence or breached the standards of professional behaviour.

‘We previously published our recommendations, which were accepted by West Yorkshire Police, based on the findings of this investigation. However, there was no indication the issues we identified had any direct impact on the outcome of the police operation.

‘Our work was shared with the coroner and included among the evidence used by the jury in reaching their conclusion, which is consistent with our own findings. I am grateful to them for their careful consideration of this case. 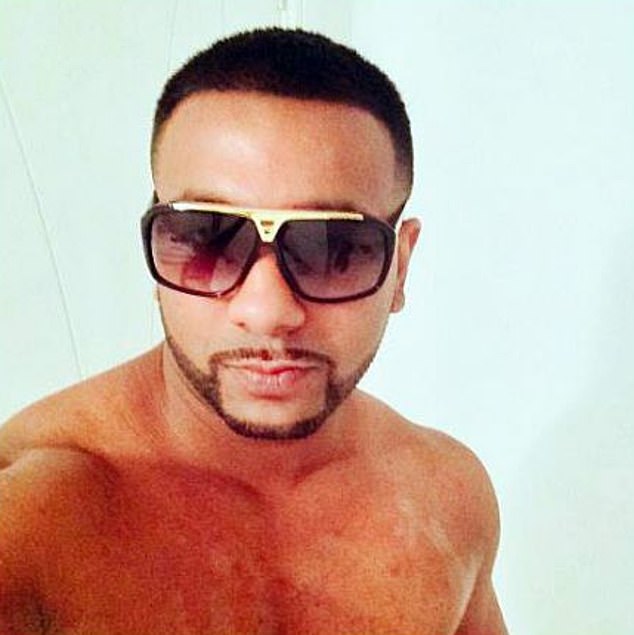 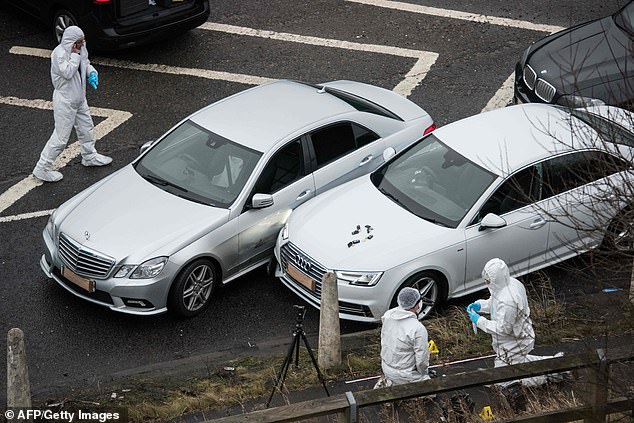 An officer leaned out of his car window and fired three shots at Mr Yaqub from 1.5 metres away. Two of the bullets hit him in the chest and caused ‘catastrophic blood loss’

‘I would like to once again offer our sincere condolences to Mr Yaqub’s loved ones.’

And in a separate statement today, West Yorkshire Police Chief Constable John Robins said: ‘The loss of life in any circumstances is, of course, tragic and our sympathies remain with the Yaqub family for the loss of their loved one.

‘But I also want to acknowledge how difficult the past five to six years have also been for the officers and staff who were directly involved.

‘This has been a constant in their lives, from the incident itself, the criminal prosecutions, the investigation by the Independent Office for Police Conduct and finally the recent inquest itself.

‘During the IOPC investigation, officers and staff were rightly treated as witnesses throughout. The outcome of that investigation did not raise any criminal or misconduct issues for any officers or staff.

‘During the inquest I followed the daily proceedings. My overwhelming impression was of the professionalism, knowledge, expertise and compassion displayed by all the officers and staff involved.

‘I hope that people will now see that the tragic loss of life, unfortunate as it was, was necessary to keep the public safe in what was a rapidly unfolding and dangerous situation.

‘It is thankfully rare that any police action results in the death of an individual. When it does, it is right that we are open to full scrutiny, just as in this case.

‘The actions of all involved have been scrutinised by both the IOPC and now by a Jury before a Coroner.

‘The inquest has provided a clear and transparent understanding of what happened. Our sole intention was to safely detain Mr Yaqub and to remove illegally held firearms from our streets. 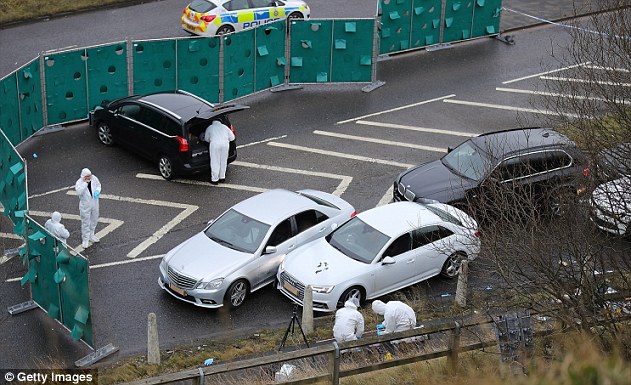 ‘However, as events rapidly unfolded, it is obvious that the threat at the time was real and as a result an officer had to take the necessary and proportionate action.

‘Firearms officers perform a highly skilled and incredibly demanding role. They are brave and courageous people, who keep us all safe.

‘I believe the individuals who make up West Yorkshire Police’s firearms teams are amongst the best in the world. It is a job that carries a huge responsibility and sometimes means making the hardest of all decisions.

‘Police officers and staff face dangers every day to keep the public safe. I am proud of them and the work they do. But they can only do it with the support and understanding of all of the communities we serve and I remain committed to policing being professional, open and transparent.

‘So, I hope that the inquest has helped explain in detail what occurred in the lead up to the death of Mr Yaqub’