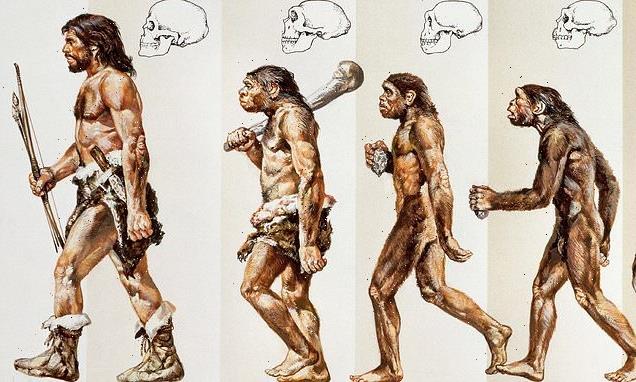 It’s the diagram of evolution we’re all familiar with – starting with an ape figure which slowly turns into an upright human.

But the famous depiction of the history of man should be ‘expunged from the record of everything’, according to an expert.

Dr Adam Rutherford, a geneticist at University College London, said the diagram portrays ‘wronger things about evolution than anything else’. And he argues it should be removed from biology books.

Speaking at the Cheltenham Science Festival, he said the image of a ‘line of men starting with a monkey who slowly get more upright to a white guy with a beard’ was damaging for understanding the science of evolution.

He added: ‘It implies a directional sophistication and intelligence. It’s from a textbook in 1965, and if I had one wish I would expunge it from the record of everything.’

Dr Adam Rutherford, a geneticist at University College London, said a famous diagram of human evolution portrays ‘wronger things about evolution than anything else’. And he argues it should be removed from biology books

The original diagram, named The Road to Homo Sapiens, begins with Pliopithecus, a 22million-year-old ‘ancestor of the gibbon line’. It depicts 14 other primate figures, ending with the ‘modern man’. A simplified version is also widely circulated.

Dr Rutherford said the image ‘points to the idea that evolution has a direction… It suggests that there are ape-like ancestors and they begin to walk upright and eventually become us and it goes in a very nice, neat line.

‘This isn’t how evolution works at all. We evolve to occupy whatever environmental niche we’re in at that time…

‘We quite easily in the future could evolve into a completely different shape or go back to being quadrupedal [walking on all fours]. That’s just how evolution works. The idea that evolution ‘improves’ is not correct.’

He said all organisms – from a human on the plains of Africa to a tiny insect – have adapted to exist in their environment. ‘It’s a very human, hubristic point of view, that we think of ourselves as the pinnacle of evolution,’ he added.

Dr Rutherford said the fact the diagram is still widely circulated is ‘not the biggest crime in the universe’ but it is ‘mis-informative’.

‘It also implies we know the route of evolution,’ he added. ‘Apart from the relationship between Neanderthals and us, which is that they were our ancestors, we don’t really know what our ancestors were.

‘We’ve got loads of theories and loads of specimens of older humans, but we can’t draw lines between those and us.

‘That picture says ‘this is the route’ and even names them. But I think one of the most important things in science is teaching people what we don’t know, rather than just what we do know.’

He said the diagram should be ‘much messier’ and ‘much more like a network’.