Stunning fairytale-style castle with panoramic coastal views, a cave-like swimming pool complex and sauna goes on the market for £4million

A stunning fairytale-style castle on the coast that looks like it is straight from the pages of a children’s book and comes complete with its own moat and drawbridge is on the market for £4million.

An Culu looks historic but is actually only 20 years old and was nothing but a small ruined tea room folly when English entrepreneur Kevin Reardon spotted it on the shore from his fishing boat.

He spent a fortune creating and furnishing the neo-Gothic castle in County Kerry, Ireland, which has castellations, turrets, a moat and drawbridge.

Inside the five-storey building there are five en-suite bedrooms, a cave-like swimming pool complex and sauna. 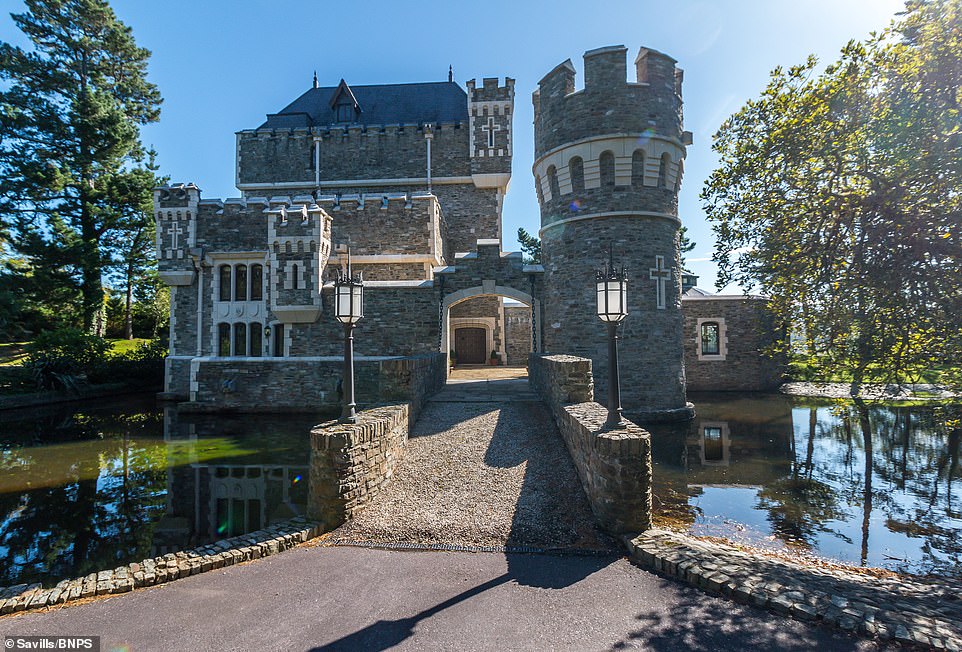 An Culu on the shore of Kenmare Bay, County Kerry, Ireland, has its own drawbridge leading to a courtyard with lanterns 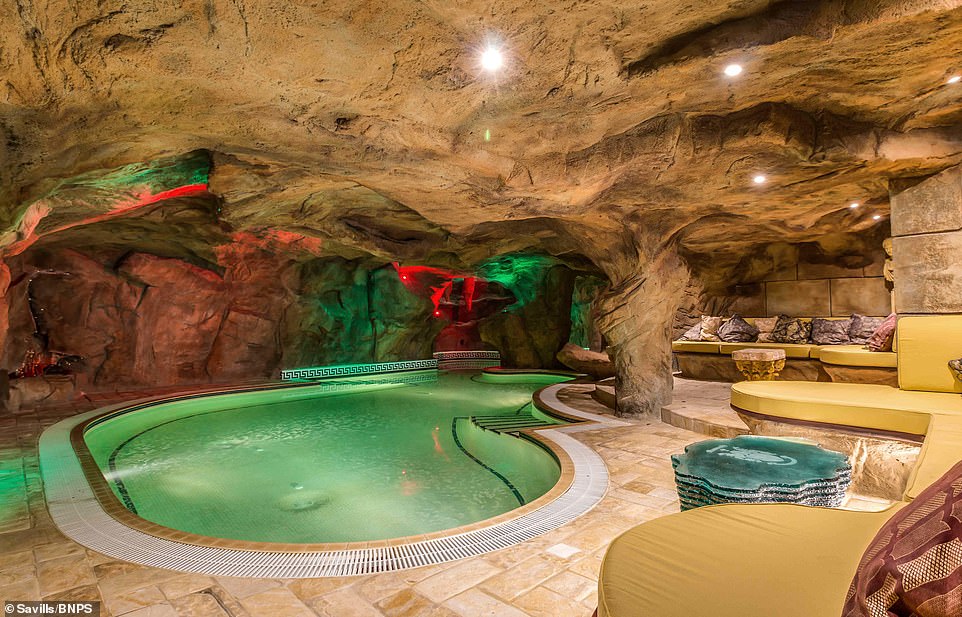 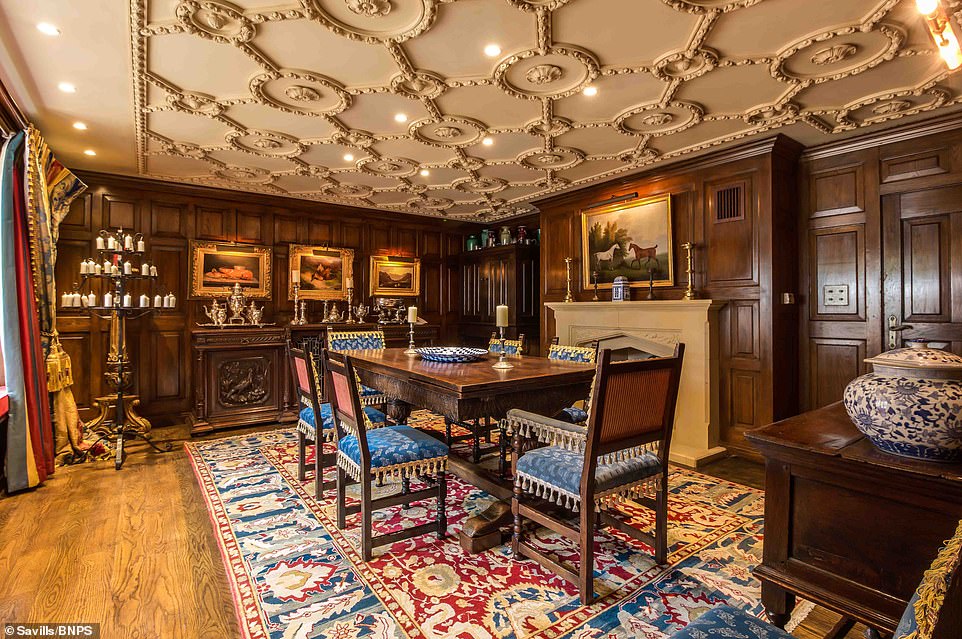 The castle is on the shore of Kenmare Bay, Ireland, and has panoramic views over the water and beyond to the Caha Mountains.

Mr Reardon, from London, initially thought the ruin he had spotted was a small medieval castle, but it turned out to be a tea room folly built for a neighbouring estate.

He spent two years convincing the local forestry board to sell him the land and said he never intended to build a castle but planners said it needed to be, so he decided to create a proper fairytale castle.

Mr Reardon had the property built to an exceptionally high standard with lots of grand features that give it the feel of an older building, such as intricate plasterwork, cornicing and impressive fireplaces.

Unlike most historical castles, which are dark and draughty, An Culu has been designed to be a warm and comfortable family home. 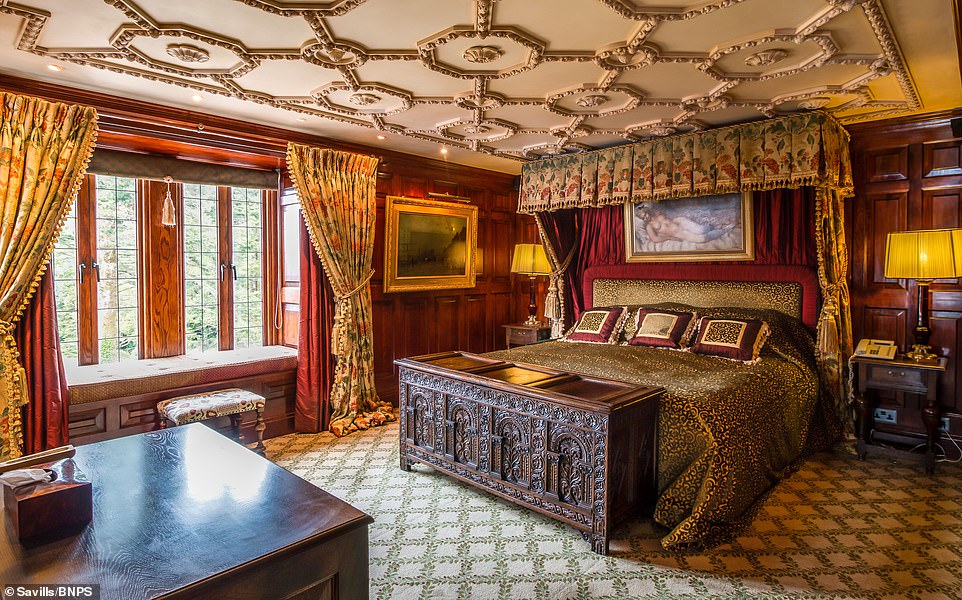 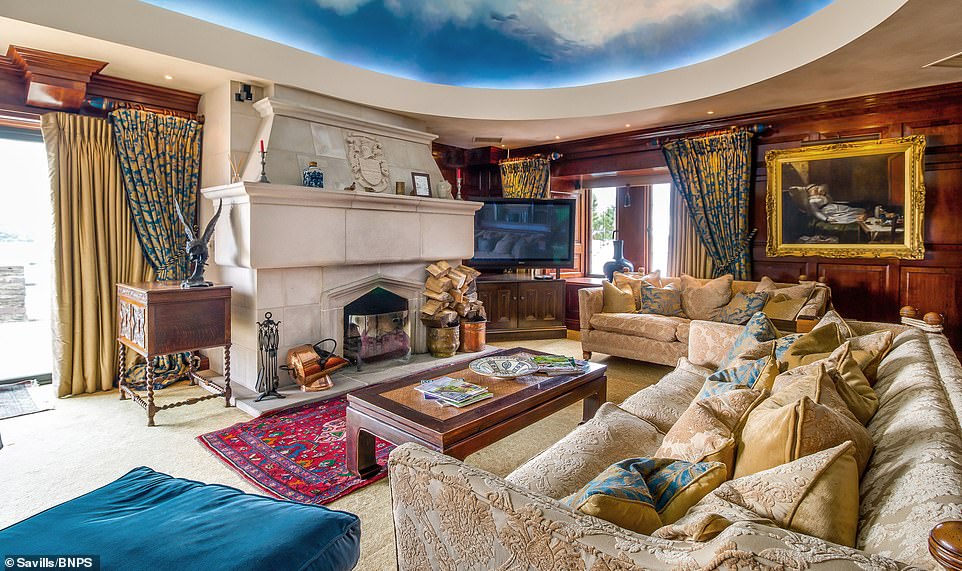 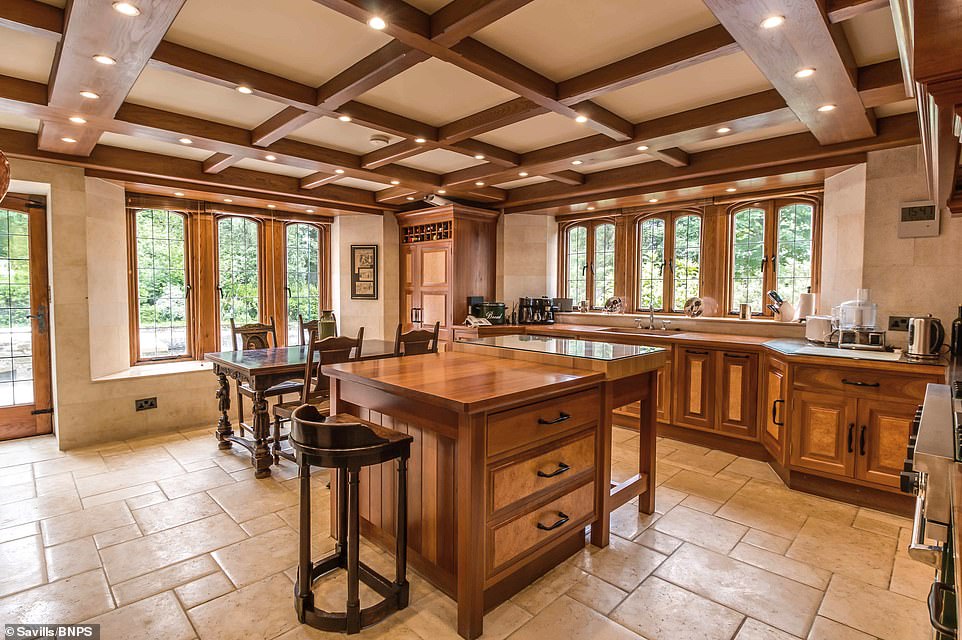 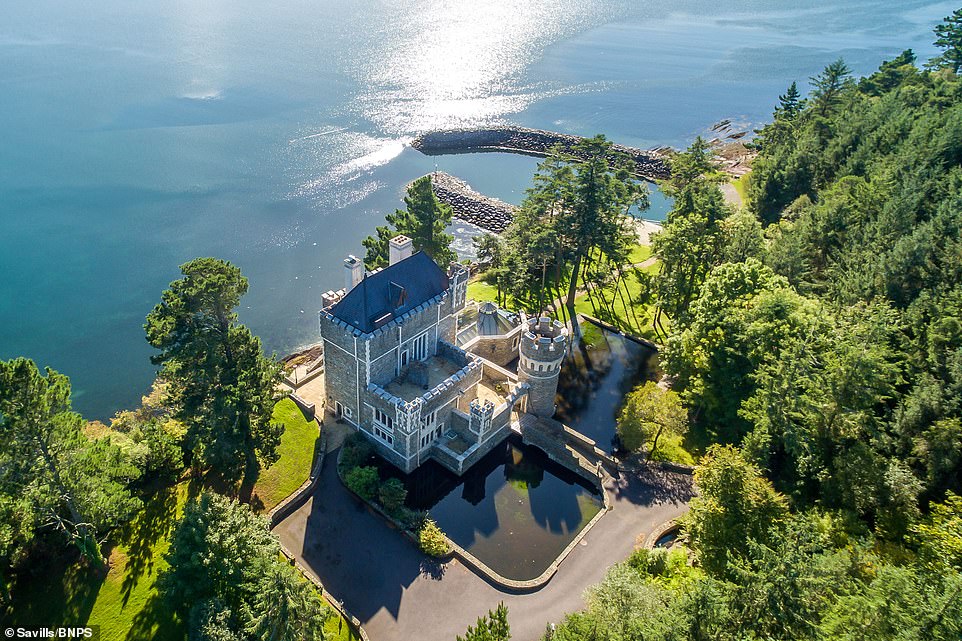 The original tea house tower he first spotted has been blended into the new property.

The castle is surrounded by a moat and approached from the drive over a drawbridge beneath a castellated archway to a courtyard with lanterns.

In the grounds there is a rock face with cascading waterfall, the property is surrounded by woodland and there is a road down to its own harbour with a floating jetty and harbour wall.

It is the perfect home for a country gent with excellent fly fishing on offer and several top-ranked golf courses nearby.

James Butler, from estate agents Savills, said: ‘An Culu is a magnificent contemporary castle in one of the finest situations I have come across in the whole country.

‘You’ve got direct water access but it’s also very private because it has a backdrop of forest and there are no near neighbours. 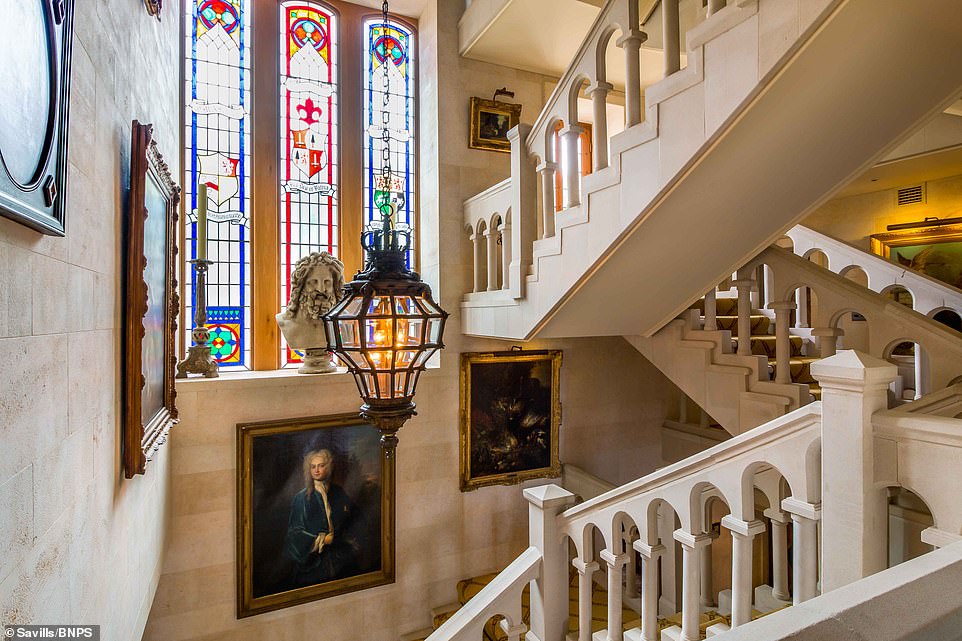 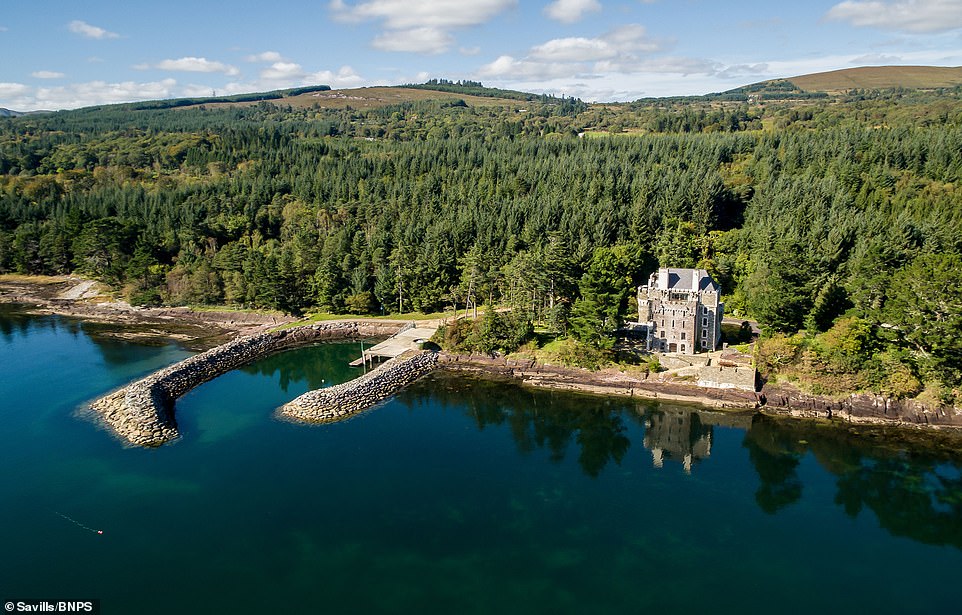 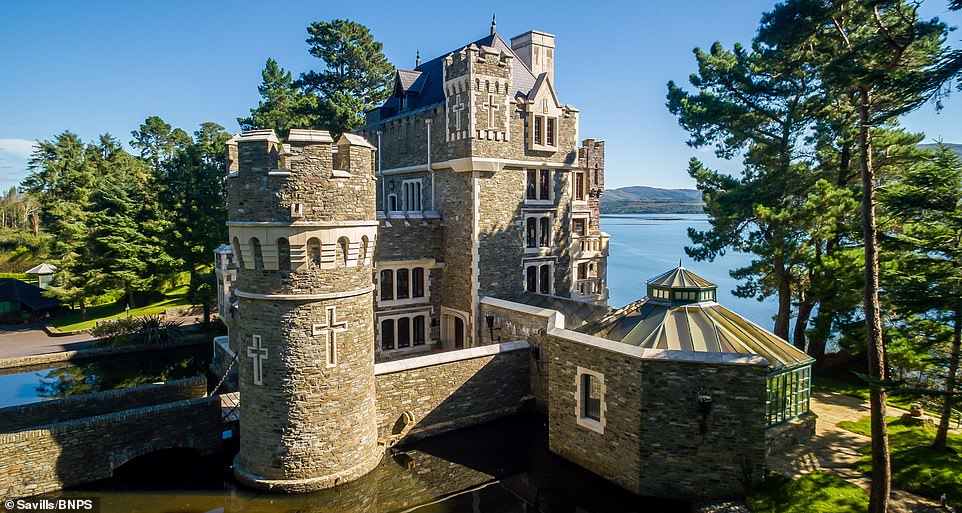 ‘The castle itself looks like it’s been there for hundreds of years but it’s actually only 20 years old. It’s traditional looking but it’s been designed for modern living, you don’t have the uneven floors or draughtiness of an old castle.

‘No expense has been spared, it’s got the best fittings and furnishings and the underground swimming pool grotto is surprising but it works very well.

‘It’s a great house for entertaining, because of the bedroom suites and the grandeur of the reception rooms.

‘I think it would appeal to someone looking for a base in Ireland where they can have complete privacy and enjoy the fantastic outlook.

‘It would appeal to a sailing enthusiast, the harbour is one of the finest private harbours I’ve seen. From there you could sail to America if you wanted.

‘You don’t get many properties like this, where it doesn’t need any money spent on it. It’s the finished article.

‘It’s a once in a generation opportunity.’