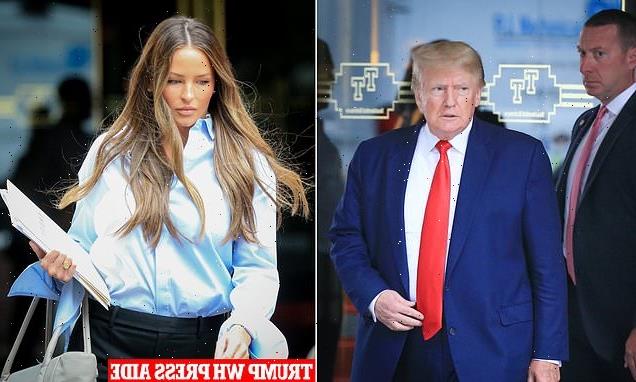 Donald Trump appeared unbothered walking out of his Manhattan Tower Wednesday afternoon with his mid-twenties communications aide Margo Martin – the same day he raged at a report the FBI seized his medical history in the Mar-a-Lago raid.

Another aide placed a large stack of loose paperwork into the vehicle that Trump boarded in his motorcade out of New York City, according to images obtained exclusively by DailyMail.com.

The departure from Trump Tower comes as a report emerged Wednesday that Trump was keeping at his Mar-a-Lago home nuclear secrets for an unnamed foreign nation, which were found in the FBI raid of the former president’s residence last month.

The former president spent two days in the city he once called home – before fleeing to Florida and naming his Palm Beach estate his new permanent residence after leaving the White House. 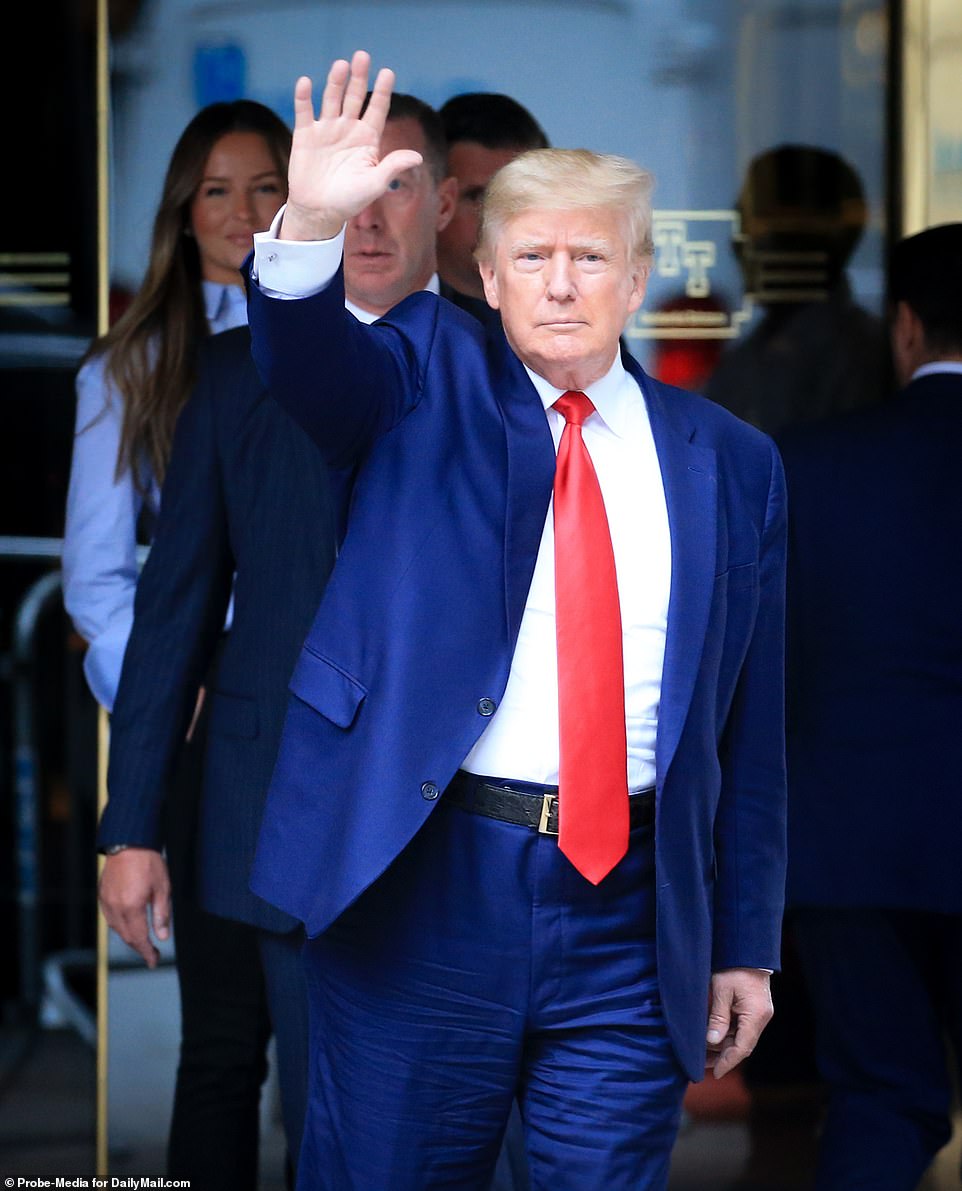 Donald Trump stepped out of Trump Tower in Manhattan on Wednesday after spending two days in the Big Apple, photos exclusively obtained by DailyMail.com show 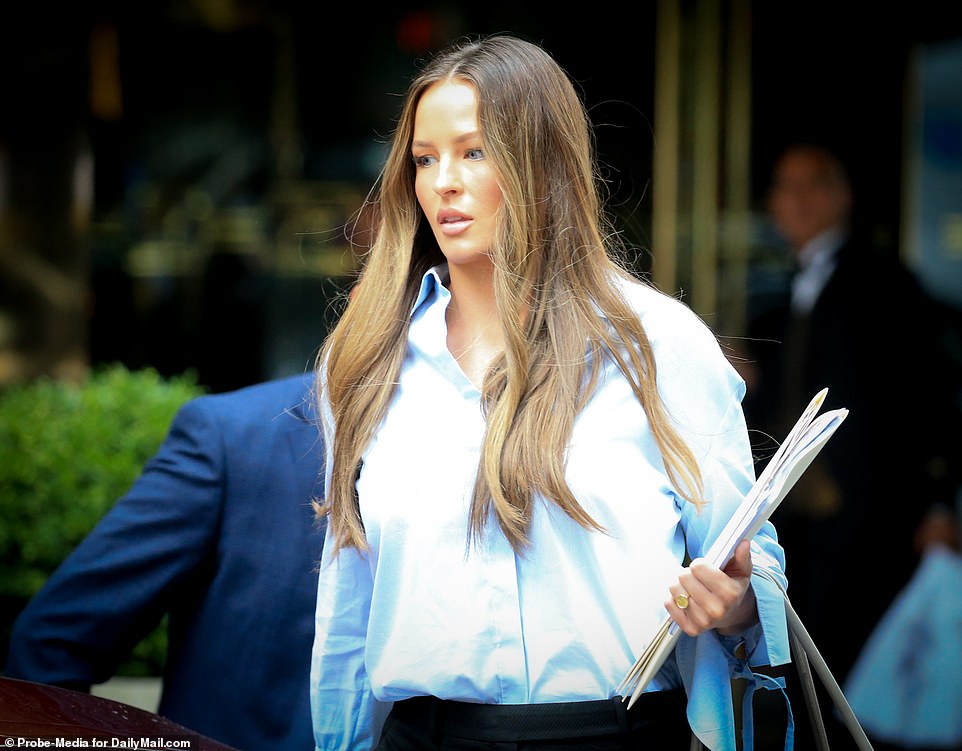 Joining the former president in his ride out of the city is top communications aide Margo Martin, who served as a press assistant for the previous White House and stayed with Trump to become his Deputy Director of Communications for his Save America PAC

Martin, who left with Trump’s team on Wednesday, served as a White House press assistant during his presidency and was one of the few to remain on with the former president’s team beyond his White House tenure.

She is now the Deputy Director of Communications for Trump’s Save America PAC, which is used mainly to send emails to supporters and organize his continued rallies across the country.

Margo famously was the communications aide who gave the final press lid for the Trump administration. The moment was caught on camera and spread on social media where she said: ‘And one last time for the Trump White House, you have a travel photo lid.’ 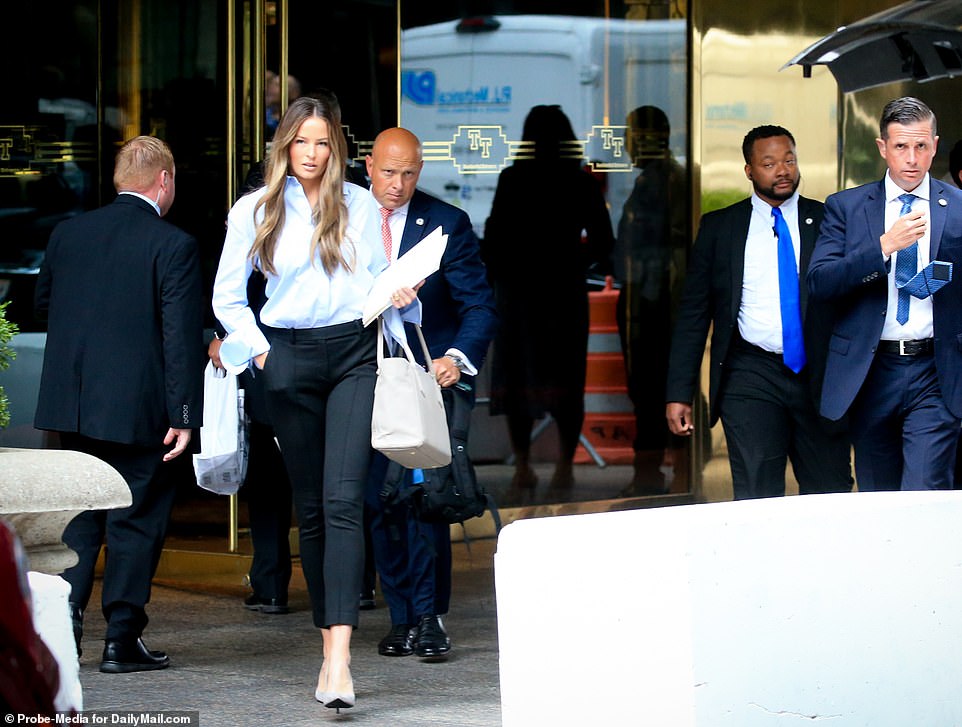 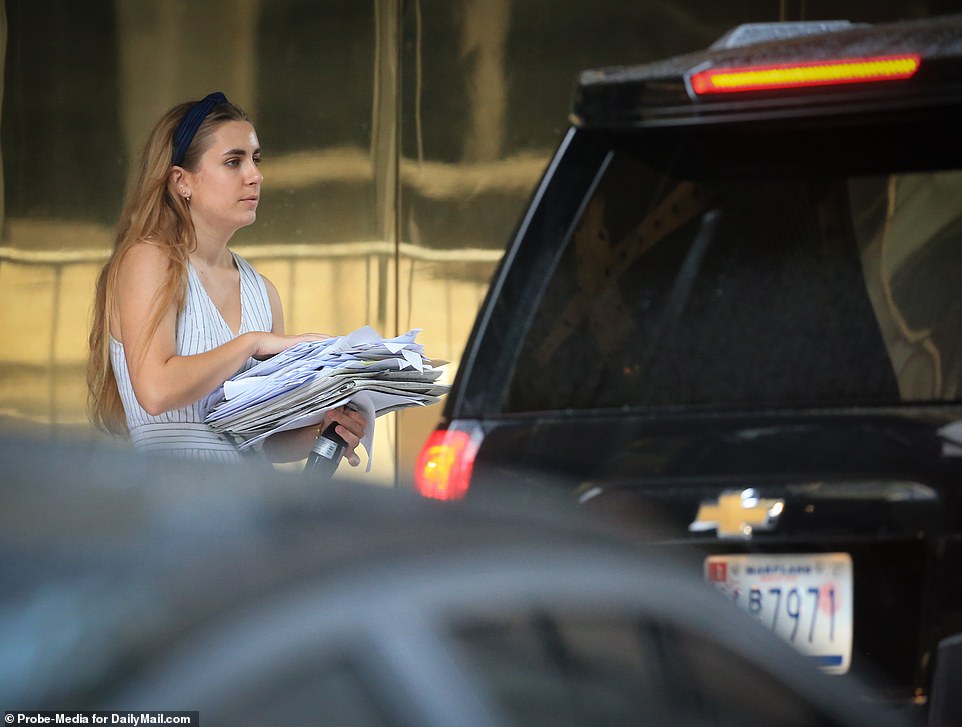 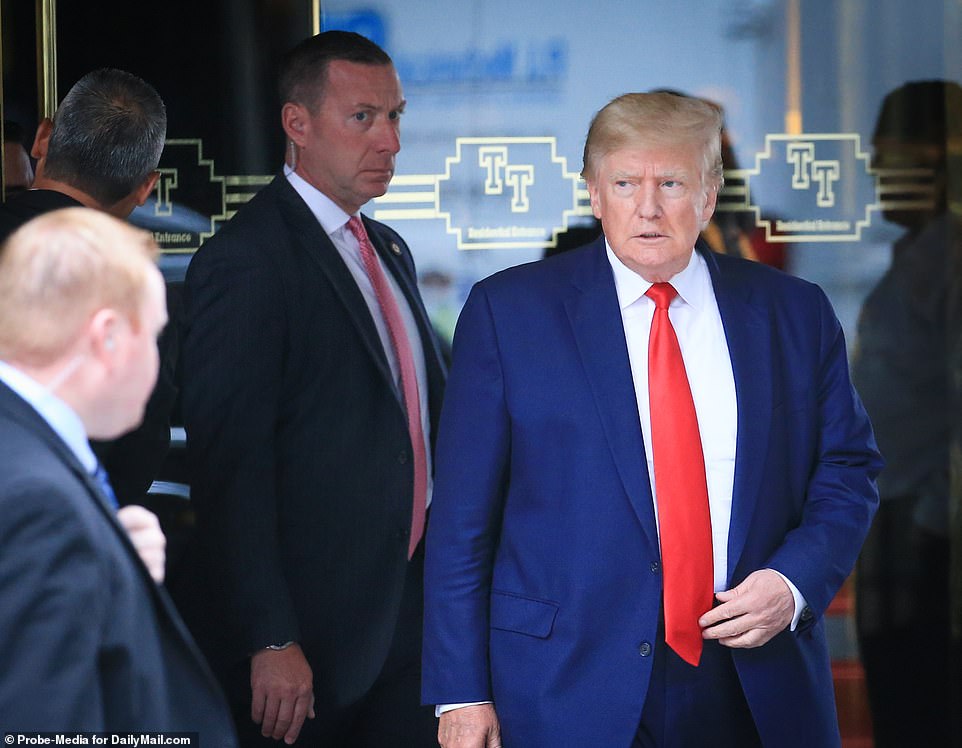 Trump’s outing comes the same day a report emerged that he was keeping at Mar-a-Lago nuclear secrets for an unnamed foreign nation, which were found in the FBI raid

The documents recovered from Mar-a-Lago on the foreign nation’s nuclear defenses required such a high level of clearance, FBI agents and even senior members of President Joe Biden’s administration were not allowed to view them, according to a new bombshell report from The Washington Post.

The report did not include the name of the country whose nuclear readiness was held in an unsecure location.

This document was among the more than 11,000 materials recovered in the August 8 raid of Trump’s Florida estate, according to an itemized breakdown of what was found. Some of the documents include classification banners and markings.

Trump slammed the FBI and Justice Department on Wednesday, claiming that certain items were ‘improperly’ obtained and removed from his home.

‘Not only did the FBI steal my Passports in the FBI Raid and Break-In of my home, Mar-a-Lago,’ Trump lamented on his alternative social media site Truth Social, ‘but it has just been learned through court filings that they also improperly took my complete and highly confidential medical file and history, with all the bells and whistles (at least they’ll see that I’m very healthy, an absolutely perfect physical specimen!), plus personal Tax Records (Illegal to take), and lawyer/client/privileged information, a definite NO, NO.’

He claimed it was reminiscent of the ‘Days of the Soviet Union!’

The DOJ is investigating Trump for removing government records from the White House after he departed in January 2021 and storing them at Mar-a-Lago – in direct violation of the Presidential Records Act. 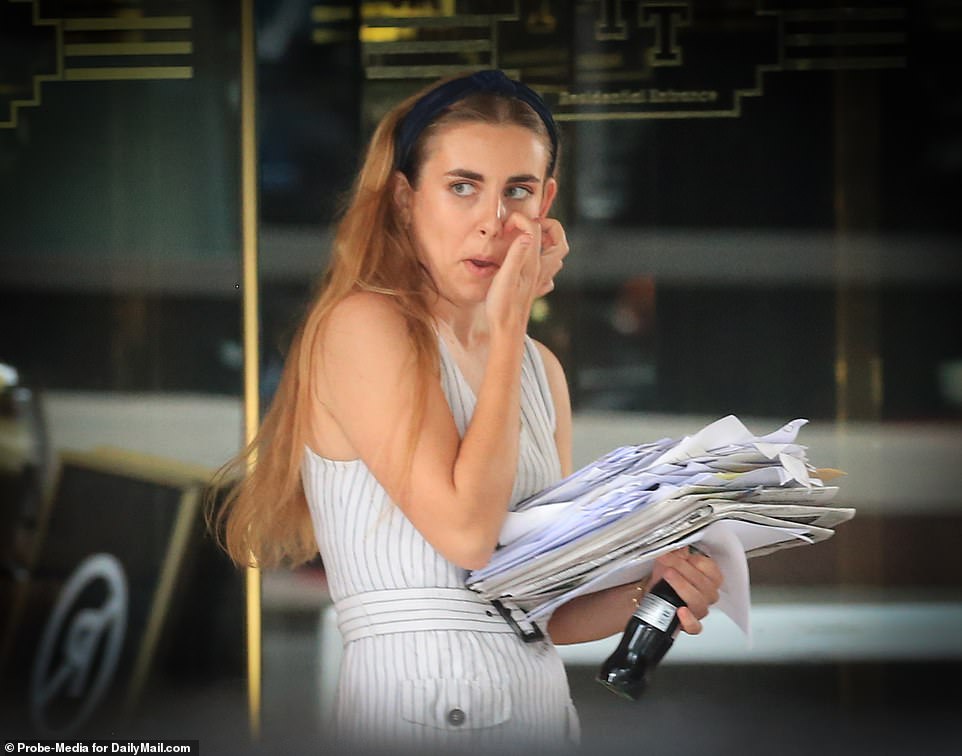 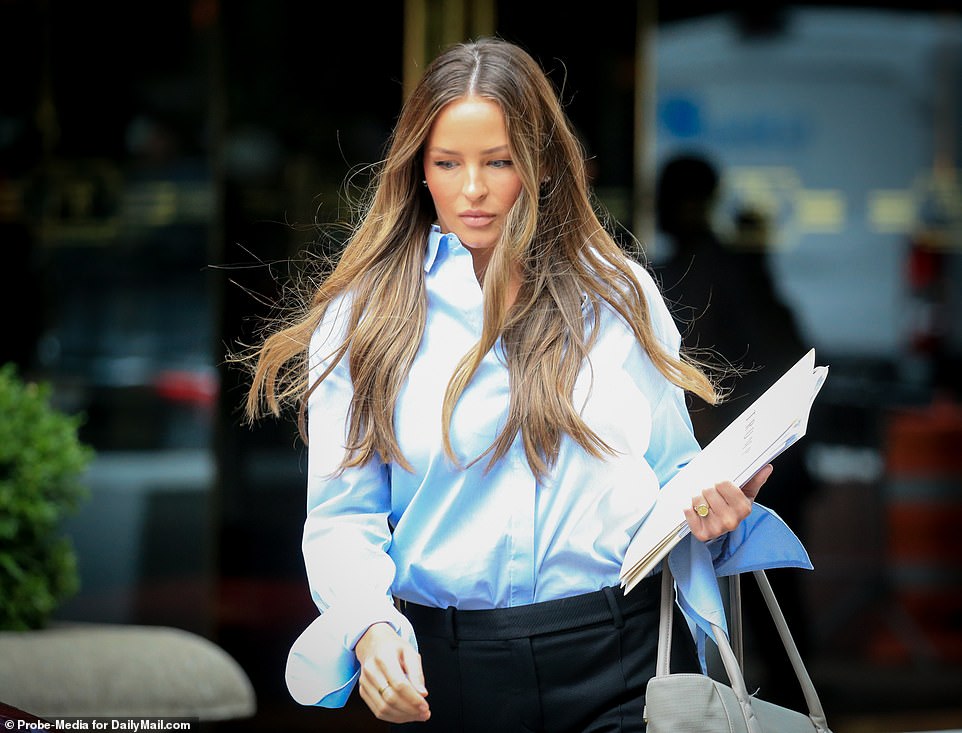 Martin steps out into Manhattan from Trump Tower. The mid-twenties aide was a press assistant for the Trump administration and stayed on Trump’s team when he ended his White House tenure to join the Save America PAC as the former president’s deputy director of communications 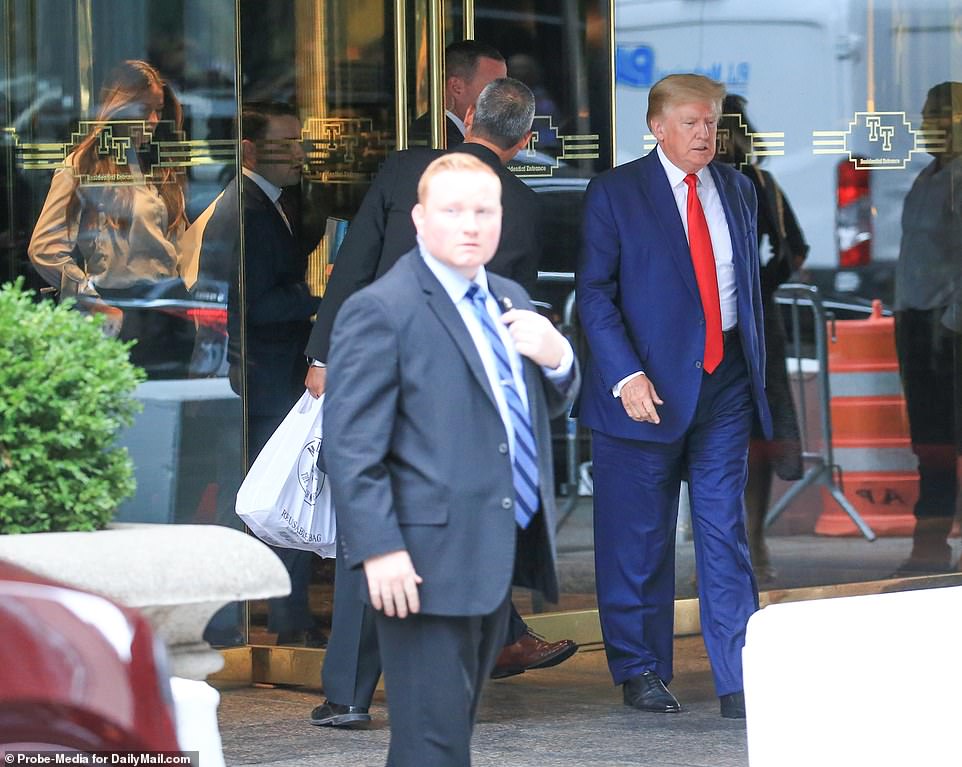 Trump entered the car where his aide brought papers and a diet coke in the Secret Service motorcade before the convoy headed to the Midtown tunnel and headed east out of NYC. Martin can be seen existing  the building right behind the former president 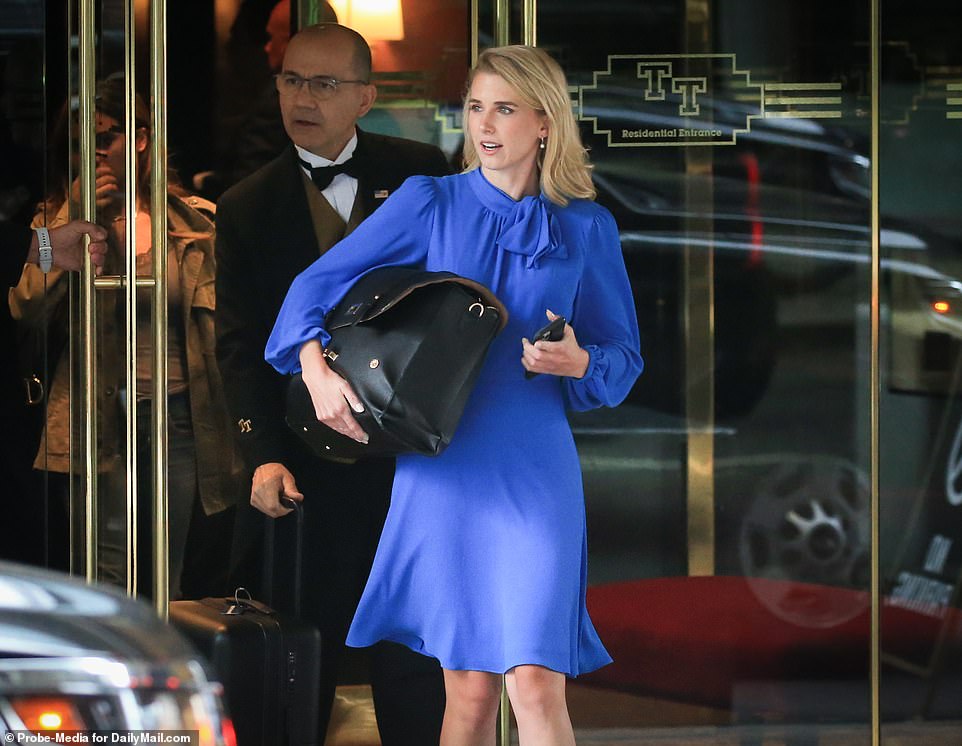 But the Trump team scored a victory this week in the case when a federal judge in Florida granted the request for a special master review of the documents seized during the raid.

The Trump-appointed judge also ‘temporarily enjoins’ the government from ‘reviewing and using the seized materials’ pending the completion of the review.

That grants Trump and his legal team a side benefit of stalling the fast-moving proceedings that have unfolded since the August 8 FBI search of Mar-a-Lago. Any potential appeal by the government could slow down proceedings even further.