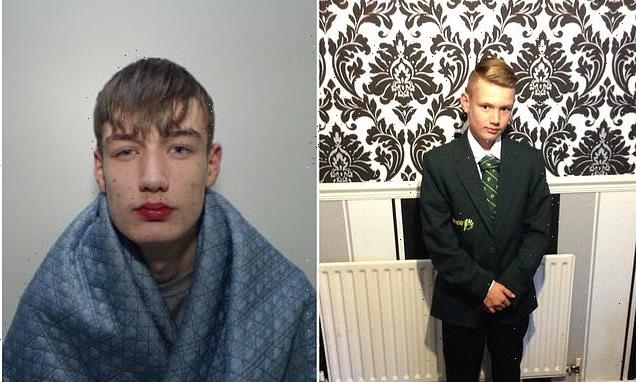 Ex-pupil, 19, beat up 10 boys at random outside secondary school because he was haunted by memories of being bullied there

A teenager beat up ten boys outside the gates of a secondary school after being haunted by memories of being bullied there as a pupil.

Rian Power, 19, left one schoolboy of 14 with a broken nose and others with cuts and bruises after attacking them at random as they walked to classes.

During his attack on the 8am school run, Power falsely accused victims aged between 13 and 15 of picking on his cousin before punching them in the face or giving them a kicking.

The youngsters ran away in tears to staff at 1,135 pupil Wardle Academy in Smallbridge near Rochdale, Greater Manchester before teachers alerted two police officers who had been invited there to give a presentation. 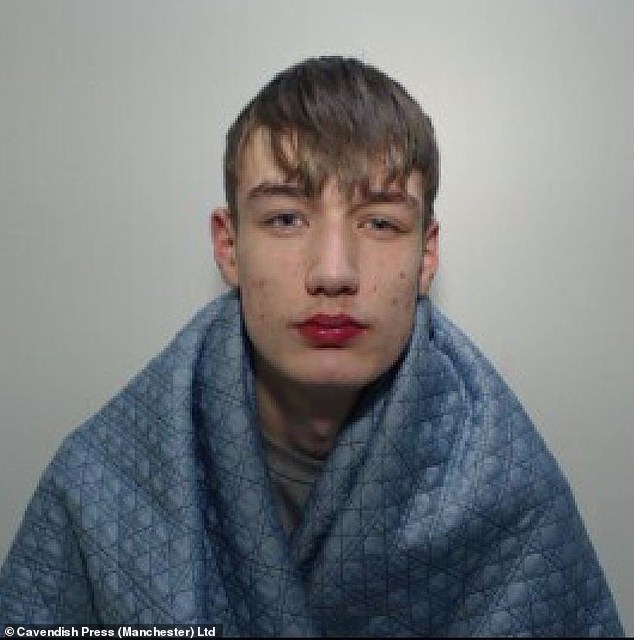 Power who claims he had been bullied by former classmates due to his autism and ADHD was arrested following a short chase. It emerged he had been up all night drinking cider and snorting cocaine and had just been banned from a local store for remonstrating with a shopkeeper.

He claimed his cousin had told him he was being picked up on at school and said it ‘triggered’ harrowing memories of his own bullying ordeal.

But in statements given to the police the boys said the incident had left many of them too frightened to walk to school on their own. Staff gave the victims ice packs to treat their wounds and some had mild concussion or headaches for several hours afterwards. 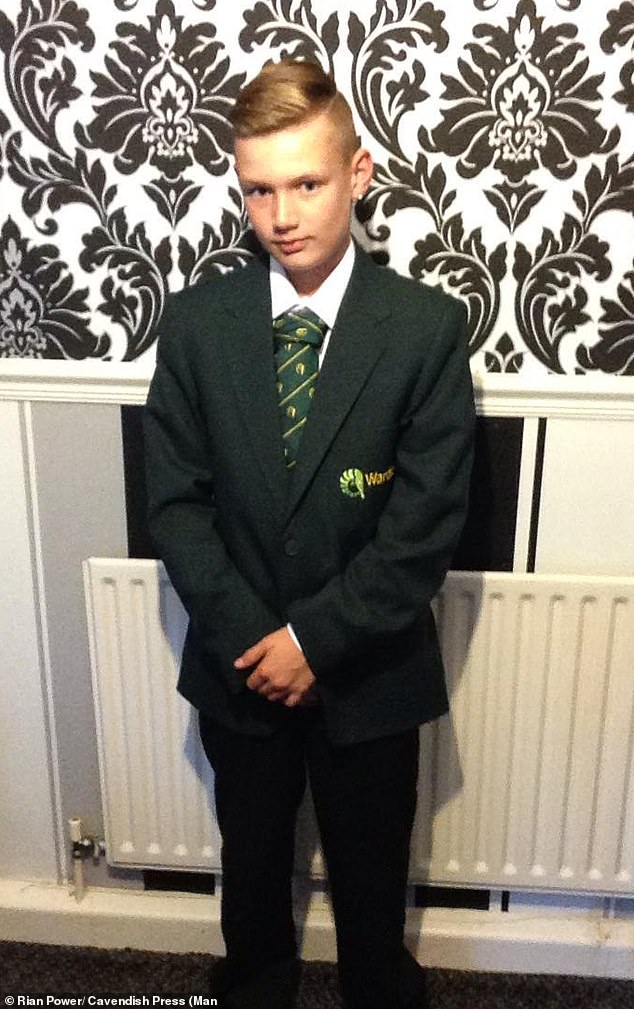 The incident on December 11 last year began after two young brothers walking to school saw Power holding a large bottle of cider and arguing with the shopkeeper who had just banned him from the premises.

Power who left Wardle Academy in 2019 walked 20 metres ahead of the brothers but suddenly turned round and confronted them in the street.

Matthew Curtis prosecuting said: ‘He told one of the boys: “Why are you bullying my cousin?”

‘The lad had barely spoken to his cousin once or twice yet was punched in the head. Power then told the other boy: “You want these also” before punching him square in the face.

‘He was pushed to the floor and was kicked. The boy curled up in a ball to protect himself and felt a number of kicks to his arms. He was wearing glasses and they were snapped. 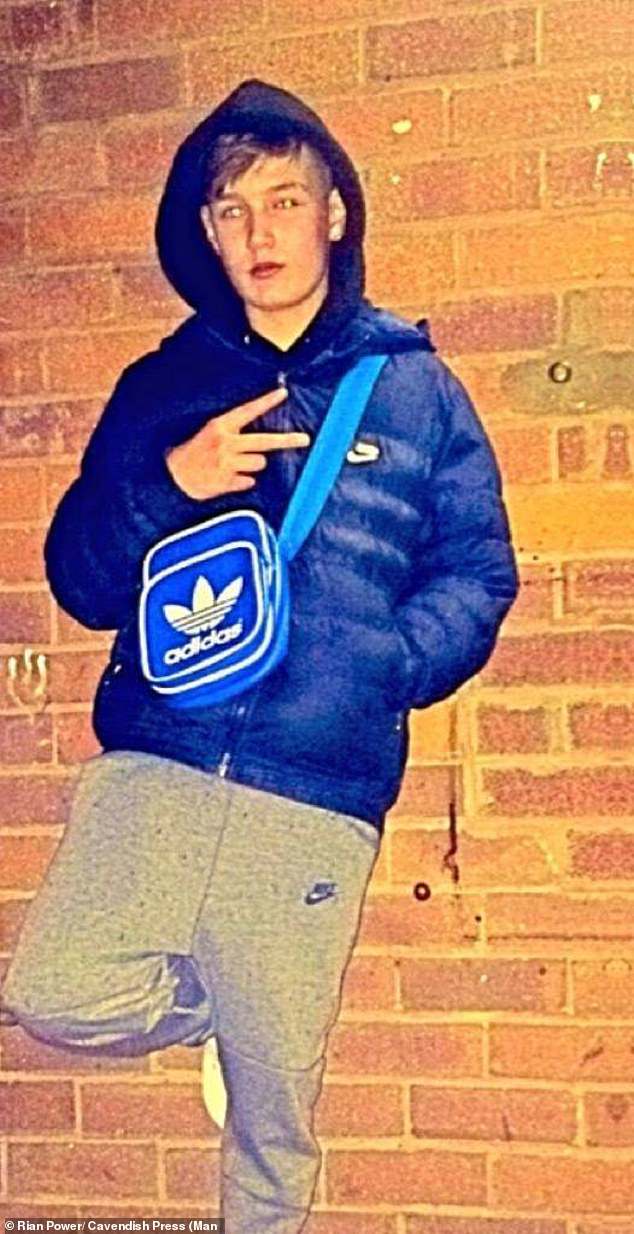 During his attack on the 8am school run, he falsely accused victims of picking on his cousin and left one boy of 14 with a broken nose and others with cuts and bruises, while one boy had his glasses snapped

‘Another pupil saw the beating and went to see if they were ok but the defendant approached him and said: “Wait there or I’ll go to your mum’s house.” The boy was just trying to get to school but Power accused him of bullying his cousin.

‘The defendant was seen to be staggering around slurring his words and he then punched the boy three times once to nose, head and ear.’

‘He then approached some girls and asked them: “What are you doing hurting my cousin”. They said they hadn’t done anything but the defendant said: “If you don’t tell the truth I will spit at you.”

‘He then looked at one of the girls spat on the floor and told her: “Go and suck your dad’s d***.” He was shouting abuse and the the girl was really scared at his aggression.

‘The defendant even more randomly assaulted other children as they walked across the school. One had his school tie flocked by the defendant who told him: “I bet you think you’re really hard before being punched in the face.”

He became aggressive with a group of three school boys and asked them if he knew his cousin. When one gave a response, the defendant said: “Wrong answer” then punched two of them to the face. 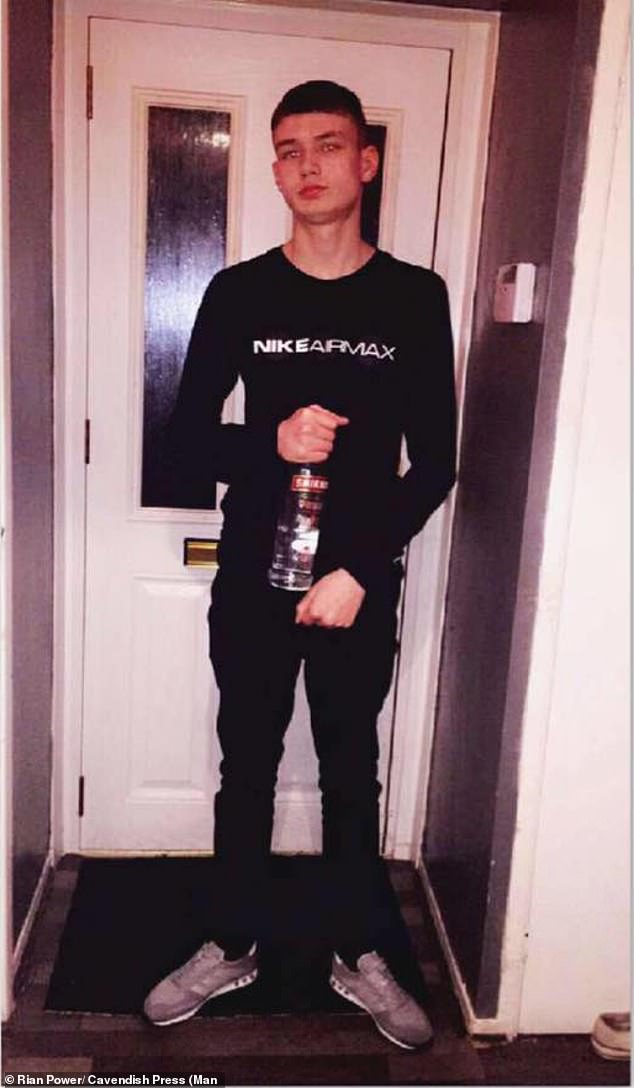 ‘One boy outside the front of the school saw Power raise his arms with a clenched fist, he thought the defendant was going to give him a fist bump but he was punched to the face and was told: “I just smacked you.”

‘Another boy was told: “What are you looking at?” and when he said: “Nothing” was slapped in the face. One suffered a broken nose and a blood clot when he was punched in the face after being asked for cigarettes. The defendant even punched a lad in the face as he walked passed him.’

Power walked away from the scene and told one pupil: “I’ll give you a fiver if you don’t tell anyone what I’ve done” but he was arrested following a short chase. He was said to have been heavily intoxicated and smelt of stale alcohol. In the police van, Power was heard to shout: “I wouldn’t hit a kid” but he gave no comment in police interview.

In statement to police one boy said: ‘I felt really shaken up and I was really worried I would see the defendant around and get attack again. Another said: ‘Nobody had the right to hurt me I didn’t deserve it, I had done nothing wrong. It made me nervous about walking to school and I had to take a different route.

A fifth had to seek counselling over the attack and said: ‘It’s really knocked my confidence as I do not feel confident about walking to school. I used to ride my bike when outside but now I don’t feel I can.

‘What little independence I had has been taken away. I to have deep injections to help heal my nose which was reset. I couldn’t do PE or sports and train for rugby.’

Power of Rochdale was banned from going within 500 metres of the school and from posting comments on social media about any of the victims under the terms of a restraining order.

He was allowed to be released immediately due to the face he had already served eight months on remand. 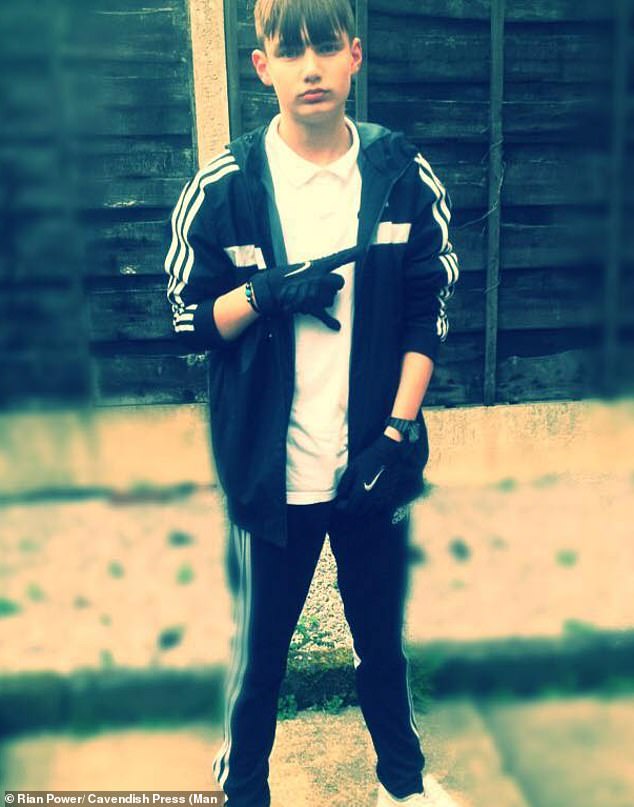 Power of Rochdale appeared at Carlisle Crown Court via video link and was sentenced to 16 months youth custody after he admitted two charges of occasioning actual bodily harm, common assault and affray

Sentencing Judge Paul Lawton told him: ‘These schoolboys were simply going about their business making their way to school that morning. You subjected then at random to physical violence and trauma and humiliation.

‘All this came about about after you had spent the previous evening drinking cider and taking cocaine and cannabis. You stayed up all night the next morning you met your cousin who informed you he was being bullied. This plainly triggered your subsequent conduct.

‘It seems what your cousin said to you triggered traumatic memories of your own abuse at the hands of bullies at school. Your autism diagnosis says you have a poor sense of self control in emotionally challenging situations and that you react irrationally to such situations.

‘But the fact you have insight into the impact of bullying and violence upon young men in their formative years forces me to conclude that whilst you were influenced to some extent by your personal difficulties and the controlled substances you had taken, you knew full well what you were doing was wrong – not least because of your own experiences.’