Suits you! El Chapo and his wife wear matching velvet burgundy jackets to court in a show of solidarity as his mistress tell how the drug lord planned to flee authorities by stealing a car while NAKED

The mistress of Sinaloa Cartel boss Joaquin ‘El Chapo’ Guzman was back on the stand at his trial at a New York court on Tuesday but she was upstaged by the drug kingpin and his wife’s choice of clothing as the couple wore matching jackets.

Lucero Guadalupe Sanchez Lopez, 39, was there to continue the testimony she started last week describing both her personal and professional relationship with El Chapo.

However, moments before she began, El Chapo appeared in court wearing a velvet burgundy blazer which was almost identical to the one being worn by his wife Emma Coronel Aispuro. 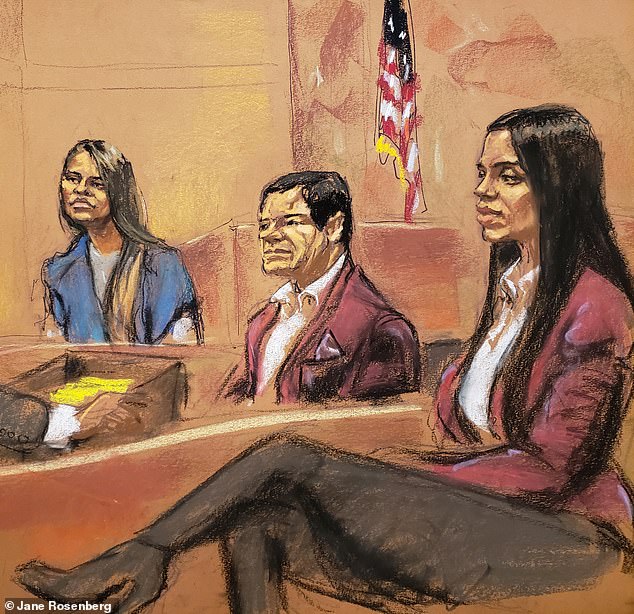 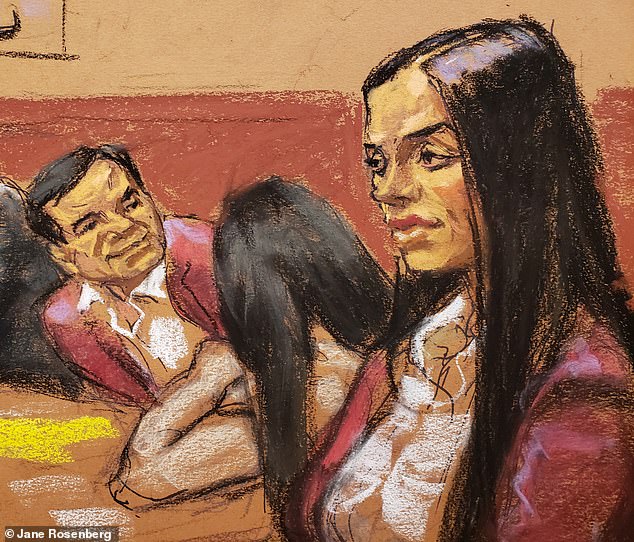 El Chapo Guzman’s wife Emma Coronel Aispuro apparently brings her husband suits to wear for each day of his court appearance. Tuesday’s outfit saw them both compliment one another

It’s believed El Chapo’s outfirst are brought to court by his wife who is not allowed to visit, or speak to her husband.

To onlookers, it appeared as though the couple were displaying a show of solidarity squarely aimed at Sanchez who went into further detail about the years she was El Chapo’s top mistress.

Sanchez told how the Mexican drug lord Guzman managed to escape authorities as he ran naked through a secret underground tunnel in 2014.

But once El Chapo had come out the other end of his escape route, he then planned to steal a car – all while in the buff.

‘He was desperate and he was telling the guy we should steal a car so we could leave,’ his mistress Lucero Guadalupe Sanchez Lopez told jurors in Brooklyn federal court on Tuesday. 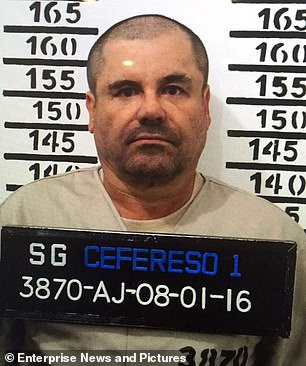 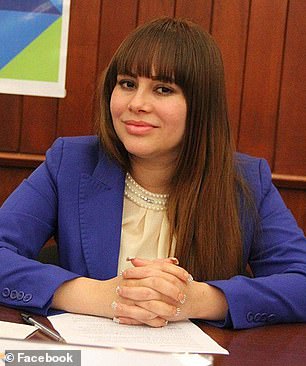 Lucero Guadalupe Sánchez López, right,  was arrested in 2017 on charges of drug trafficking and money laundering leading her to turn witness against Joaquin ‘El Chapo’ Guzman (left in his December 2016 mugshot) 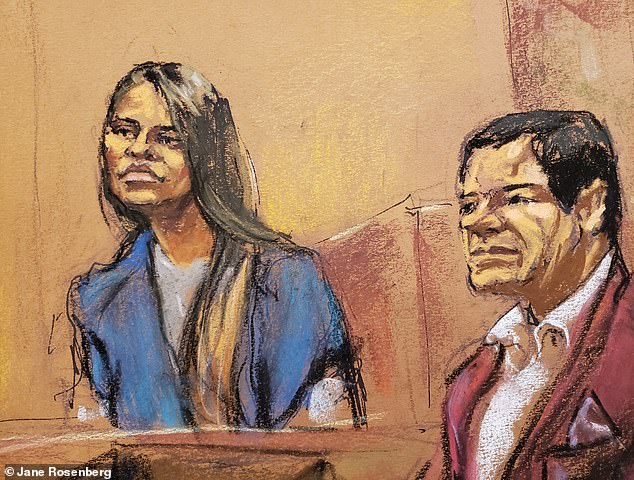 Among the most-discussed details Sanchez, left, revealed in court was her account of how she and Guzman who was totally naked once escaped capture through a tunnel 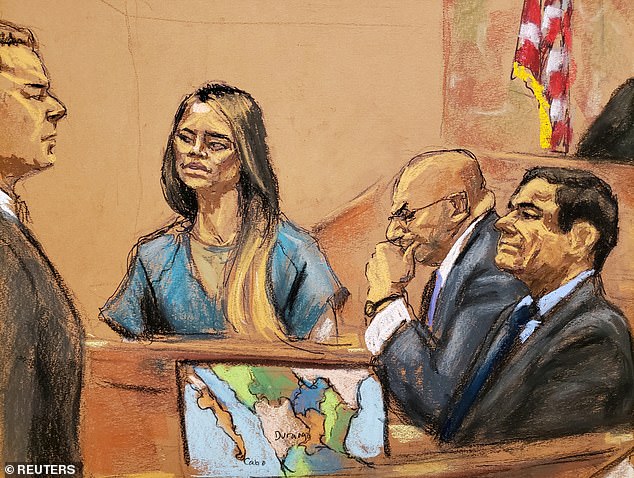 ‘He was desperate and he was telling the guy we should steal a car so we could leave,’ El Chapos’s mistress Lucero Guadalupe Sanchez Lopez told jurors in Brooklyn court on Tuesday

Sanchez described how she, a maid and a secretary named Condor along with El Chapo who was butt naked all throughout fled through a tunnel hidden under his bathtub at his home in Culiacan on the night of February 16, 2014.

it took the group an hour wading through dark and muddy tunnels before they emerged through the sewers.

Chapo was anxious to get away as quickly as he could as they felt the buzz of activity with search helicopters hovering above. 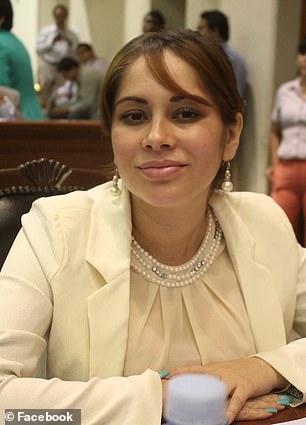 Sanchez, 29, told how the drug lord ran through his escape tunnel butt naked at he fled U.S. and Mexican authorities on Tuesday

Eventually, the trio were picked up by another associate where El Chapo was able to get dressed.

The group headed to Mazatlan where he was arrested just a few days later while at a hotel in bed with his wife.

Sanchez had been elsewhere at the time and only learned of his capture after hearing about it on the news.

Sanchez was a former state legislator who claimed her affair with Guzman ruined her political career.

She testified that she was tossed out of office in 2016 following press reports that she had visited ‘El Senor’ in prison.

Sanchez said she had publicly denied being involved with him out of fear for her life.

Also on Tuesday it was revealed how after escaping a Mexican prison in 2001, El Chapo recruited a former security chief from the same lockup as a fixer for his Sinaloa cartel.

The former official, Damaso Lopez Nunez, described how he first met El Chapo when the kingpin asked for contraband in exchange for cash bribes at the prison in the state of Jalisco, Lopez testified, adding that the drug lord also gave him a house.

Lopez quit his job before El Chapo famously escaped in 2001 by hiding in a laundry bin, he said. 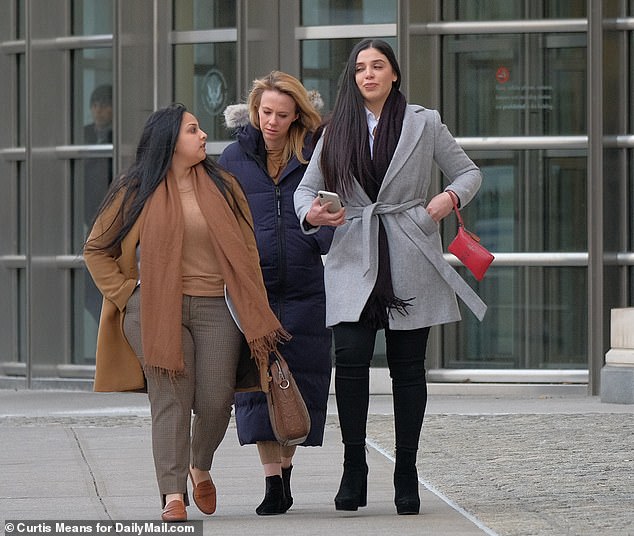 Emma Coronel Aispuro, far right, the wife of  El Chapo walks out of Brooklyn Federal court with a group of friends onTuesday 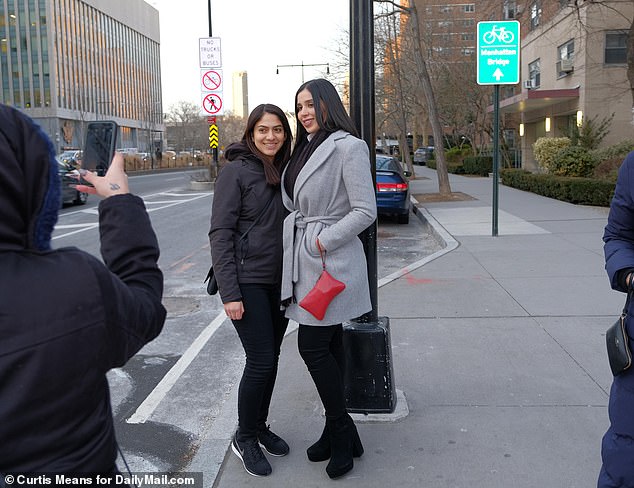 The defendant’s wife listened to the testimony while wearing a burgundy-colored, velvet blazer that matched one sported by her husband, leading to speculation that it was a show of solidarity.

The testimony from Lopez came with the government winding down a case that began in mid-November and has featured a parade of cooperators who described El Chapo’s exploits as the boss of the Sinaloa cartel.

His lawyers say he’s being made a scapegoat by unsavory cooperators trying to get breaks in their own drug cases.

Lopez described a meeting where El Chapo told him that he decided to flee prison after learning through a government source that there was an order for his extradition. ‘The plan for his escape was spontaneous,’ he said.

El Chapo was upset because some prison guards were being falsely accused of helping him breakout when it was only the work of one guard nicknamed El Chito. ‘He told me they had been unjustly detained,’ Lopez said.

Lopez, 52, went on to become a fixer for the Sinaloa cartel.

After court concluded for the day, El Chapo’s wife was seen leaving the Brooklyn Federal Courthouse where she beamed for the cameras.

At one point she even stopped to take pictures with a supposed fan who asked for a photograph from the alleged drug kingpin’s wife, Emma Coronel Aispuro.

After jurors had left for the day, one of the prosecutors, Gina Parlovecchio, told U.S. District Judge Brian Cogan the prosecution expected to wrap up its case either Thursday afternoon or Monday morning.

After that, El Chapo’s lawyers will have a chance to call their own witnesses. It is not yet known whether El Chapo will testify himself.