“It seems that some of the fanbase … has decided to attack Moses Ingram online sending the most horrendous, racist DMs,” McGregor said in a video posted to the official Star Wars Twitter account. “I heard some of them this morning and it just broke my heart.”

On Monday, Ingram shared screenshots of the messages people sent her online on Instagram, calling her a “diversity hire” among other insults and racial slurs. “Long story short, there are hundreds of those, hundreds,” Ingram said in a follow-up video posted to her Instagram story. “There’s nothing anybody can do to stop this hate.”

“The thing that bothers me is … sort of this feeling that I’ve had inside of myself, which no one has told me, but this feeling of, ‘I just have to shut up and take it,'” Ingram continued. “And I’m not built like that, so I really just wanted to come on and say thank you to the people that show up for me in the comments and the places I’m not gonna put myself. To the rest of y’all, y’all weird.”

McGregor concluded his video by saying that “as the leading actor in the series, as the executive producer on the series, that we stand with Moses.”

“We love Moses,” he said. “And if you send her bullying messages, you’re no Star Wars fan in my mind. There’s no place for racism in this world. I totally stand with Moses.”

“We are proud to welcome Moses Ingram to the Star Wars family and excited for Reva’s story to unfold,” the account tweeted with a photo of Ingram’s character. “If anyone intends to make her feel in any way unwelcome, we have only one thing to say: we resist.”

We are proud to welcome Moses Ingram to the Star Wars family and excited for Reva’s story to unfold. If anyone intends to make her feel in any way unwelcome, we have only one thing to say: we resist. pic.twitter.com/lZW0yvseBk

“There are more than 20 million sentient species in the Star Wars galaxy, don’t choose to be a racist,” another tweet from the account read.

Fellow “Obi-Wan” co-star Kumail Nanjiani expressed his support for Ingram on Twitter calling her a “phenomenal person and actor.”

“I am excited about the decades of amazing work she has ahead of her,” he wrote.

“Star Trek” actor Anson Mount defended Ingram on Instagram, writing: “She is a singular talent and a recent addition to the @starwars universe. She has also been targeted by racists pretending to be fans because her mere existence threatens a skewed, dystopian fantasy … We, the Trek Family, have her back. ❤️🖖❤️🖖❤️.”

Review: ‘Star Wars: Brotherhood’ is the Anakin Skywalker, Obi-Wan Kenobi story fans have been waiting for

This isn’t the first time fans of the “Star Wars” franchise have harassed actors online.

Kelly Marie Tran, who played Rose Tico in the movies “The Last Jedi” and “The Rise of Skywalker,” was the first woman of color to land a major “Star Wars” role. In a 2018 New York Times op-ed, Tran opened up about the online harassment which caused her to delete her social media accounts.

“Their words seemed to confirm what growing up as a woman and a person of color already taught me: that I belonged in margins and spaces, valid only as a minor character in their lives and stories,” she wrote.

More: Kelly Marie Tran opens up about deleting her Instagram after online harassment

John Boyega, who played Finn in the recent “Star Wars” trilogy, has previously spoken about the death threats he received after appearing in “Star Wars: The Force Awakens.”

In a 2020 interview with British GQ, Boyega said he was “the only cast member who had their own unique experience of that franchise based on their race.”

“It makes you angry with a process like that. It makes you much more militant; it changes you. …Nobody else in the cast had people saying they were going to boycott the movie because (they were in it),” he continued. “Nobody else had the uproar and death threats sent to their Instagram DMs and social media, saying, ‘Black this and black that and you shouldn’t be a Stormtrooper.’ Nobody else had that experience. But yet people are surprised that I’m this way. That’s my frustration.” 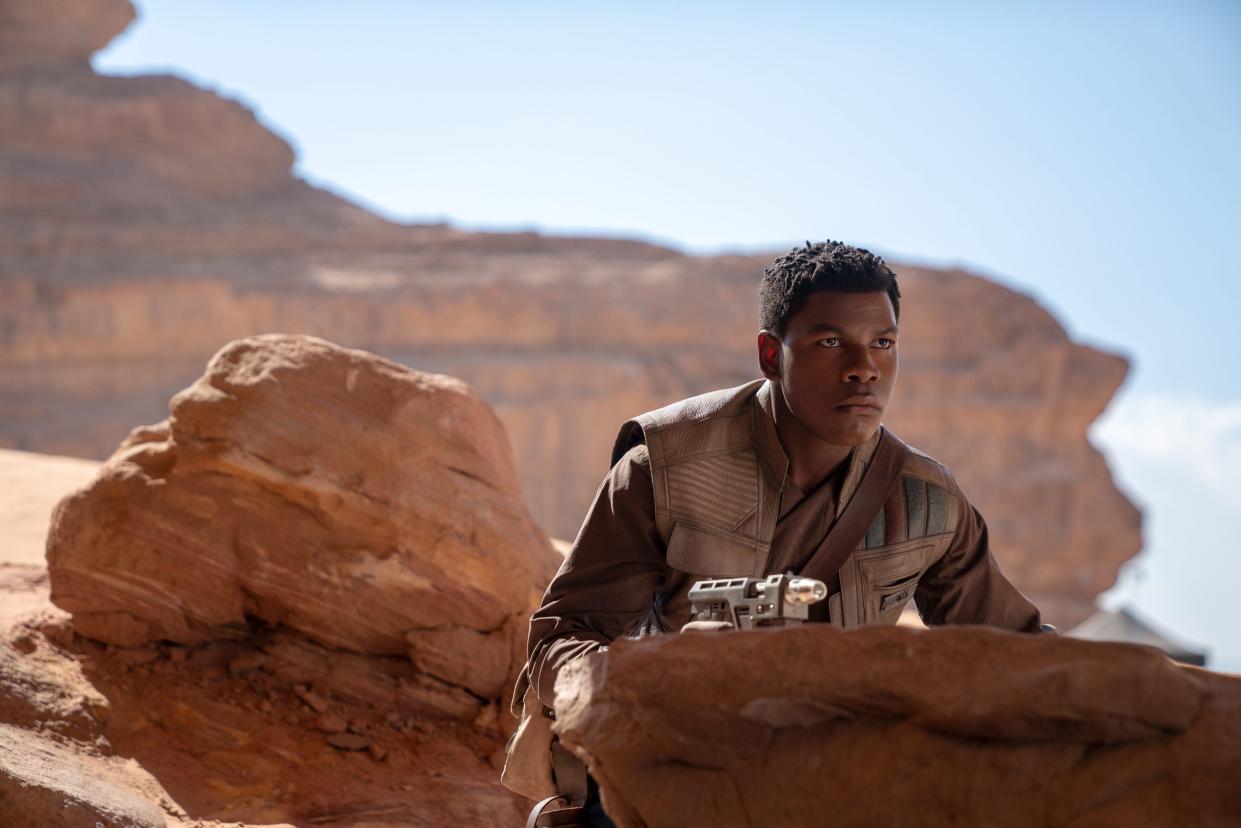 Boyega has also been critical of Disney and how his character was handled.

“What I would say to Disney is do not bring out a Black character, market them to be much more important in the franchise than they are and then have them pushed to the side,” he said. “It’s not good. I’ll say it straight up.”

More: Kelly Marie Tran opens up about deleting her Instagram after online harassment