London: Two European patients are confirmed to have been reinfected with the coronavirus, raising questions over how long immunity to the virus lasts.

The cases, in Belgium and the Netherlands, come a day after researchers in Hong Kong revealed that a 33-year-old man was reinfected with a different strain of the virus 4½ months after being declared recovered – the first such reinfection to be determined through genetic sequencing.

However, experts have advised caution in interpreting the small number of cases in a pandemic that has infected more than 23 million people. 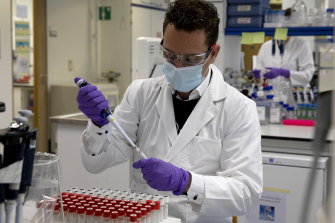 A lab technician fills a test tube during research on COVID-19 at Johnson & Johnson subsidiary Janssen Pharmaceutical in Beerse, Belgium.Credit:AP

Virologist Marc Van Ranst said the Belgian case was a woman who had contracted COVID-19 for the first time in March and then again in June.

Further cases of reinfection were likely to surface, he said.

"We don't know if there will be a large number. I think probably not, but we will have to see," he said.

Dr Margaret Harris, a spokeswoman for the World Health Organisation told the BBC that extensive testing in Hong Kong showed reinfection was still likely to be fairly uncommon.

"We would expect that given the quality of the surveillance — and the study in Hong Kong shows what a high level of surveillance they are doing there — you would have expected to see many more cases if this was happening a lot," she said.

The National Institute for Public Health in the Netherlands said it had also observed a Dutch case of reinfection. Virologist Marion Koopmans was quoted by Dutch broadcaster NOS as saying the patient was an older person with a weakened immune system.

She said cases where people have been sick with the virus a long time and it then flares up again were better known.

Previous cases of reinfection have been put down to the virus lingering in the body for a long time or false-negative tests.

But a true reinfection, as in the Dutch, Belgian and Hong Kong cases, required genetic testing of the virus in both the first and second infection to see whether the two instances of the virus differed slightly as viruses mutate in small ways over time.

The new cases have fuelled fears about the effectiveness of potential vaccines against the virus, as it would appear that immunity only lasts a short period of time.

The team behind the Oxford University vaccine — touted as the front-runner — have already said that any jab may have to be given annually, like the flu immunisation.

"Perhaps a vaccine will need to be repeated every year, or within two or three years. It seems clear though that we won't have something that works for, say, 10 years," he said.

He added that in cases such as the Belgian woman's in which symptoms were relatively mild, the body may not have created enough antibodies to prevent a reinfection, although they might have helped limit the sickness.

In the Hong Kong case, the reinfected person did not have any symptoms the second time and the infection was picked up through airport screening. Researchers said this may indicate that previous exposure to the virus may mean that subsequent infections are milder.