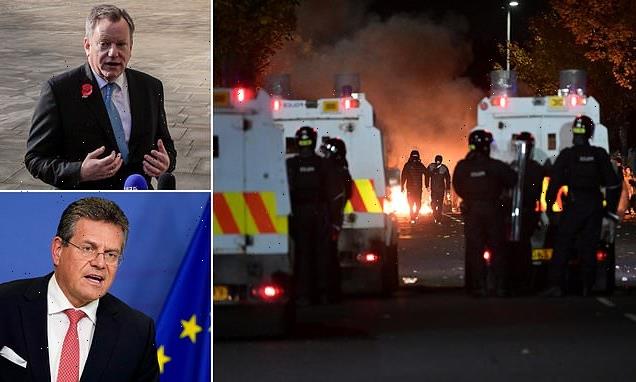 The EU warned of ‘serious consequences’ if the UK suspends the Northern Ireland protocol today after fresh talks failed to secure a breakthrough.

Lord Frost has met Maros Sefcovic in Brussels as they try to find a way through the increasingly bitter impasse over post-Brexit rules.

But the commission vice-president said afterwards that he was ‘disappointed’ there has been no ‘big move’ from the UK. He said the round of discussions in London next week will be crucial.

And he fired a shot across Britain’s bows after Lord Frost repeated that invoking Article 16 – which would essentially remove the divorce rules for Northern Ireland – is ‘on the table’.

At a press conference, Mr Sefcovic said: ‘Until today we have seen no move at all from the UK side. I find this disappointing and once again I urge the UK government to engage with us sincerely.’

‘We hear a lot about Article 16 at the moment. Let there be no doubt that triggering Article 16 to seek the renegotiation of the protocol would have serious consequences.’

The EU says it has already ‘bent over backwards’ to make concessions on the implementation of the protocol.

However, key disagreements remain, including over the role of the European Court of Justice in any disputes. The new arrangements have been blamed for fuelling sectarian tensions in Northern Ireland as loyalists demand it is scrapped altogether. 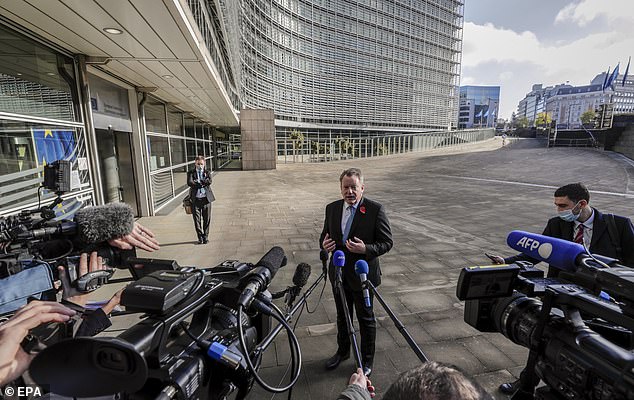 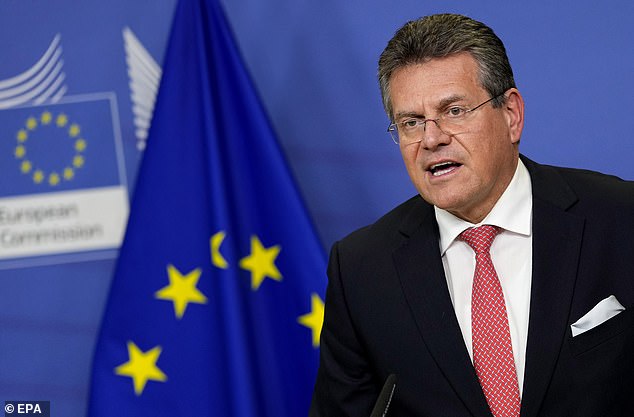 A UK government readout of the meet said Lord Frost had ‘underlined that progress had been limited and that the EU’s proposals did not currently deal effectively with the fundamental difficulties in the way the protocol was operating’.

‘He added that, in the UK view, these gaps could still be bridged through further intensive discussions,’ the statement said.

‘He underlined that the UK’s preference was still to find a consensual solution that protected the Belfast (Good Friday) agreement and the everyday lives of people in Northern Ireland.

The pair also had a ‘short’ discussion about fisheries policy, with the row with France another potential destabilising factor in relations.

To avoid a hard border with Ireland, the protocol effectively keeps Northern Ireland inside the EU’s single market for goods.

That has resulted in some checks for products crossing the Irish Sea from the British mainland, which left the single market.

Earlier, Lord Frost said he would not immediately trigger Article 16, which would allow parts of the deal to be suspended. 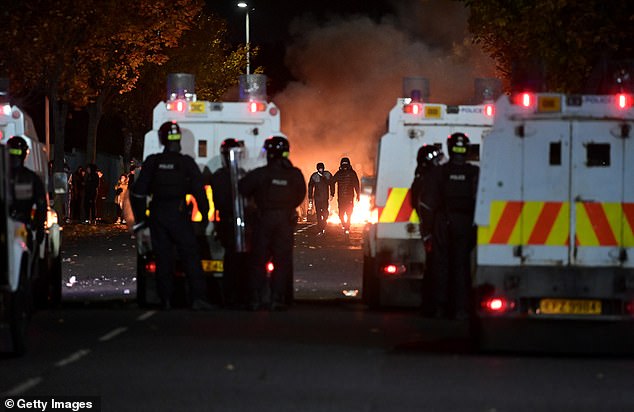 The new arrangements have been blamed for fuelling sectarian tensions in Northern Ireland as loyalists demand it is scrapped altogether. Pictured, protests in Belfast on Tuesday

He said: ‘We’re not going to trigger Article 16 today, but Article 16 is very much on the table and has been since July.

‘If we can reach an agreement on the protocol that provides a sustainable solution, then that’s the best way forward.’

He has previously claimed the conditions for using the mechanism have been met because of the difficulties being caused.

The Brexit minister has previously said he expects the issues around the protocol to be settled ‘one way or another’ this autumn.

The UK also wants an end to the European Court of Justice’s oversight role, something that Brussels has said is impossible.