Daily coronavirus cases in the UK surge by 53% in a WEEK to almost 2,000 per day, symptom-tracking app estimates

Daily coronavirus cases have surged by 53 per cent in one week to almost 2,000 per day, according to estimated from a symptom-tracking app.

King’s College London used data from more than four million people who regularly report if they have any symptoms of Covid-19.

Their estimates show cases have soared from the record low 1,300 reported last week, and are now at the highest since July 25.

Six new coronavirus hotspots across the UK have been flagged by the team, three of which have been added for the first time.

On the top of the ‘watch list’ is East Renfrewshire, Scotland, while West Lothian is number 10, following the Scottish Government’s decision to bring restrictions into regions in West Scotland.

Ards and North Down in Northern Ireland was also new to the watchlist, while Neath Port Talbot in Wales, Nottingham and Tameside in England were put back on the list after previously dropping off.

But not a single area in the south or east of England, including London, show concerning levels of infections, a sign Covid-19 continues to split the UK.

It comes after the Department of Health reported the biggest spike in daily diagnosed Covid-19 cases, 1,735 new yesterday. 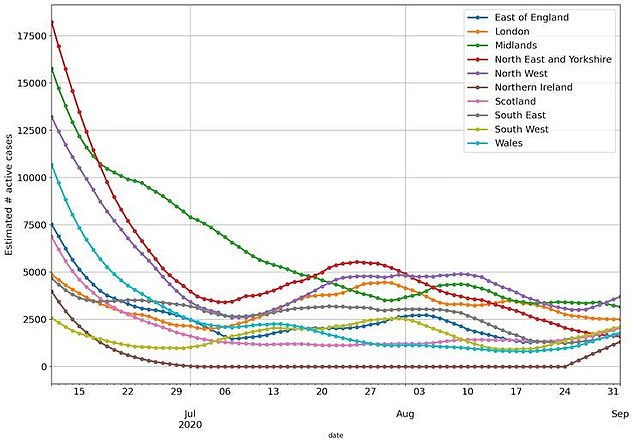 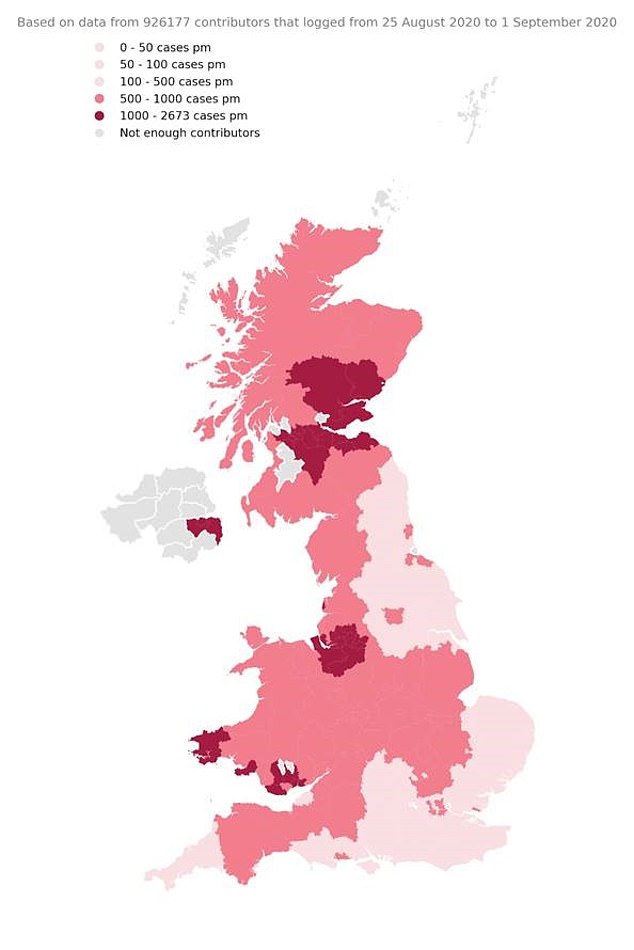 Infection rates across the UK, as predicted by the COVID Symptom Study app

Today’s weekly report from King’s College maintains there are outbreaks across the UK that are causing cases to steadily rise.

Developed by healthcare science company, ZOE, the COVID Symptom Study app has now been downloaded by over 3.9million people in the UK who regularly report if they have symptoms of the coronavirus or have been tested.

Researchers say there are currently 1,974 daily new cases of Covid-19 in the UK, based on data from 9,489 swab tests done between 9 August to 22 August.

The incidence number has crept up from last week which was 1,292 where the numbers had been holding steady since early July.

Only three weeks ago the researchers had said it was ‘encouraging’ to see the cases coming down across the UK to levels seen in July.

It’s estimated 22,040 people currently have symptomatic Covid-19 in the UK excluding care homes, up on the 18,340 the week prior.

The app’s prevalence estimate is within the range given by the Office for National Statistics, which is conducting weekly swabs of random households for a government-run surveillance study.

The ONS Infection survey said last week an estimated 28,200 people in England alone have the coronavirus right now, which could be as low as 20,100 or as high as 37,900.

The ONS said there is ‘some evidence of a small increase in the percentage of people testing positive for Covid-19 in July, following a low point in June, but this continues to level off’.

One reason that the COVID Symptom Study app estimate is consistently lower than the ONS is the data doesn’t include asymptomatic cases.

ONS do swabs of hundreds of thousands of people in random households, therefore detect those who do not show symptoms. But the COVID Symptoms Study app relies on people reporting their own symptoms.

Several new areas were flagged on King’s watch list this week that were not on there the week prior. The aim of the list is to highlight areas of concern so that attention can be focused there, such as increased testing.

East Renfrewshire and West Lothian in Scotland have entered the top 10 areas of concern for the first time since the app launched, where 0.22 per cent and 0.14 per cent are carrying the coronavirus, respectively.

On Tuesday First Minister Nicola Sturgeon announced a ban on indoor household gatherings were imposed on East Renfrewshire as well as Glasgow and West Dunbartonshire.

At least seven schools in England have sent pupils home to self-isolate due to students catching coronavirus within days of the start of term.

Primary and secondary schools in Greater Manchester, Yorkshire, Leicestershire, Lancashire and Buckinghamshire have all been stricken by the virus – seven sending pupils home and another delaying the start of term.

Notable among them is Sir William Borlase’s Grammar School in Marlow, Bucks, which delayed yesterday’s start of term after 20 pupils tested positive for Covid-19 after returning from a party holiday to the Greek island of Zante.

Today it emerged that another seven schools – which unlike Sir William Borlase’s had already started term – have asked pupils to go home, some after just hours back in the classroom.

The seven schools are:

Cases have increased in the area which Ms Sturgeon said was mainly due to mixing in households. Schools, pubs and restaurants have been allowed to remain open.

The First Minister revealed yesterday the reproduction rate of coronavirus in Scotland is now ‘probably above one’ and could be as high as 1.4.

Scotland reported 101 new cases of Covid-19 yesterday, the fifth day in a row that cases have been in triple figures. Cases have begun trending upwards this month after being at record lows during June and July.

Provisional figures indicate some 53 of these new cases are in Greater Glasgow and Clyde area.

Tim Spector, professor of genetic epidemiology at King’s College London, who leads the research using the Covid-19 app, commented: ‘While with increased economic activity and travel we are seeing the numbers starting to creep up again, it is good to see that when numbers start to rise, areas like around Glasgow are taking swift action to help stop the situation spreading.’

Ards and North Down in Northern Ireland and Neath Port Talbot in Wales have also been added to King’s watchlist for the first time, having not previously been identified as places with high levels of transmission.

Around 0.17 per cent and 0.16 per cent of the population currently have the coronavirus in those communities, which in real terms is a small number of people.

Coming in at number two on the watchlist is Manchester, where 0.19 per cent of people have the coronavirus.

The ten boroughs of Greater Manchester have been under tougher Covid-19 restrictions since the end of July. But these are starting to be lifted in some areas, as well as in Lancashire and West Yorkshire, where coronavirus cases have decreased.

Manchester, along with Blackpool, Halton and Oldham, have remained on the list for the second week running. Some areas in the north of England are on the list every week.

Professor Spector said: ‘We are yet to see these localised outbreaks such as those in the North of England, having a negative impact on hospitals and NHS capacity, which suggests that those who are getting COVID may be milder cases with less of them ending up in hospital as a result, which is good news.’

The report last week showed that Pendle, Oldham and Blackburn with Darwen, were at the top of PHE league tables as ‘areas of intervention’. Manchester is also in this category.

The weekly report being published by PHE today is expected to see a change in the watchlist, with Leeds, in West Yorkshire, thought to be an addition.

Council city leader Judith Blake has pleaded for a city-wide effort to control the coronavirus as the infection rate continues to soar.

Modelling by Imperial College London also predicts Leeds will become one of England’s hotspots in the next two weeks. 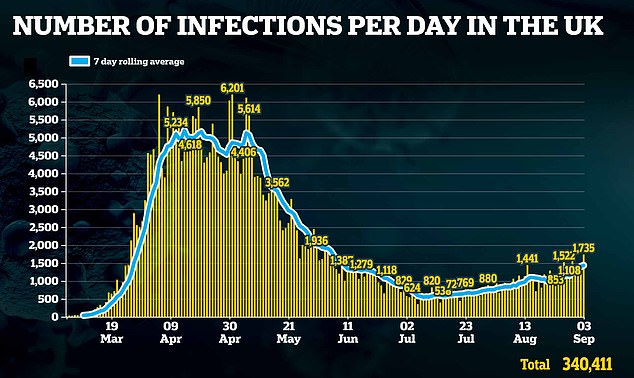 The last time daily infections were higher was on June 4, when 1,805 were diagnosed with the disease and the majority of tough lockdown restrictions were still in force.

Despite cases being on the climb since July, scientists have emphasised that it is not the sign of a second wave and that they had always expected case diagnoses to increase as lockdown measures were lifted and the testing system got better.

Experts tell MailOnline the rising figures are simply the result of young, healthy people being picked up on official figures. Previously, they were being missed because tests were reserved for the sickest people.

Deaths are continuing to spiral and hospital admissions remain flat, with less than 800 Covid-19 patients in beds, and 82 on ventilators.

For this reason, scientists say the rise in cases is not something to currently be concerned about in terms of a ‘second wave’, and is simply as a result of increased testing in the community.

The coronavirus has never been ‘eliminated’, which some scientists say means the ‘first wave’ is not actually over. New diagnosed cases were at their lowest on July 6, when 352 cases were recorded.