Esther McVey today said that she would consider running for the Tory Party leadership if Theresa May is ousted over the Brexit chaos.

Leading Conservatives are jostling to line themselves up for the top job, with Sajid Javid, Boris Johnson among those eyeing up the leadership.

And throwing her name into the mix, Ms McVey said she would think about taking a run at the job if she was urged to by allies.

Ms McVey, who left the government on the brink of collapse when she quit the Cabinet last month in fury at the Brexit plan, also said she could only support the PM if she tears up her deal and renegotiates.

Quizzed about the leadership on Sophy Ridge on Sunday on Sky News, Ms McVey said: ‘If people asked me then of course you’d give it serious consideration, and do it, if people asked me.’ 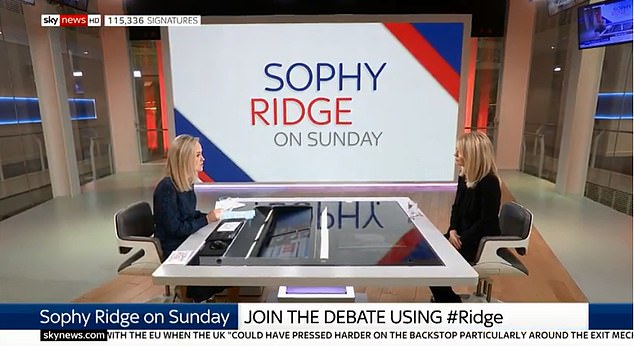 She said the next leader of the Tories should be able to ‘unite the party behind a deal’.

And she urged the PM to tear up her deal, go back to the EU and make fundamental changes to her deal.

She said the controversial backstop should be scrapped while the UK should not pay the £39billion Brexit divorce bill until the country get a free trade deal.

Theresa May is considering postponing the crunch Brexit vote and making a last-ditch dash back to Brussels for more concessions.

She has been urged to emulate Margaret Thatcher and have a ‘handbag moment’ with the EU.

The PM is facing an overwhelming defeat on the deal after over 100 Tory MPs vowed to oppose it.

Ministers have pleaded with the PM to reschedule the vote warning her it is pointless to hurtle head on into what looks set to be a humiliating defeat.

One senior cabinet minister told The Sunday Times: ‘People in No 10 think she needs to have a ‘handbag moment’ where she says: ‘Up with this I will not put.’

Mrs May is expected to make a final decision tomorrow on whether she will push back Tuesday’s vote.

‘If the Prime Minister goes back to the EU and gets changes…then I am fully behind her.’

Ms McVey lashed reports that she had a ‘meltdown’ in last month’s crunch Cabinet meeting which signed off on the Brexit deal. She quit the next morning.

She blamed the reports on hostile briefings, and insisted that she did not cry during the tense five-hour meeting.

And she revealed that Mrs May has rebuffed her pleas to return to Brussels and squeeze fresh concessions out of the EU on the backstop and the divorce bill.

She said: ‘If she goes back and gets changes on those two points then she will remain as Prime Minister.

‘If she doesn’t then it is going to be very difficult for her.’

Her outspoken intervention comes amid reports that Mrs May is considering postponing next Tuesday’s crunch vote on the Brexit deal and heading back to Brussels for fresh talks.

The PM is staring down the barrel of a massive and humiliating defeat which could send her deal and premiership crashing down.

She is being urged to emulate Margaret Thatcher and have ‘a handbag moment’ and make changes to the controversial Irish backstop plan.

Ministers have pleaded with the PM to reschedule the vote warning her it is pointless to hurtle head on into what looks set to be a humiliating defeat.

Mrs May is expected to make a final decision tomorrow on whether she will push back Tuesday’s vote.

And she made a last-ditch attempt to win over her critics on the Tory benches after over 100 vowed they will not back her plan.

She warned her warring party to back her Brexit deal or risk handing the keys to No10 to Jeremy Corbyn and leaving the UK in the EU permanently.

The Prime Minister mounted a last-ditch bid to win over her mutinous backbenchers after over 100 Tory MPs threatened to rebel in the crunch vote on her deal.

But facing an overwhelming defeat on the deal, she is considering delaying the crunch vote so she can return to Brussels to squeeze more concessions out of the EU.

She said: ‘It would mean grave uncertainty for the nation with a very real risk of no Brexit.

‘We have a leader of the Opposition who thinks of nothing but attempting to bring about a General Election, no matter what the cost to the country… I believe Jeremy Corbyn getting his hands on power is a risk we cannot afford to take.’