The number of fish that have died after a detergent spill in a creek system in Melbourne’s west has climbed into the thousands, as the local council calls for the business involved to face tough penalties.

The state’s Environment Protection Authority has revealed up to about 13,000 litres of detergent washed into Cherry Lake and Cherry Creek in Altona after a fire broke out at a nearby business on March 6. 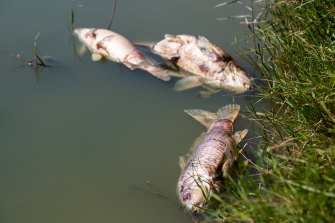 Thousands of fish have now perished in Cherry Lake and Cherry Creek at Altona. Credit:Jason South

The authority expects it could take several weeks to resolve the issue, with people warned not to make contact with water in the creek and lake from south of Kororoit Creek Road to Port Phillip Bay.

The regulator has refused to name the business involved, but said it is still investigating the exact circumstances of the spill and whether the company broke any laws. Hobsons Bay City Council, in a statement on Thursday, called for tough penalties to be imposed on the business responsible for the mass fish kill.

The council described the incident as “severe and significant”, with mayor Peter Hemphill saying it was awful and unlike anything Hobsons Bay has seen in recent times.

“When all of the details of this incident are known, and if laws have been breached, we hope that any conviction or punishment matches the severity of what has occurred within our environment,” Cr Hemphill said.

“The message needs to be very loud and very clear.”

Cr Hemphill said the council shared the community’s concern about the incident, acknowledging that along with its enormous effect on fish stock, “the area is also popular for birdlife and the effects on the wider biodiversity is still unknown, but obviously something we are deeply worried about”.

“Over the long weekend, the warm weather drew many people to the reserve and the environmental disaster was obvious to everyone,” he said.

The Environment Protection Authority said it was confident the source of the spill has been identified and contained.

Environment Protection Authority state agency commander Steve Lansdell said: “This has been terrible for the Cherry Lake and Creek environment with extensive fish deaths expected to have reached the thousands.”

Signs have been erected around the creek and the lake telling people not to consume any fish taken or make contact with the water, warning it could cause skin irritations.

The authority advised anyone who did make contact with the water to wash the affected area with clean water as soon as possible.

“We also want to make sure people or their pets don’t pick up or consume any fish taken from the area, as they will be decomposing. EPA believes it is better to err on the side of caution – if your pet has eaten some fish and you have any concerns, please speak to your vet,” Mr Lansdell said.

“Cherry Lake is a popular area with the local community and all efforts to restore it to normal are being pursued.”

Melbourne Water and Hobsons Bay City Council staff are working with officers from the Environment Protection Authority to remove the dead fish.

The regulator is yet to be notified of any sick pets or animals because of the spill.