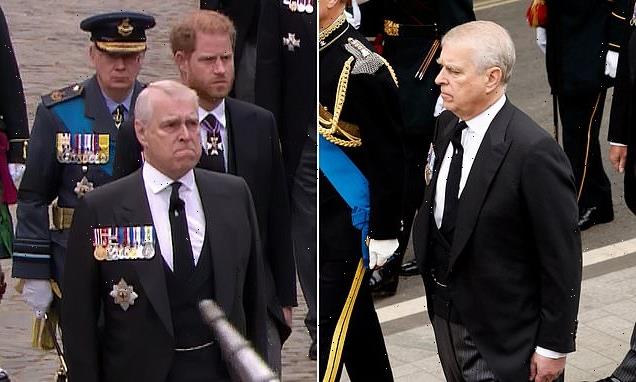 A visibly emotional Prince Andrew today wore his morning suit as he followed the Queen’s coffin through the streets of London for her state funeral.

The mourning royal was banned from wearing his military uniform at the ceremony after being stripped of his titles.

The Queen’s coffin left Westminster Hall – where she has been lying-in-state – at 10.44am and arrived at Westminster Abbey at 10.52am.

The Duke of York, who on Wednesday marched behind Her Majesty’s coffin in the Royal procession – was in the same position behind his mother’s coffin today.

His siblings King Charles, Prince Edward and Princess Anne, are all in their military uniforms.

And as the trio raised a crisp salute to their late mother outside Westminster Abbey, a grieving Prince Andrew – positioned between the Princess Royal and Earl of Wessex – slowly bowed his head in tribute. 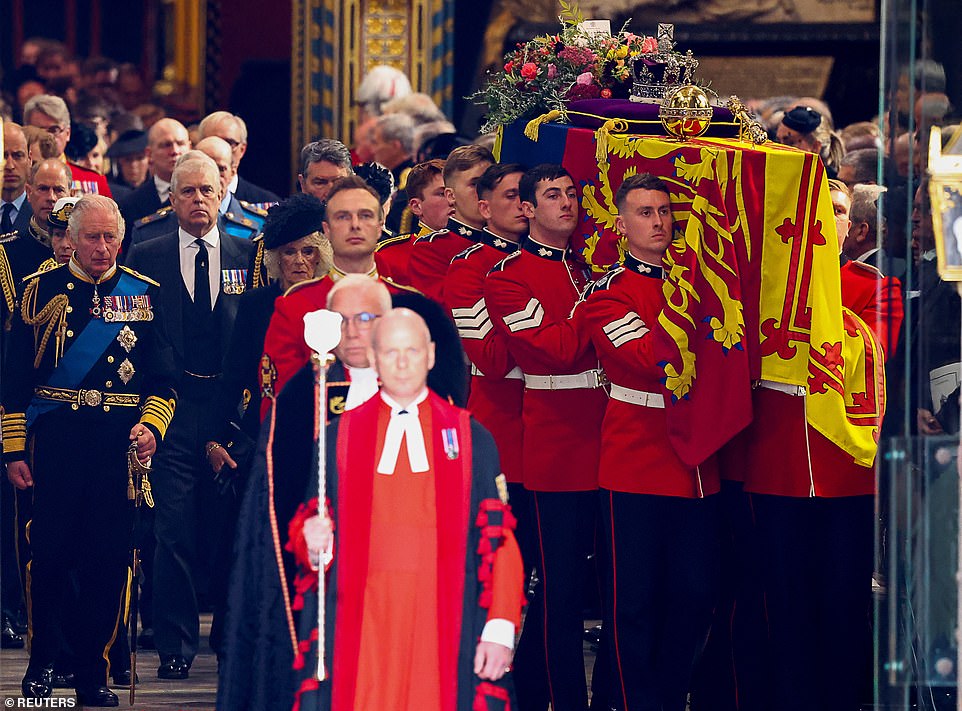 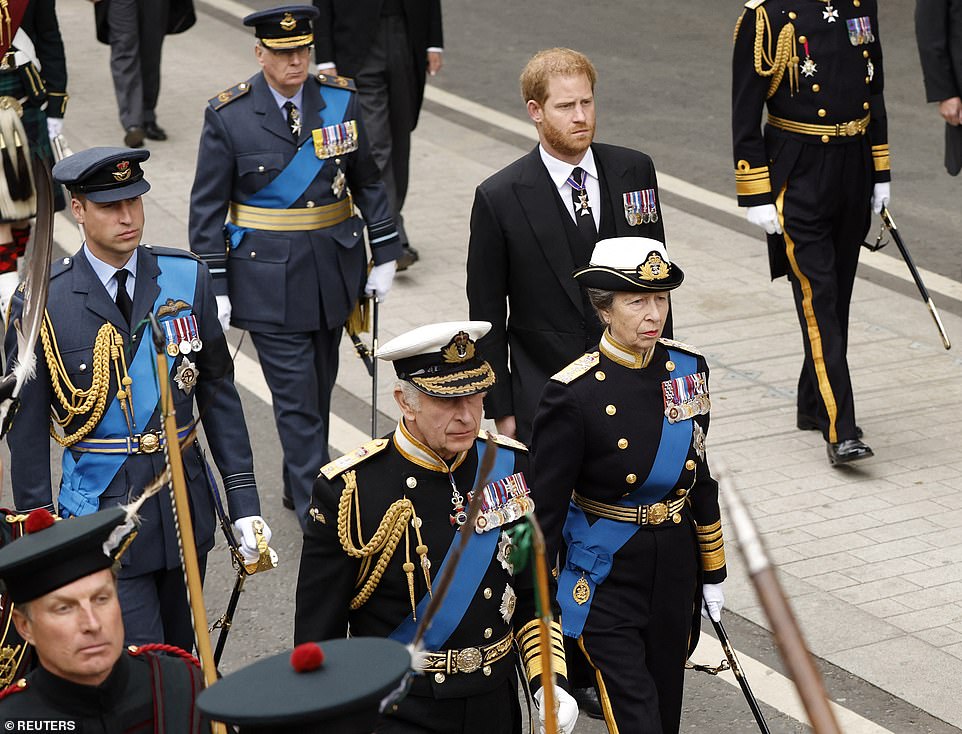 Grieving Prince Harry walks with his hands by his side next to his brother, Prince William, as the Royal Family follows the Queen’s coffin through London 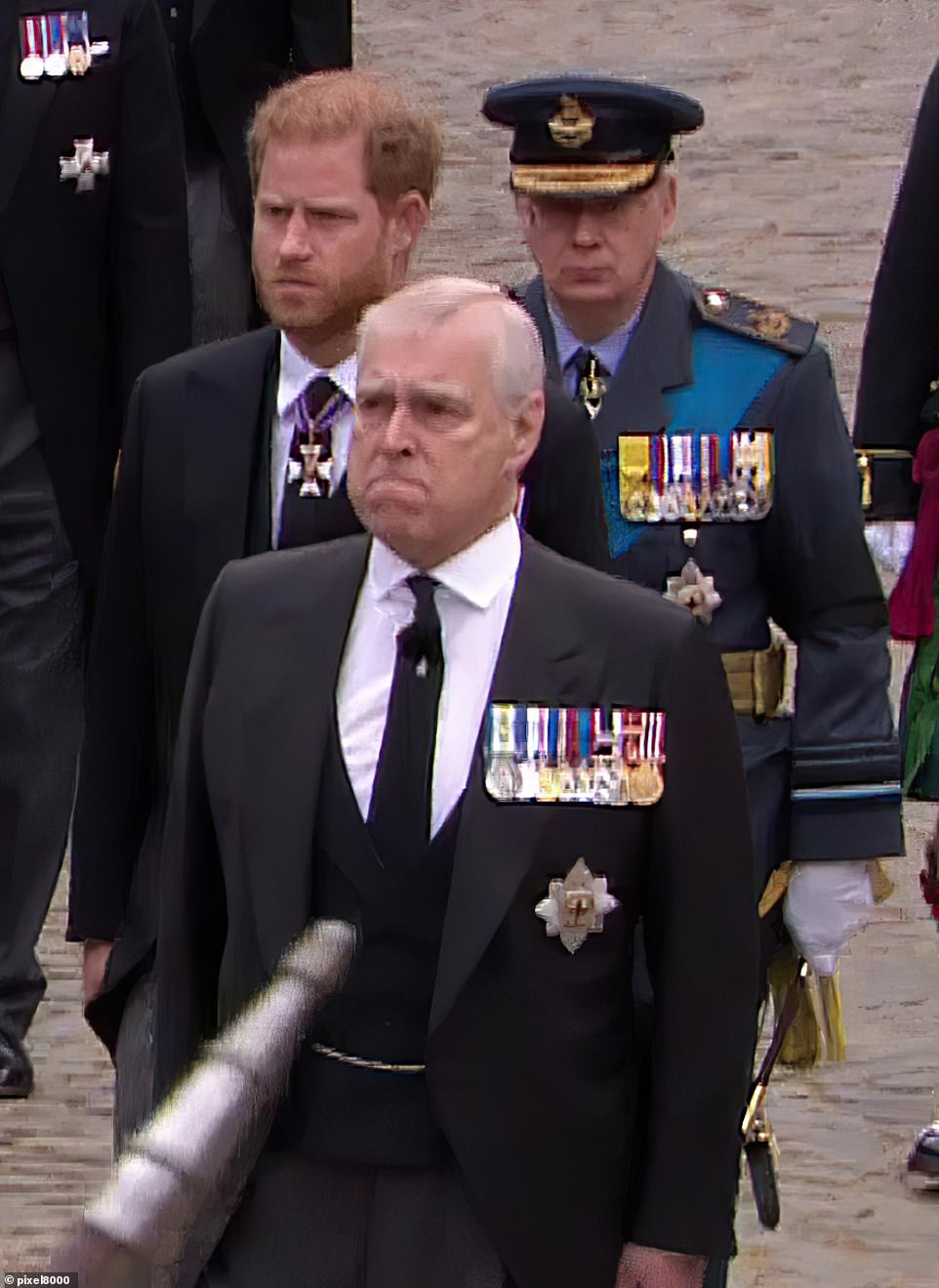 Prince Andrew looked solemn as he marched behind his mother today in his black morning suit. The 62-year-old royal was banned from wearing his military uniform to the Queen’s send-off 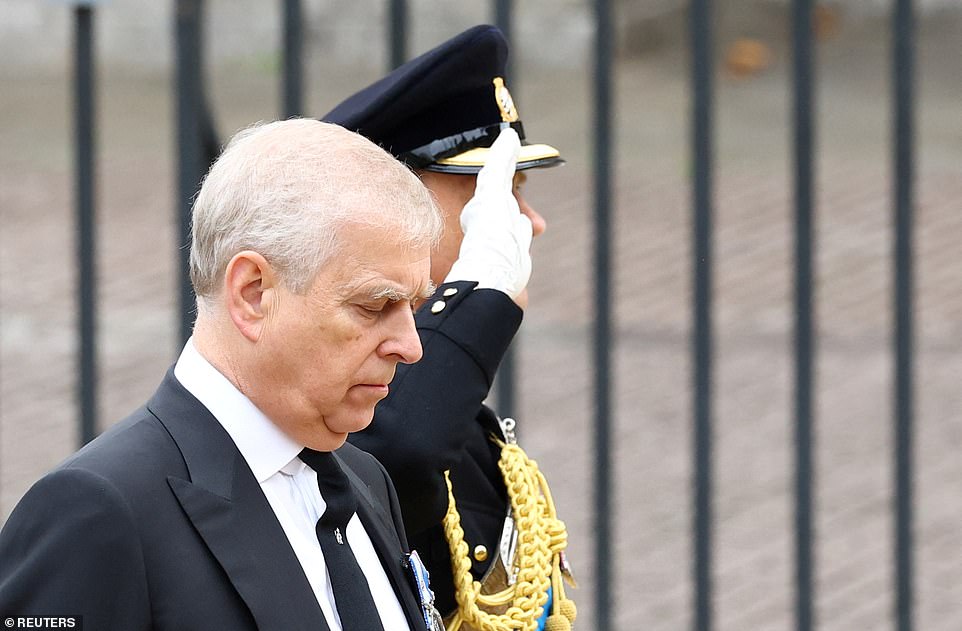 As other members of the royal family, in military attire, saluted the Queen outside Westminster Abbey, Prince Andrew bowed his head in tribute to his beloved mother 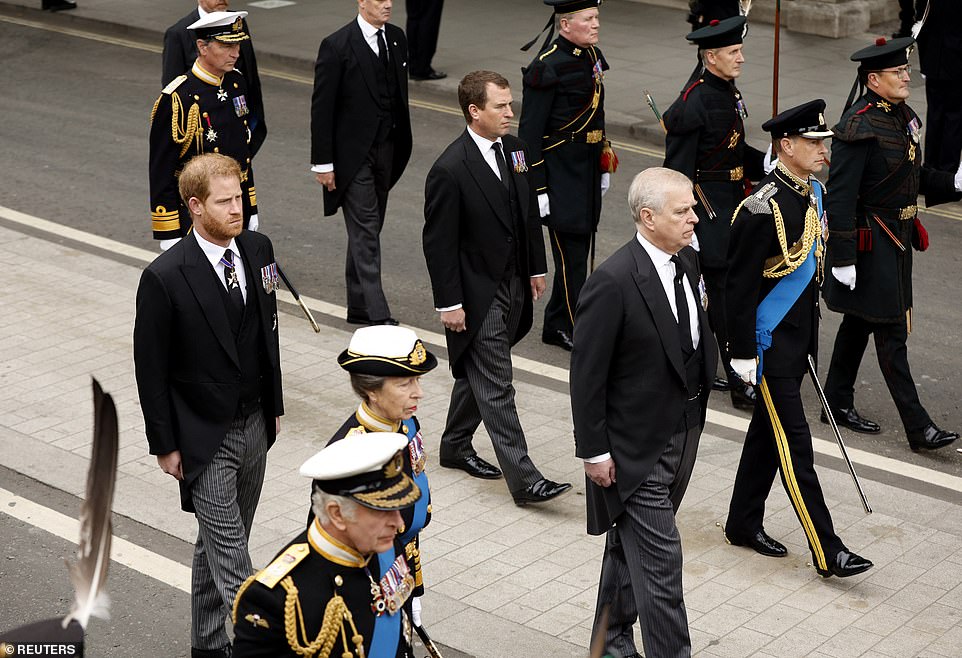 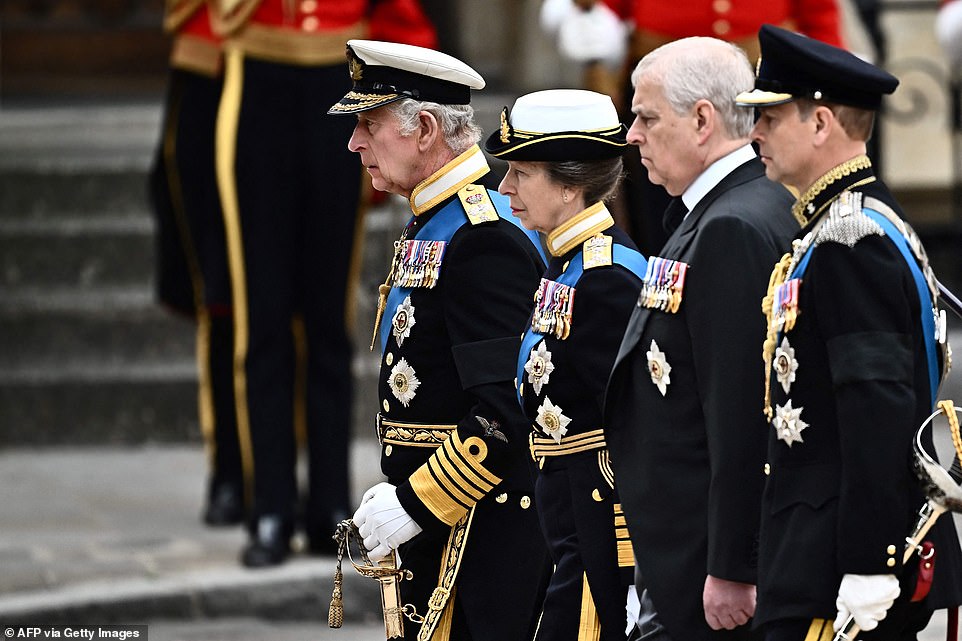 King Charles was joined by his siblings, Princess Anne, Prince Andrew and Prince Edward during the procession through Westminster

He was joined by Prince Harry, who is also not donning military dress and bowed his head instead of saluting the late monarch.

The Duke of Sussex was also barred from wearing his military uniform after departing from royal duties. The Prince, accompanied by his wife, Meghan Markle, the Duchess of Sussex, looked sombre as he followed behind his grandmother’s coffin, wearing military medals on his chest.

The decision to ban Harry and Andrew from wearing military uniforms in events following the Queen’s death at Balmoral last Thursday is a reminder of how both now have limited involvement in the Royal Family.

Prince Harry spent 10 years in the Army, but he was stripped of his honorary military titles in 2020 after he and his wife Meghan Markle announced they were stepping down as senior working royals and moving abroad.

His uncle the Duke of York, who was forced to stand down from public life in 2019 over the Jeffrey Epstein scandal, is the only other royal banned from wearing military uniform at the ceremonial events and funeral. 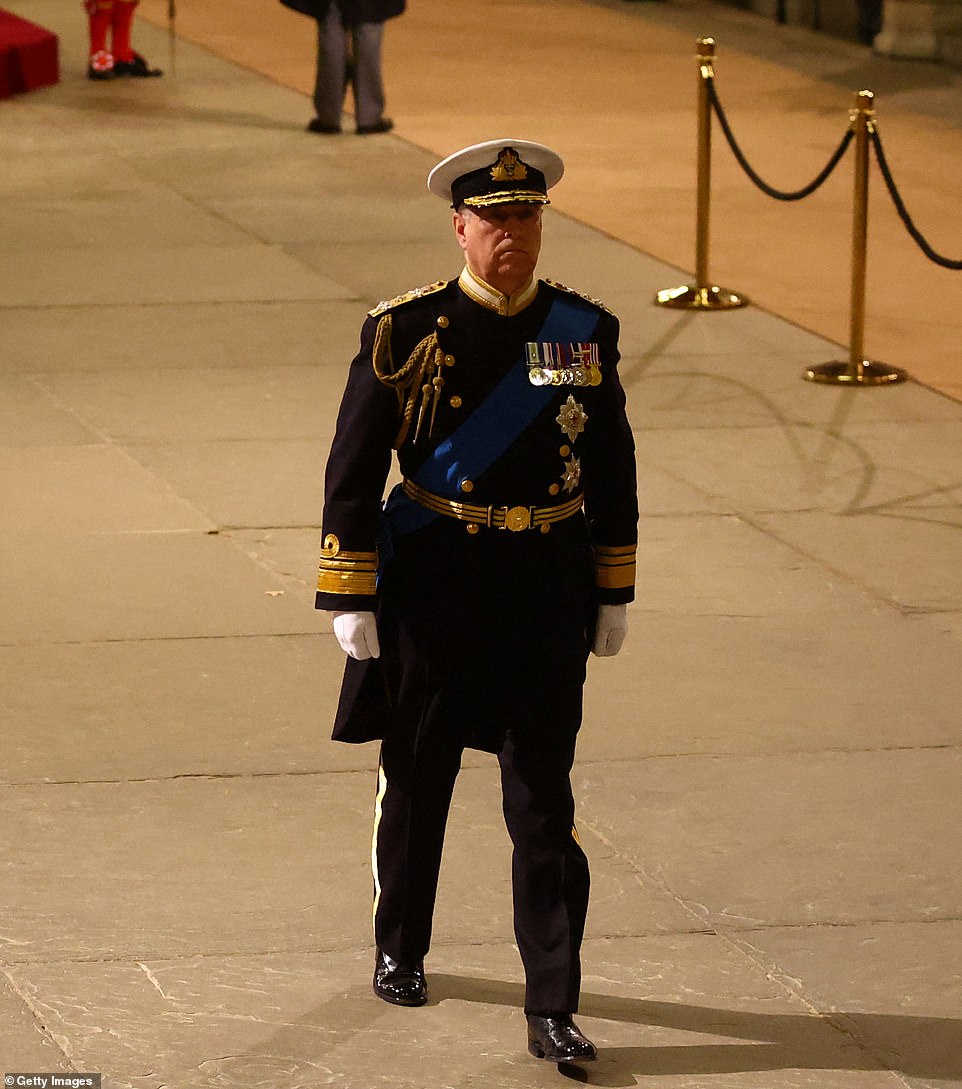 Prince Andrews has been visible throughout the events laid on to commemorate Her Majesty, having also been seen reading floral tributes at Balmoral with his daughters after The Queen died.

Previously, the Duke of York was allowed to wear his military uniform as he joined his siblings for a ‘final vigil’ around his late mother’s coffin as she lies in state at Westminster Hall.

The Duke of York, 62, was pictured arriving at the vigil in London with his younger brother, Prince Edward, in his full uniform after King Charles lifted a ban on him wearing the outfit.

On Monday, the Queen’s children took part in a similar Vigil of Princes ceremony at St Giles’ Cathedral, Edinburgh, where they stood around their mother’s coffin.

During that ceremony Prince Andrew was not wearing his military uniform as he is no longer a working royal.

As the Queen’s children, along with Prince William and Prince Harry, followed the Queen’s coffin from Buckingham Palace to Westminster Hall on Tuesday, neither the Duke of York nor the Duke of Sussex were wearing their uniforms – instead dressed in suits.

However as Andrew replicated the ceremonial act with his siblings this evening, in which they ‘took guard’ and surrounded their mother’s coffin, the Falklands War veteran was allowed to wear his military uniform.

It is thought King Charles lifted the ban on Andrew’s dress as a ‘mark of respect for his mother’.

This evening the King, Princess Anne, Prince Andrew and Prince Edward stood guard over their mother’s coffin in silence for 10 minutes while members of the public filed past.

Meanwhile other members of the Royal family including Prince Edward’s wife Sophie Wessex, Princess Anne’s daughter Zara Tindall and her husband Mike, and Prince Andrew’s daughters, Beatrice and Eugenie, watched on in the stands.

The new Queen Consort Camilla was also present in the stands as the family paid their respects to the late monarch.

Princess Beatrice’s husband, Edoardo Mapelli Mozzi, appeared visibly moved as he put his hands to his face while watching the ceremonial vigil.

As King Charles lifted the ban on both Andrew and Harry wearing their military uniforms, it is also expected the Duke of Sussex will be allowed to wear it at a separate vigil for the Queen tomorrow night, in what was labelled a victory for ‘common sense’.

The Prince of Wales and the Duke of Sussex will reportedly join the Queen’s six other grandchildren in a special 15 minute vigil at Westminster Hall.

It is believed the eight grandchildren will pay respects to the Queen by standing in silence beside Her Majesty’s coffin – in a scene which will mirror the Vigil of the Princes.

What uniforms and medals were members of the Royal Family wearing during Queen Elizabeth II’s funeral?

The King wore his Royal Navy uniform and his son and heir dressed in RAF colours at the funeral of the Queen in nods to the branches of the armed forces in which they both served.

Both the Duke of Sussex and Duke of York, who also served in the military, were dressed in formal mourning clothes for the state funeral because they are no longer working members of the royal family.

The King wore the Royal Navy No 1 tailcoat with sword, the collar of the Order of the Garter, Order of the Thistle Sash, Order of Merit neck order, Garter Star and Thistle Star.

Charles had a six-year military career, mainly flying for the Royal Navy.

The Earl of Wessex wore the Blues Uniform with the rank of Honorary Royal Colonel of the Royal Wessex Yeomanry, with the Garter Star and Sash and the Grand Cross of the Royal Victorian Order (GCVO) star.

Prince Edward did not serve in the military but spent a short time as a Royal Marines officer cadet after leaving university in the 1980s.

The Prince of Wales

The Prince of Wales wore the RAF No 1 uniform with the Garter Sash with RAF Pilot Wings and the Garter Star Chest Order.

He also wore the Gold, Diamond and Platinum Jubilee Medals.

William spent seven years in the military, including more than three years as a search and rescue pilot.

The Princess Royal wore a Royal Navy full ceremonial uniform in the rank of Admiral.

She did not serve in the military but holds a number of honours and titles.