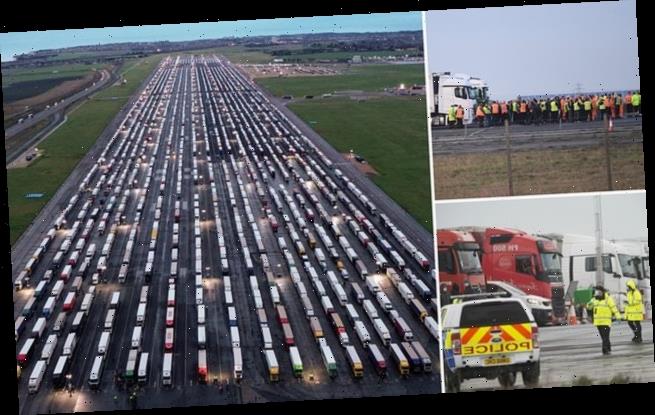 A 12 foot-deep ‘sinkhole’ has emerged on the runway at the former airfield that housed 4,000 lorries which were attempting to take goods across the Channel.

The disused Manston Airport in Ramsgate, Kent, was used to accommodate 4,000 HGVs as a way to ease congestion around the Port of Dover pre-Christmas. 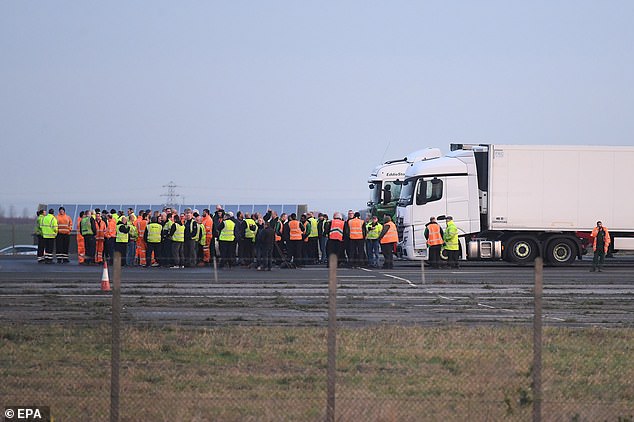 The disused Manston Airfield in Thanet, Kent,  (pictured) was used to accommodate 4,000 HGVs as a way to ease congestion around the Port of Dover pre-Christmas

The sinkhole, which first appeared on Boxing Day, is estimated to be around 5ft by 4ft across and a depth of 10 to 12ft.

Director of the company RiverOak Strategic Partners that owns Manston Aiport Tony Freudmann believed the hole, thought to be caused by water erosion, is manmade.

Mr Freudmann told KentOnline after visiting the site: ‘I’m not an expert, but speaking as a layperson, it looks to me that the hole is man-made.

‘I think it has been dug out for some reason in the past and then been capped.’

He also explained how the hole is not on the main runway but on ‘an old taxi runway’ which runs alongside it. 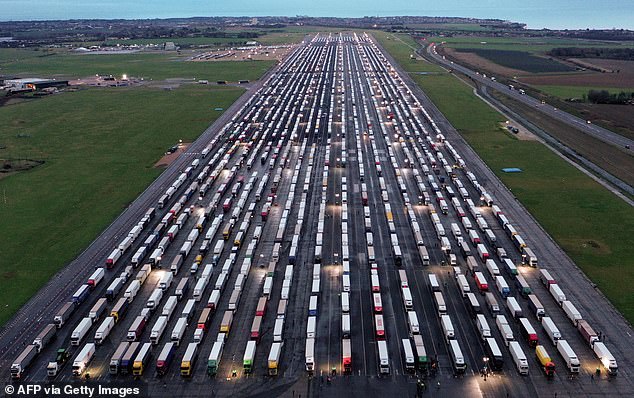 The usage of the disused Manston Airfield in Kent as a lorry park had originally been planned as a post-Brexit contingency in the event of a No Deal scenario.

Mr Freudmann revealed how there were no lorries left at the site from before Christmas and said it was expected to remain quiet for the next few days at least.

Environment Agency and Kent County Council officials have been on site to assess the cause of the ‘sinkhole’ which has reduced the holding area by 50 HGV spaces.

A Department of Transport spokesman told MailOnline: ‘Once we became aware of the issue at Manston we acted quickly to ensure the specific area was safely cordoned off, allowing the rest of the airfield to remain in use.’ 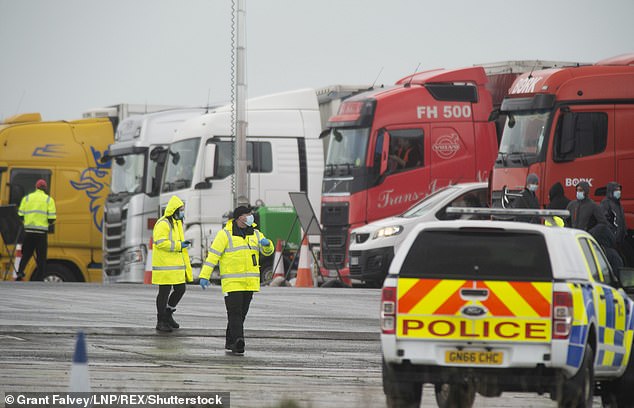 The usage of the disused Manston Airfield in Kent as a lorry park had originally been planned as a post-Brexit contingency in the event of a No Deal scenario. Pictured: The Army and NHS staff at Manston Airport administering Covid-19 lateral flow tests

Manston started life during the First World War as a military station in 1915 with a base at Westgate Bay for seaplanes, before growing to include four underground hangars, a railway line, a power station and barracks for 3,000 men by the end of the war.

It was again an important forward based during the Second World War and Barnes Wallis used the base to test his bouncing bomb in 1943 before the famous Dambusters raid.

Post-war it became an American base for eight years and then returned to the RAF in 1960 where it became a major diversionary airfield for aircraft in trouble. In the following decades there were also holiday charter flights organised, especially over the summer.

But the closure of RAF Manston was announced in 1999, with the civil part of the airport continuing – but this also then shut in 2014 with the airport losing £10,000 a day, one year after it was bought by Stagecoach co-founder Ann Gloag for £1.

It boasts the 11th-longest civilian runway in the UK at more than 9,000ft, meaning it is nearly two miles long.

A sinkhole is a hole in the ground created by erosion and the drainage of water.

They can range in size from a few feet in diameter to the size capable of swallowing entire buildings.

They are a natural phenomenon but the process is often amplified by human processes and interference.

There are two basic types of sinkhole which are separated by how they form.

Slow developing ones are known as a cover-subsidence sinkhole and those that appear suddenly are called a cover-collapse sinkhole.

The sudden holes which seize headlines are the latter and can cause devastation and even death.

Often, it involves soluble rock, such as limestone, becoming moist and eroding rapidly.

This then leads to a swift loss of land and a sinkhole emerges.