DUP threaten to pull their support for Theresa May and spark an election if her Brexit deal is voted through – but they WILL keep her in office if it fails, claims Rees-Mogg 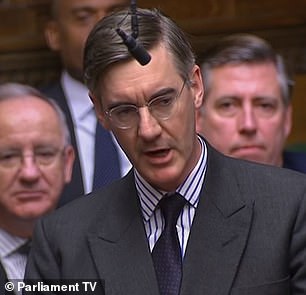 The DUP have threatened to pull their support for Theresa May and send her premiership crashing down if her Brexit deal is passed next week.

The party – who are propping the Tories up in No 10 in a confidence and supply deal – are furious at the Brexit deal and demanded the PM go back to the negotiating table.

The have promised to back the PM in a confidence vote if the Brexit deal is rejected by the Commons next Tuesday.

But they have effectively warned that they will not if her Brexit deal is passed by MPs next Tuesday.

Mr Rees-Mogg told an ERG meeting in Parliament today: ‘The (Democratic Unionist Party) DUP will support the government in a confidence motion if the Withdrawal Agreement (WA) is voted down.

‘But the risk of losing (their support) and having an election is if the WA goes through.’

The small Northern Irish party wields an enormous amount of power in the Commons after emerging as kingmakers after the Tories lost their majority in the General Election disaster last year.

Leading DUP MPs have publicly lashed the PM’s deal repeatedly – warning it crosses their ‘blood red line’ that Northern Ireland is not treated any different to the rest of the UK.

Speaking in the Commons yesterday, Mr Dodds warned the PM that his party is happy and ready for another General Election.

He said Mrs May ‘has misjudged the mood of the country’ as he attacked the Northern Ireland backstop proposal.

He added: ‘In terms of the views of the people of Northern Ireland I’m quite happy to put it to a test any time. 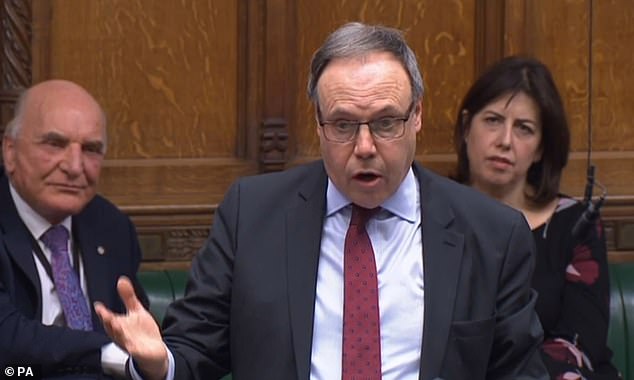 ‘We will happily go to the electorate and put our views to the people if needs be, and I’m quite certain we would be returned in greater numbers than today.’

Mr Dodds said the document is ‘devastating’, adding: ‘This advice concisely sets out the stark reality of the operation of the backstop.

‘Its publication demonstrates how the Prime Minister has failed to abide by the commitments she gave in that the United Kingdom as a whole would leave the European Union and that she would ensure there would be no customs or regulatory divergence within the United Kingdom.

‘This backstop is totally unacceptable to unionists throughout the United Kingdom and it must be defeated and arrangements renegotiated that uphold the commitments which the Prime Minister and her Government has made in the House of Commons.’

It comes in another day of dramatic political events as the crunch Brexit vote looms nearer.