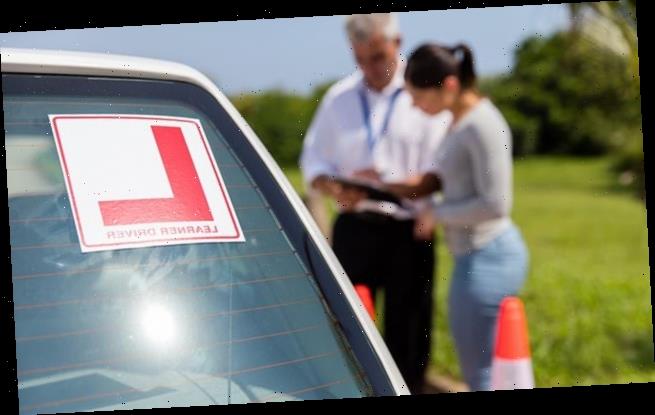 Driving lessons and tests will resume in England and Wales this month, with instructors needing to work through a huge backlog of students.

Both have been prohibited for much of the past 12 months due to coronavirus restrictions.

Yesterday, the Driver and Vehicle Standards Agency confirmed lessons will restart on April 12, to fall in line with the government’s second phase of restriction easing.

Driving tests will be allowed to take place from ten days later on April 22.

The agency tweeted that from Monday driving lessons with instructors, all theory tests, motorcycle tests, lorry lessons and tests, car and trailer tests and minibus lessons and tests can resume. 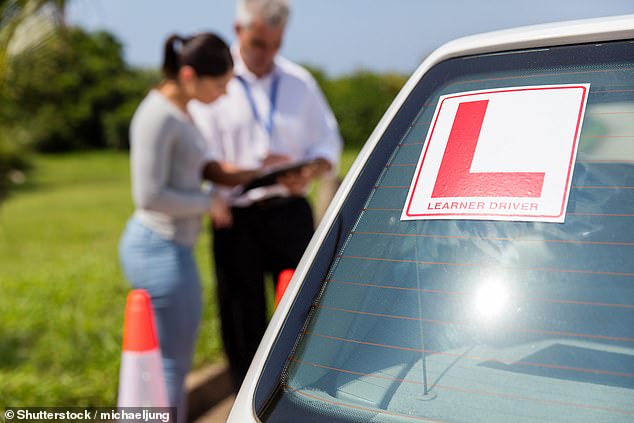 From April 22, driving tests and ADI (approved driving instructor) parts 2 and 3 (and standards checks) can restart.

Robert Cowell, interim managing director of the AA Driving School, welcomed the confirmation, saying the organisation had had 26,371 online requests between December and mid-March from people wanting to be notified when lessons were allowed again.

He said: ‘After months of uncertainty this is truly welcome news for driving instructors and pupils around the country.

‘More than 26,000 prospective pupils contacted us during the latest lockdown, so demand is going to skyrocket now instructors can open their books again.

‘Those who started learning to drive before lockdown will now tackle the additional challenge of starting back after the long break. 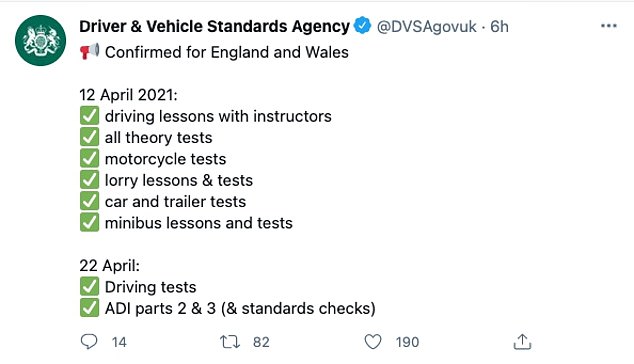 The agency tweeted that from Monday driving lessons with instructors, all theory tests, motorcycle tests, lorry lessons and tests, car and trailer tests and minibus lessons and tests can resume

‘Our driving instructors are ready to help them overcome the additional challenges they have faced being a lockdown learner and we are confident many will be on the road to success very soon.’

The news comes after data analysis showed that driving licence numbers among young people had fallen to the lowest level since current records began.

The decline is sharper than the fall in the number of young people in Britain over the same period.

In January, a petition for driving instructors to pass their students based on their experiences during lessons gathered over 27,000 signatures as the number of young people left waiting for a test began to surge.

The campaign however divided opinion, with many saying the move would increase the number of dangerous drivers on the road.

What else did Boris Johnson say will change from April 12?

The next step of easing lockdown will go ahead as planned: The PM confirmed that non-essential shops, gyms, hairdressers and libraries in England will reopen from April 12 while pubs and restaurants will be allowed to serve customers outdoors. Overnight stays away from home in England will be permitted. The majority of outdoor settings and attractions like zoos and theme parks can also reopen.

Foreign travel: A traffic light system will be rolled out when international travel is allowed again but the PM refused to commit to his target roadmap date of May 17 for resuming flights. The new system will see countries rated green, amber or red based on data including vaccination levels and Covid-19 case numbers. Return travel from countries on the green list will be quarantine-free although people will still need to take tests before their trip and when they return. Ministers said it is ‘too early to say’ which countries will be green.

Vaccine passports: The PM unveiled the initial findings of a Whitehall review into the use of ‘Covid status certification’. The documents will combine vaccination, testing and immunity data and will be used to determine access to large-scale events. The Government has left the door open to the documents being used for access to pubs and restaurants.

Working from home and social distancing: Initial findings from a Government review suggest both WFH and social distancing could continue past ‘freedom day’ on June 21 – the last date in the roadmap. The review said it is looking at ‘how and when to safely lift or amend the 1m+ rule’ as well as other restrictions like working from home. It stressed that the conclusion will ‘depend on the latest data and evidence on the state of the pandemic’ while ‘the extent of any relaxation in social distancing measures’ will be linked to the success of vaccine passports. The findings do not contain a specific target date by which the rules will be lifted.

Return to spectator events: Ministers will run a series of pilot programmes in different venues to test the best ways to bring back crowds to live events. The pilots will be closely linked to the vaccine passports initiative, although the initial events will focus entirely on using testing data to grant access. Participating venues will include the World Snooker Championship at the Crucible in Sheffield and the Circus nightclub in Liverpool. Ministers are also hoping to admit a crowd of up to 20,000 people to Wembley for the FA Cup final on May 15, with a second wave of pilots taking place from the end of May.

Back to normal: A new paper published by the Government’s SAGE committee said life will not go back to normal this summer even if the PM’s roadmap goes completely to plan. SAGE sources warned that while vaccines prevent the vast majority of people from falling ill and dying from coronavirus, they ‘are not good enough’ to see all curbs lifted ‘without a big epidemic’. The experts claimed that ‘baseline measures’, including some form of social distancing and masks, would need to remain in place until this time next year. They said they are ‘reasonably confident’ that Covid will be manageable by then.