With the Iranian missile attacks on two Iraqi bases housing US troops, the region is on the brink of yet another full-blown conflict.

Tehran says this is a proportionate response to the US killing of the Iranian General Qassem Soleimani less than a week ago. That action was unprecedented. To kill a serving member of the armed forces of another sovereign state is seen in Iran as a declaration of war.

Analysts speculating on the Iranian response have tended to suggest that Iran would not directly retaliate, given the disparity of fire power between the United States and Iran. But the barrage of Iranian missiles targeting US troops in Iraq suggests that the Iranian leadership could not settle for anything less than explicit retaliation. 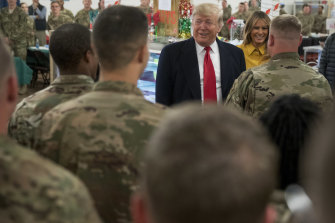 President Donald Trump speaks during a December 2018 visit to the Ain Asad air base, one of the two facilities hit with Iranian missiles on Wednesday.Credit:AP

Now President Donald Trump has the next move. He has earlier tweeted that he was ready to order strikes on 52 Iranian targets, including cultural sites (which of course would be in violation of international law and was duly rejected by the Pentagon).

US strikes on Iranian military targets as well as nuclear facilities are a distinct possibility. Trump’s erratic behaviour and disregard for the consequences of his actions do not bode well for a calculated and measured response.

Furthermore, hitting the Iranian regime has been openly discussed in the corridors of the White House ever since Trump took office and announced that he would tear up the 2015 nuclear deal that his predecessor signed with Iran. Regime change in Iran remains the unspoken objective in US calculations.

The US administration has also been lobbied by Israel and Saudi Arabia to take definitive action against Iran. Both states have urged Washington to hit Iran before it’s too late, that is before Iran builds a nuclear bomb. For its part, Iran insists it does not pursue a nuclear bomb, even as it withdraws from the 2015 deal which was designed to prevent that eventually after Trump walked away from the deal in 2018.

In the course of Trump’s term in office, and much more immediately following the US killing of Soleimani and the Iranian retaliation, a significant momentum has built up for a full-blown conflict. The irony is that President Trump campaigned on extracting the United States from wars in the Middle East. Now he is on the verge of starting a new one. But nobody seems to know what this war is supposed to achieve for the United States, beyond the obvious punishment and humiliation of a weaker state. 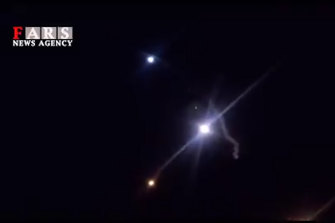 It's a war that would simply breed further antipathy and resentment towards the United States across the Middle East. This is hard to believe, but Washington seems oblivious to lessons of history and its experience in the region.

Another war in the Middle East would be devastating for the region. Given the importance of Middle Eastern fossil fuel for the global economy, a war involving the United States and Iran would have major global ramifications. One would expect major world powers to seek a cooling of tensions. Europe, Russia and China have no interest in another war. In fact all have appealed for calm.

Russia and China also have their own agenda of challenging US hegemony and have found in Iran a ready regional partner. The joint naval exercise in the Gulf of Oman by Iran, Russia and China only two weeks ago was a culmination of years of congruence between their anti-US interests.

But what could Russia and China do beyond appealing for calm? Neither has a security alliance with Iran and would be extremely unlikely to be drawn into open conflict with the United States. They may be friendly with Iran, but not prepared to risk all.

This basically gives President Donald Trump a carte blanche to do as he sees fit. Let’s hope he sees fit to step back from the brink.