A dog manicure descended into chaos when a frisky bulldog refused to hold still and instead climbed on top of the groomer and humped her back.

The bulldog moved away from groomer Kali Lander, 21, every time she went to clip his nails before it mounted her at Shampoochie Pet Grooming in Granbury, Texas.

In a hilarious video, Kali found herself pinned down on the counter by the dog before she was rescued by another worker and laughed off the debacle. 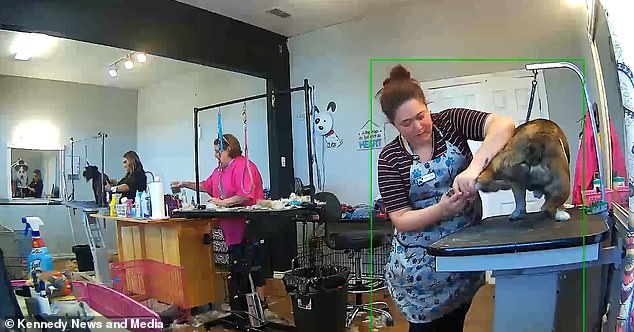 Groomer groomer Kali Lander, 21, trims the nails of a bulldog at Shampoochie Pet Grooming in Granbury, Texas, before it humps her in a viral video 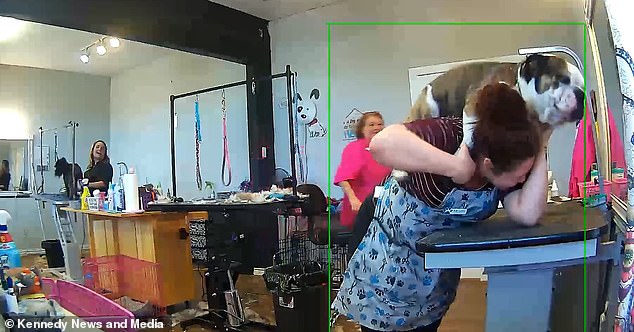 Kali begins the dog pedicure by trimming the bulldogs nails on his front legs as he licks her arm.

As she moves to his hind legs, the dog begins moving around making it difficult for her and forcing her to lean in.

Suddenly he pounces, climbing on to her back and humping her as she cracks up laughing. 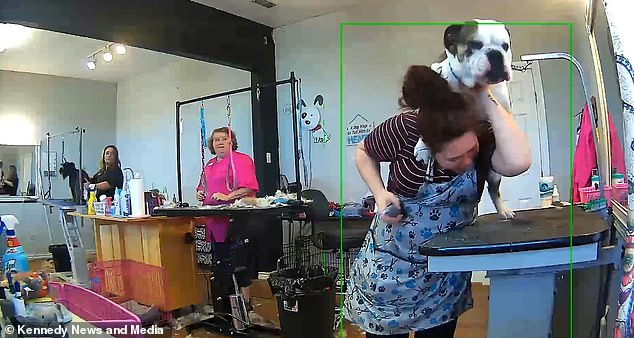 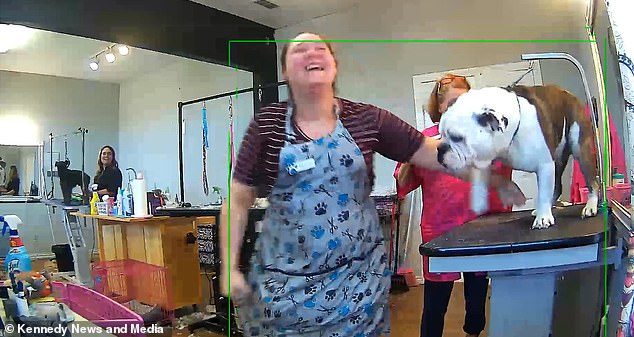 Kali bursts into laughter after the dog is pulled off her by coworker and Shampoochie owner Kelly, 61

‘It was just so funny. I couldn’t believe it. It’s still so hilarious. I watch it multiple times a day still.

‘I had bathed the dog and afterwards I went to do his nails. He’s normally a little difficult anyways. This time was a little different.

‘Everytime I went to do it, he would spin around. It frustrated me because I’d been doing that for a few minutes.

‘I finally had had enough of it so I bent over a little bit so I could get closer to his legs to get a bit more grip on them, and that’s when he jumped on me.

‘I didn’t know what to do. I just started laughing. I’m so glad we caught it on the camera. 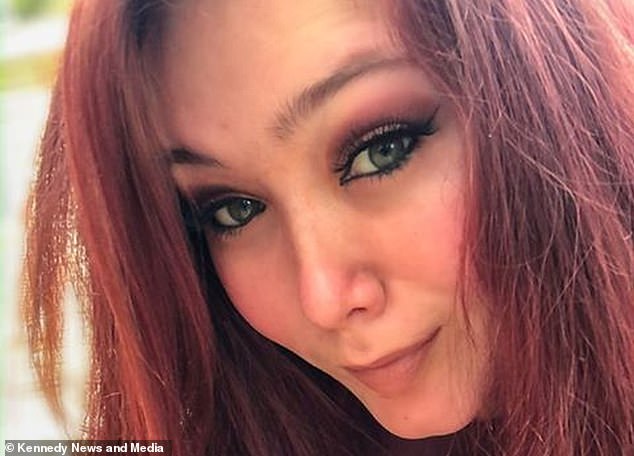 ‘Afterwards we were dying laughing because it was the funniest thing ever. It’s never happened to me before in the whole almost-year I’ve been working here.’

Kelly joked that ‘love is in the air’ as she shared the video filmed last month online, where it received more than 17,000 views, likes, shares and comments.

She said: ‘It did make our day. We had just been saying the day before that we never catch anything funny on our cameras.

‘The first thing Kali said afterwards was, “you’ve got something on your cameras now”.

‘I’m really surprised by the reaction. I didn’t think it would get as far as it has. People have said it made their day. It made our day.

‘We had had a really busy week, and we were just exhausted. That was just a highlight. Kali loved it. She just cracked up about it.’