A doctor has been charged with murder after a toddler died and his twin brother was left in a critical condition following a circumcision a refuge centre in Rome.

The two-year-old boy was said to have died from blood loss after a botched operation at a migrant centre on Saturday.

A 66-year-old man, thought to be the doctor, has been charged with murder, according to Italian media.

Officers are said to be investigating the doctor’s qualifications for practising and charged the suspect yesterday.

The operation took place in a centre provided by the non-profit organisation Arci and the council in Monterondo, a north-western suburb of Rome.

The doctor, who is believed to be an American citizen of Libyan origin, called for emergency help when the boy began excessively bleeding, Italian media reports.

His twin brother also underwent the operation and was admitted to Sant Andrea hospital but was later transferred to the paediatric intensive care unit at Gemelli Hospital in Rome. 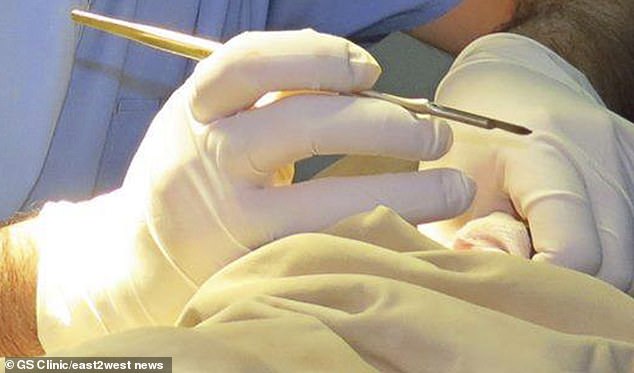 A 66-year-old man, thought to be the doctor who carried out the circumcision, has been charged with murder, according to Italian media (stock picture)

The youngster and his brother, who have not been named, were born in Italy.

The boy’s mother is said to be a woman of Nigerian origin, who is believed to have sought asylum in Italy and has five other children in Nigeria.

She was said to have asked for the religious operations in line with Nigeria’s Islamic traditions, despite being Catholic, local media report.

Arci said the charity would take civil action once those responsible for the child’s death had been determined by police.

In a statement on Facebook the charity added: ‘We are shocked to learn of the death of a child and the serious condition of his twin in Monterondo.

‘The two children are hosted in a welcome centre that Arci has run with Monterotondo Council since 2009.

‘It is a tragedy that leaves us speechless. We are anxiously awaiting a medical update on the second child.’

Hospital staff at Gemelli confirmed that the brother is now in a stable condition.

Antonino Lupi, the mayor of Monterotondo, told the Corriere Della Sera newspaper: ‘It is an absurd tragedy.’

More than 5,000 circumcisions are performed in Italy each year but more than a third are carried out illegally, according to health charity Amsi.

Circumcision operations at private clinics in the country can cost up to €4,000, but they are can be offered for €50 to €20 at backstreet surgeries.