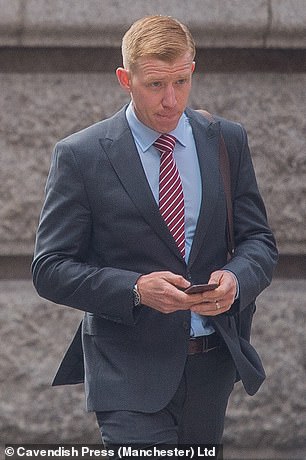 Army Major David Roscoe, 41, a sports therapy and rehabilitation doctor over-reacted and grabbed his wife Louise by the arms

Army Major David Roscoe, 41, a sports therapy and rehabilitation doctor over-reacted and grabbed his wife Louise by the arms as they argued about who should pick up their pet puppy’s excrement.

The doctor stated he was ‘overwhelmed’ after having spent six months rehabilitating the child victims of the Manchester bomb attack, visiting schools to speak to teachers and councillors with recommendations on how to help the children.

During the bust up, family doctor Mrs Roscoe, 39, was branded a ‘stupid moron’ and a ‘f*****g c**t’ by her husband before being forcibly pushed out of their family home in the village of Denton near Grantham, Lincolnshire.

The couple’s three children were in a playroom at the time of the incident.

Roscoe, who also treated Iraq War veterans at a military rehabilitation centre in Loughborough, was later arrested and convicted of common assault upon his wife and subsequently referred himself to the General Medical Council for a disciplinary hearing.

At the Medical Practitioners Tribunal Service Roscoe – whose father served as a Royal Marine – wept as he admitted the assault on his wife but said he had been ‘overwhelmed’ after spending six months rehabilitating youngsters hurt in the May 2017 bomb attack which killed 22 people following an Ariana Grande concert.

He and his wife – who have been together for 19 years, nine of them married after they met at medical school at Leicester University – have since reconciled. 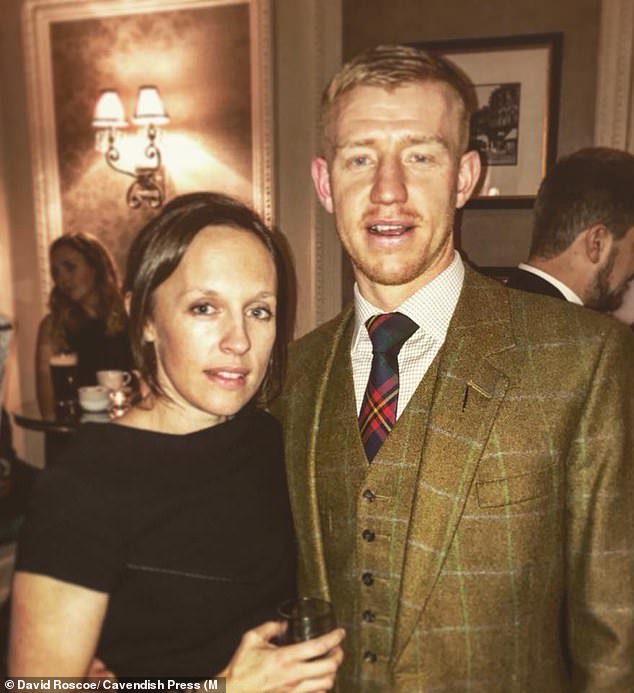 The hearing was told police were called by Mrs Roscoe to the family home on January 29 last year. Mr Carlo Breen lawyer for the GMC said: ‘She alleged she had been pushed by Dr Roscoe saying the relationship had deteriorated over the last couple of years.

‘She said that evening, they were arguing over the fact she had not picked up dog poop and the doctor had set the agreement that she would in fact, pick it up. She alleged that the doctor called her a moron and stupid, and swore at her throughout. She alleged he called her a ‘f*****g c**t’.

‘She told the officer that the doctor was unable to deal with things that were not up to his standard and she told the police this was over minor things that frustrated him and caused him to shout and swear.

‘She referred to the doctor belittling her as a wife and as a mother. He would bring up her career as a GP and use it to belittle her. When this incident occurred, the children were close by. When he was interviewed he admitted the assault straight away. Many factors appeared to cause him stress and anxiety, mainly his living arrangements, his fathers health, his brothers health and his aunts health.

‘But he acknowledges that those matters do not excuse his behaviour at the time’.

Roscoe was given a conditional discharge for 18 months and ordered to pay costs of £105 when he appeared before Lincolnshire magistrates in March last year. 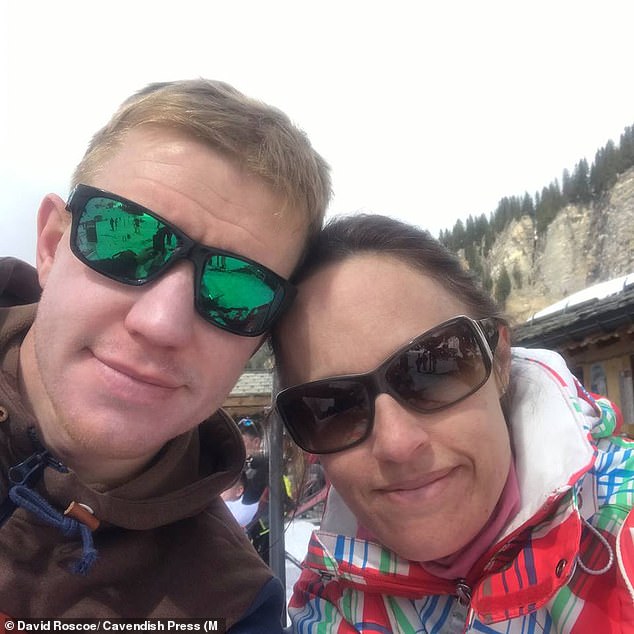 David Roscoe said his Dad had also been seriously ill in the months leading up to the incident. Pictured with wife Louise

‘The year leading up to this incident was immense. It started in the January when I had gone away for the weekend for my birthday. I arrived on the plane and I received a message that my dad was seriously ill so I turned around and came home immediately as I was told it was terminal. I’ve also got a disabled brother.

‘I recognise these things were building up and it got manic. I just tried to deal with it one by one. It’s like I was hitting a tree, I’d turn around and there’d be another tree. I carried on and thought I was going to get through it. I did a lot of exercise.

‘Unfortunately I was involved with the incident in Manchester in May. It was felt I could go to offer something to rehabilitate the children there. There was nobody else to do it, that was what we had to do, there was no plan B, I was the plan B.

‘It felt like a no-brainer at the time. It was very short notice so there was no living arrangements made. I just said I’d make it work and I just thought this was more important and I stayed with my mum and dad.

‘My output was to try and help rehabilitate the children, I was going to visit schools and teachers and spending time with counsellors up here. I also met with special education providers. My job was to put forward a sort of recommendation for how things can be and a series of safety nets. I wanted it to be right. This came to an end the day before what happened with my wife. 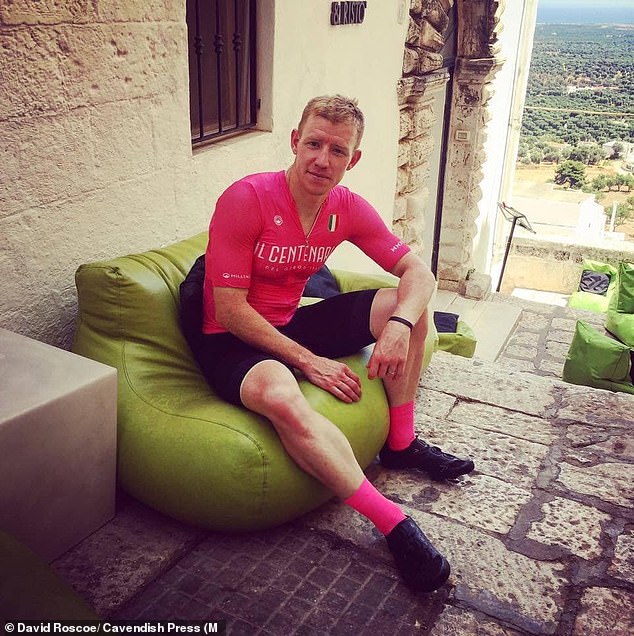 ‘Looking back to the incident, I just feel ashamed that it had got to that, it feels like I was a different person. I have no doubt my behaviour was wrong and my wife shouldn’t have had to suffer. I think she was overwhelmed by how I was. She was clearly scared. I knew she was scared of what was going on, she was scared when I was suggesting the marriage was breaking up.

‘I just got to the point where I just needed to take it out of my head. It must have been terrible. I was just shameful and embarrassed. I never thought I could have that impact on somebody. When I was arrested by the police I was just relieved and I felt relief that someone was going to listen.

‘I’m not looking to excuse my behaviour, it was my responsibility. It was never done with malice. We were rowing about inconsequential things. I suppose I had the commando mentality of ‘just deal with it’. My training post was disintegrating and it was something I had worked towards. I had been living away from home for six months.

‘I was overwhelmed at the Manchester bombing, it just felt like another mountain coming at me.

‘I went from feeling like I couldn’t go to anyone to everyone asking what I wanted to say or do. I couldn’t understand what was going on. My mother was broken, she said she had no idea the effect this was having on me. It took her quite a while to understand how. 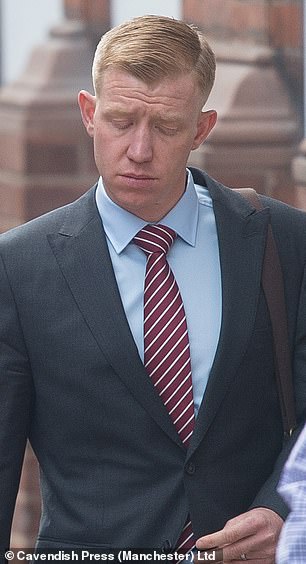 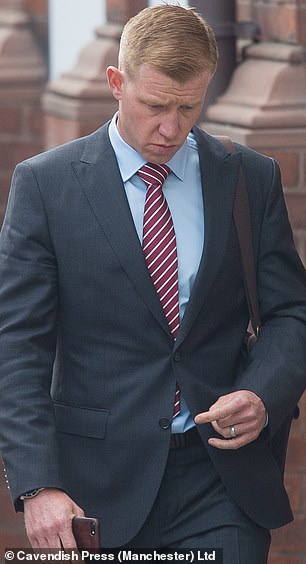 He added: ‘I can’t remember what we were arguing about in hindsight. We had just bought a puppy, which wasn’t the best time but it wasn’t about the dog poo at all. I have a high personal standard professionally, in respect of my values and integrity. When it comes to the mundane things in life, that was hard for me to cope with.

‘The children didn’t see anything as they were in the playroom. When I put my hands on her she was wearing socks and she slid across the floor. I went to collect her things. I told the police I wished I’d never have done it.

‘It wasn’t with malice or intending to hurt her. I pushed her into the corridor, not out of the house. I should have just walked out instead. My children should never have been exposed to it. At the time I lost touch with everybody and felt lonely but my marriage is different now. It was the perfect storm of life events. We, my wife and myself, are a team now’.

Since the early 1970s, Ozzy Osbourne has been a rock icon. From his early days with Black Sabbath through to...

Lili Reinhart has a new four-legged friend! On Wednesday, the Riverdale actress, 23, shared an Instagram photo of her “new...