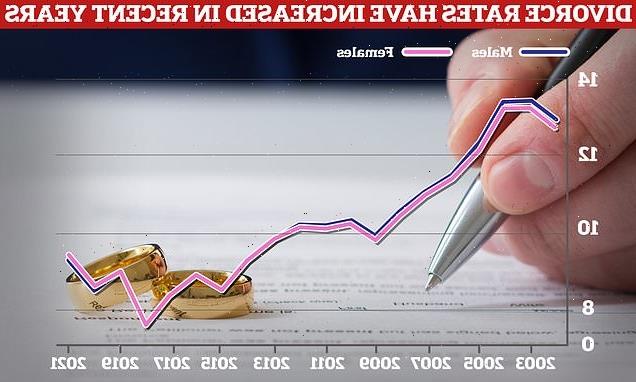 Divorce rates have spiked throughout England and Wales to the highest number in eight years while the number of households has risen to 24 million, newly released data found.

In total, 113,505 couples were granted a divorce in 2021 alone, according to figures released on Wednesday by the Office for National Statistics (ONS).

Meanwhile there are now 24.78 million households in England and Wales, marking a 6.1 per cent increase (or 1.4 million more houses) on the data for 2011.

The boroughs of Kensington, Chelsea and Westminster experienced drops in the number of households by up to 14.8 per cent.

Helen Morrissey, an analyst at Hargreaves Lansdown, said the divorce data could be indicative of the pressure Covid lockdowns put on couples.

But she also noted many divorce applications were delayed throughout the pandemic, which could have also inflated the data set. 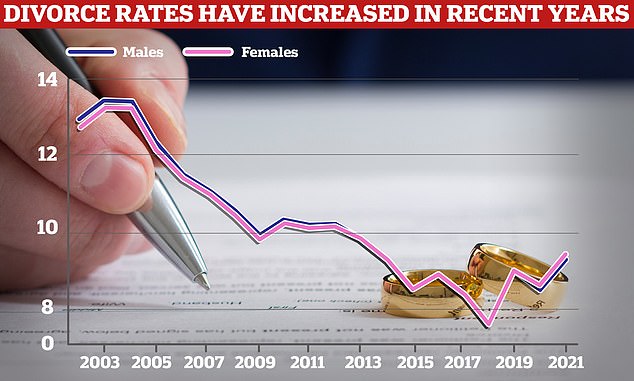 Divorce rates have spiked throughout England and Wales to the highest number in eight years, newly released data found

‘Of course, the pandemic will have played its part with disruption to court activity meaning many applications have been delayed but the fact remains the figures are still up on pre-pandemic,’ she said.

‘Looking ahead we could see numbers continue to swell as pandemic lockdowns will have put even the strongest relationships to the test.’

Ms Morrissey also cited the implementation of no-fault divorces earlier in 2022 as a further driver to couples splitting, as there is now no longer any need to assign a reason to the split.

She said: ‘In theory this has the potential to take a lot of acrimony and time out of the process which could save you a lot of money as well as stress.’

Statistics for April 2021 to April 2022 released earlier this year indicated more than 12,000 new divorce applications were filed as ‘no-fault’.

Female couples made up 67.2 per cent of the same-sex divorces. And among the opposite-sex divorces, women were again more likely to file for separation.

Unreasonable behaviour was the most common reason for individuals petitioning for divorce.

The statistics also revealed 10 per cent of couples married in 1965 had filed for divorce by their 10th wedding anniversary.

This number spiked to 25 per cent in those married in 1995, but decreased again for couples married in 2011, which 18 per cent filing for divorce by the 10-year mark.

Prior to the pandemic, data suggested the divorce rate was on a steady decline.