Disgraced Spanish opera superstar Placido Domingo, 81, ‘planned to meet a woman from sex-cult that forces its members into prostitution’

Disgraced Spanish opera sensation Placido Domingo planned a meeting with a member of a sex cult that forced women into prostitution, investigators in Argentina have alleged.

The star singer and last surviving member of the Three Tenors, 81, was identified by police during a probe into the controversial Buenos Aires Yoga School this week.

Domingo reportedly spoke with member Susana Mendelievich about meeting while he was in the city to perform in April.

The shadowy group ‘built a cult around its leader’ and reduced members to ‘a situation of slavery and/or sexual exploitation,’ according to prosecutors’ documents in the Argentine case against the school. 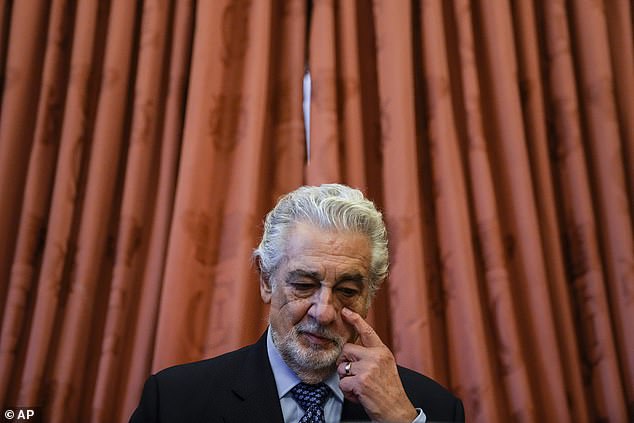 Domingo, pictured in Madrid last year, has faced a flurry of sexual harassment claims of late

Domingo, who since 2019 has faced a flurry of sexual harassment allegations, has not been accused of any wrongdoing.

The investigation into the sect has implicated people with connections to the classical music world and who performed with Domingo in the past, including Mendelievich, an Argentine pianist.

Mendelievich is alleged to be the person in charge of the organization’s sexual exploitation activities, according to a judicial official, who spoke anonymously.

‘When we leave the dinner we come separately, right?’ the man identified as Domingo says in the recording.

Mendelievich then talks to Juan Percowicz, 84, who was the alleged leader of the group.

‘He already called me and set up the deal so I can stay in his hotel tonight without his agents realizing,’ she said.

In an earlier call with Percowicz, Mendelievich implies she had previously met with Domingo in New York.

‘Among other things … Placido said he could come visit us. I mean, visit us means coming to visit me because he comes to my house in New York, and he reminded me of that yesterday,’ the woman identified as Mendelievich can be heard saying in the recording.

Sexual trafficking and exploitation were the main sources of income for the group that had an estimated revenue of around £450,000 per month, according to the official.

Domingo was one of opera´s biggest and most successful stars and is the only living member of The Three Tenors, which included the late Luciano Pavarotti and Jose Carreras.

Domingo´s image was tarnished in the United States after more than 20 women accused him of sexual harassment and other inappropriate behavior in encounters that took place from the late 1980s to the 2000s.

Dozens more in the classical music industry say his behavior was an open secret.

Investigations by the American Guild of Musical Artists and the Los Angeles Opera, where Domingo had served as general director, found sexual harassment allegations against him to be credible.

The accusations and subsequent findings halted Domingo´s career in the U.S. but he has continued to perform in Europe and Latin America.

His website says he is currently on tour in Mexico with performances later this month scheduled in Italy.