Did the Queen hint in Christmas message that Harry and Meghan were quitting? Royal fans point out photos of the Sussexes were missing from Her Majesty’s desk during her annual address

Royal fans have suggested that the Queen knew Prince Harry and Meghan Markle were set to quit as senior royals, even hinting at the shocking news in her Christmas speech.

The Queen delivered her annual festive message last month, but Harry, Meghan and Archie were all missing from photos on her desk.

Photos of the Duke and Duchess had been present in the Queen’s 2018 address but last month she opted to display images of her father King George VI, Prince Charles and Camilla and a family shot of the Cambridge’s.

Now, eagle-eyed royal fans are suggesting that the Queen was hinting at Harry and Meghan’s impending exit from royal duties. 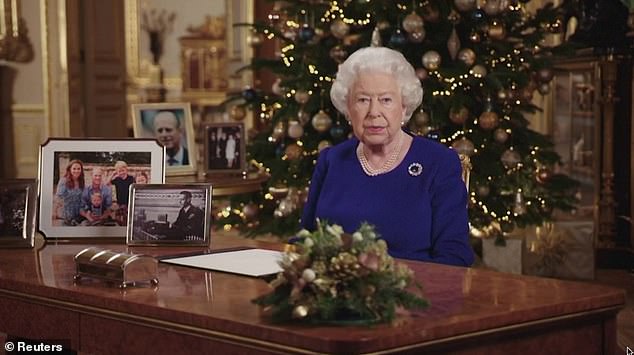 The Queen sits beside photographs of Charles and Camilla (1), Prince Philip (2), the Cambridges’ Christmas card picture (3), and her father George VI during her Christmas address. Fans believe the move was a hint at Harry and Meghan stepping down, with no photos of them in sight 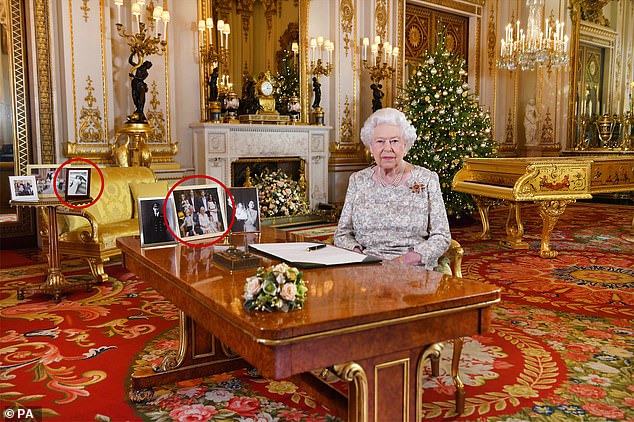 2018: Queen Elizabeth II after she recorded her annual Christmas Day message, in the White Drawing Room of Buckingham Palace in London. Prince Harry and Meghan can be seen in two framed photographs (circled)

One fan wrote: ‘Even at Christmas there was a scandal because during the Queen’s speech she had photos of all the family members except Harry + Meghan displayed on her desk.’

Another said: ‘The clue was there on Christmas Day. The Queen didn’t have a photo of them on the table. In plain sight. Classic Queen.’

While a third commented: ‘Prince Harry and Meghan Markle were missing from the Queen’s 2019 Christmas speech. Some said it was because of only heirs were in display. Now we understand clearly why.’

Harry and Meghan announced yesterday evening that they would be stepping down as ‘senior royals’ and starting a ‘progressive new role’.

However, despite the apparent hint from the Queen on Christmas Day, their dramatic decision is believed to have been taken without her knowledge, with Prince Charles and Prince William also not being informed.

They are learnt about the announcement as it broke on television news channels.

The couple, who plan to split their time between Britain and North America, made the bombshell announcement just days after returning from a six-week break in Canada.

A senior royal source said the Queen and her family were ‘deeply disappointed’. Another said the royals were ‘shocked, saddened and downright furious’ at the couple.

In a terse statement, Buckingham Palace said: ‘Discussions with the Duke and Duchess of Sussex are at an early stage. We understand their desire to take a different approach, but these are complicated issues that will take time to work though.’

Well-placed sources made clear that the shock announcement was a personal statement and ‘members of the family were not consulted on the contents’. 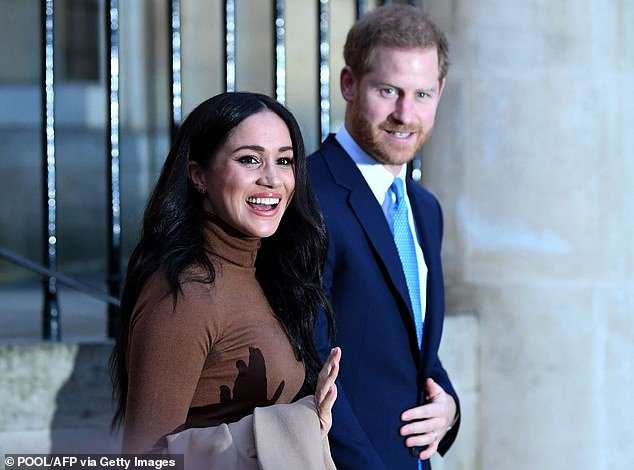 Another royal source said: ‘It’s deeply unfair to the Queen who doesn’t deserve to be treated this way. It is a shoddy way to treat her. The family understands that they want to do something different and is perfectly willing to help them. People are just devastated.’

Harry and Meghan’s statement said: ‘After many months of reflection and internal discussions, we have chosen to make a transition this year in starting to carve out a progressive new role within this institution.

‘We intend to step back as ‘senior’ members of the Royal Family and work to become financially independent, while continuing to fully support Her Majesty The Queen.

‘It is with your encouragement, particularly over the last few years, that we feel prepared to make this adjustment. We now plan to balance our time between the United Kingdom and North America, continuing to honour our duty to The Queen, the Commonwealth, and our patronages.’