Detectives are probing a string of arson attacks which left a man dead and a woman seriously injured.

Four similar attacks, believed to have been targeted, took place in the space of a week in Greenock, Inverclyde, with police appealing to catch those responsible.

Some of the attacks happened at family homes with accelerants lobbed through a window, while a stolen car believed to have been used in some of the crimes by three teenage suspects was found torched days later.

Police have launched a joint investigation with the Scottish Fire and Rescue Service into the attacks, which are suspected to be linked. 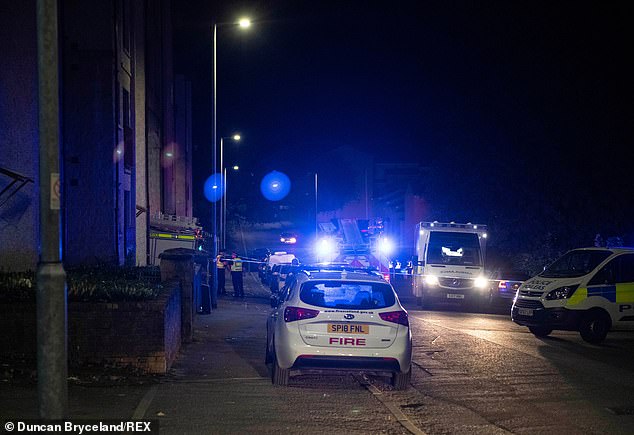 On September 16, a mother was badly hurt and needed hospital treatment when in a fire at a home feared to have been started by a firebomb being thrown through a window

A man aged 46 was found dead on September 14 after a fire at a home in Union Street, Greenock, around 10.35pm.

Two days later, on September 16, a mother was badly hurt and needed hospital treatment when in a fire at a home feared to have been started by a firebomb being thrown through a window.

The woman, aged 40, was at home with her nine-year-old daughter at the time of the blaze, at 11.05pm on Wellington Street, and a small white car was seen speeding away.

Around five minutes later witnesses reported seeing a white Suzuki Splash hatchback with registration number GK14 FZE speeding in a nearby road before being abandoned.

Two men who were passengers, described as in their late teens and skinny with grey hoodies zipped over their faces, got out the car while the driver was described as wearing a black hoodie zipped over his head with a scarf around his face.

All three ran off down Skye Street, and within a matter of hours at 2.20am on September 17, the Suzuki – which had been stolen 24 hours earlier – had been found ablaze on the same road. 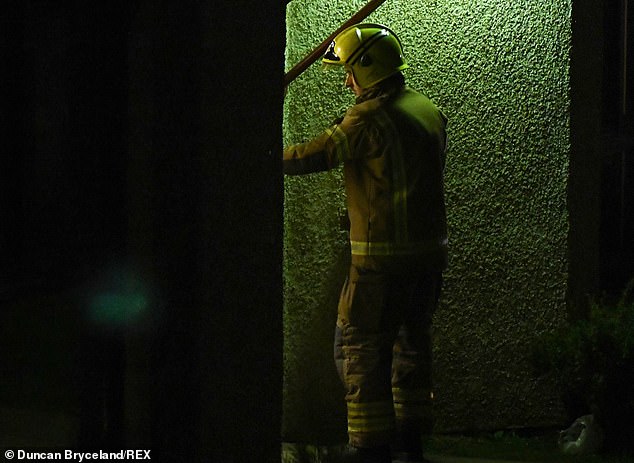 Emergency services were called to an incident, which is believed to have been a petrol bomb thrown at a flat in Greenock, Scotland

On Saturday, September 19 another fire was started in the town after a firebomb was thrown at a building on Cumberland Road, with a family inside.

A mum, 46, and her six-year-old daughter as well as another family member were unharmed but garden furniture was set alight and quickly extinguished.

Detective Superintendent Gerry McBride said: ‘I would like to start by saying how sickened we are by all of these incidents, whether linked or not, these have been unprovoked, targeted attacks which have resulted in both serious injury and death.

‘A couple of these attacks have also taken place while children have been present and it has been sheer luck that the number of people injured has not been any higher.

‘We want to make it absolutely clear that this behaviour will not be tolerated in our community and officers will do everything they can to find those responsible.

‘It is also important to reassure the wider community that although enquiries are still ongoing, we do not believe there is any risk to the wider public.

‘There will be an increased police presence in the area whilst investigations are ongoing.

‘Specialist units have been deployed to both carry out enquiries, and to tackle this problem and prevent any further instances occurring.

‘I would encourage anyone who has any information which could be of assistance to please come forward.

‘We are particularly interested in finding out any information about the movements of the cars mentioned: the white Suzuki Splash, stolen from Denholm Terrace in the early hours of Wednesday, 16 September and set on fire in the early hours of Thursday, 17 September in Skye Street, and the small white car seen driving away at speed from the attack on Wellington Street around 11pm on Wednesday, 16 September.

‘If you do have any information, or if you may have seen anything or maybe have dashcam footage or private CCTV footage of any of the incidents, please contact police as soon as possible.’