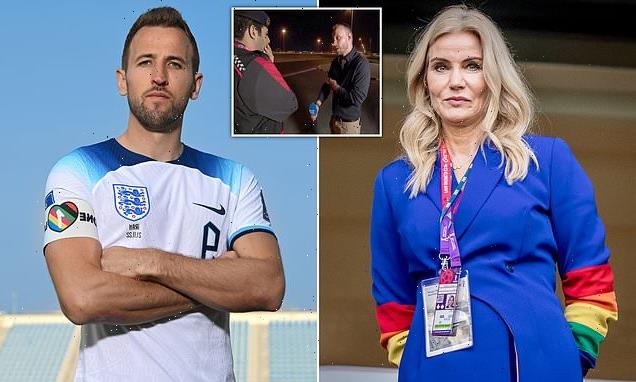 Denmark have proposed a blanket withdrawal from FIFA alongside other UEFA nations over the #OneLove armband row.

It was alleged today that the football governing body sent six officials to the England football team’s headquarters on the day of their Qatar World Cup match against Iran and threatened them with drastic sanctions if players wore the protest armbands.

The federations of England, Wales, Belgium, the Netherlands, Switzerland, Germany and Denmark decided to drop the pro-LGBTQ+ gesture amid threats of sanctions, which included an automatic yellow card for anyone wearing one.

Now, Danish officials have revealed they are considering leaving FIFA over the row and are willing to discuss the dramatic move with fellow UEFA member states.

Danish FA chairman Jesper Moller said, according to the Athletic: ‘It is not a decision that has been made now. We have been clear about this for a long time. We have been discussing it in the Nordic region since August. 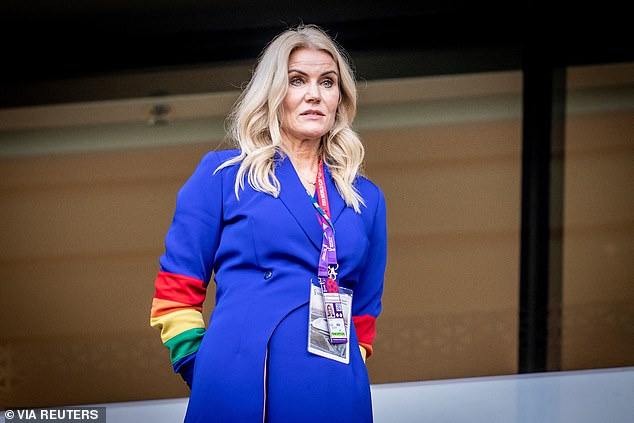 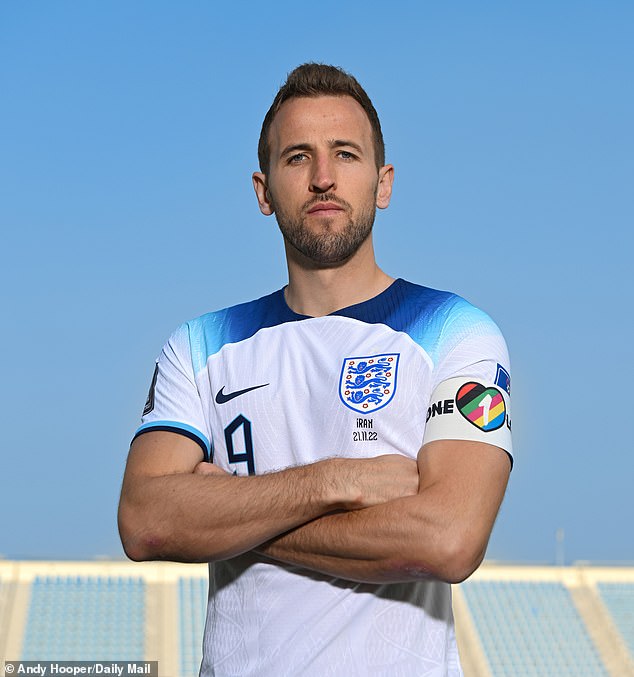 England’s football team had been planning to wear the LGBTQ+ armband along with other European teams such as Germany and Denmark before the campaign was dropped when FIFA threatened to hand out yellow cards to players. Pictured: Harry Kane wearing the rainbow armband 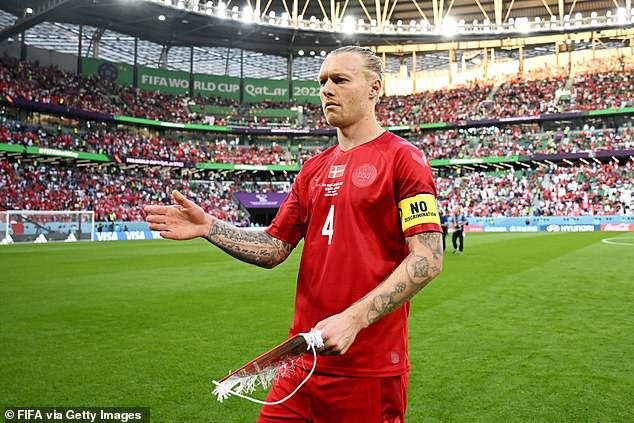 ‘I’ve thought it again. I imagine that there may be challenges if Denmark leaves on its own. But let us see if we cannot have a dialogue on things.

‘I have to think about the question of how to restore confidence in FIFA. We must evaluate what has happened, and then we must create a strategy – also with our Nordic colleagues.’

Today, Danish FA CEO Jakob Jensen said the yellow card would be the ‘minimum’ punishment they would have received.

He said: ‘On October 21, England asked for an emergency meeting with FIFA, who came to the English hotel. FIFA said it would at least give a yellow card.

‘There has been discussion about whether there is a legal basis for giving a yellow card, but there is.

‘The penalty could have been a yellow card, that the captain had not come on the pitch or that he was given a ban.’ 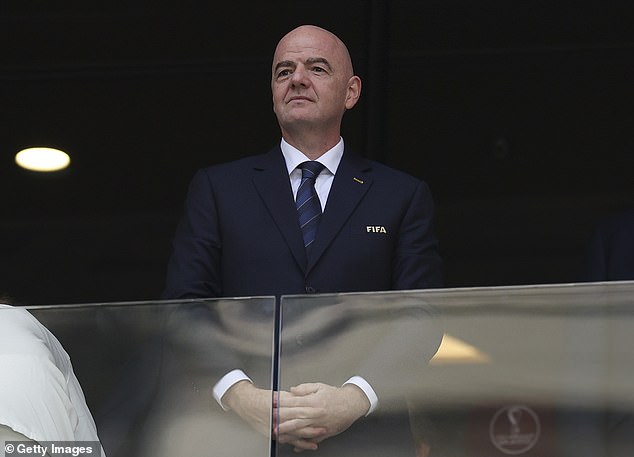 Gianni Infantino, who sparked fury with his bizarre comments on the weekend declaring he feels ‘gay’ and a ‘migrant worker’, is standing unopposed for reelection

Jensen said this caused ‘anger’ in the room and now he will drop his support for president Gianni Infantino in his reelection bid.

The FIFA president, who sparked fury with his bizarre comments on the weekend declaring he feels ‘gay’ and a ‘migrant worker’, is standing unopposed for reelection.

Moller added: ‘There are presidential elections in FIFA. There are 211 countries in FIFA and I understand that the current president has statements of support from 207 countries.

‘Denmark is not among those countries. And we’re not going to be either.’

The German Football Association (DFB) yesterday claimed that England and other teams were faced with ‘extreme blackmail’ or ‘massive sanctions’ that led to them dropping the gesture.

The DFB’s President, Bernd Neuendorf, said today that they had written to FIFA to get a written statement on what sanctions players could face.

Neuendorf confirmed that FIFA had told them the referee would have handed out a yellow card to players who wore the symbol on their arm.

He added that FIFA had threatened that they could escalate the issue to a disciplinary committee where further penalties could be imposed. 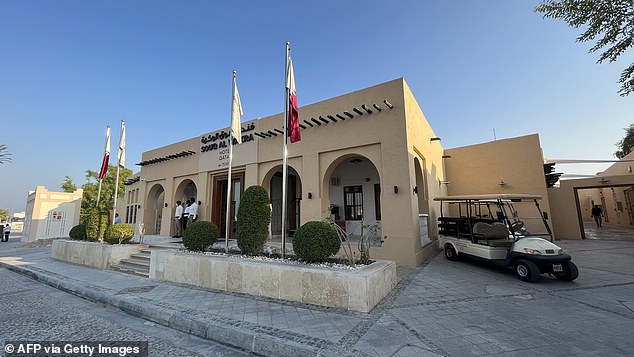 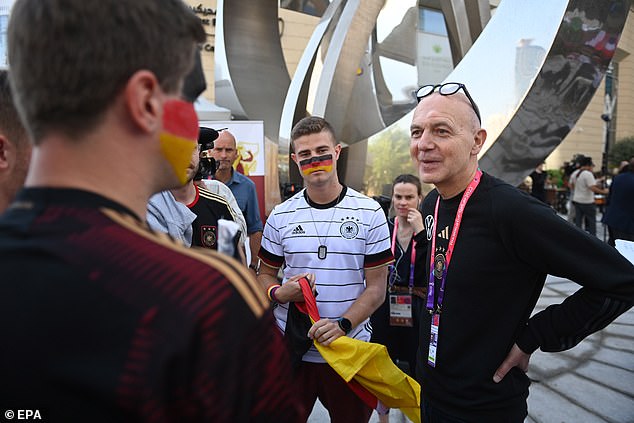 The DFB’s President, Bernd Neuendorf (pictured in Qatar today), said today that they had written to FIFA to get a written statement on what sanctions players could face

Neuendorf told BILD: ‘We wrote to Fifa before the game. We wanted binding, written statements: that the bandage is forbidden and what sanctions are to be feared.’

Neuendorf added: ‘Today we received an answer from Fifa that goes exactly in this direction.

‘That means the referee would have to react [with a yellow card]. In addition, FIFA has stated that it reserves the right to appeal to the Disciplinary Committee in the event of such ‘offences’, which could then impose further penalties.’

Despite FIFA’s threats, Germany’s Vice-Chancellor Robert Habeck encouraged his countrymen to wear the ‘OneLove’ armband as they prepare to face Japan at the World Cup today. MailOnline has contacted FIFA for comment.

‘I suppose you have to wear the armband now. I would maybe take my chances,’ Habeck told German public broadcaster ZDF on Tuesday evening.

‘I would be interested to see what the referee does when someone with the armband comes over,’ Habeck said.

The rainbow armbands had been viewed as a symbolic protest against laws in World Cup host Qatar, where homosexuality is illegal.

Denmark has been one of the most vocal opponents of the FIFA sanctions, and its former prime minister yesterday wore a rainbow outfit for her country’s World Cup with Tunisia.

Helle Thorning-Schmidt, 55, now a Danish FA official, sported a blue dress with rainbow sleeves to meet FIFA chief Gianni Infantino before the match and was also seen wearing the outfit in the stands during the game.

It came a day after she posted on Instagram wearing the OneLove armband- something that several teams were supposed to wear on the pitch.

Speaking to Danish publication NRK before Denmark’s first group game, the former Danish PM said that the fight for rights in football should not be given up.

The 55-year-old added that she thought the football federation in Denmark (DBU) had ‘fought a fair fight’ for the gesture to be given the green light.

The former PM, who is married to the son of former Labour leader Neil Kinnock, Stephen, also said:  ‘I spoke with activists from the LGBTQ + community in Qatar and I really had a good overview of the things that we can put in place to help them.

‘I fully support the seven teams who will not wear the armband in view of the heavy FIFA sanctions. The best thing we can hope for now is for one of the seven teams to win this cup.’ 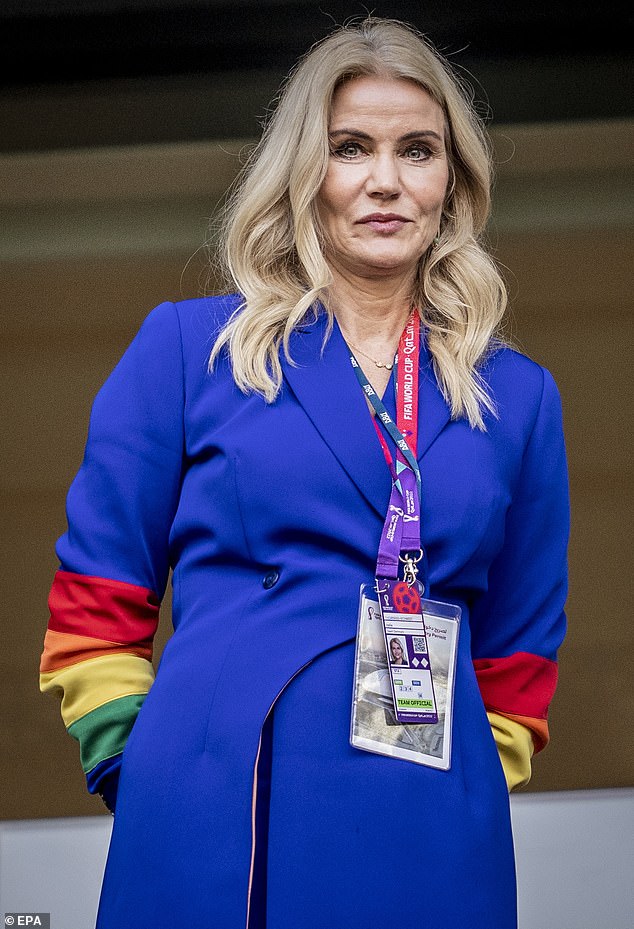 The 55-year-old watches the Denmark v Tunisia match in Qatar during the World Cup yesterday, pictured 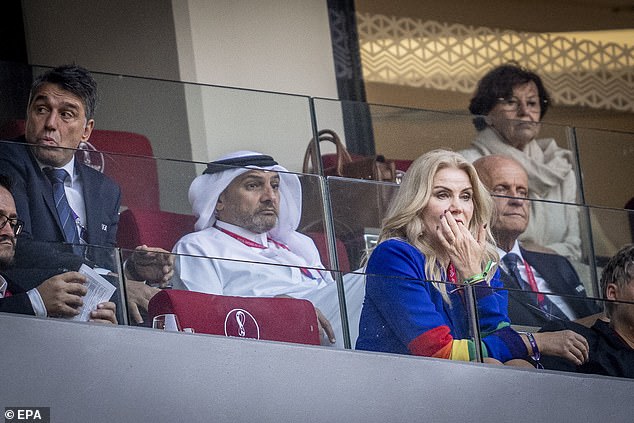 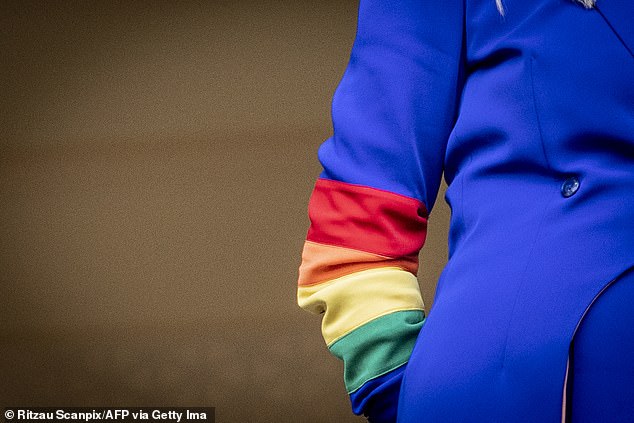 Speaking to Danish publication NRK before Denmark’s first group game, the former PM said that the fight for rights in football should not be given up. Pictured: The former PM’s rainbow coloured sleeves during the match yesterday 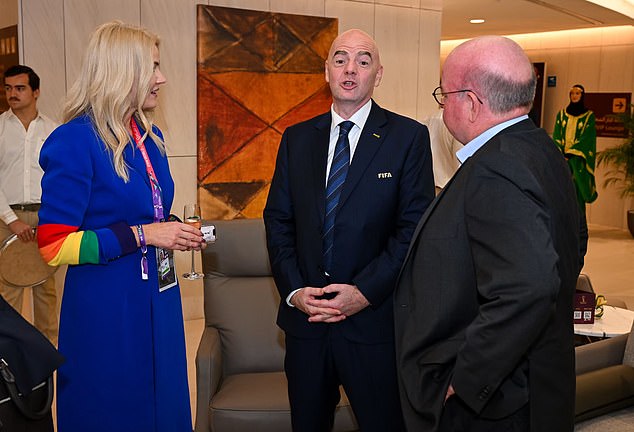 She was also seen meeting FIFA chief Gianni Infantino, pictured centre, in the outfit before the match 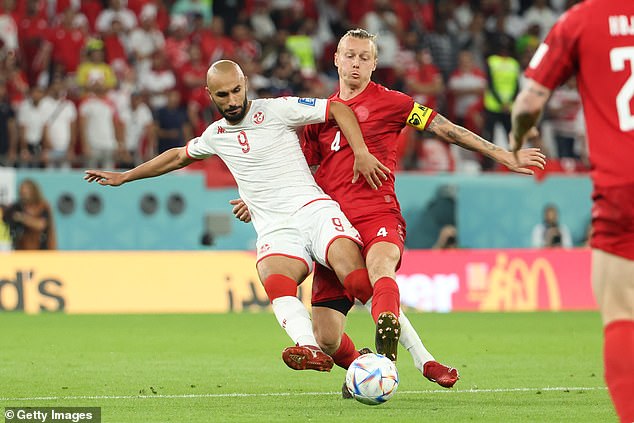 Also yesterday, a Danish reporter refused to remove his ‘OneLove’ anti-discrimination armband ahead of his live TV report when a Qatari official ordered him to.

Jon Pagh, a journalist for Danish broadcaster TV2, stood in defiance against the official and refused to adhere to his order to remove the anti-discrimination and LGBT rights symbol from his arm.

Pagh was getting ready to do a TV report about Denmark’s World Cup match against Tunisia when the Qatari official approached him and told him to remove the armband – but the Danish reporter refused.

Pagh’s refusal to remove the rainbow-themed armband came days after another Danish journalist from TV2, Rasmus Tantholdt, was forced off-air after Qatari security staff threatened to destroy his camera if he did not stop filming. 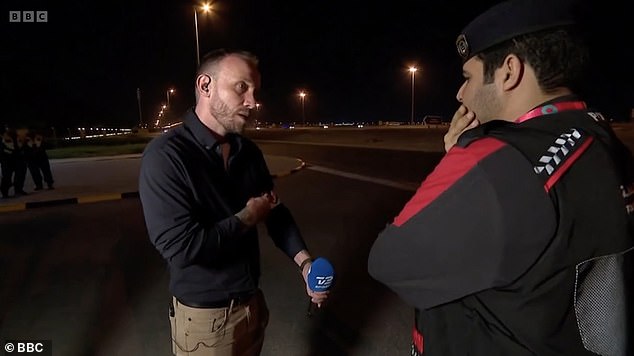 Jon Pagh, a journalist for Danish broadcaster TV2, stood in defiance against the official and refused to adhere to his order to remove the anti-discrimination and LGBT rights symbol from his arm

And now, in the latest example of Qatari officials cracking down on the media and those who wear the OneLove armband, Pagh was ordered to remove the symbol from his arm before starting a TV report.

In an exchange that was filmed by TV2 film crew, Pagh told the official: ‘I understand that you’re telling me that, but I can’t take it off.’

Pagh, reaching for his OneLove armband, asked: ‘Why is this not allowed?’

The official then said something to Pagh, but it is inaudible because he has his hand over his mouth.

Pagh responded: ‘It’s because of the colours? But this just says One Love.’

The Qatari official, becoming agitated, then told the TV crew to stop filming before thrusting his hand over the camera.

A defiant Pagh continued: ‘It just says one love. It’s respecting everybody. Look, I respect that you’re telling me this.’

The Qatari official then walked off, leaving Pagh looking at the camera with incredulity. 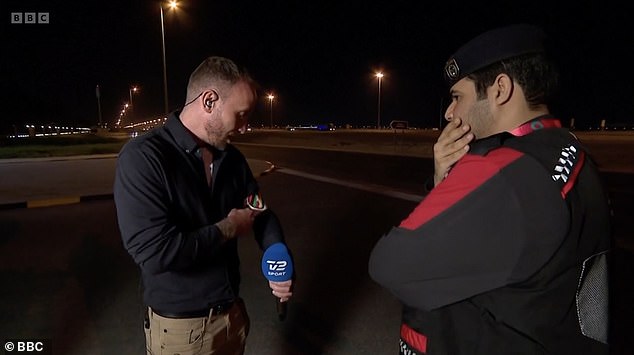 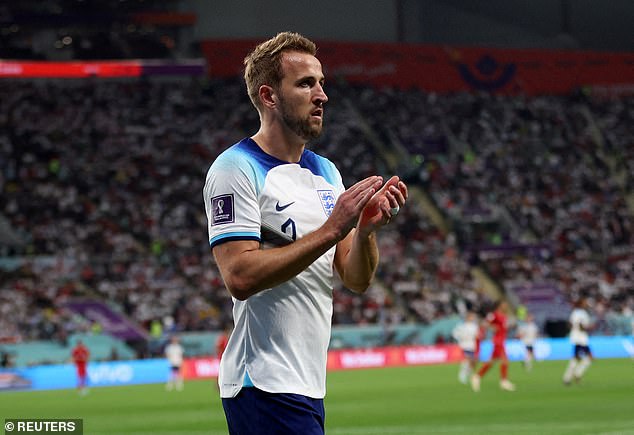 England captain Harry Kane, pictured, had been previously due to wear a OneLove armband before the FA threats

Previously, England captain Harry Kane, who was due to wear the armband before being threatened with a booking, said: ‘I am honoured to join my fellow national team captains in supporting the important OneLove campaign.

‘As captains we may all be competing against each other on the pitch, but we stand together against all forms of discrimination.

‘This is even more relevant at a time when division is common in society. Wearing the armband together on behalf of our teams will send a clear message when the world is watching.’

He had worn the armband during England’s Nations League fixtures in September.

Referees in the World Cup are not happy that they have been used as pawns in Fifa’s battle with European nations in the armband row.

Many of the 36 referees were astonished that they may be forced to book captains for wearing the symbol. 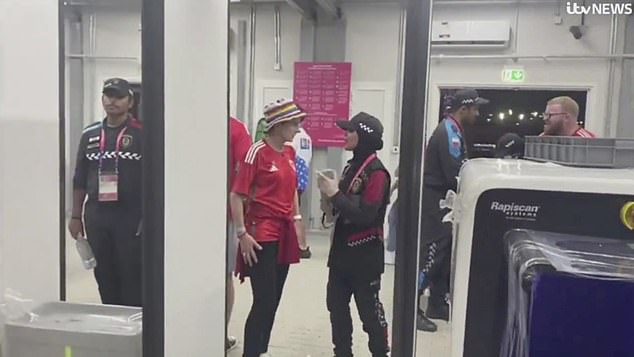 Meanwhile, Fifa has instructed security guards to allow rainbow symbols into stadiums. It came after former Wales captain Laura McAllister, pictured, and some LGBT supporters from the Rainbow Wall group were told to take off their bucket hats before the country’s match against the USA on Monday 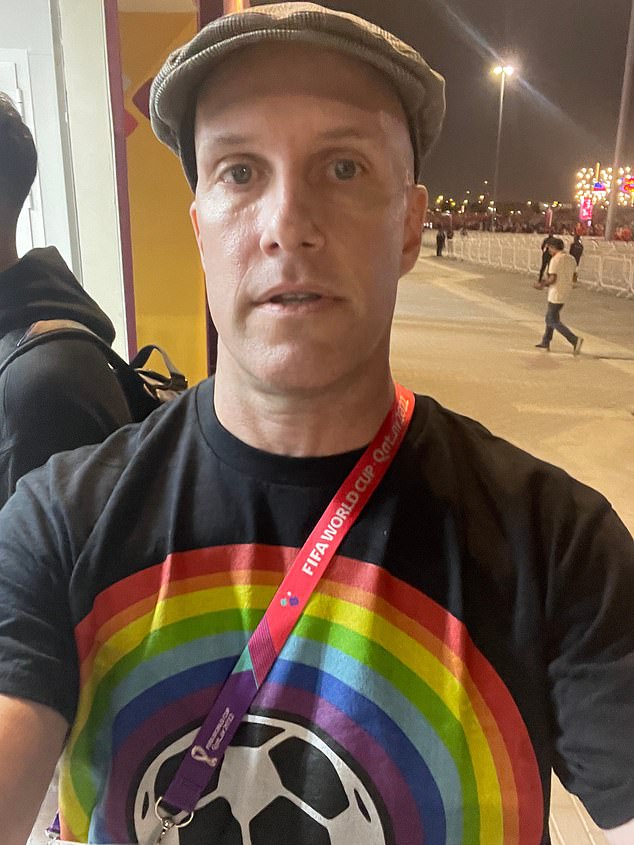 Another person was also told to take off their rainbow symbol before the match on Monday, American journalist Grant Wahl, pictured. He was detained by security personnel for wearing a rainbow t-shirt

Fifa did not get as far as instructing their officials to book players for wearing the armband, but told the European rebels that yellow cards would be issued at the start of matches to those who did so, leading some of the referees to claim privately that they have been used weapons in a political war without any consultation.

Meanwhile, Fifa has instructed security guards to allow rainbow symbols into stadiums. It came after former Wales captain Laura McAllister and other LGBT supporters from the Rainbow Wall group were told to take off their bucket hats before the country’s match against the USA on Monday.

Ms McAllister told ITV News: ‘While we were queueing we heard that people wearing a rainbow bucket hat had to take it off.’

Another person was also told to take off their rainbow symbol before the match on Monday, American journalist Grant Wahl. He was detained by security personnel for wearing a rainbow t-shirt.

And the Belgian federation was banned on Monday from wearing its ‘outside’ jersey. This has prints with the colours of the rainbow and the ‘Love’ on the colour.

The rainbow symbol is viewed as a pro-LGBT rights statement in a country where homosexuality is illegal.