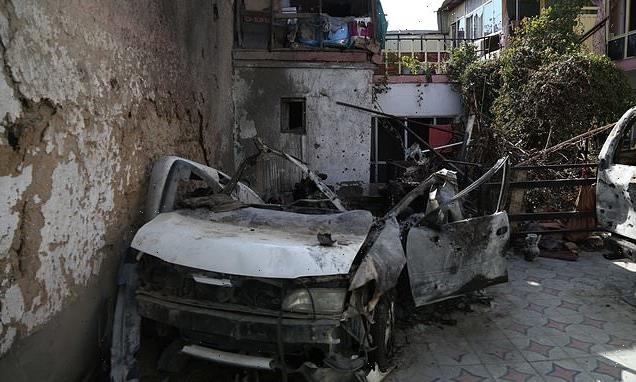 BREAKING NEWS: US drone strike in Kabul DID kill aid worker and nine members of his family including seven children, defense official says

The Pentagon has revealed the August 29 drone strike on a supposed ISIS-K operative instead actually killed an aid worker and 9 members of his family, including 7 children.

Head of US Central Command Gen. Frank McKenzie admitted the strike was a ‘terrible mistake’ while addressing reporters Friday and said it was ‘unlikely that the vehicle and those that died were associated w/ISIS-K or a direct threat to U.S. forces.’

‘It was a mistake and I offer my sincere apology,’ McKenzie said.

McKenzie said the movements of the aid worker, Zemari Ahmadi tracked with intelligence about ISIS plans for an attack at Kabul airport.

A drone had observed men loading what were thought to be explosives into Ahmadi’s vehicle, but were actually jugs of water. 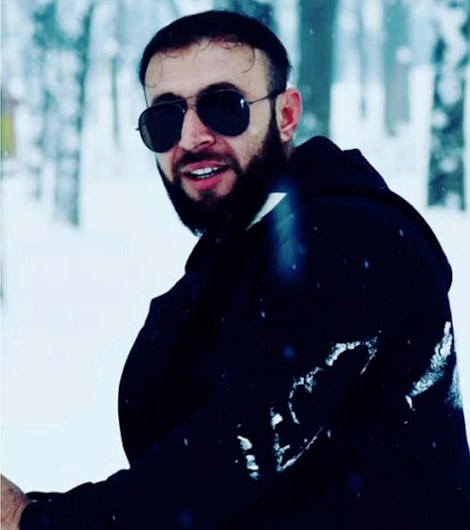 Aid worker Zemari Ahmadi, 43, was driving the 1996 Toyota Corolla that was destroyed in the August 29 drone strike

The deadly drone strike set off a large secondary explosion, which officials originally claimed was evidence the car was indeed carrying explosives, but an investigation determined was likely a propane tank located in the driveway.

‘I offer my profound condolences to the family and friends of those who were killed. The strike was taken in the earnest belief that it would prevent an imminent threat to our forces and evacuees at the airport,’ McKenzie continued. ‘But it was a mistake and I offer my sincere apology, as the combatant commander, responsible for this strike and this tragic outcome.’

He said the Pentagon is considering reparations for the family of the victims.

The New York Times, relying on family accounts and local surveillance footage, first reported that the vehicle struck belonged to Ahmadi, a 43-year-old aid worker who worked with the US, and he and nine of his family members were blown to bits.

Ahmadi, 37, had been loading the water jugs into his car to bring home to his family. As he pulled into the driveway of the home he shared with his family and three of his brothers’ families, several of his children and his brothers’ children ran out to greet him, according to family members, when a US commander launched a Hellfire missile onto the vehicle.

Asked if anyone would be held responsible for what he called a ‘tragic mistake,’ McKenzie said there is an investigation ongoing internally about it.

McKenzie said that leaders on the ground in Afghanistan had their hands full juggling 60 different intelligence tips related to imminent threats. ‘

One of the most recurring aspects of the intelligence was that ISISK would utilize a white Toyota Corolla as a key element in the next attack.’ Ahmadi’s vehicle was a white 1996 Toyota Corolla.

‘It is further my assessment that the strike team at the time of the strike was convinced the area was clear of civilians and they had taken prudent steps in weaponeering the strike to minimize civilian casualties,’ he continued. 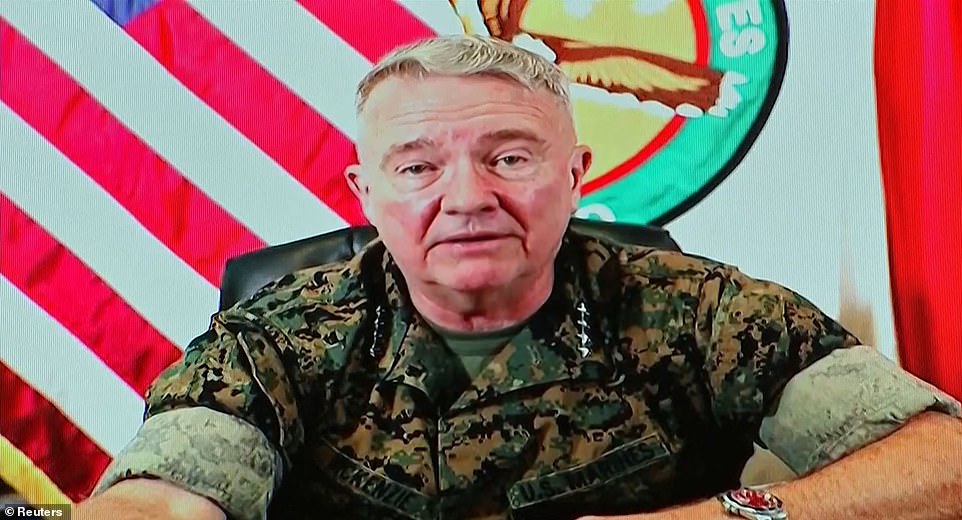 ‘It was a mistake and I offer my sincere apology,’ Head of US Central Command Gen. Frank McKenzie said 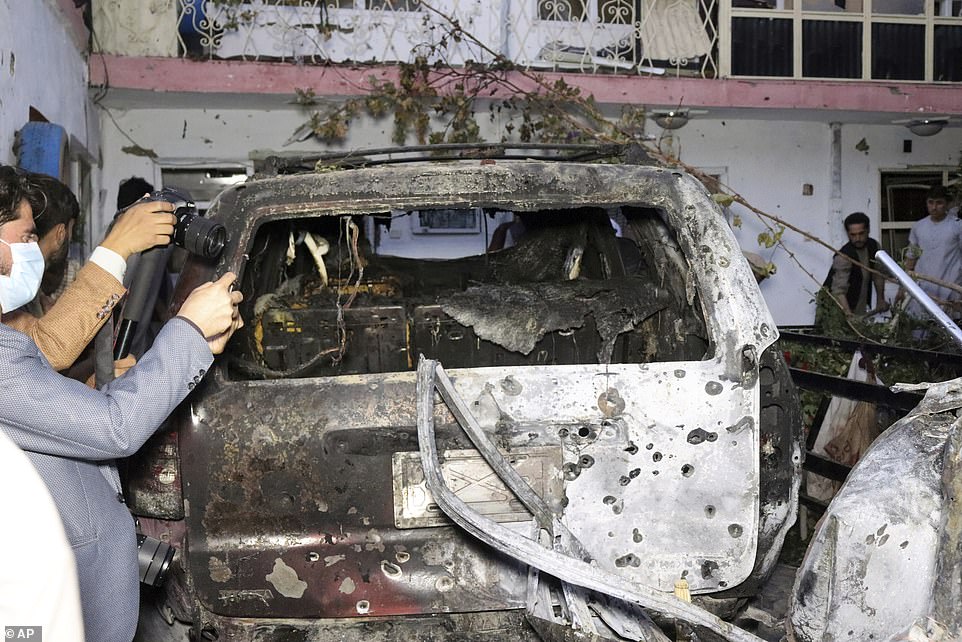 Ahmadi had been loading the water jugs into his car to bring home to his family. As he pulled into the driveway of the home he shared with his family and three of his brothers’ families, several of his children and his brothers’ children ran out to greet him 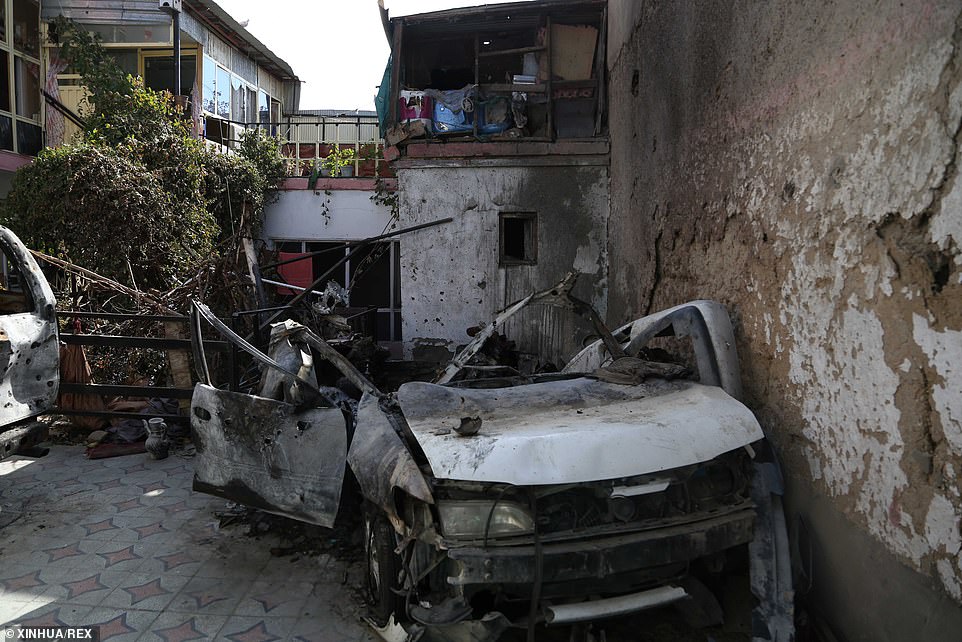 A damaged vehicle is at the site of the U.S. airstrike in Kabul, capital of Afghanistan

The Pentagon for weeks maintained that only three civilians had died.

Days after the attack, President Joe Biden gave a speech in which he marked the withdrawal of American troops in Afghanistan by the August 31 deadline. He touted America’s ability to strike terrorists and targets without boots on the ground. But he failed to mention the high civilian casualty rate from the August 29 drone strike, and he failed to mention that children had been killed.

‘We struck ISIS-K remotely, days after they murdered 13 of our service members and dozen of innocent Afghans. And to ISIS-K, we are not done with you yet,’ he said in his speech.

‘All of them were innocent,’ Ahmadi’s brother Emal told the Times, noting that Ahmadi had sought refugee status with the US based on his international aid work. ‘You say he was ISIS, but he worked for the Americans.’

‘This was a righteous strike,’ Joint Chiefs Chairman Mark A. Milley insisted earlier this month, claiming that Ahmadi was an ‘ISIS facilitator.’

Milley offered an updated statement on Friday: ‘In a dynamic high threat environment, the commanders on the ground had appropriate authority and had reasonable certainty that the target was valid but after deeper poststrike analysis our conclusion is that innocent civilians were killed.’ 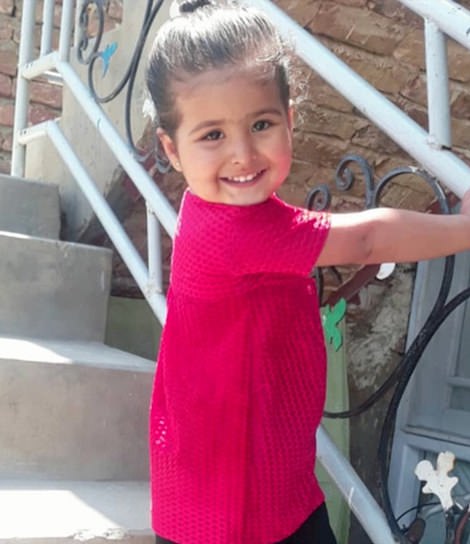 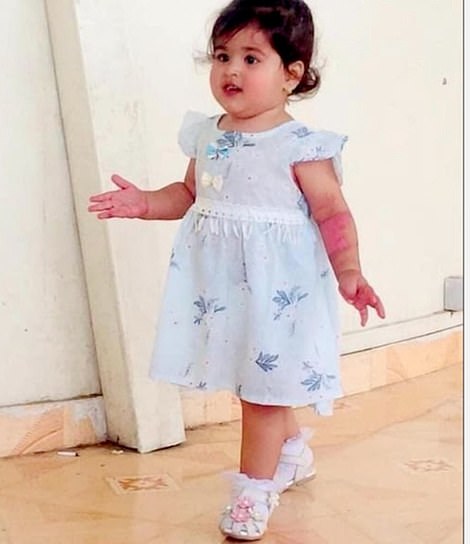 Emal Ahmadi, another relative of the strike’s victims, told the BBC that his two-year-old daughter who was killed in the strike while the family were waiting for a phone call from US personnel instructing them to go to the airport for evacuation 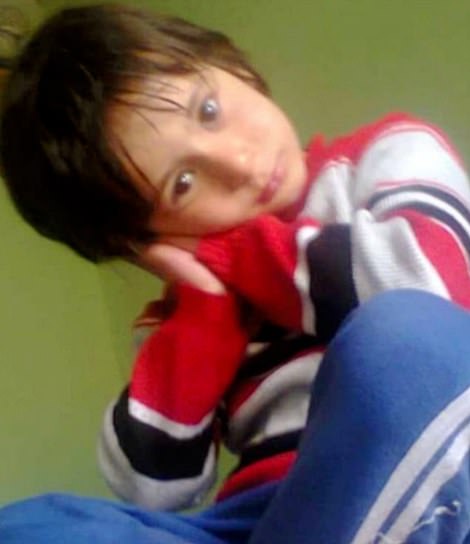 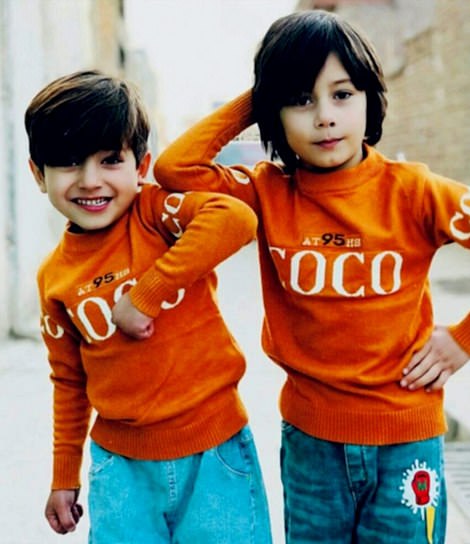 12-year-old Farzad Ahmadi was among the oldest of the children killed according to Ramin Yousufi, a member of the family who vilified the US strike as a ‘brutal attack which happened based on wrong information’ 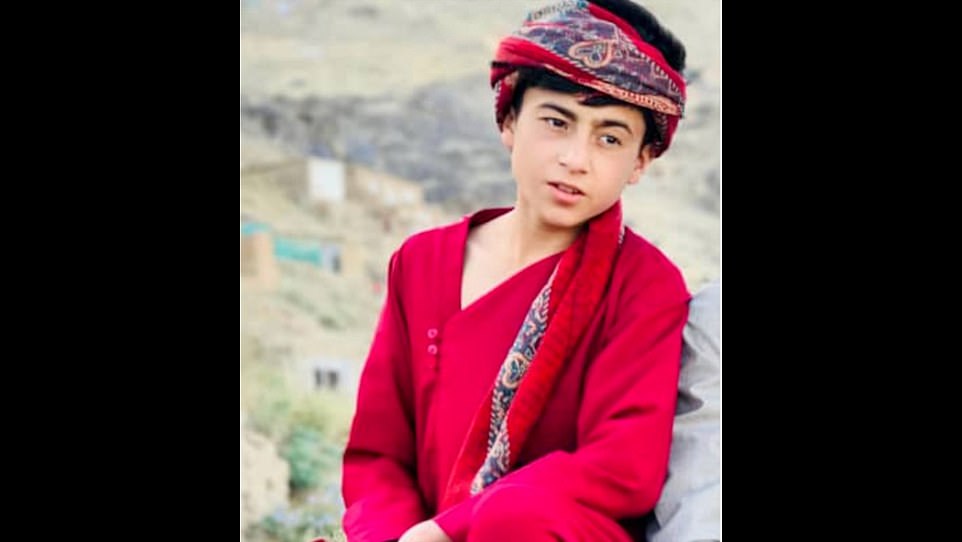 Faisal Ahmadi, 16, was among the seven children who witnesses say were killed in the strike 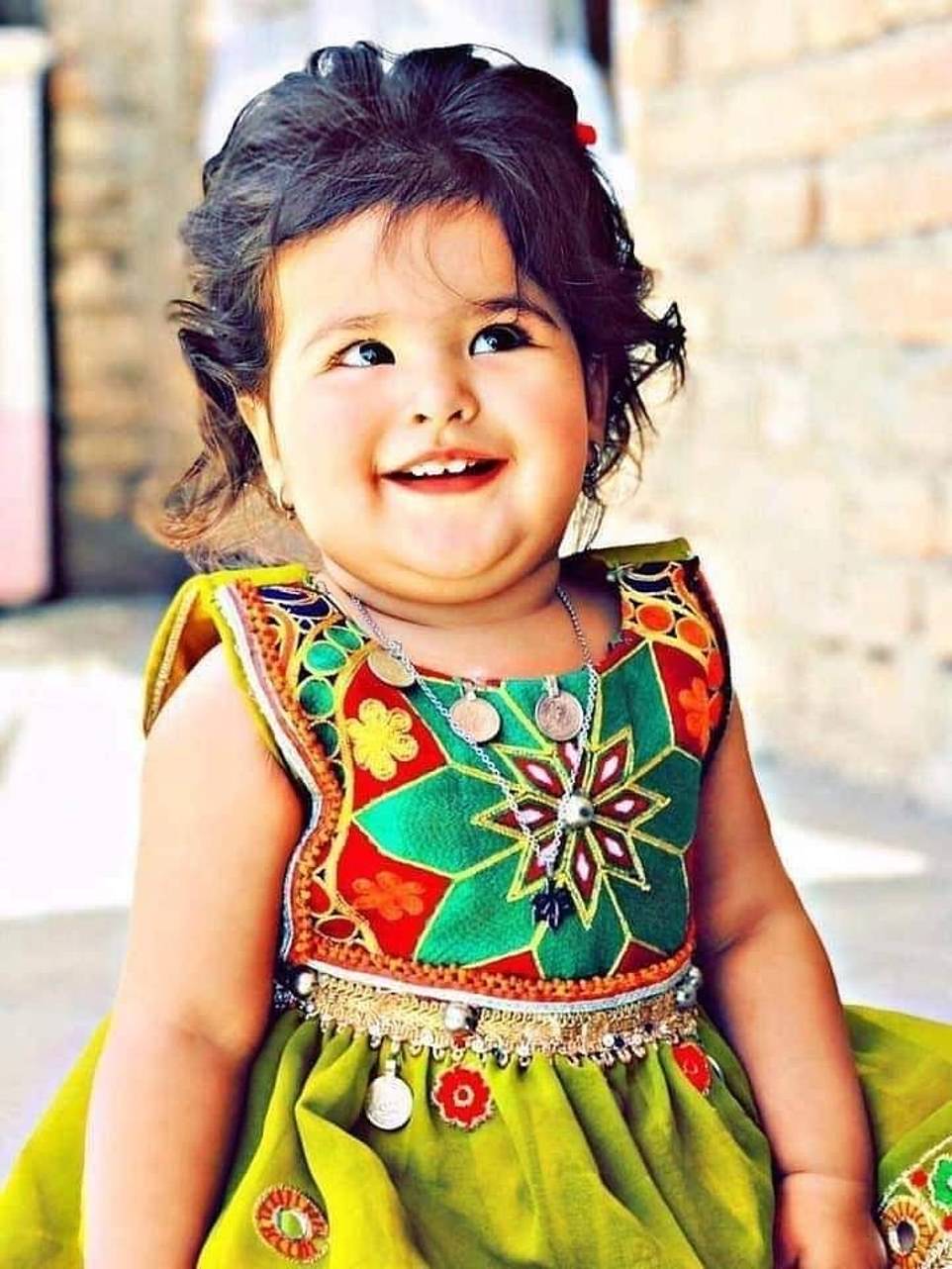 Somaya, two, was one of the youngest killed in the strike

In a statement to DailyMail.com last Friday, Pentagon Press Secretary John Kirby stood by the intelligence assessment that led to the strike, but did not deny there were civilian casualties.

‘U.S. Central Command continues to assess the results of the airstrike in Kabul on August 29. We won’t get ahead of that assessment,’ said Kirby.

‘However, as we have said, no other military works harder than we do to prevent civilian casualties,’ he added.

‘Additionally, as Chairman Milley said, the strike was based on good intelligence, and we still believe that it prevented an imminent threat to the airport and to our men and women that were still serving at the airport,’ the spokesman said.

According to the Times, killed in the drone strike were Ahmadi and three of his children, Zamir, 20, Faisal, 16, and Farzad, 10; Ahmadi’s cousin Naser, 30; three of Ahmadi’s nephews, Arwin, seven, Benyamin, six, and Hayat, two; and two three-year-old girls, Malika and Somaya.

The drone strike in Kabul came as US forces were on high alert following an ISIS-K suicide blast on August 26 that killed 13 US troops and scores of Afghans on August 26.

A separate US drone strike in remote Nangarhar Province on August 27 killed two alleged ISIS-K planners and facilitators, according to the Pentagon, though their identities have not yet been publicly confirmed.

On the morning of August 29, Ahmadi left his family home a few kilometers west of the Kabul airport at around 9am. It was around this time that US officials tell the Times that his car came under surveillance.

An MQ-9 Reaper drone tracked Ahmadi’s Corolla as he went about his day, picking up two passengers and the laptop from the home of N.E.I.’s country director on his way to work.

The Pentagon claims that the vehicle was tracked after leaving a known ISIS-K safehouse, but it is unclear whether this refers to Ahmadi’s home or one of his stops on the way to work.

However, an improvised rocket attack on the Kabul airport was launched from a car near the home of the non-profit director the morning after the drone strike. The Times visited the director, who said he had nothing to do with ISIS and had his own refugee resettlement case pending in the US.

Witnesses say he and his co-workers went to a Taliban-controlled police station that morning to request permission to distribute food to displaced refugees living in a nearby park. 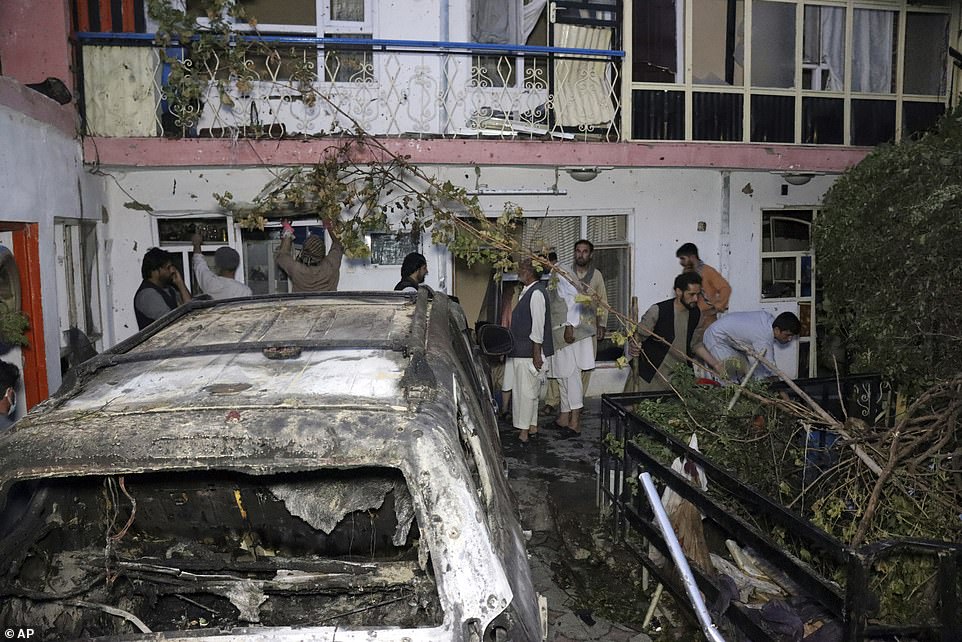 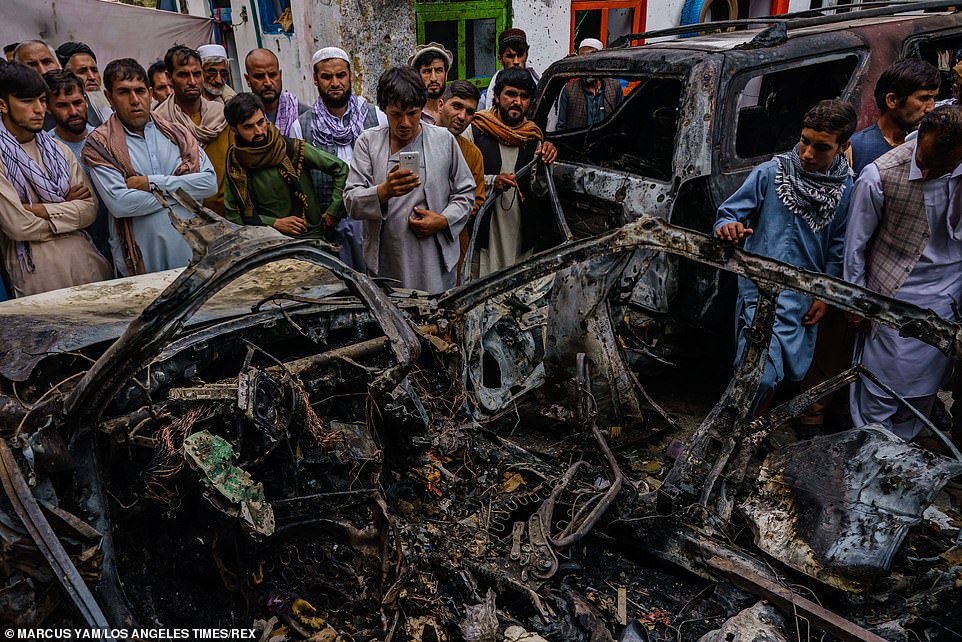 Expert analysis of photos of the scene show no evidence of a second blast, as the Pentagon claims 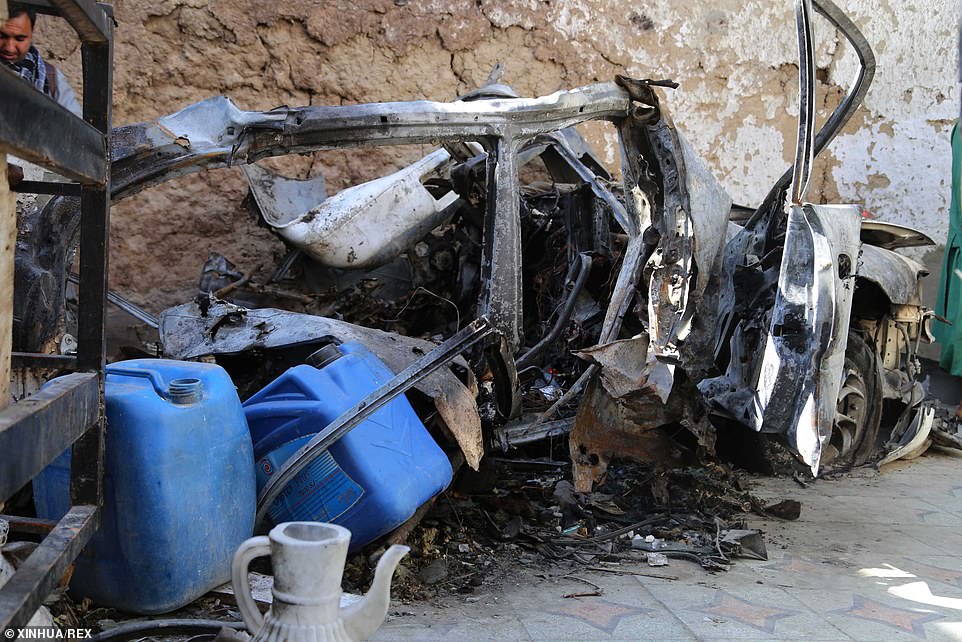 An MQ-9 Reaper drone tracked Ahmadi’s Corolla as he went about his day, picking up two passengers and the laptop from the home of N.E.I.’s country director on his way to work 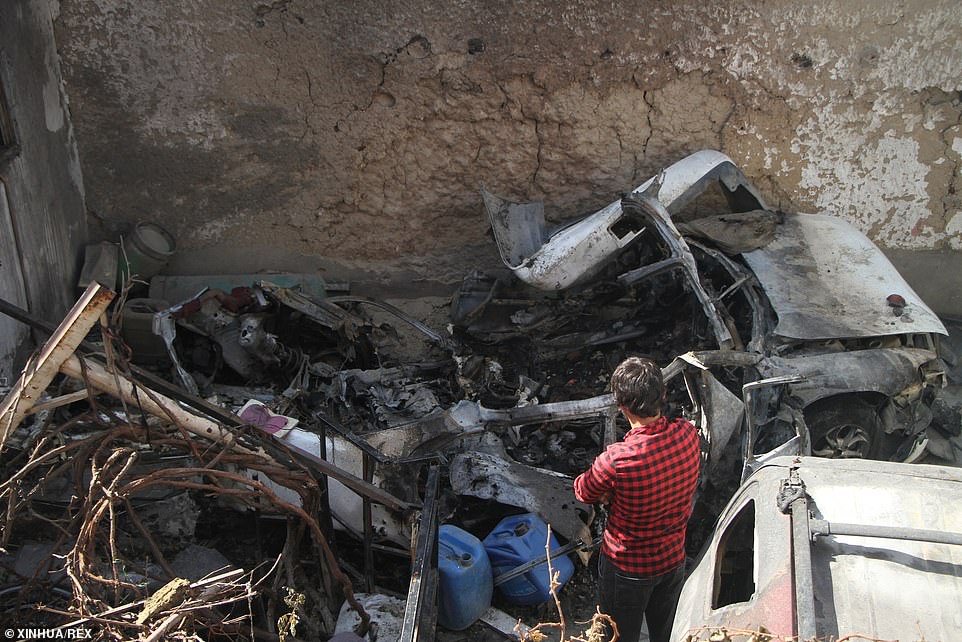 They returned to the offices at around 2pm, and surveillance footage shows that Ahmadi began filling up water jugs with a hose, which his family say he brought home from the office after water service was cut off in their neighborhood.

‘I filled the containers myself, and helped him load them into the trunk,’ a guard at the office told the Times.

Meanwhile, US officials say that their surveillance drone tracked Ahmadi to a compound eight to 12 kilometers southwest of the airport, where he was observed loading heavy packages into the car.

The location matched the offices of N.E.I., a California-based non-profit that promotes the cultivation of soy crops in Afghanistan. Witnesses say Ahmadi loaded nothing into his car other than the water jugs in the trunk and two laptops in the passenger compartment. 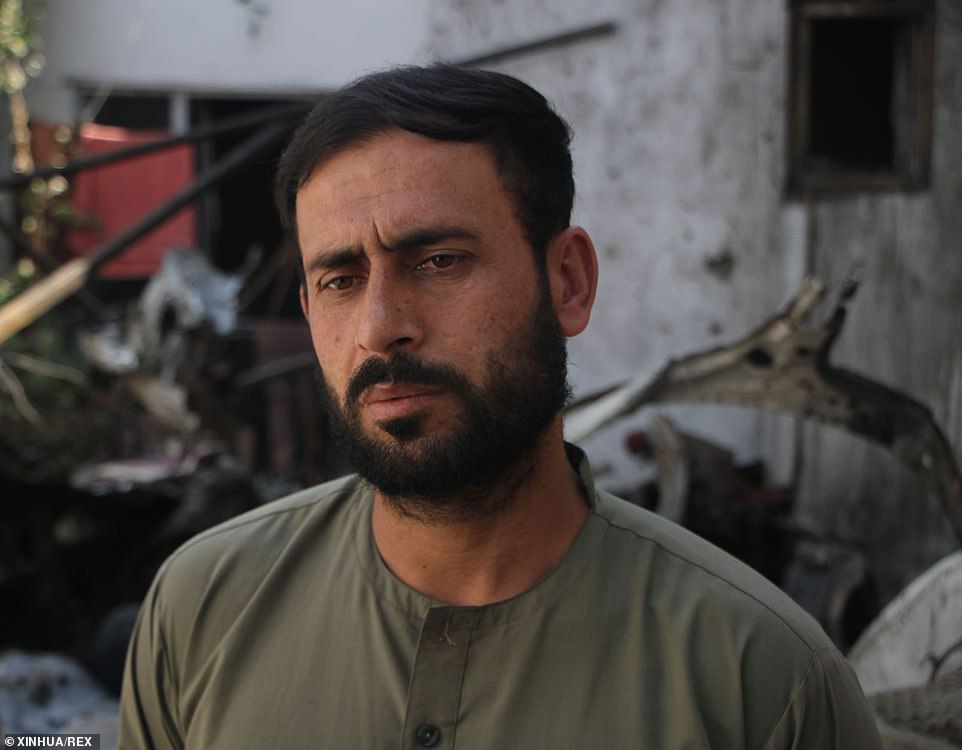 Emal Hamedi, a survivor of the U.S. drone strike, is seen at the site of the attack in Kabul 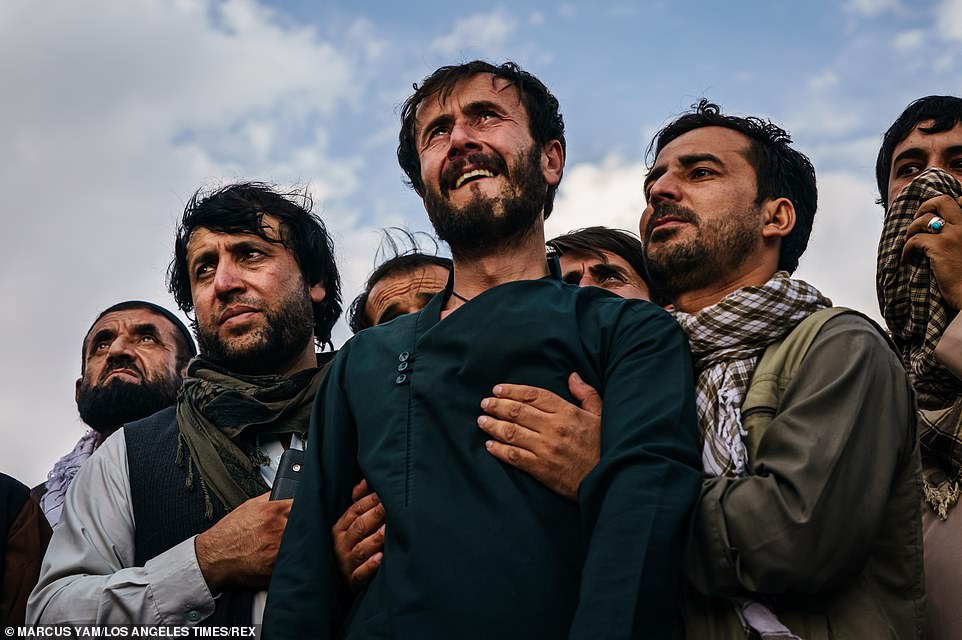 Ramal Ahmadi, centre, is supported by family members at the mass funeral of the 10 victims killed in the drone strike 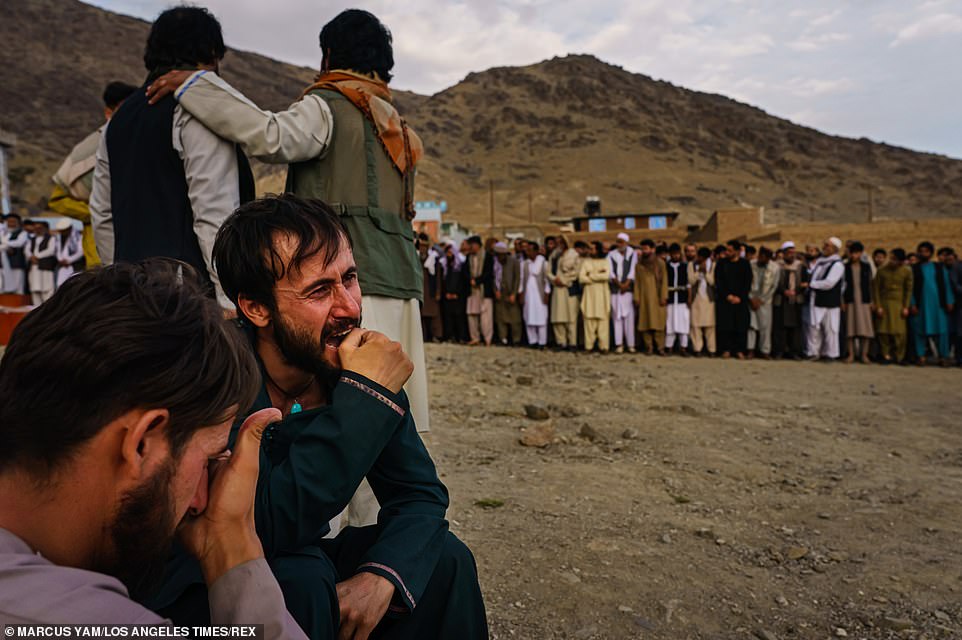 Ramal Ahmadi, second from left, weeps uncontrollably at the mass funeral attended by dozens of friends and family

Leaving work, gave his two co-workers rides home. They told the Times that it was a normal commute, except that Ahmadi did not turn on his car radio to listen to pop music as normal, for fear of running afoul of the Taliban.

When Ahmadi arrived home, his children, nieces and nephews ran out of the house to greet him, some of them piling into the car as he backed it in to the gated courtyard, according to witnesses.

US officials say that operator of the Reaper drone quickly scanned and saw only a single adult male greeting the vehicle, and therefore assessed with ‘reasonable certainty’ that no women, children or noncombatants would be killed.

A Hellfire missile struck the Corolla before its engine shut off.

Ahmadi’s brother Romal was sitting on the ground floor with his wife when a sudden blast blew out the windows. They ran outside to discover a scene of devastation and death.

Six of those who died were inside the car, the others were in the garden of the home in the tightly-packed Khajeh Baghra neighbourhood.

Samia Ahmadi told the New York Times she was in a room next to the courtyard when she was struck by the impact of the blast and, at first, ‘thought it was the Taliban’.

She staggered outside where she was greeted by the dismembered bodies of her family members. ‘I saw the whole scene,’ she said, weeping over the death of her cousin and fiancé Naser.

‘America used us to defend itself, and now they’ve destroyed Afghanistan,’ she said. ‘Whoever dropped this bomb on our family, may God punish you.’

Pentagon officials, including General Milley, insist that there was a second blast after the missile strike, proving the vehicle carried explosives.