The chair of the country’s largest superannuation fund has warned the Coalition’s super-for-housing policy will reduce investment returns and push up house prices.

Prime Minister Scott Morrison on Sunday announced a controversial policy for first-home buyers to use $50,000 from their superannuation to fund a housing deposit if voters give his government another term in power. 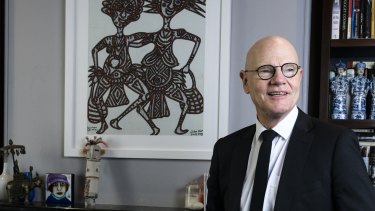 AustralianSuper chair Don Russell, who served as the right-hand man to former prime minister and architect of compulsory superannuation Paul Keating, said the policy failed “on all scores” to improve economic outcomes for Australians.

“It will have a debilitating effect on the retirement balances of people when they get to their 50s and 60s,” he said. “You’re not doing anyone any favours in terms of improving their overall wealth, while facilitating the natural temptation to have money now as opposed to later.”

Russell said the Australian housing market was “among the most distorted in the world” through tax concessions, and pumping more money into the system will only push prices up more, mirroring the New Zealand market of “shocking” house price spirals.

Russell said Australians already used superannuation to access housing, with higher balances making it easier to secure a loan or pay off the mortgage later in life. “It’s a mistake to think that the superannuation balances, if they stay in the super system, aren’t helping people buy houses.”

The proposed scheme will result in lower returns for all Australians, Russell said, because it will dismantle compound interest and push super funds towards low-return, liquid assets such as cash and shares instead of unlisted higher-return assets, such as infrastructure and property. “We’re long-term investors. That’s the magic behind the higher returns that super funds can deliver.”

Deloitte’s superannuation expert Russell Mason said he did not think the scheme would have an impact on fund’s investment strategies because most funds had strong cash flows and would only need to increase the allocation to cash by 1 to 2 per cent.

“I don’t think there will be that huge demand across the system that it will cause problems with cash flow,” he said. “Although funds and the government need to educate members as to the full consequences of taking down up to $50,000 out of their super, what it means to rebuild that money. That’s an important consideration, it’s huge and will take a long time to rebuild.”

Mason said the early release scheme during COVID-19 showed super funds had been able to adjust systems to cope well and did not suffer any cash flow problems.

Jana chief executive Jim Lamborn, whose consulting firm provides investment advice to retail and industry funds, agreed the scheme would lead to lower returns for all Australians, including those that do not make early withdrawals for housing deposits because funds would be forced into conservative investment strategies.

“You can’t have both. You can’t be expecting illiquidity premiums and delivering strong long-term returns, and also allow a certain cohort to access super early,” Lamborn said. “This scheme has the potential to erode a very successful public policy.”

Former IFM chief executive Brett Himbury, who now serves as chair of Stafford Capital, said the proposed scheme would have flow-on effects for the Australian economy by diverting funds away from infrastructure projects, like airports and hospitals.

“This policy encourages investment into less productive assets, such as housing, which is not good for productivity and jobs growth of this country.”

Hostplus chief executive David Elia, whose industry fund represents younger Australians working in hospitality and tourism, said his fund would need to change its asset allocation, which would decrease investment in venture capital “to build our future economy”.

Former IFM chair Garry Weaven said the super-for-housing scheme had circulated policy circles for more than 20 years but had been rejected for its potential to drain retirement savings, increase property prices and decrease investor certainty.

“Many of the politicians now think the most important thing on earth is to keep their bum on the seat. It’s nothing to do with good policy.”

The Market Recap newsletter is a wrap of the day’s trading. Get it each weekday afternoon.